16 Iconic Newspaper Covers That Went Down in History

Memorable news events mean memorable newspaper covers. Here are 16 of the most iconic front-pages from the past century.

The power of print

In this digital age, it’s all too easy to overlook what it’s like not just to read words, but to hold them in your hand in newsprint. As these iconic front page covers show, the pen—and paper—is mightier than the sword. Just like the true story behind 23 of the most iconic photos in American history, there is a lot more to these newspaper stories than meets the eye, but the covers themselves have made history.

Kennedy is Killed by Sniper as He Rides in Car in Dallas; Johnson Sworn in on Plane

The day President John F. Kennedy was assassinated changed the course of American history, and the newspaper headlines including this one from The New York Times on November 22, 1963, reflected that. According to Paul Levinson, PhD, professor of communication and media studies at Fordham University in New York City, people already heard the news via TV and radio reports, but seeing it in the permanency of a newspaper headline brought home this tragedy as not just a bad dream, bit all too real and permanent.” There are still many unanswered questions around the Kennedy assassination.

Long before Barack Obama made history as the first African-American president of the United States, Coleman Young was making headlines in Detroit when he was elected mayor as noted by this headline from the Detroit Free Press on November 6, 1973. According to Michael Stauch, PhD, assistant professor at The University of Toledo’s Department of History, Young’s election signaled a turning point in several significant strands of U.S. history, including being an important goal of the Black Freedom Struggle. “Alongside Coleman Young, African Americans at this time achieved executive office in some of the nation’s largest and most influential cities, including Los Angeles, Atlanta, and Newark, as well as in hundreds of smaller cities across the country,” Stauch tells Reader’s Digest. Once in office, many of these elected officials participated in a second important area of U.S. history: police reform. “Police reform was central to Young’s electoral success,” he says. “Once elected, Young quickly moved to introduce a series of reforms; among the most significant were an affirmative action hiring policy and a residency requirement for officers.” Take a look at these rarely seen photos you won’t find in history books.

In a speech on October 29, 1975, President Gerald Ford denied the federal assistance necessary to spare New York from bankruptcy. The following day, the front page of The Daily News read: “FORD TO CITY: DROP DEAD.” Though he didn’t actually say those words, his remarks were not particularly well-received. “The story behind this headline was that it was originally supposed to be much stronger, and indeed obscene,” Levinson explains. “But this did the trick and provides a classic example of how a headline can characterize the news and put a spin on it, rather than merely summarize events.” These are other presidential “facts” that aren’t true, either.

© The New York Times via Library of Congress

In this case, the original headline for the first edition of The New York Times on July 21, 1969, read “Men Land on Moon” when it went to press at 9.30 p.m. It was then updated at 10:58 p.m. to read “Man Walks on Moon,” at which point Neil Armstrong actually made it onto the moon, but Buzz Aldrin hadn’t yet. Finally. When the late city edition went to press at 12:46 a.m.—and both astronauts had walked on the moon—the headline was changed again to “Men Walk on Moon.”

“[This] shows how newspapers can reconsider and perfect their headlines for even the most momentous events,” Levinson explains. “Also, in this case, it shows how headlines bring events of cosmic importance literally down to Earth.” Though no women have ever walked on the moon, the women of NASA have achieved quite a lot.

5 Shot Dead at The Capital

Although mass shootings are common in the news cycle, one incident from 2018 made for a particularly memorable front page. After an armed gunman stormed into the offices of The Capital newspaper in Annapolis, Maryland, killing five staff members and injuring two others, the surviving members of the news team covered the event in the following day’s newspaper on June 29, 2018. In fact, even as the shooting was going on, the publication’s crime reporter covered the event while hiding under his desk. Find out 10 undeniable facts about mass shootings in America.

Time to Face the Past

In an unusual move for a newspaper, The Montgomery Advertiser issued a news article and an editorial on April 28, 2018, apologizing for its coverage of the lynchings of African-Americans over the past decades. “We take responsibility for our proliferation of a false narrative regarding the treatment of African-Americans in those disgraceful days,” the editorial read. “The Advertiser was careless in how it covered mob violence and the terror foisted upon African-Americans from Reconstruction through the 1950s. We dehumanized human beings. Too often we characterized lynching victims as guilty before proven so and often assumed they committed the crime.” The front page of the newspaper contained not only the powerful editorial but also the names of some of the victims of the lynchings. These are more messed-up history facts you’ll really wish weren’t true.

When this story was initially reported in The New York Times on June 29, 1914, no one could have predicted that it would lead to a war with approximately 20 million civilian and military casualties, and around 21 million wounded. When Archduke Franz Ferdinand and Duchess Sophie Chotek were shot in Sarajevo, it ultimately triggered a chain of events that resulted in World War I. This front page conveys the magnitude of this major world event. Test your knowledge of history with these tricky U.S. war questions no one ever gets right.

Elections are notoriously unpredictable. And on November 3, 1948, the Chicago Daily Tribune learned that the hard way when it printed a newspaper with the headline “Dewey Defeats Truman” before the election results were official. Of course, that ended up being completely incorrect: President Harry S. Truman defeated his challenger Thomas Dewey by a margin of 303 to 189 electoral votes. Two days after the election, Truman gleefully posed with the erroneous headline in a now-iconic photo. Just like Dewey “defeating” Truman, these 9 famous history moments that never actually happened. 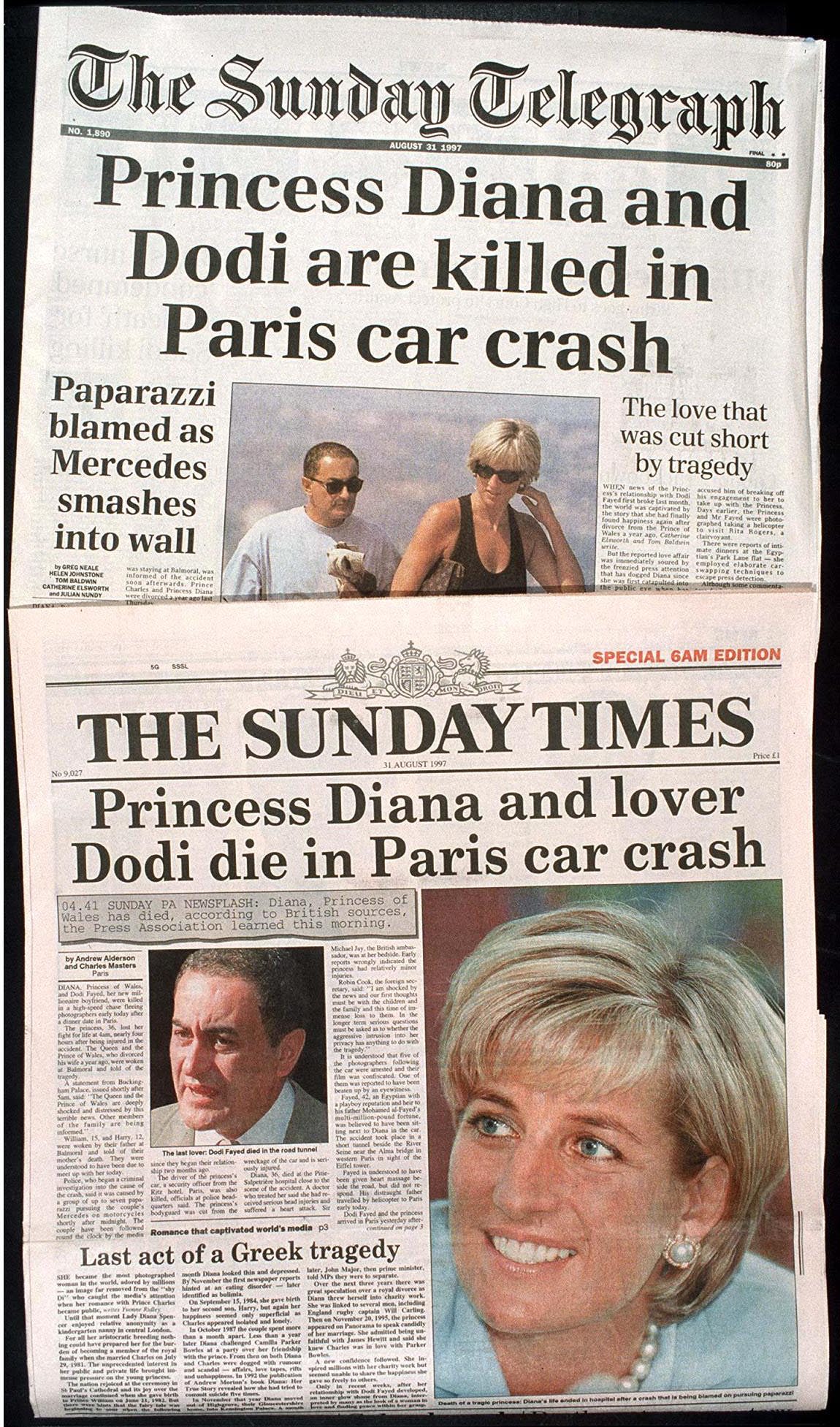 The death of a well-known member of the British royal family is always big news, but when it involved the “People’s Princess” being killed suddenly at the age of 36 it was something else entirely. When Diana, Princess of Wales and her romantic partner Dodi Fayed got into a fatal car accident in Paris in August, 1997, it made headlines around the world. One of the most memorable newspaper covers came from The Sunday Times of the United Kingdom on August 31, 1997. And now, more than 20 years since the fatal car accident, there are still several conspiracy theories that surround her death.

It’s hard to single out one of the jubilant newspaper covers proclaiming the end of World War II, but this one from Sydney’s newspaper The Sun on August 15, 1945, stands out for its giant font and concise headline. Despite that it happened nearly 80 years ago, conspiracy theories about the Pearl Harbor bombing still abound.

The events of September 11, 2001 shook the entire world, but the front page of the following day’s USA Today stands out for the amount of information it’s able to convey on one cover. The headline is simple and straightforward, and then the bulleted subheadings provide additional, but concise, details. The two photos included are some of the most iconic from the day: one of the Twin Towers on fire, and the other of President George W. Bush learning about the attacks. Even 17 years later, questions remain about what really happened that day.

When Barack Obama defeated his Republican challenger Senator John McCain in November 2008 and was elected president of the United States, it was historic for several reasons. Not only was he the first African-American president, but his campaign demonstrated the importance of engaging young people and using social media. The morning after the election on November 5, 2008, The New York Post opted for a large photo of Obama’s smiling face with the simple headline “Mr. President,” which remains one of the most memorable newspaper covers of the 21st century. Obama did not look the same when he left office in 2017 as these dramatic before and after photos show.

© The Plain Dealer via Library of Congress

In the spring of 1970, a group of students at Kent State University — located just south of Cleveland, Ohio — were demonstrating against the Vietnam War when members of the Ohio National Guard fired into the crowd, killing four students and injuring several more. This event set into motion a nationwide student strike at other universities. The cover of the next day’s Cleveland Plain Dealer provided a glimpse into the terror on campus that day, showing a woman screaming next to a body on the ground. Find out one teacher’s brilliant strategy for preventing future school shootings.

Forty-five years ago, President Richard Nixon gave a televised evening address during which he resigned from office. Following the Watergate scandal, Nixon likely faced impeachment and made the decision to step down himself before that occurred. The newspapers on August 8, 1974—including this one from the Washington Star-News—not only broke the news of the upcoming resignation, but it also alerted people to the time of the televised address. These are 22 presidential firsts you never learned in school.

When newspaper heiress Patty Hearst, granddaughter of American publishing magnate, William Randolph Hearst, was kidnapped in 1974 by the Symbionese Liberation Army, a left-wing terrorist group, it was major news. But things got even stranger when, after a few weeks with the revolutionary cell, Hearst started sympathizing with the group and joined forces with them, in perhaps the most well-known case of Stockholm Syndrome. In September 1975, Hearst was taken into custody by the FBI for crimes she committed as part of the group, including a bank robbery. What makes this front page announcing her capture particularly interesting is the fact that her father, Randolph Hearst, was president of the San Francisco Examiner at the time. Next, read on to find out why old newspapers turn yellow.