The Most Dangerous Roads in the World

Fancy signing up for the ultimate road trip? Tackle one of the following, although a word of warning: If you're the kind of driver who struggles to find reverse or doesn't know how to change a tire, you might want to allocate a designated driver to do the hard work instead. 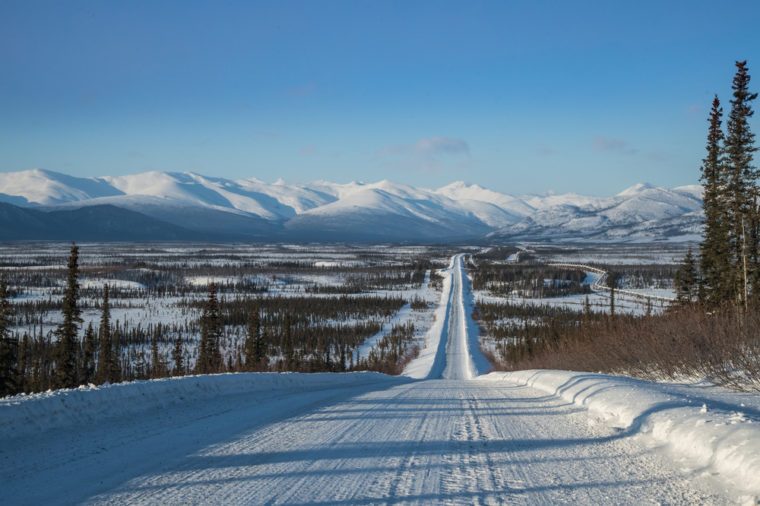 One of the world’s most isolated roads (and a regular fixture on all-American bucket lists), this icy finger of tarmac was built in 1974 as a supply route for the Trans-Alaska Pipeline System. Tackle this route and you’ll need to pack plenty of supplies; there are just three towns on the 413 miles (or eerily, 666 kilometers) route, one of which is named Deadhorse. To complicate matters, large sections have fallen into disrepair, and its most famous claim to fame is a reminder that this isn’t a highway you want to break down on: It’s the longest stretch of road in North America without roadside services of any kind. Alaska is not the U.S. state with the most dangerous commute, though. 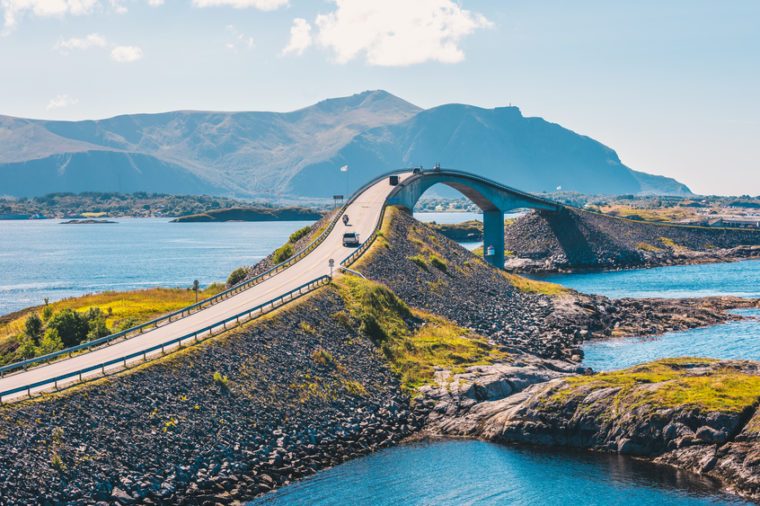 This twisting ribbon of coastal concrete might look beautiful, but don’t be fooled; it’s one of Norway’s most dangerous roads. Drive along it and you’ll feel as though you’re on a rollercoaster ride, thanks to the sharp turns, curves, and twists. When the weather’s bad—as it often is in this part of the world—visibility can disappear in a matter of seconds. And then you’ve got huge, thundering walls of water which regularly crash over the road’s barriers. Before you find yourself in this situation, read up on these tips for driving in dangerous situations, or choose a trip that will be more relaxing. 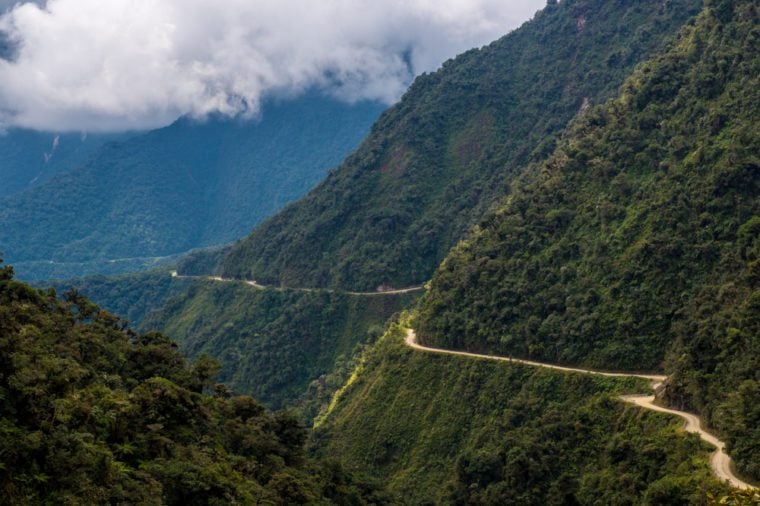 Scarily, this narrow road clinging to the side of a Bolivian mountain was once the main route into the country’s capital, La Paz, which holds the honor of the world’s highest capital city. Authorities eventually built a shiny new highway, but locals still speed down this road that also serves as a popular mountain biking spot. There are several reasons not to look down. One of the most unnerving sights is the dozens of makeshift memorials dedicated to those who’ve lost their lives here. The road has a total drop of 12,000 feet and even today, between 200 and 300 people die on the road every year. No matter what road you’re on, avoid these rude driving habits you should stop ASAP. 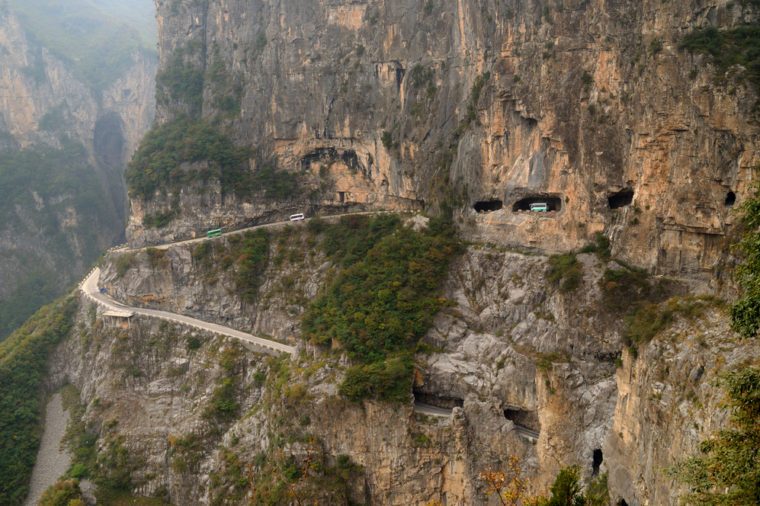 Leave the monster truck at home for this one. The inside of this 3/4-mile-long road tunnel is just 16 feet tall and 13 feet meters wide. You’ll find it in the Taihang Mountains of Henan Province, China. It was constructed in 1977 by 13 locals, although the reason that it took five years to build is that several villagers died on the job. There are 30 “windows” carved out of the rock, but we don’t recommend stopping for a selfie. And if the thought of driving through this particular tunnel gives you chills, consider this: Before it was built, locals from the village it connects to used a ladder to get back and forth. These are the top extreme travel adventures around the world. 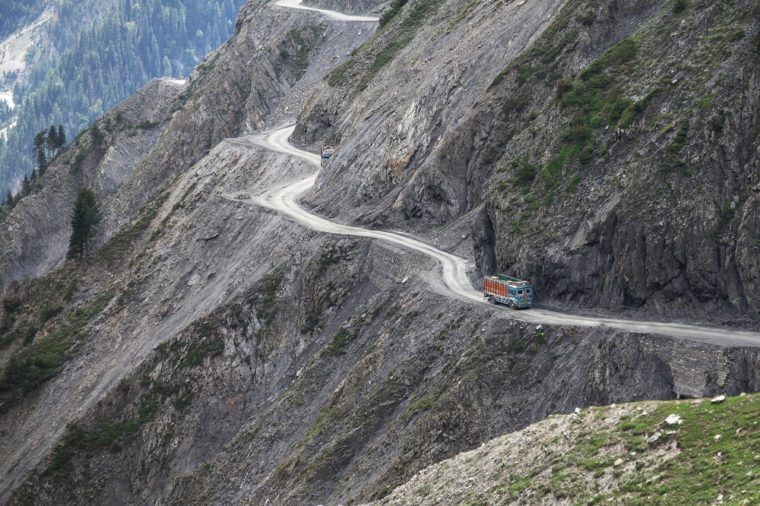 At 5.6-miles and 11,500 feet above sea level, this Himalayan highway connects Ladakh and Kashmir. The uneven road surface means it’s only really suitable for off-road vehicles, and during the colder months, wind, snow, and rain make this road more challenging. This is another place where it’s probably best not to look down; at some points, there’s only several thousand yards of nothingness between you and the valleys below. These eight people tell how they survived a fall from shocking heights. 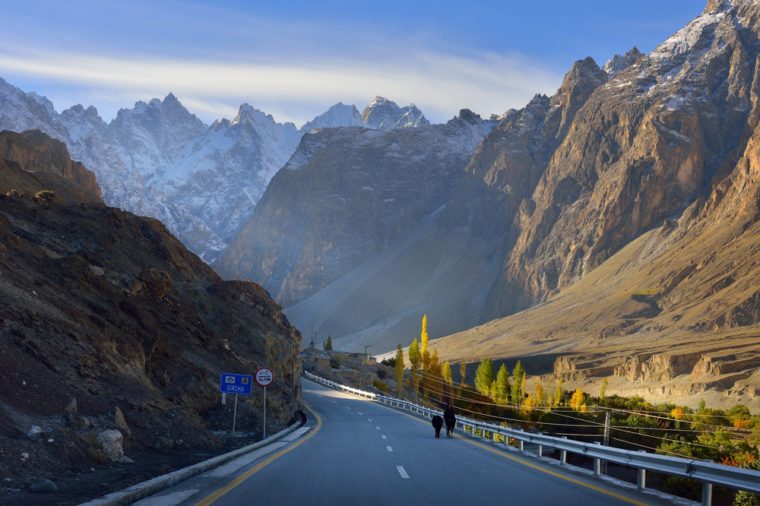 Karakoram Highway, between China and Pakistan

The Karakoram Highway connects China and Pakistan and at 15,400 feet above sea level, it’s the highest paved road in the world. A total of 82 workers died during construction, mostly due to rockslides, which remain an ever-present hazard to this day. There are no barriers, and many of the drivers who’ve had accidents on the road have been victims of altitude sickness or possibly distracted by the spectacular views of K2. The good news? There are plans to widen the road from 32 feet to nearly 100. The bad news? Authorities believe that this could see the number of vehicles triple. Check out these forbidden places no one is allowed to visit. 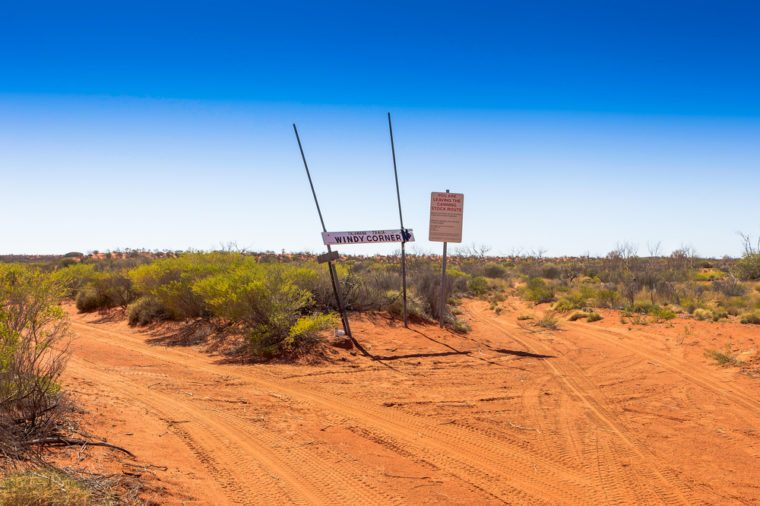 This road certainly doesn’t offer much in the way of views. There’s dust, dust, and more dust, and hardly any road signs to point you in the right direction. This 1,150-mile-long track in Western Australia is regarded as the world’s most remote road, and you’ll need three weeks to drive it from start to finish. Doing this road trip during the warmer months is almost impossible due to the searing heat, and drivers are advised to travel in multi-vehicle convoys. The road is in a bad state of repair, which is why drivers are urged to leave room not just food and drink but for spare parts, too. Don’t miss the world’s most dangerous tourist destinations. 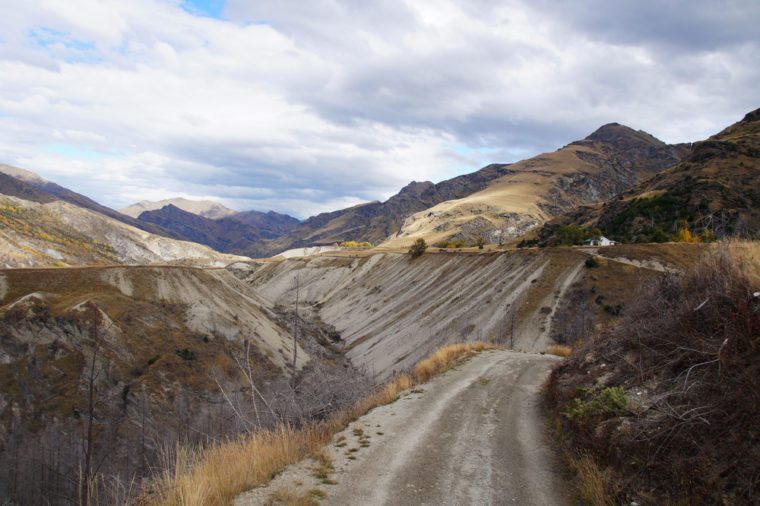 This unpaved road was carved out of the side of a New Zealand mountain 140 years ago, and today, it’s so dangerous that standard drivers’ insurance won’t cover you should you run into trouble. Encounter another vehicle and it’s highly likely you’ll have to reverse for up to 2 miles before you find a passing point. The miners who built it had only hand drills and gunpowder at their disposal, so it’s understandable that it took 20 years to complete. Don’t be surprised if it looks familiar; the road was a backdrop for Mission: Impossible Fallout and several Lord of the Rings movies. If you drive on any of these roads, you’ll want to remember these driving rules you’ve probably forgotten since driving school. 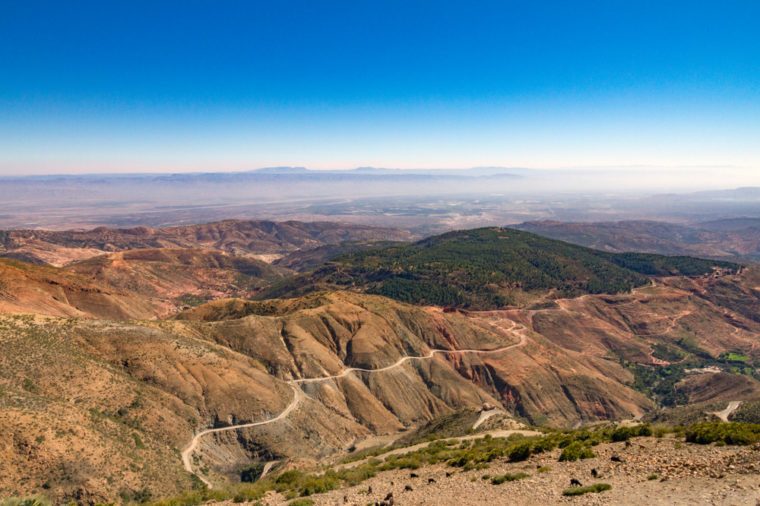 A narrow, winding road stuck to the side of Morocco’s Atlas Mountains, the Tizi-n-Test was blasted out of the rock in the 1920s and became the first modern road link between Marrakech and the Souss plains. The steep drops mean it’s best avoided if you suffer from vertigo, and local drivers are known to whiz along it at frightening speeds, ignoring rules of the road followed in other parts of the world. The lack of barriers means it should only be attempted in daylight, and during the winter landslides and avalanches occur on an almost daily basis. On the plus side, you’ll enjoy beautiful views of the Atlas mountains, the gorges of Moulay Brahim, and the Souss Valley. Next, check out the 12 most dangerous places in the world—if you dare.