Test your driving skills on this serpentine stretch of Southern highway that boasts a whopping 318 curves in just 11 miles.

Most road trips are about the scenery. Not Tail of the Dragon. While it’s certainly scenic, this trip is really all about the ride, and if you’re the one who’s driving, you’ll definitely want to keep your eyes fixed on the road. Twisting between the perimeters of Great Smoky Mountains National Park and Cherokee National Forest, this legendary section of U.S. Highway 129 is considered one of the most exciting—and dangerous—drives in the country.

It’s no wonder this exciting roadway attracts riders and drivers from all over the world: There are no intersections, traffic lights, or stop signs—just an asphalt ribbon that unfurls into 318 bends, curlicues, and hairpins for all of its 11 miles. Once you’ve tamed the Dragon, stick around to explore the region’s towering waterfalls, crystal-blue lakes, atmospheric mountain towns, and truly scenic highways. Before you hit the road, make sure you have these essential road planning tips and the following important information about the Dragon.

Tail of the Dragon map

Where is the Tail of the Dragon?

Near bustling Pigeon Forge, Tennessee, but a world away, Tail of the Dragon runs from Chilhowee Lake in Tennessee to the tiny settlement of Deals Gap, which is just over the North Carolina border. It’s about 90 miles west of Asheville, North Carolina, and 60 miles south of Knoxville, Tennessee. This stretch of U.S. 129 goes by the name Tapoco Road in North Carolina and Calderwood Highway in Tennessee, and it is surrounded by stunning roadways such as the Cherohala Skyway. Just a few hours away, on U.S. 441, you’ll find another one of the most scenic drives in America.

April through October is the peak time for Dragon slayers to hit the highway; winter weather in the area is unpredictable and can make the drive even more treacherous. Since the road gets more crowded as the day goes on (especially on weekends), plan to start early. And if you’re traveling by motorcycle, don’t forget your helmet—they’re required for both drivers and passengers in North Carolina and Tennessee. It will take about 30 minutes to drive the Dragon’s 11 exhilarating miles. 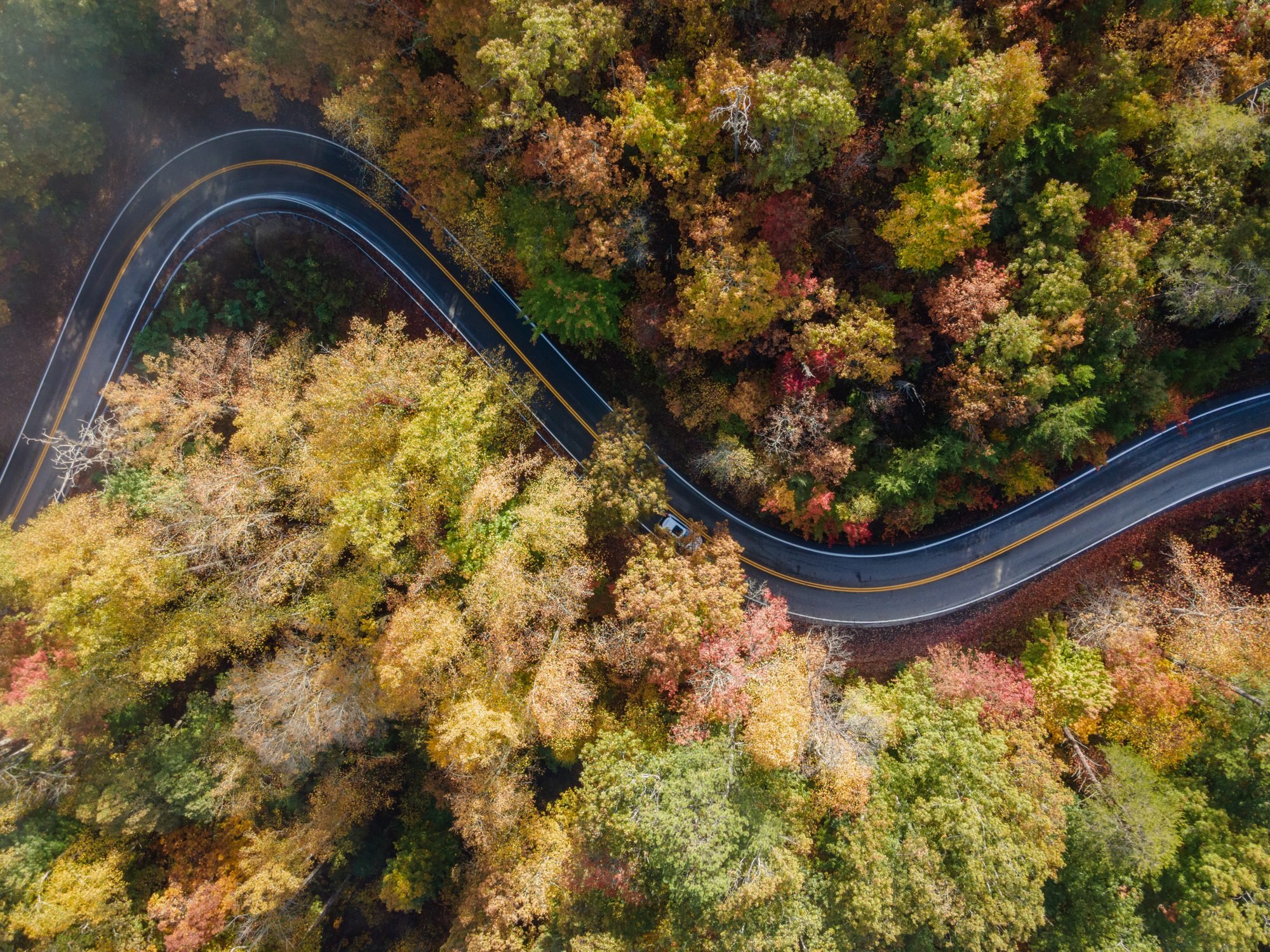 Safety tips for riding the Dragon

Yep, it’s a long list, but trust us—you need to take these precautions. While no one ever wants to get into an accident, you really don’t want to get into one here: It will take an ambulance about 45 minutes to reach your location from the closest hospital. With that said, here’s what you should keep in mind.

Think you’re invincible? Check out the Dragon Tree of Shame, which is covered with decades of detritus from motorcycle crashes on the road. It’s located at the Deals Gap Motorcycle Resort. Before you ride the Dragon, brush up on these additional driving tips for handling unexpected scenarios.

Tail of the Dragon history

U.S. 129 probably started life as a path used by wildlife and, later, hunters. Legend has it that in the 1830s, a group of Cherokee Indians used the trail to avoid forcible removal to land west of the Mississippi along what came to be known as the Trail of Tears. The road was paved around 1930, and before long, it became an under-the-radar destination for driving enthusiasts. That all changed in 1992 when an Atlanta motorcycle enthusiast formed the Deals Gap Riding Society and began to refer to the roadway as the Dragon. The name stuck, at least until around 2000, when the Tail of the Dragon website went live and that moniker became well known. Today, locals are enthusiastically divided about what the roadway should be called. If you’re in doubt, stick with the Dragon.

Sites around the Dragon have been featured in a number of movies spanning nearly 40 years, including 1958’s Thunder Road, 1971’s Two-Lane Blacktop, and 1993’s The Fugitive. Check out these other real-life movie locations you can actually visit.

Things to do near the Tail of the Dragon

There’s more to this road trip than just the drive. You’ll also want to check out the following nearby attractions, restaurants, and accommodations while you’re in the area. 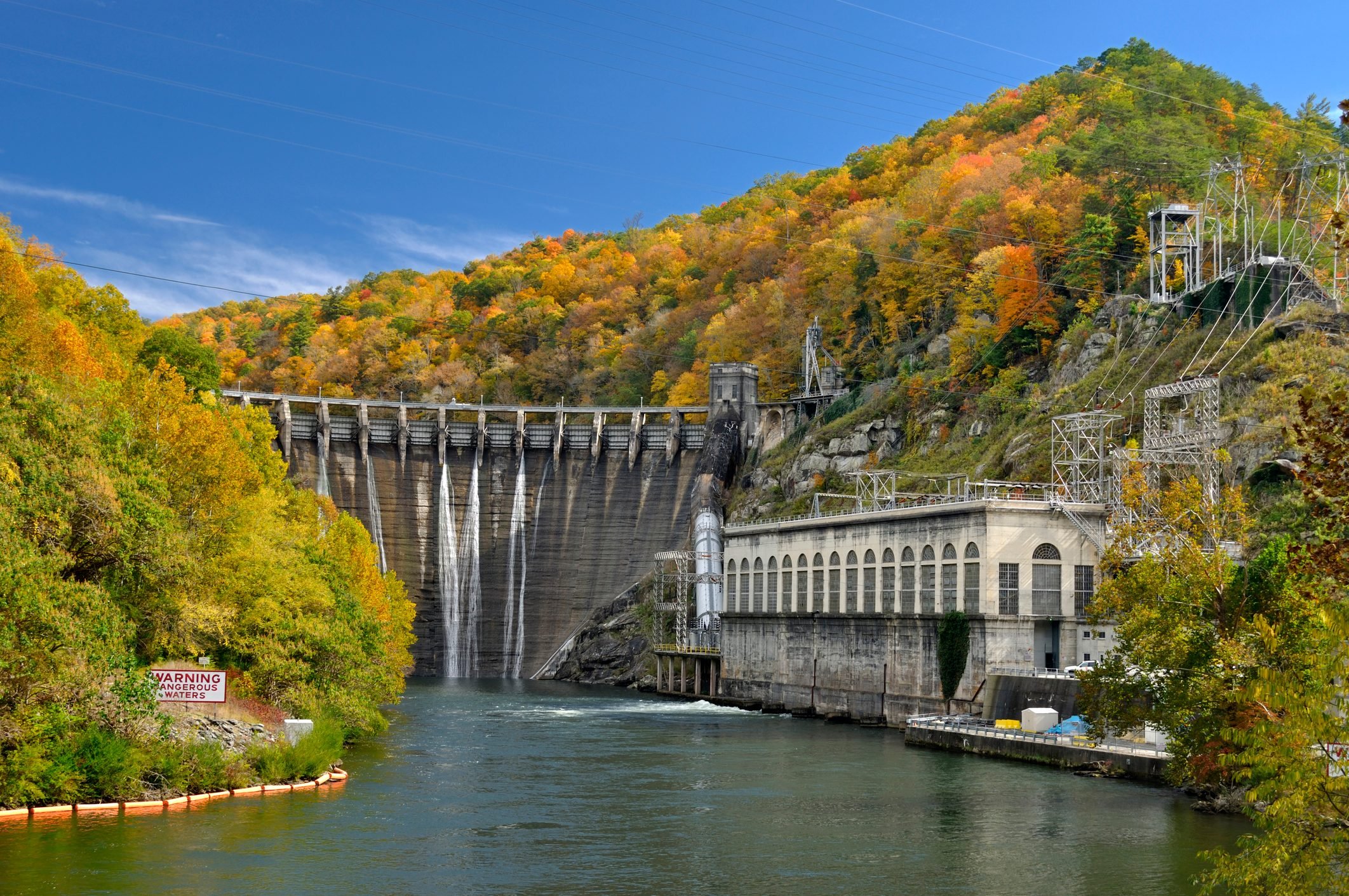 In an intense scene in The Fugitive, Harrison Ford, running for his life, leaps from a bridge into the roiling water below. That bridge is actually 225-foot-tall Cheoah Dam, which was constructed in 1919. While you shouldn’t really let your gaze drift to enjoy the view of this dam, you can pull over in one of the designated pullouts near the north side; just be aware that these spots aren’t that big and they fill up quickly.

Located at the North Carolina end of the Dragon, the Deals Gap Motorcycle Resort offers rooms, a campground, a restaurant, gas, and a shop where you can purchase drinks, supplies, and Dragon-themed paraphernalia. It’s a good place to rev up before your drive—or recover after it.

Tail of the Dragon Store

Directly across the street from the Deals Gap Motorcycle Resort, this store sells T-shirts, hats, patches, Tail of the Dragon maps, and other swag. The massive metal sculpture of a dragon with a motorcycle wrapped in its tail makes an irresistible location for a photo. 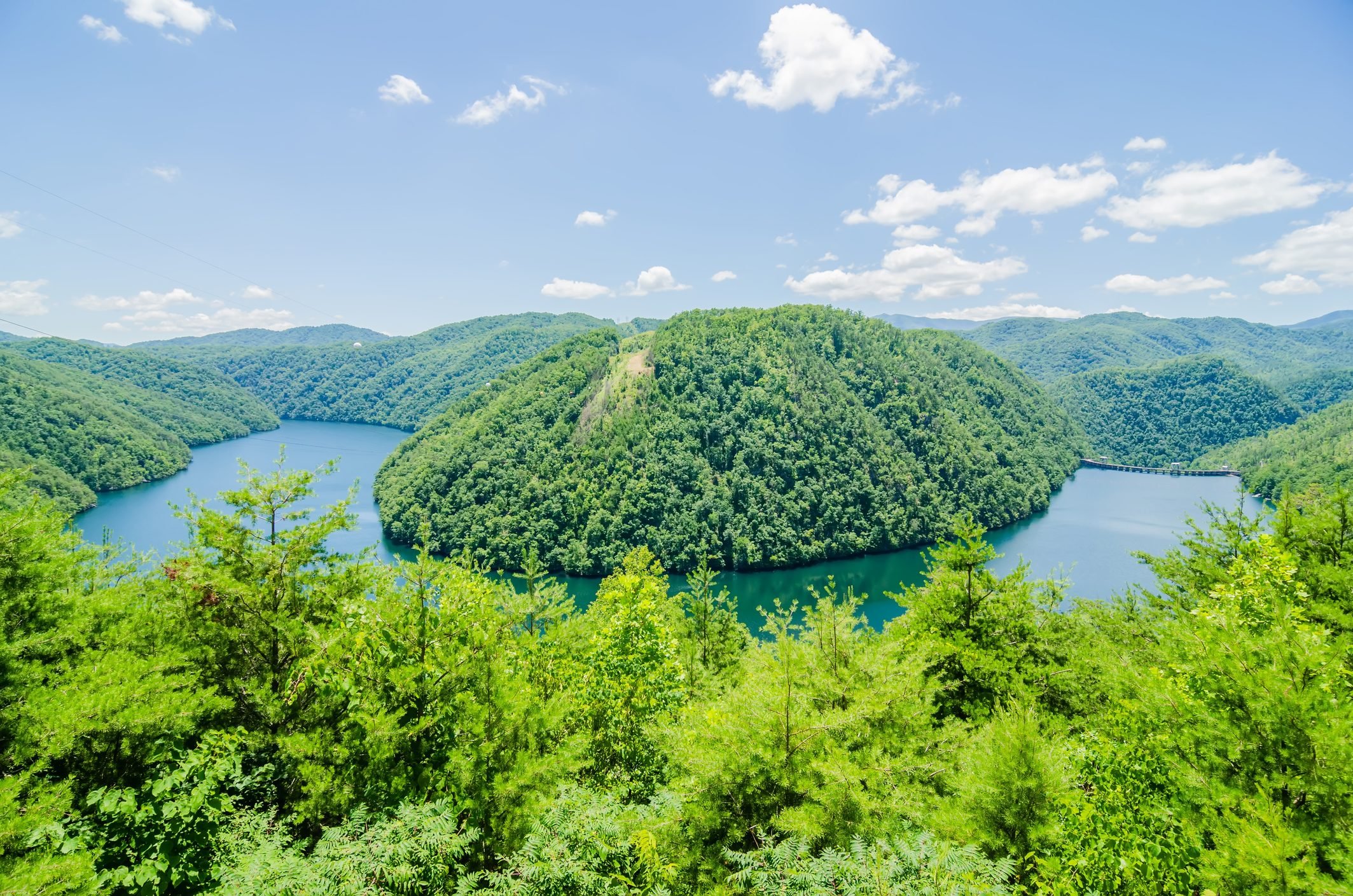 Around mile nine of the Dragon’s Tail in Tennessee, you’ll find the Calderwood Overlook, which offers spectacular views of the circa-1930 hydroelectric dam, the reservoir it created, and the surrounding mountains.

Fontana Dam is located just a little over nine miles from the North Carolina end of the Dragon. Reaching 480 feet into the sky, this massive concrete structure is the tallest dam east of the Rocky Mountains. There’s lots to do here, too. You can hike along the Appalachian Trail (a half-mile section of the trail actually crosses the dam), take in gorgeous views of forested hills that surround the dam’s pretty lake, and check out the exhibits and historical photographs within the visitor center. Fontana Lake, which was created when the dam opened in 1944, is open to the public for swimming, boating, fishing, and other activities.

Also in Robbinsville (about 16 miles from the Dragon), this forest boasts 3,800 acres filled with more than 100 varieties of trees, some of which are estimated to be than 400 years old. Hiking trails loop through the tract and include the two-mile-long, figure-eight-shaped Joyce Kilmer Memorial Trail and the Naked Ground Trail, a 4.5-mile in-and-out that crosses streams as it climbs into the woods. If hiking’s your thing, here are more of the best hiking trails in the country. 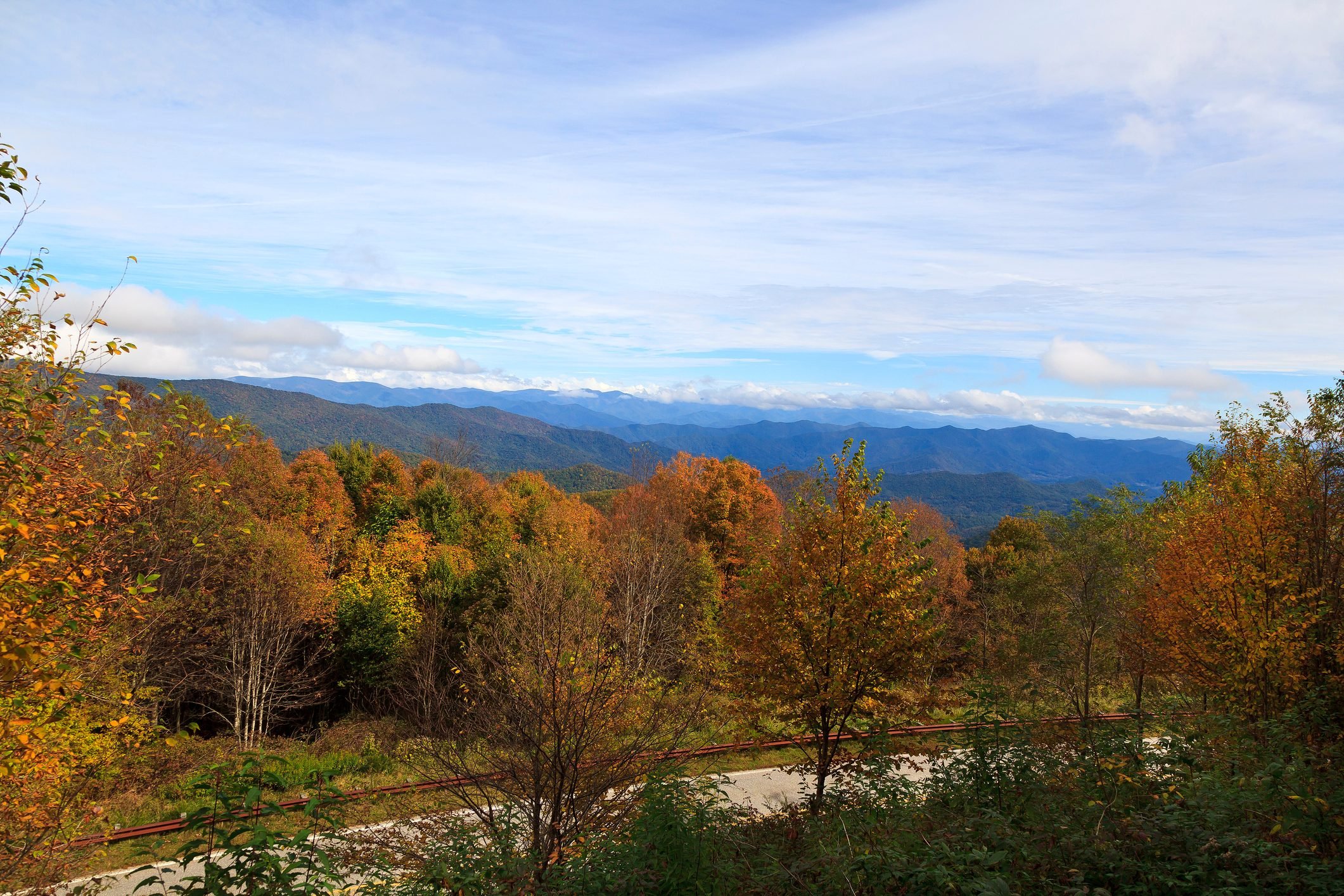 For the ultimate driving experience, pair the Dragon with a ride on this road, located about 36 miles away. It took 34 years and more than $100 million to construct the Cherohala Skyway, but when it finally opened in 1996, the 43-mile National Scenic Byway and National Forest Scenic Byway was a winner, offering some of the most glorious views in the region. As it twists and turns across the rugged mountain ridges, the Skyway gains more than 2,700 feet in elevation. Along the way, you’ll find picnic areas, trailheads, and safe places to pull over and admire the landscape.

Aside from the Deals Gap Motorcycle Resort, you should check out the Two Wheel Inn. Each of its 19 rooms comes with a garage for your motorcycle. There are also two apartments, a pair of firepits, and tennis courts. The inn is located about 20 miles farther down U.S. 129, just south of Robbinsville, North Carolina.

In Robbinsville, which was developed around 1930 as a village for dam workers, you’ll also find the Historic Tapoco Lodge Resort. It offers 28 rooms, a gorgeous riverfront location, two restaurants, and a 125-acre site filled with walking paths and hammocks.

For a truly unique experience, book a stay at the Rivers Edge Treehouse Resort. The name really says it all: This collection of six freestanding cabins on stilts lies just steps from the Cheoah River. Each treehouse has an oversized deck, a king-size bed, and lots of privacy. If you love this idea, take a look at these other magical treehouse hotels around the world.

Low-key and friendly, Lynn’s Place serves Southern favorites like fried okra, sautéed local trout, and the Dragon Slayer, a chicken breast covered in barbecue sauce and topped with bacon and mozzarella cheese. Don’t forget to save room for the fried cheesecake! Walk it off with a stroll around downtown Robbinsville.

At Moonshiner Steakhouse, you’ll find more than big steaks, Caesar salads, and burgers—though they are all delicious. The menu also offers grilled salmon, shrimp tacos, and a killer artichoke dip. The restaurant is adjacent to the Two Wheel Inn.

Finally, put Willow Tree Catering, Bakery, and Restaurant on your list. Chef Shea Blalock Anderson, a graduate of Johnson & Wales University in Charleston, opened this restaurant as a way to elevate the mountain cuisine of her native North Carolina. For diners, that means delicious bites like hush puppies made with aged cheddar and served with Sriracha aioli, and green tomato salad with spicy pecans and a grilled pork chop brined in sweet tea and served with molasses barbecue sauce. Yum! Remember: Food is just one of the things you’ll want to factor into your road trip budget, so make sure to plan ahead.

Your Guide to an Atlantic Coast Road Trip

Your Guide to an Outer Banks Road Trip 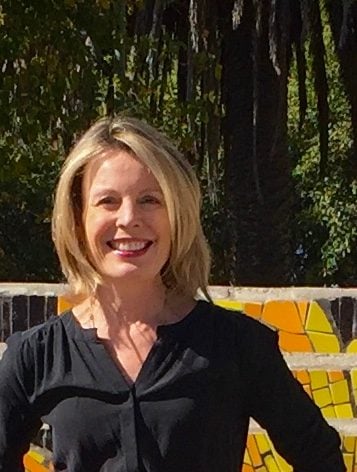 Katie McElveen
Katie McElveen is a contributor to Reader’s Digest, where she covers travel, pets and lifestyle. Her work has also appeared on Sherman’s Travel, Travelocity, Islands, Destination Weddings & Honeymoons, Virtuoso and other sites and in publications including Global Traveler, AAA GO and Montage Magazine. A graduate of the University of Maryland at College Park, Katie lives in Columbia, South Carolina.

The 40 Most Scenic Drives in America