The 12 Most Famous Cats in Pop Culture History

From Garfield to Grumpy Cat to Choupette...cats have long starred in pages of our favorite books, movies, and more. 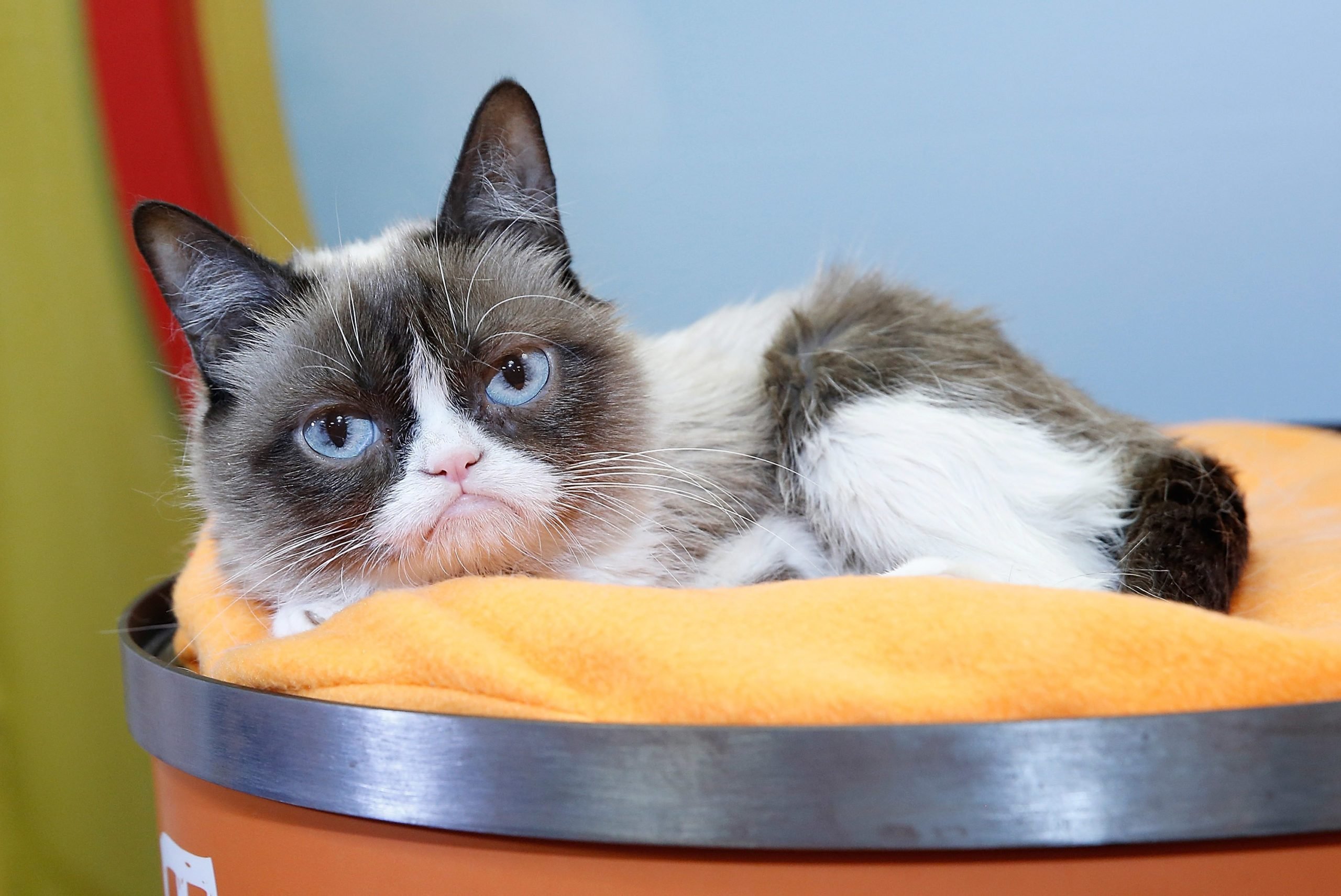 It doesn’t matter whether you identify as a “cat person” or not, there are some famous felines who pawed their way into the hearts of pop culture aficionados regardless. From the persnickety looks of social media phenom Grumpy Cat to lasagna-loving Garfield, cats have garnered a lot of attention throughout the years. That leaves a lot of precious animals in need of homes. Before you decide to adopt, prrrr-use (see what we did there?) these famous cats from pop culture history. Cat lovers will want to make time to check out these 40 cute photos of kittens sleeping. 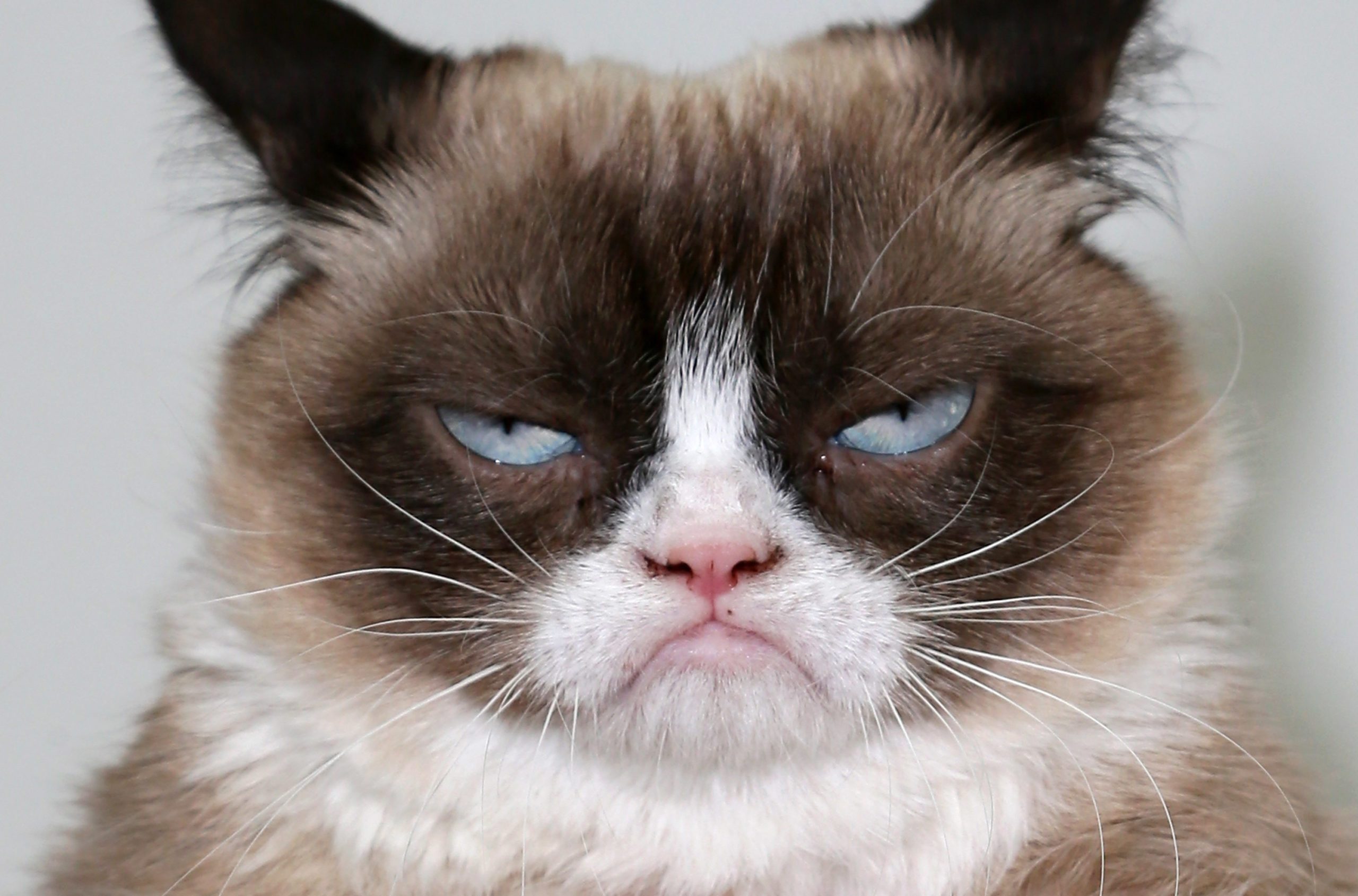 The viral sensation known as Grumpy Cat (real name: Tardar Sauce) captured the attention of millions because of her perpetual frown. In 2012 her photos hit Reddit when Tardar Sauce was just a kitten, with people identifying with her less-than-impressed look, making her the star of many an internet meme. According to her human, Tabatha Bundesen, Tardar Sauce isn’t actually unhappy at all. “She really isn’t grumpy,” she posted on Grumpy Cat’s official website. “She is a super cute and cuddly kitty and loves to be held and rubbed!” Sadly, Tardar Sauce passed away in May 2019. First-time cat parent? These are the mistakes cat owners should never make. 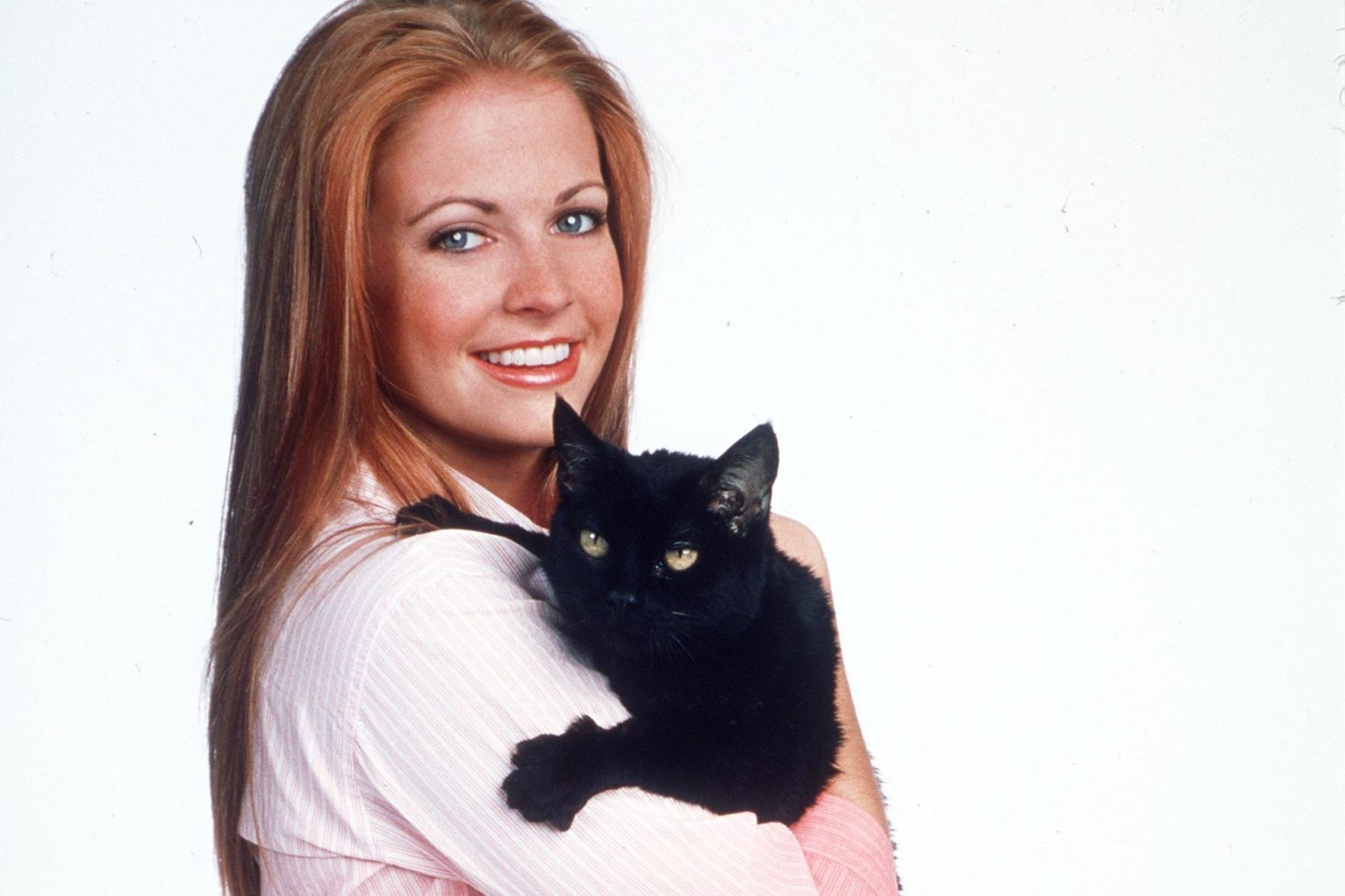 Salem from Sabrina the Teenage Witch

Salem Saberhagen, a most opinionated fictional black cat, may have gained prominence when he appeared weekly on ABC’s Sabrina the Teenage Witch, airing from 1996 to 2003, but the character was around long before that. In fact, Salem first appeared in the Archie Comics Sabrina series upon which the show was based way back in 1962. While he was often portrayed by a puppeteer on the TV program, occasionally an actual cat would be brought in to bring Salem to life, much to actress Melissa Joan Hart’s chagrin. “Being around that Salem cat too much…the set was covered in cat food,” she told Vulture. “So yeah, I can’t do cats anymore.” 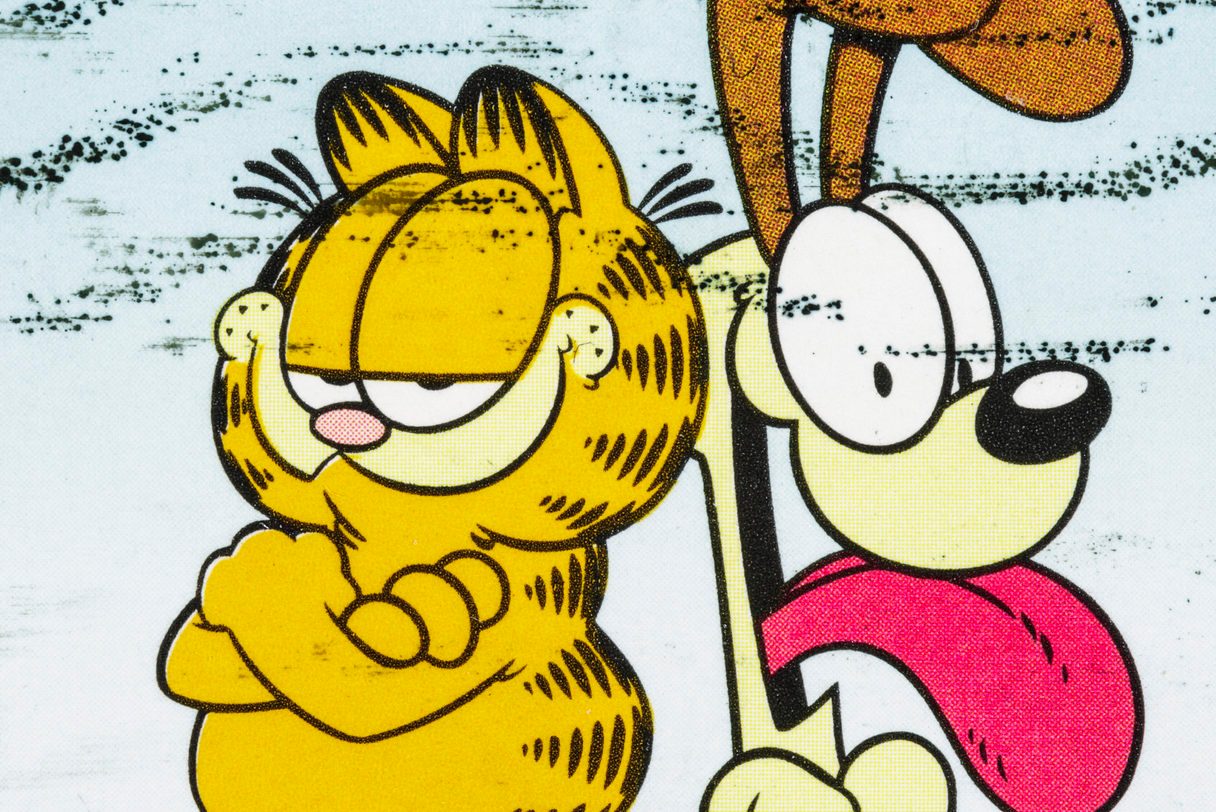 Hide your lasagna, people, because Garfield, the comic strip cat with a big appetite, isn’t afraid to attack a pan of the rich, cheesy dish. The first comic starring the portly feline debuted in U.S. newspapers in June 1978, per Garfield’s official website. Two years later his first book landed at #1 on the New York Times bestsellers list. From there, more books were published, a TV special hit the air, and then, ultimately, a weekly Saturday morning cartoon in 1988—an entire decade after he made his debut. In 2002 he even set a Guinness World Record for being the most widely syndicated comic strip in the world. Now that deserves some lasagna. Find out how this shelter cat became a world record holder. 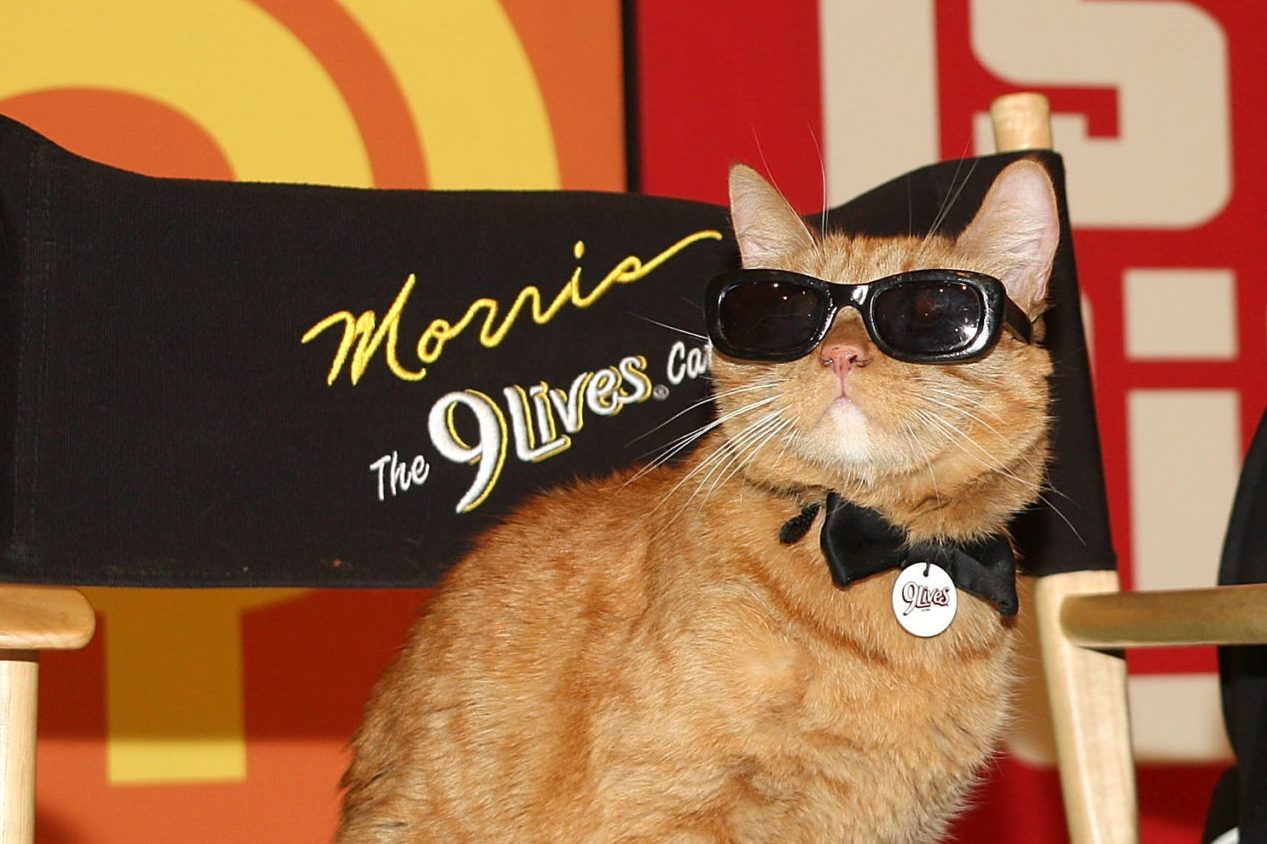 In the world of cat food, there was none more finicky than commercial star Morris the Cat, or at least that’s what each 9Lives ad told us. Morris made his debut in 1968 for the cat food brand, even gracing some of its packaging, not to mention loads of television ads. An orange tabby cat, he was “discovered” at the Humane Society in Hinsdale, Illinois, and remained the company’s “spokescat” for years, appearing in 58 commercials. He even appeared in the movie Shamus with Burt Reynolds in 1973. While the original Morris is no longer with us, his spirit continues on with modern versions of the picky eater still representing 9Lives. Find out the best dry cat foods, according to vets. 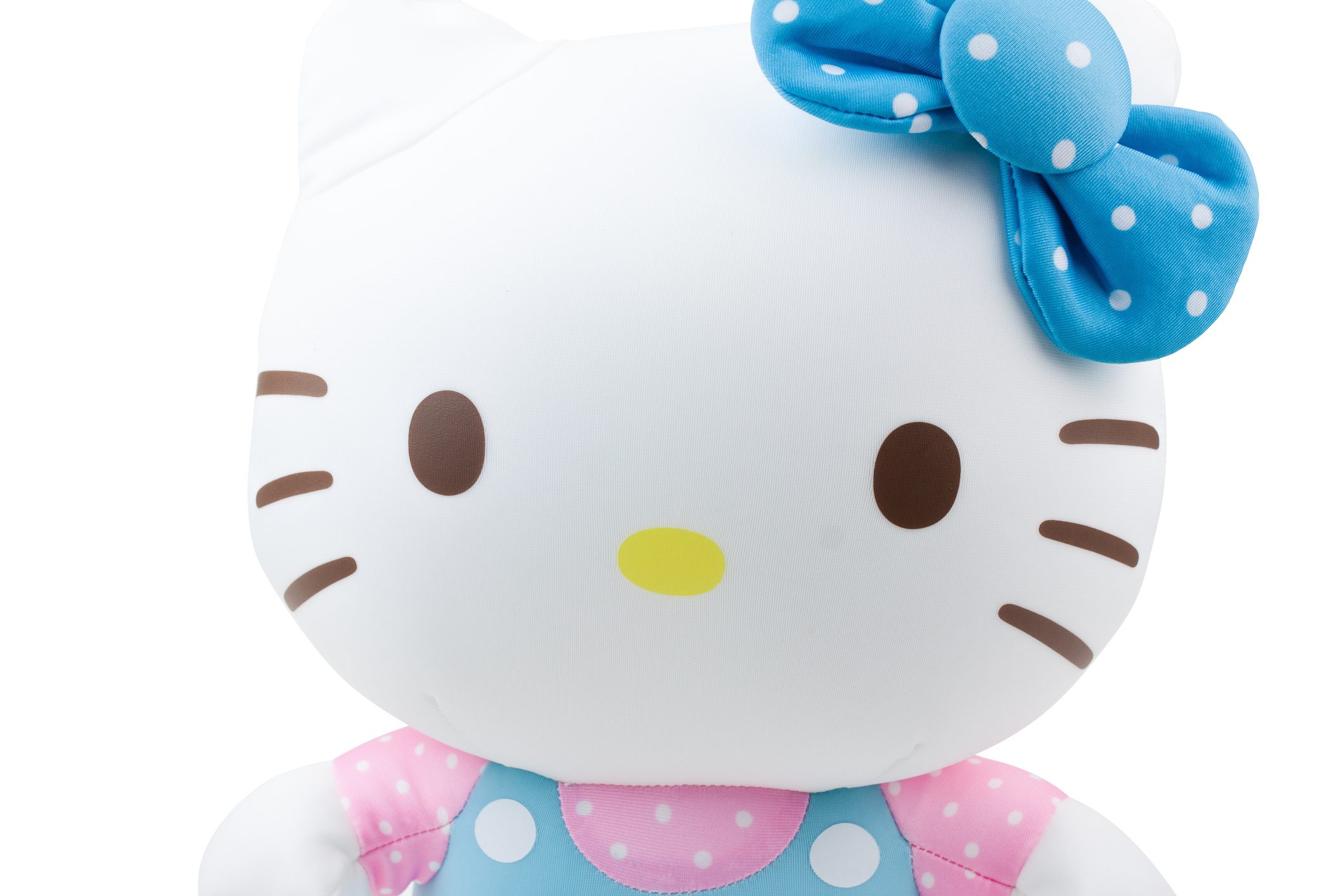 Listen, there’s a lot of debate about whether or not Hello Kitty is a cat or, in fact, a little girl. In 2014 Sanrio, the company behind the cutesy character, made this bold statement that she is in fact a human and it shook HK fans to the core. But considering the general public had largely always considered her a feline, we’re filing her under one of the most famous cats in history. With that adorable little nose, whiskers, and cat ears, that’s our story and we’re sticking to it. Her real name, in case you didn’t know, is actually Kitty White, and, according to a Los Angeles Times article, she is a perma-third grader. Kitty was first introduced in 1974 when her image decorated a small coin purse. The rest, as they say, is history. Ever wonder what your cat is trying to tell you? Read these decoder secrets. 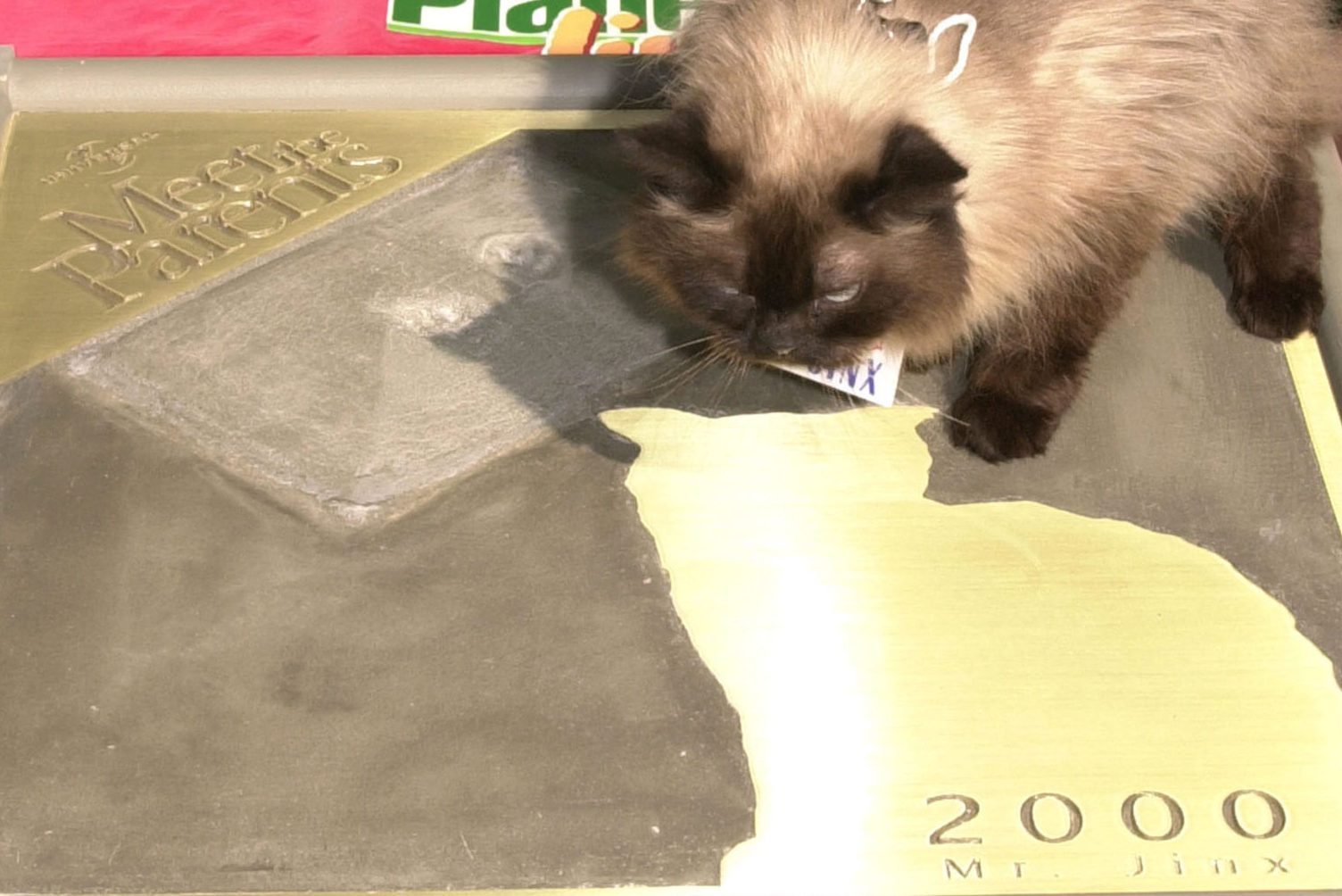 They say dog is a man’s best friend, but in the case of Meet the Parents character Jack Byrnes (played by Robert DeNiro), his beloved pet was a cat named Mr. Jinx. Their bond was so special, Jack taught Mr. Jinx a great number of talents, most notably how to use a toilet instead of a litterbox. According to Humane Hollywood, two separate Himalayan cats (named Bailey and Misha) portrayed the character, who went on to appear in the film’s sequels, Meet the Fockers and Little Fockers. Here’s how you can train your cat to use the toilet and other life-changing things. 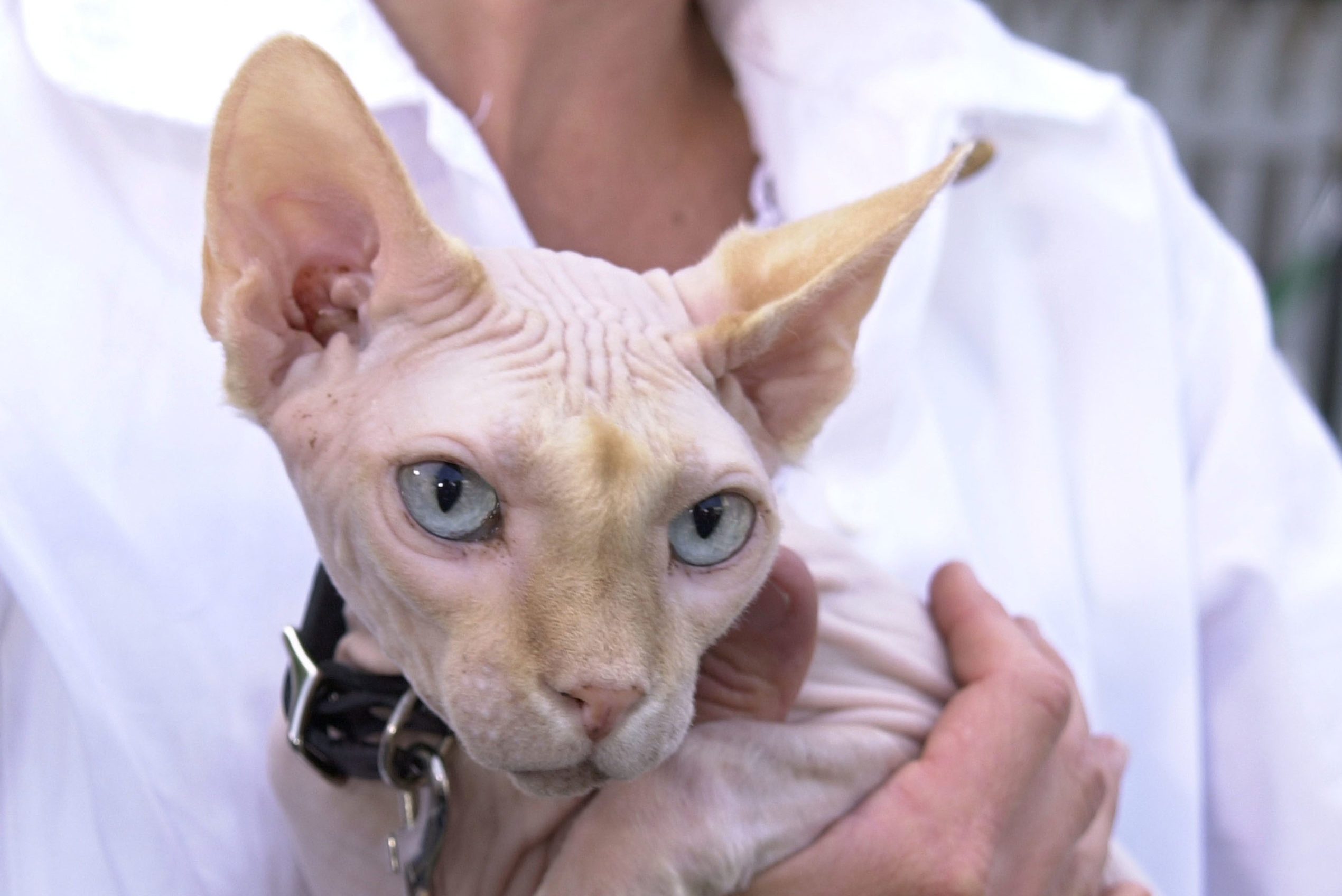 You’d think it would be hard to top the colorful antics of Austin Powers and his nemesis Dr. Evil, but the film franchise did manage to produce a scene-stealer in Mr. Bigglesworth. The hairless cat was a precious companion to the antagonist who made it his mission to not only bring down the “international man of mystery” but also take over the world. According to the Chicago Tribune, the feline actor is a sphynx cat whose real name is Ted Nudegent. “When Ted appeared on the set for the sequel, he hadn’t seen Mike in months,” animal trainer Tammy Maples told the newspaper. “Ted immediately ran to Mike’s lap, jumped in it and began to purr. I believe Mike really loves Ted. On more than one occasion, Ted wound up staying in a scene longer than planned because he dozed off in Mike’s lap.” Take a look at what the cutest cat breeds look like as kittens. 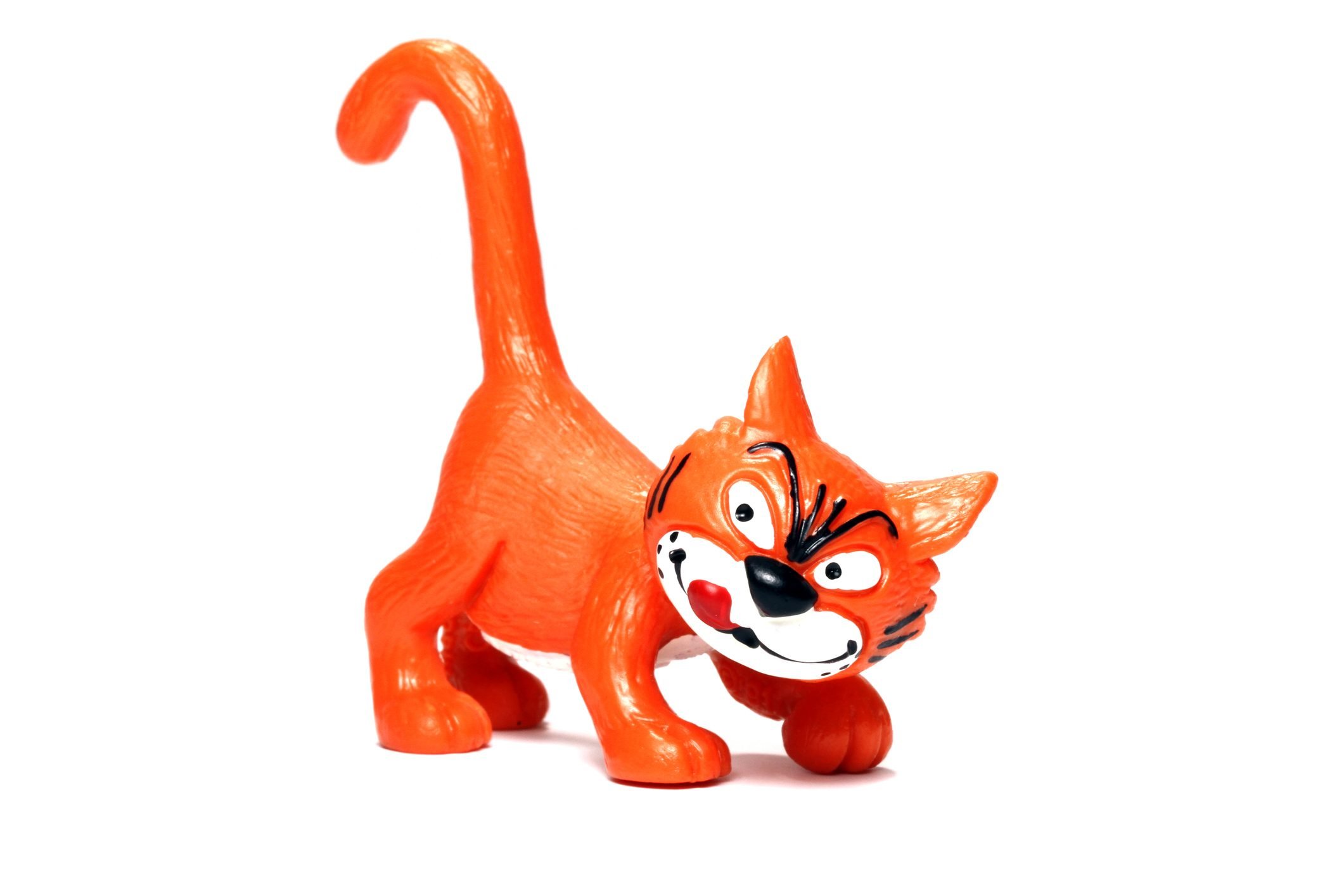 Eighties kids who grew up on Saturday morning cartoons will surely remember Azrael, the astute pet cat of Smurf nemesis Gargamel. The feisty feline was at the ready to assist Gargamel in his dastardly plans to wreak havoc on Smurf Village, despite the fact that those little blue whippersnappers never did a thing to deserve his wrath. Azrael made her debut in the Smurfs comic books and has remained with the franchise through the feature films, in which she is animated through the magic of CGI. The cat’s look has changed throughout the years but in the movies most closely resembles an orange tabby cat. 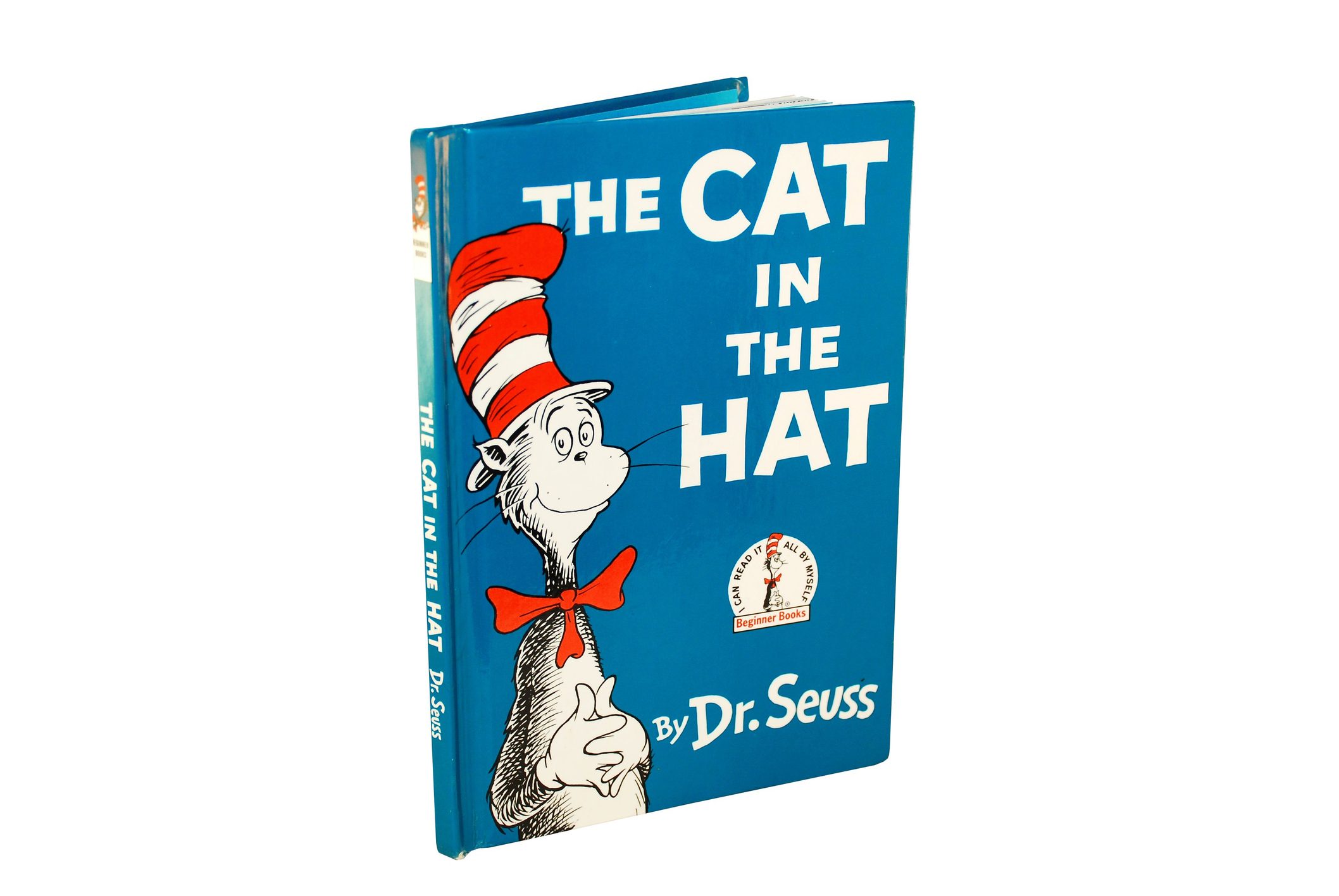 The Cat in the Hat

Is there a more important cat in children’s literature than The Cat in the Hat? We think not. Originally published in 1957, Dr. Seuss’s tale of an opinionated cat with a penchant for fun has stood the test of time. Today PBS still airs the animated series The Cat in the Hat Knows A Lot About That! and the character continues to delight little ones who are just developing a love of words and books. Did you know that author Theodor Seuss Geisel (his real name) used precisely 236 different words that kids can understand to write the story? Clearly he was on to something. These unusual facts about Dr. Seuss are interesting for the biggest and littlest of fans. 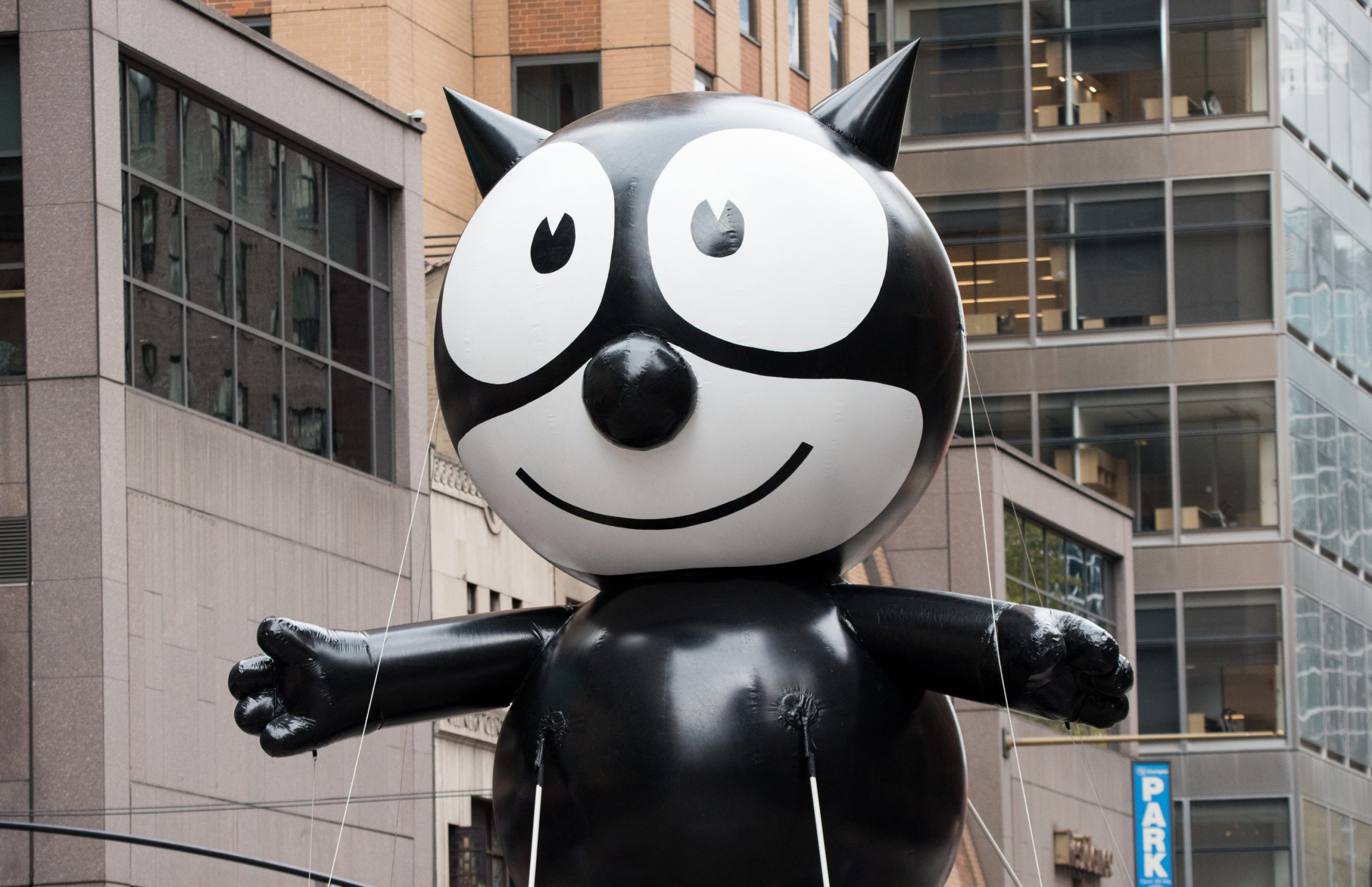 If you want to get really nostalgic, cartoon Felix the Cat was created way back in 1919 during the silent film era. First introduced in Feline Follies, a short film, Felix then became a star of the comics section in newspapers. Created by Otto Mesmer, a New Jersey-based cartoonist, the black and white kitty has a lot of credits to his name—like being honored as the mascot of Fighter Squadron 2-B with his image gracing their F-3 biplanes, according to his official website. On top of that, Felix the Cat was the first image ever to appear on American television. 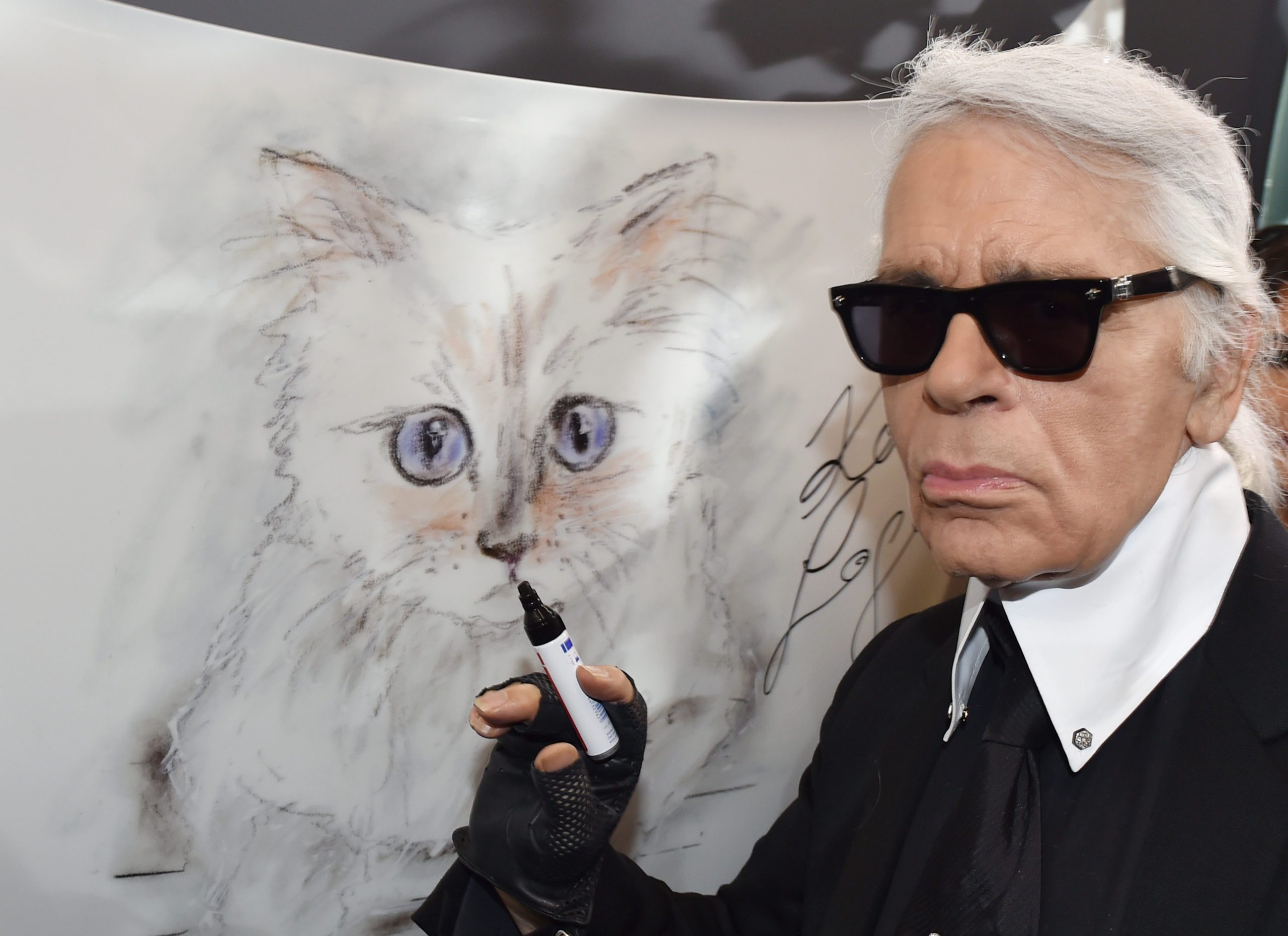 Perhaps history’s most fashionable cat is Choupette Lagerfeld, pet of the late German designer Karl Lagerfeld. The fashion icon was frequently photographed with his beloved white Siamese cat and told WWD that Choupette was given to him by a model named Baptiste Giaconi in 2011. “She has a strong personality,” Lagerfeld said. “She has lunch and dinner with me on the table, with her own food. She doesn’t touch my food. She doesn’t want to eat on the floor. She sleeps under a pillow and she even knows how to use an iPad. She has two personal maids, for both night and day. She is beyond spoiled.” 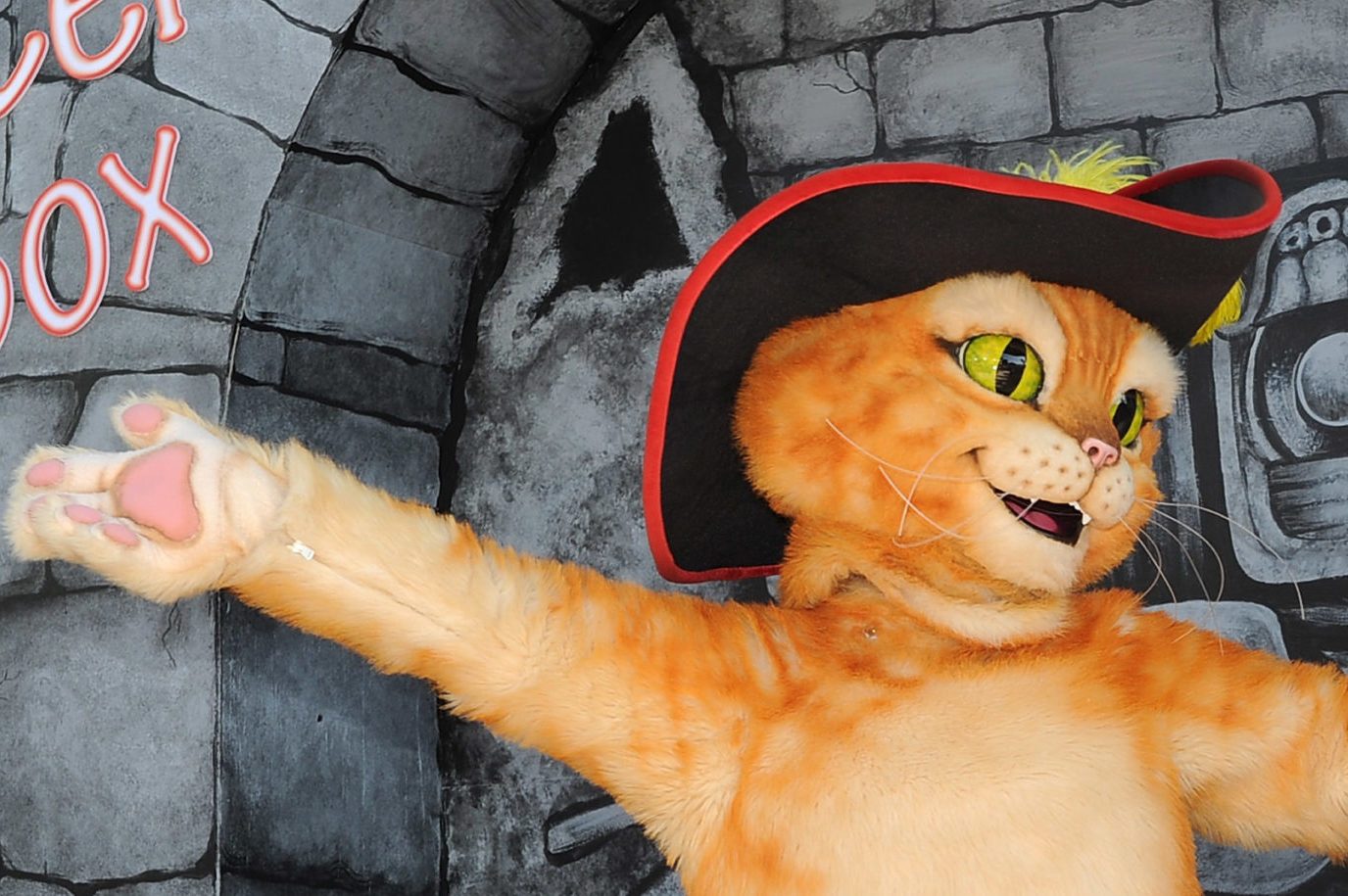 The Shrek film franchise really shined a spotlight on the fairytale character of Puss in Boots, but the fictitious cat has been around much longer than that big green guy. He originally started out as a literary figure dating back to the early 1550s in The Facetious Nights of Straparola by Giovanni Francesco Straparola. Puss in Boots was resurrected in fairytales later in the 1600s and in modern-day, of course, received his own self-titled full-length feature film with Antonio Banderas voicing the loveable outlaw. Netflix even developed an animated series around the character titled The Adventures of Puss in Boots. Next, read on to find out the most famous movie dog the decade you were born.