The Most Shark-Infested Waters in the World

Love them or hate them, sharks are a vital part of the Earth's ecosystem. Here are some of the places where you may be most likely to encounter one yourself. 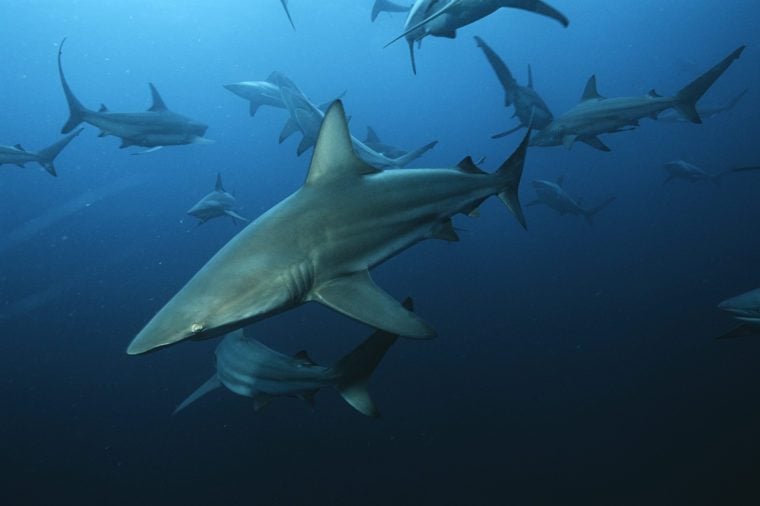 There are about 500 different species of sharks in the world, and they live in all of the Earth’s oceans. The first sharks evolved more than 400 million years ago, but they’re currently in a bit of trouble. Numbers of many species are down, and an estimated 100 million sharks are caught and killed by fisheries annually. Check out these shark myths you shouldn’t believe. 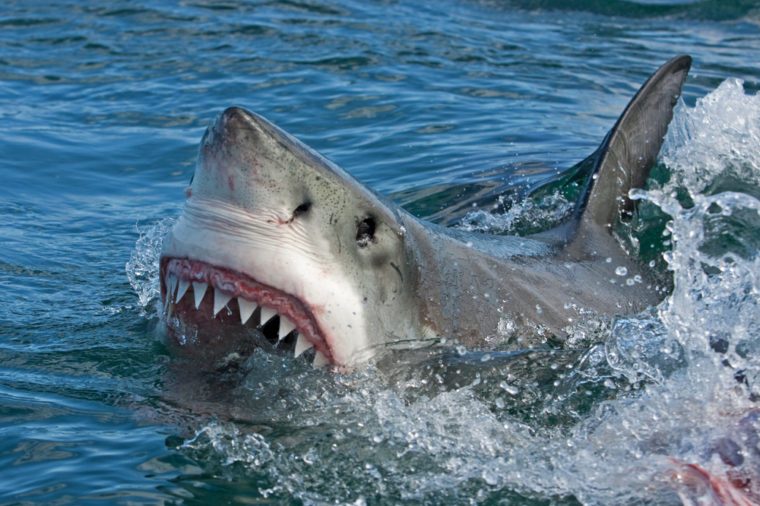 …But attacks are on the rise

Although unprovoked shark bites are on the rise around the globe, only a few types of sharks are actually dangerous to humans—bull sharks, great whites, and tiger sharks are the ones most likely to attack people, although blacktips, spinner sharks, and hammerheads are known to bite, too. That said, the average person is more likely to die from a lightning strike than be bitten by a shark, according to the Florida Museum’s International Shark Attack File (the world’s only scientifically collected, comprehensive database of human-shark interactions). In fact, these 22 animals are all far deadlier than sharks. If you’re fascinated by these apex predators of the sea you may want to plan a trip to the below beaches, all of which are known shark hotspots. (On the other hand, if you’re terrified of sharks, you may want to stay as far away as you can.) 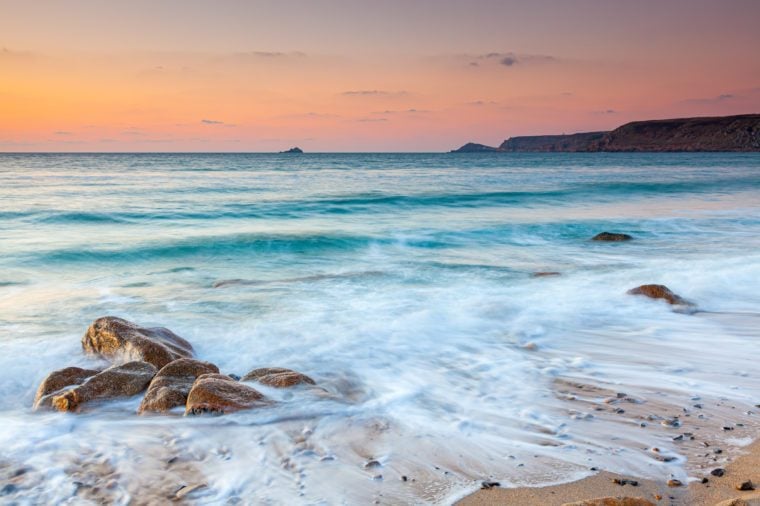 This 1-mile stretch of beach is famous for sightings of basking sharks, which can be as big as 40 feet long and weigh as much as 10,000 pounds. Thankfully, they’re gentle and not interested in eating mammals. They have only small, hooked teeth and, like whales, they filter plankton and other tiny sea creatures through large gills. They’re generally not considered dangerous to humans, although their sharp skin scales have injured divers. 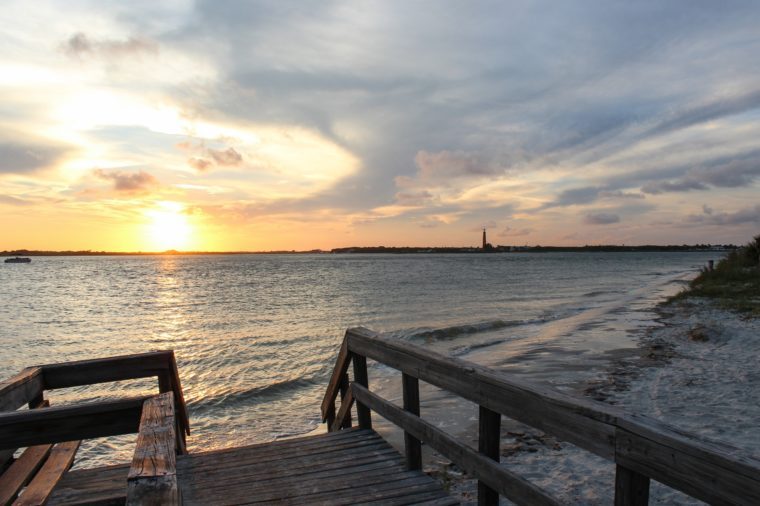 Florida has more shark attacks each year than any other area in the world, according to the International Shark Attack File (ISAF). A disproportionate number them happen in Volusia County, where New Smyrna Beach is located, according to shark researcher Blake Chapman, PhD, author of Shark Attacks: Myths, Misunderstandings, and Human Fear. The ISAF shows that there have been 303 unprovoked shark attacks (meaning the swimmer or surfer wasn’t actively trying to feed or interact with the animal) since records started being kept in 1882—that’s nearly double the amount of the next-highest area of Florida, Brevard County.
One reason shark bites happen more often in Volusia could be the murkiness of the water thanks to heavy rain runoff, according to a 2016 study published in the journal Ocean & Coastal Management by Chapman and her co-author Daryl McPhee, PhD, an associate professor of Environmental Science at Bond University. 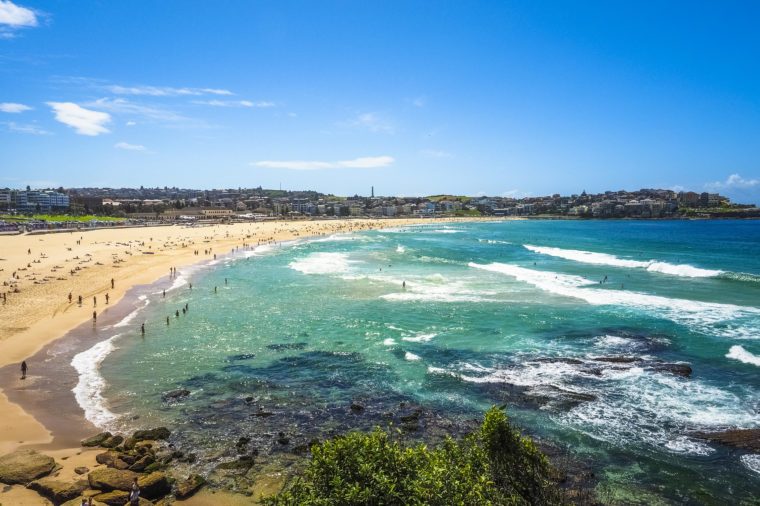 Australia has the second-highest number of unprovoked shark bites in the world, and long-term data show attacks are on the rise, according to Chapman’s study. There have been 139 shark bites since 2007, 15 of them fatal, according to the ISAF. Most of the attacks have taken place off the coast of New South Wales, the state where Bondi Beach is located. One group of swimmers in Bondi were photobombed by a large shark in 2015 while taking underwater pictures, and a 7-foot mako washed up dead on the same stretch of beach in 2018. And if you’ve been wondering, here’s whether or not sharks can actually smell blood. 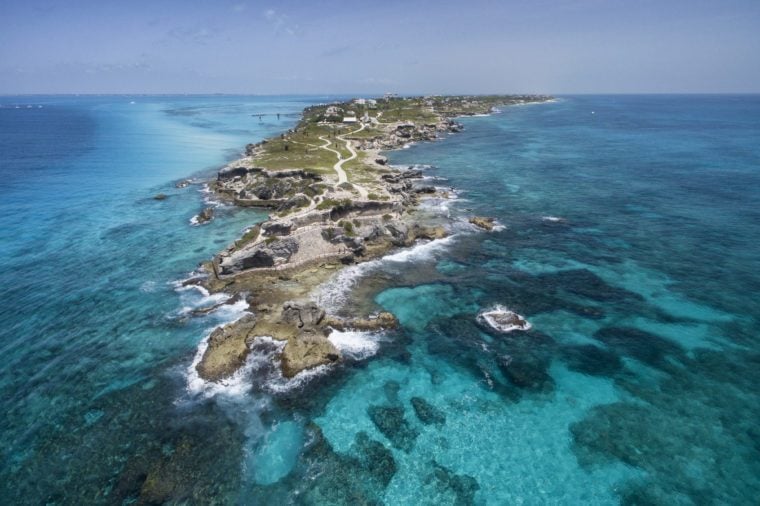 Large groups of giant, but gentle, whale sharks migrate through the waters off of Isla Mujeres May through September. They bring tourists and divers from all around the world—in fact, there’s even an annual Whale Shark Festival in mid-July. Like whales, these sharks are filter-eaters, straining plankton from huge gulps of water. Sharks’ voracious appetite is one of the reasons they are so vital to our oceans. 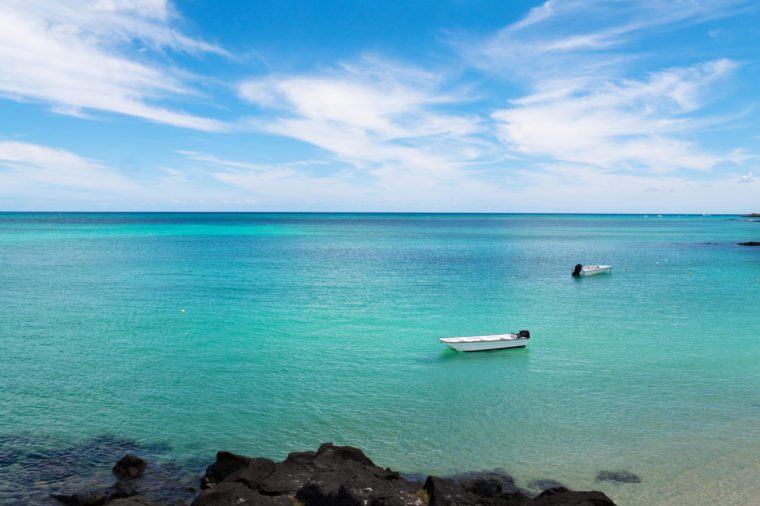 Unprovoked shark bites are infrequent in the waters of Réunion Island, a French island off the coast of Madagascar, but there’s been a noticeable increase in the past decade. That said, one surfer was killed in an attack in May 2019, according to news reports. Larger species such as bull and tiger sharks are known to frequent the area. And the area is of particular interest to researchers because of its small population compared to other bite hotspots and the relatively high proportion of fatalities, says Chapman. 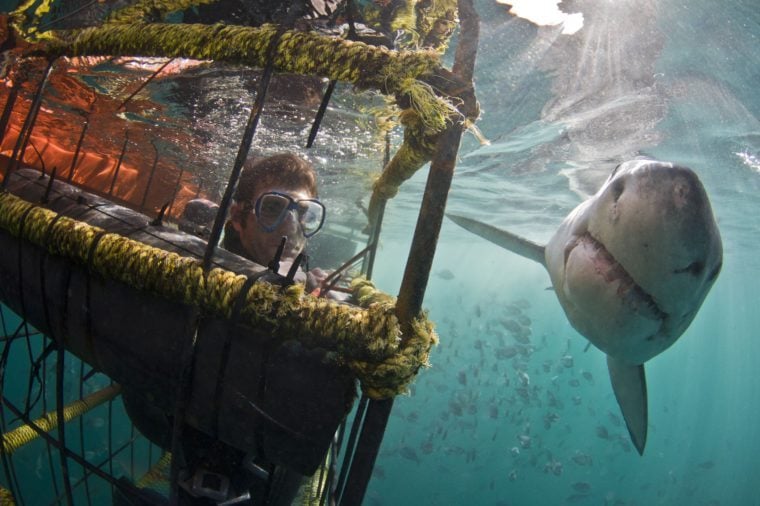 The Western Cape of South Africa, where the fishing town of Gansbaai is located, has become a popular tourist spot for people hoping to cage-dive with the plentiful Great White sharks. Perhaps unsurprisingly, Chapman and McPhee also identified South Africa as a hotspot for unprovoked bites. Also unsurprisingly, you won’t often find great whites in aquariums, but it’s not for the reason you think. 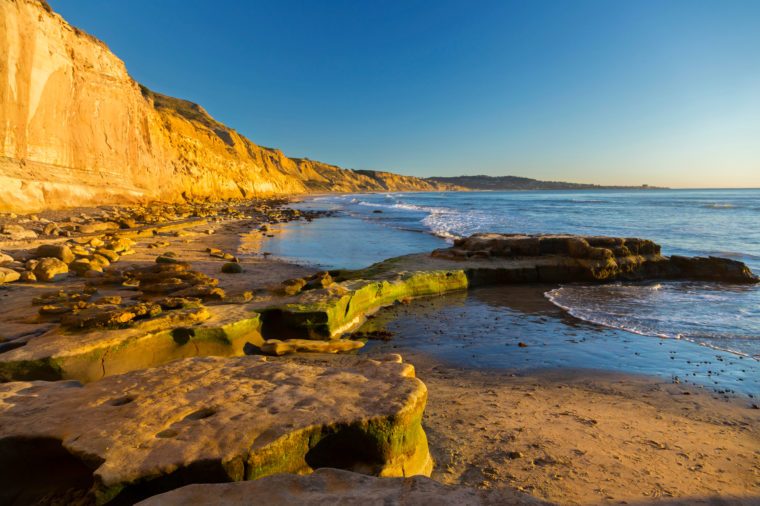 The shallow waters just off of La Jolla Shores in San Diego County, California is a perfect spot to swim with docile leopard sharks who swarm the area thanks to warmer-than-usual water. Leopard sharks aren’t considered dangerous and have very small mouths they use to suck up squid from the ocean floor. Visitors and locals alike grab snorkels and go on their own, or join naturalists from the Scripps Institution of Oceanography for a tour. 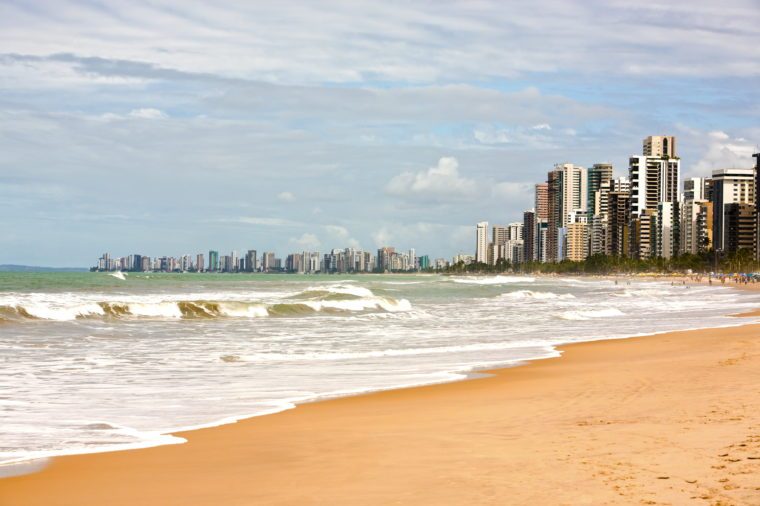 Eighty-two percent of the unprovoked shark bites in Brazil have happened in a relatively small area of the northeast coast near Recife, making it one of the highest areas of attacks per kilometer in the world, according to Chapman and McPhee. But this wasn’t always the case. Shark bites were rare in the area until about 1992, when numbers started to shoot up. Nearby port activity may be one reason why according to Chapman’s study: Construction has displaced aggressive bull sharks and increased boat traffic—sharks are known to be attracted to sounds of boats. Here are the weirdest, wildest sharks in the world. 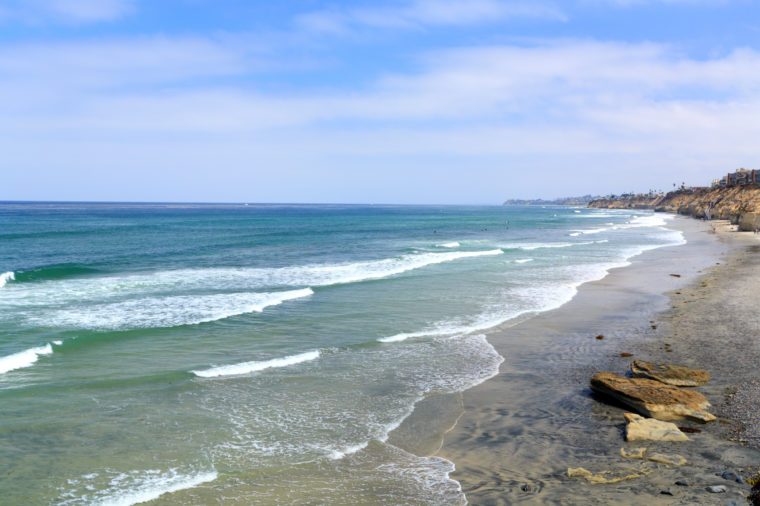 You Touch Pix of EuToch/Shutterstock

California ranks second after Florida for the most unprovoked shark bites in the United States. According to the ISAF there have been 124 since 1837, and the highest number (19) took place in San Diego County, the area of the state where Solana Beach sits. That’s where a swimmer was fatally attacked (most likely by a 15- to 16-foot great white) in 2008, according to news reports. And in 2018 just three miles north in Encinitas, California, a teen boy was bitten while lobster diving. 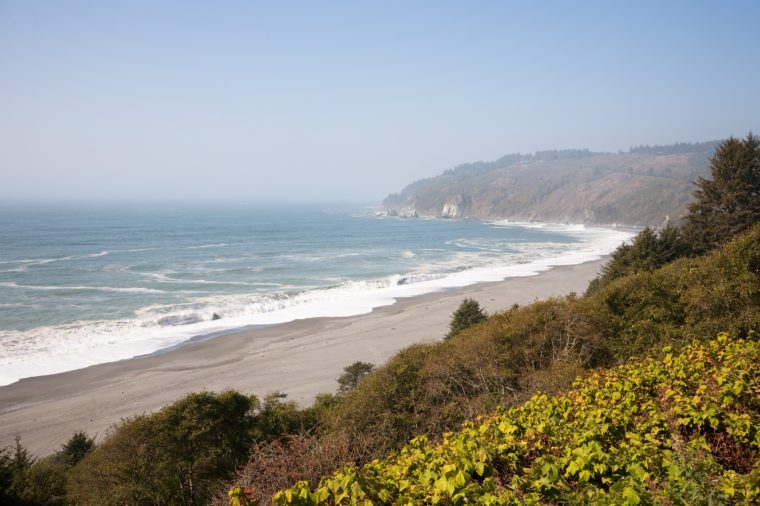 Humboldt County in Northern California is the second-biggest hotspot for shark attacks in the state—there have been 16 since 1837, according to the ISAF. Eureka is a popular surf spot in the area, and is the location of at least two bites in the last decade. According to news reports, two surfers survived great white bites there in 2012 and 2013. Here are some fascinating facts about sharks. 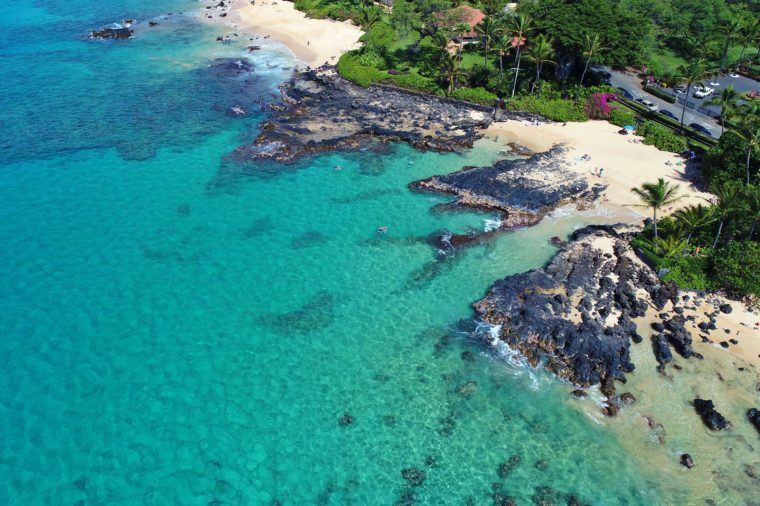 Shark watching, feeding, and cage diving are popular tourist activities in Hawaii—there are a whopping 40 species of sharks living in the waters around the islands, including hammerheads, blacktips, reef sharks, whale sharks, and some lesser-known species like the sponge-head catshark and the rare megamouth. While divers who are part of planned shark tours are rarely bitten, Hawaii has recorded 162 unprovoked bites in the state since the 1800s. Sixty-four have happened off the coast of Maui, including a fatal attack in May of 2019, in which a person swimming about 100 yards from shore was bitten. Before you plan a trip to Maui or any of these beaches, you’ll want to know these 13 facts about shark attacks.