20 of the Most Surreal Natural Phenomena—Explained

Why "shooting star" is a misnomer, what a moonbow is, and more strange natural phenomena. 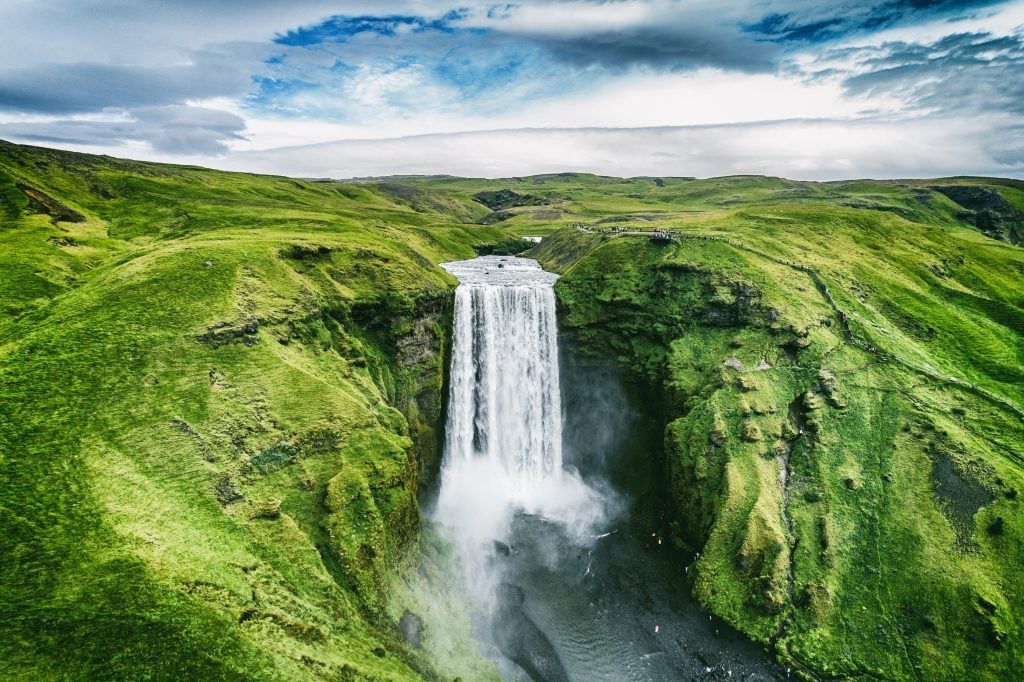 I don’t know about you, but being cooped up in the house has made me yearn for the majesty of nature like I’ve never quite yearned in the past. Sure, prior to quarantine I might’ve gone weeks without seeing moss and not thought twice about it, but now that I cannot venture out of my home to see salt flats or rainbow eucalyptus trees as I please I am simply beside myself. But that doesn’t mean I can’t use this time to educate myself about them—I dare you to try to stop me from marveling at something. Take a look at some of nature’s most dream-like creations, and maybe they’ll earn a spot at the top of your bucket list. 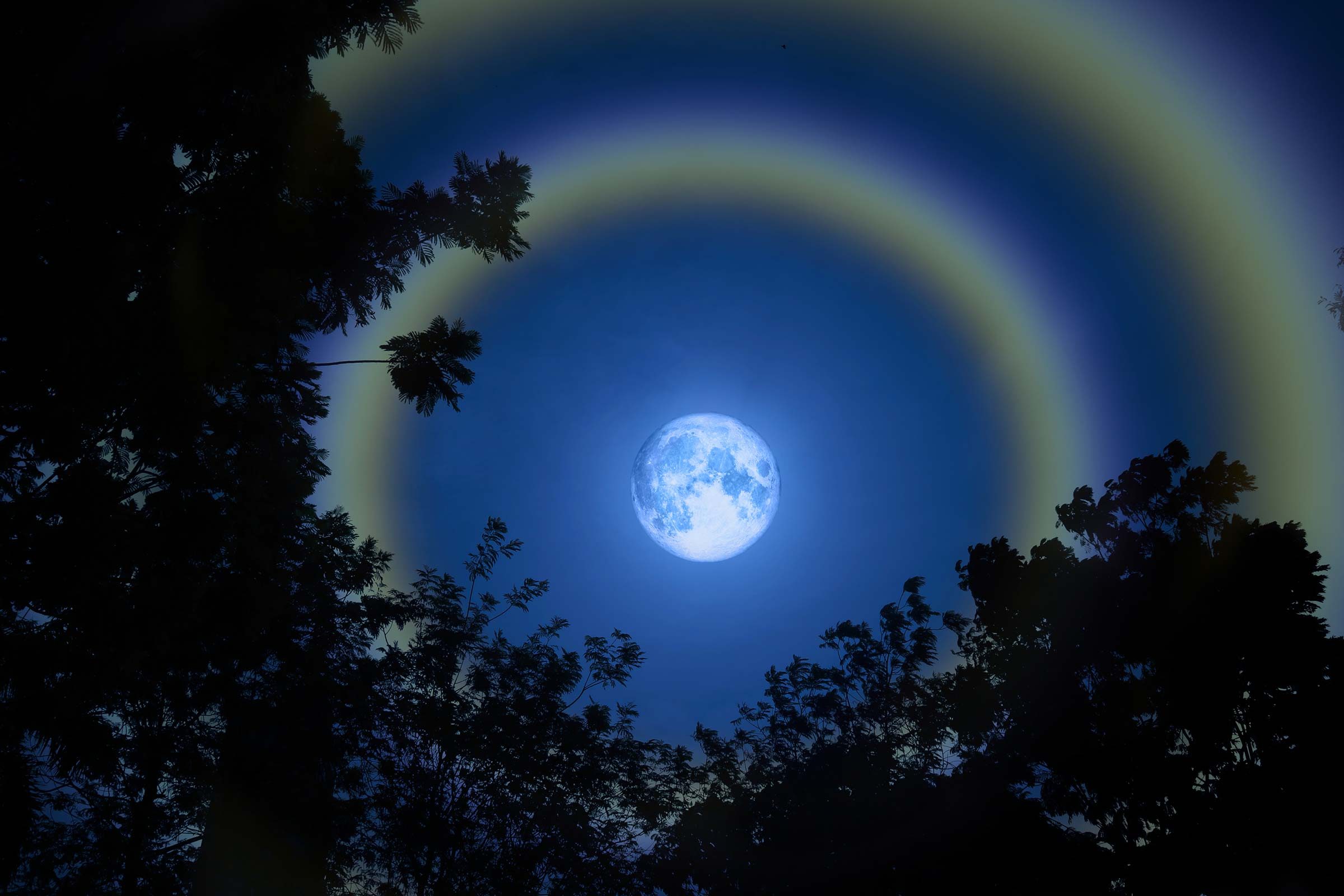 Much like rainbows, these colorful nocturnal arches occur when light (from the moon, in this case) reflects and refracts off water droplets in the sky. But moonbows are much more rare than rainbows—the natural phenomenon happens only when the moon is very low, the sky is dark, and rain is falling opposite the moon. Check out the biggest unsolved mysteries about planet earth. 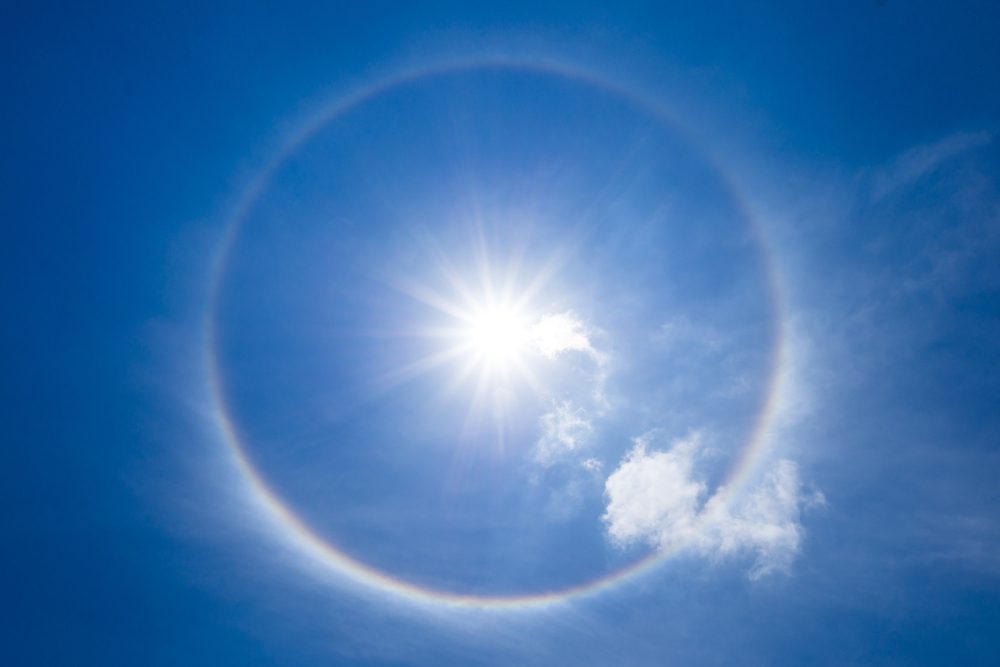 Similar to moonbows, sun halos, or a circle rainbow, form much higher in the sky when light reflects through ice crystals forming a perfect circle. They appear as a large circle of white or colored light around the sun. And if you think these are spectacular, then nature’s optical illusions will knock your socks off. 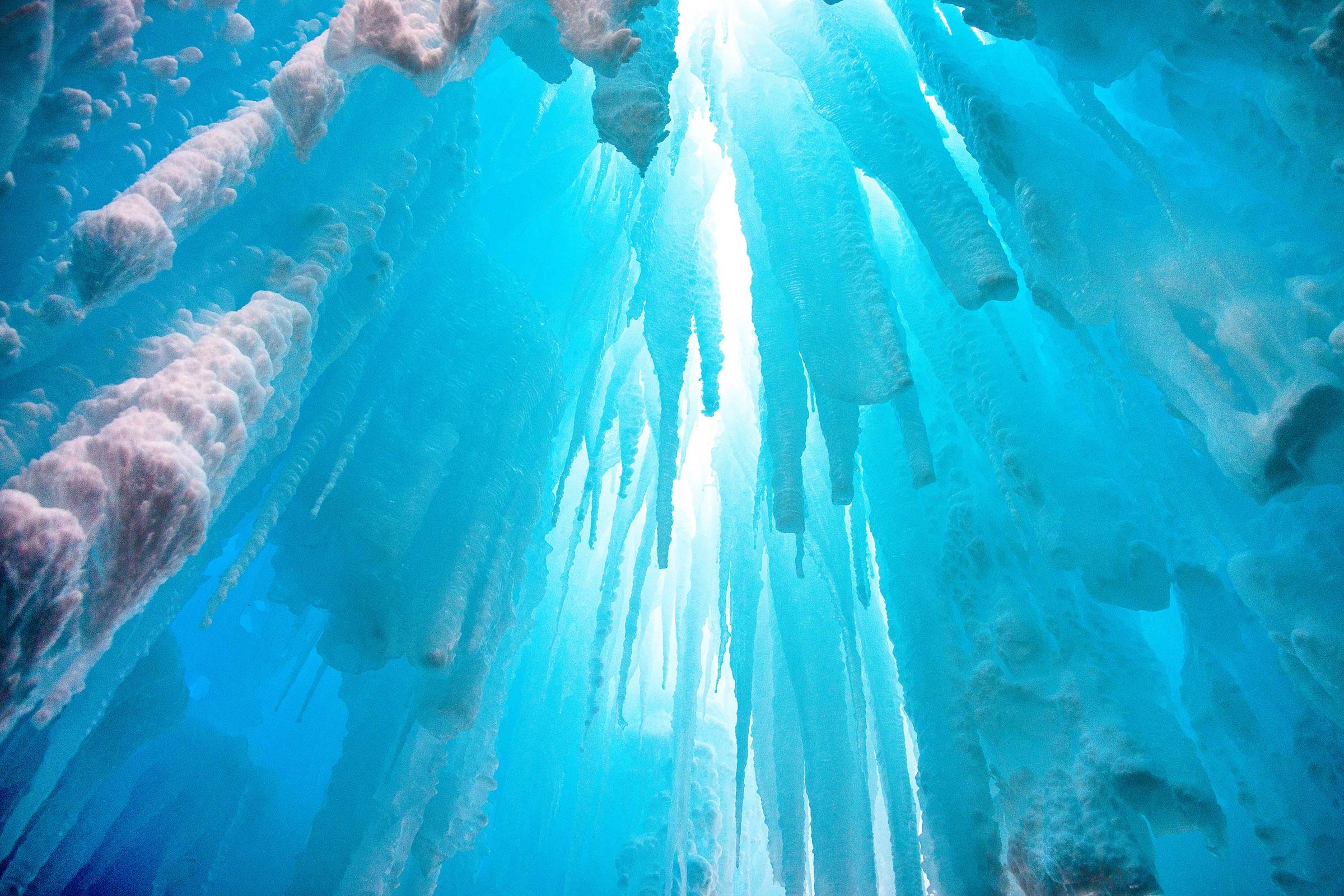 What Alec Baldwin describes on Frozen Planet as “icy fingers of death,” brinicles are underwater stalactites, or hollow icicles, that form when cold salt water freezes. In the right conditions, brinicles can reach and pool on the ocean floor, eventually freezing slow-moving bottom-dwelling creatures like starfish. You probably never learned these crazy facts about the earth in school. 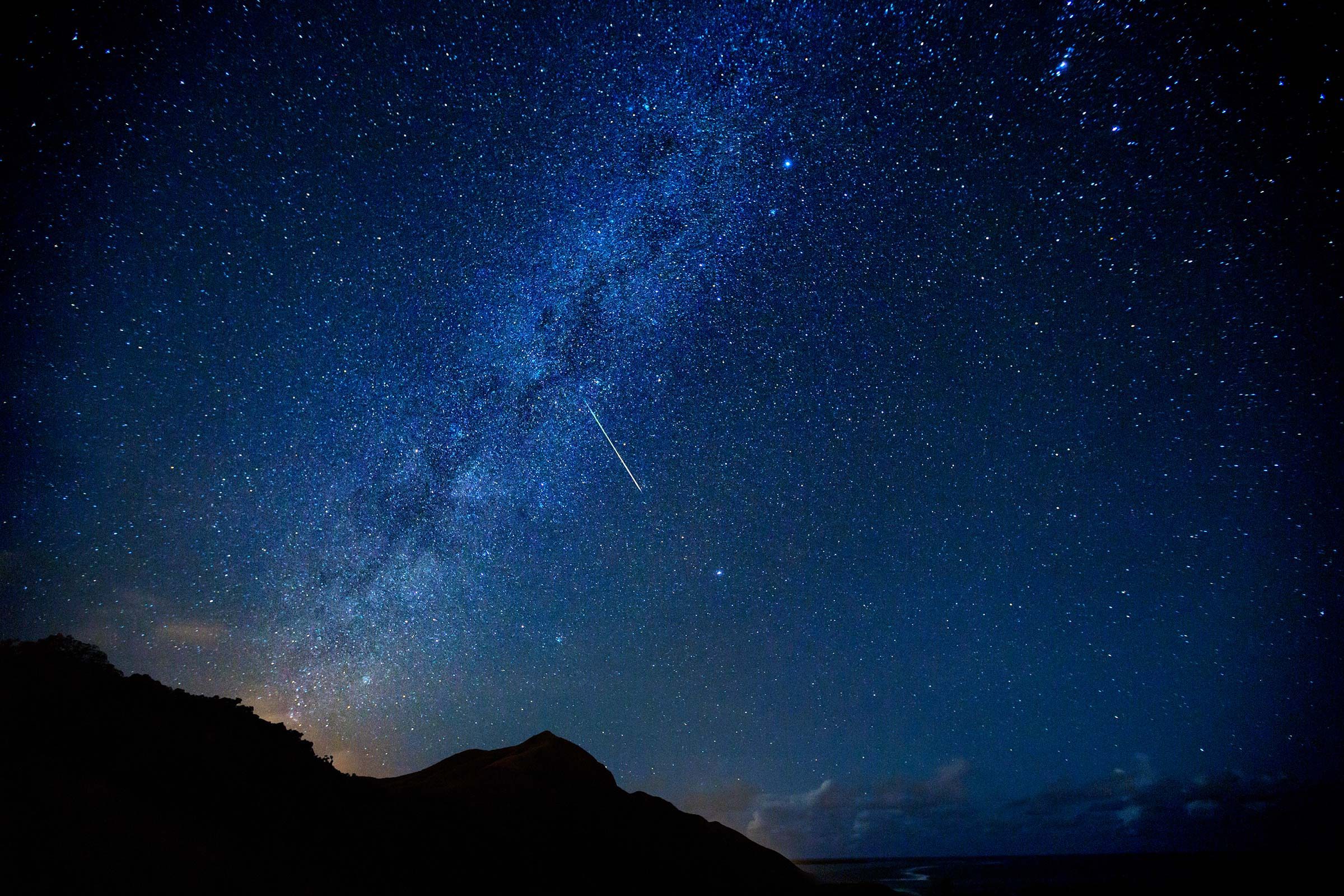 Shooting stars are actually meteors, or small rocks that have entered the earth’s atmosphere. The light you see is the particles heating up and burning. Stargazers can expect to see a shooting star every ten to 15 minutes. 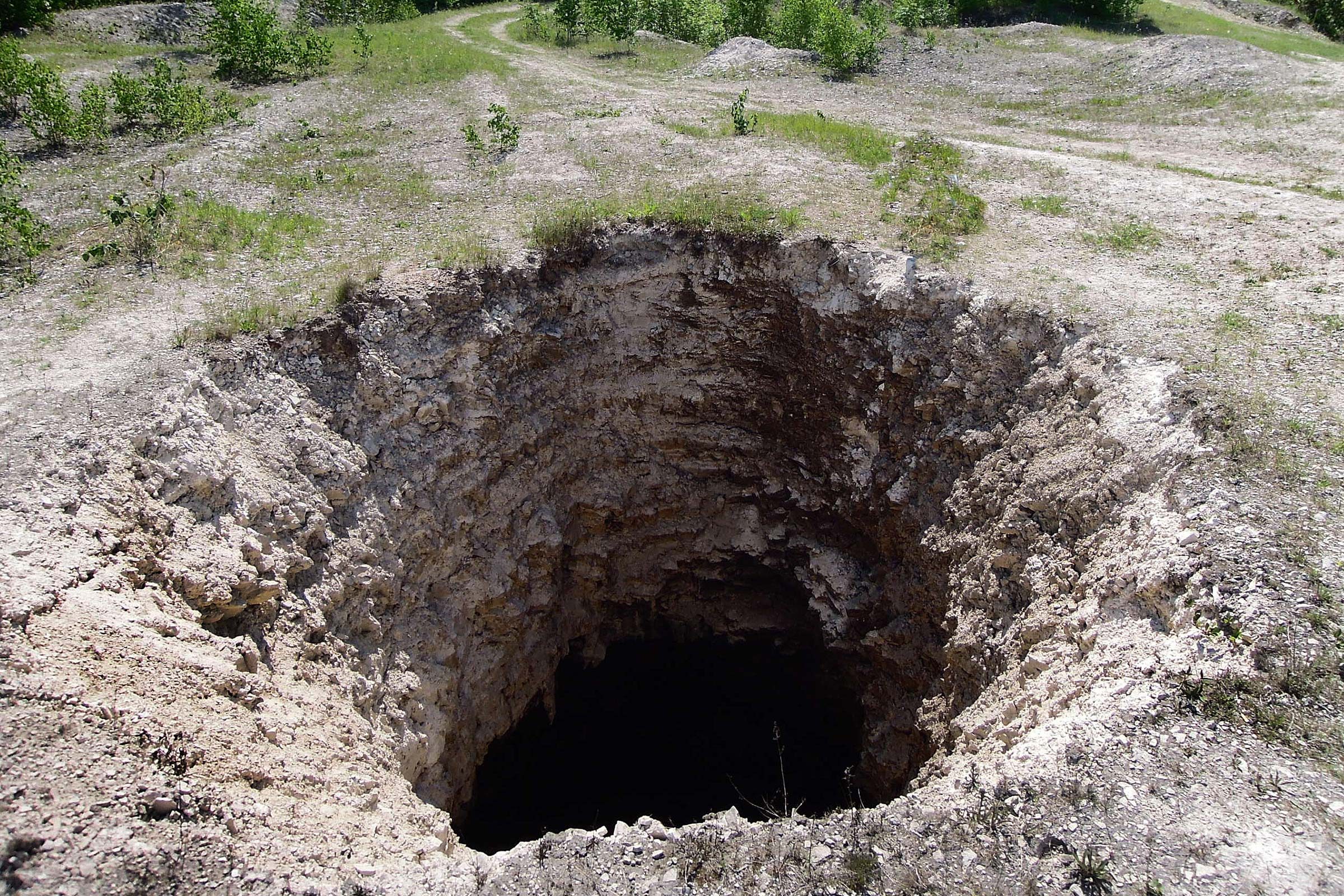 A perfect example of how a natural phenomenon can be dangerous is the Florida man who was swallowed by sinkhole under his bedroom. Sinkholes most commonly occur when water, made acidic by contact with plants or carbon dioxide in the air, erodes soft rock such as limestone, gypsum or dolomite underground, forming a deep cavern. Here are some of the most jaw-dropping from around the world! 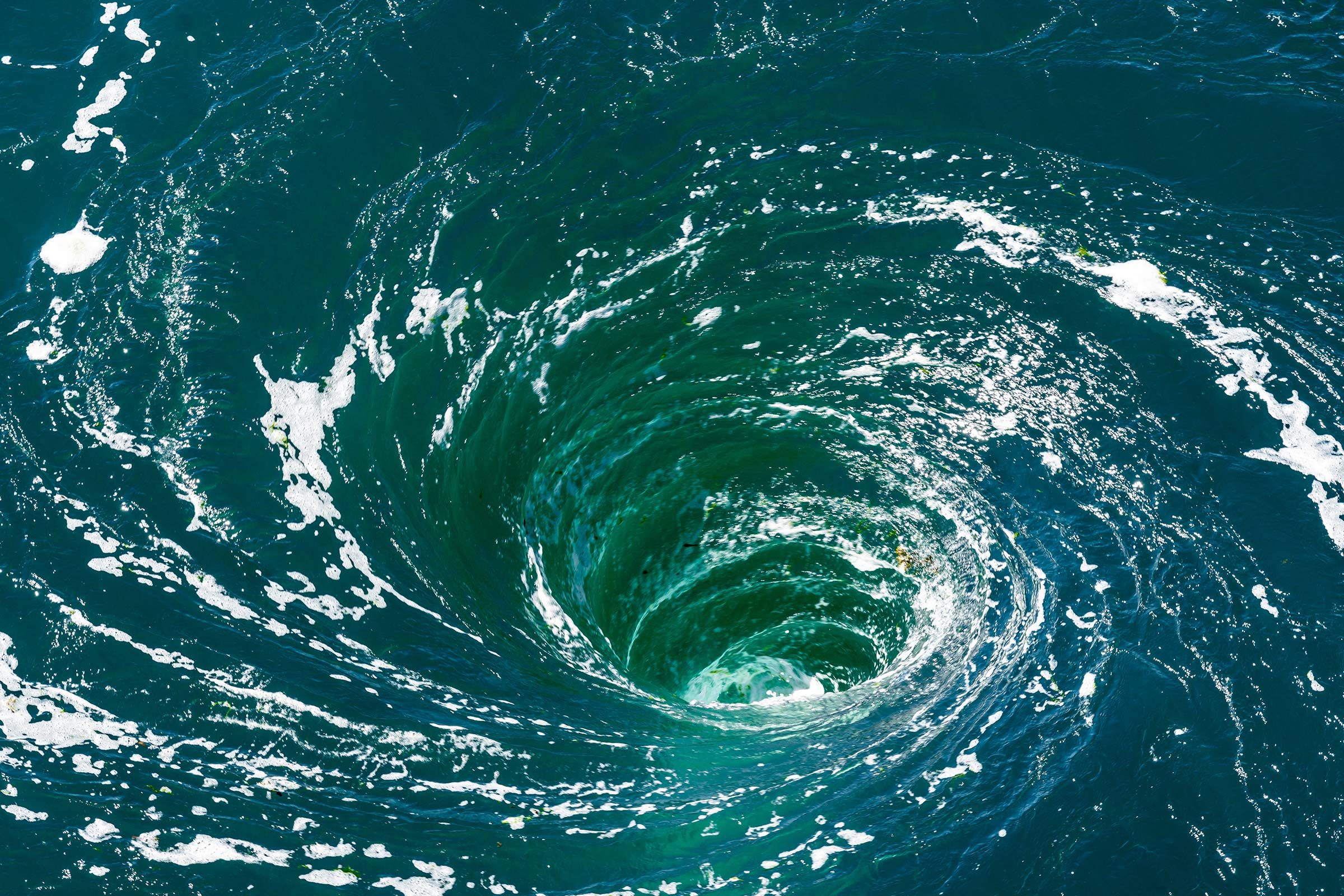 Formed at the meeting of opposing currents, whirlpools are often much more ominous in fiction than in real life. The most powerful whirlpools, called maelstroms, are formed in narrow, shallow straits with fast flowing water or at the base of waterfalls, but the speed of the swirl rarely exceeds 20 mph. Don’t miss these ocean mysteries scientists still can’t explain. 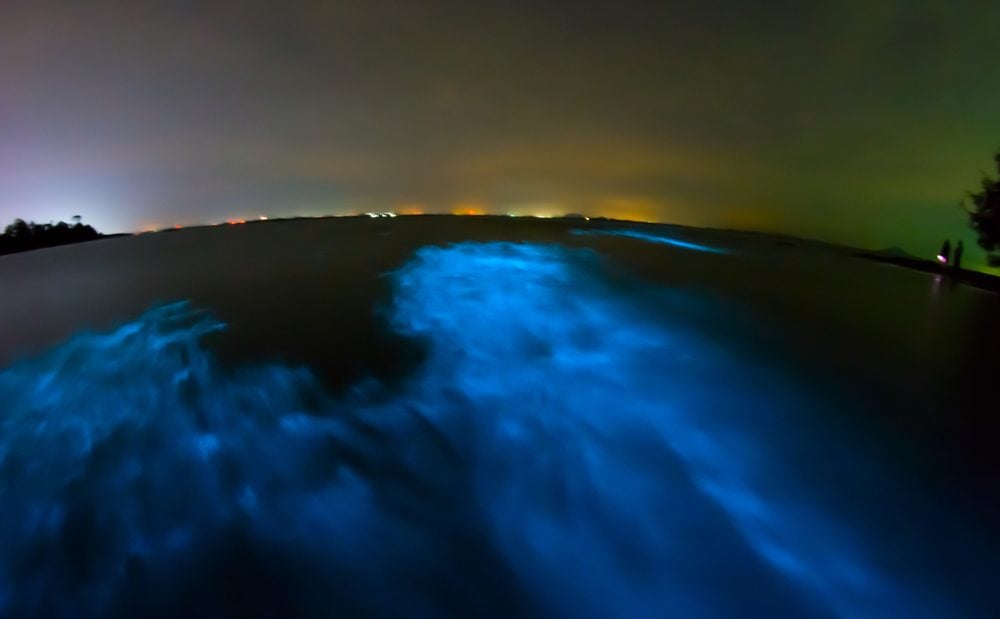 Some beaches around the world glow at night. This natural phenomenon is caused by phytoplankton in the water that gives off light when agitated by the movement of waves and currents. These microorganisms can be seen at beaches in the Maldives, Puerto Rico, the Everglades, and many more around the world. Check out these fascinating facts you never knew about oceans. 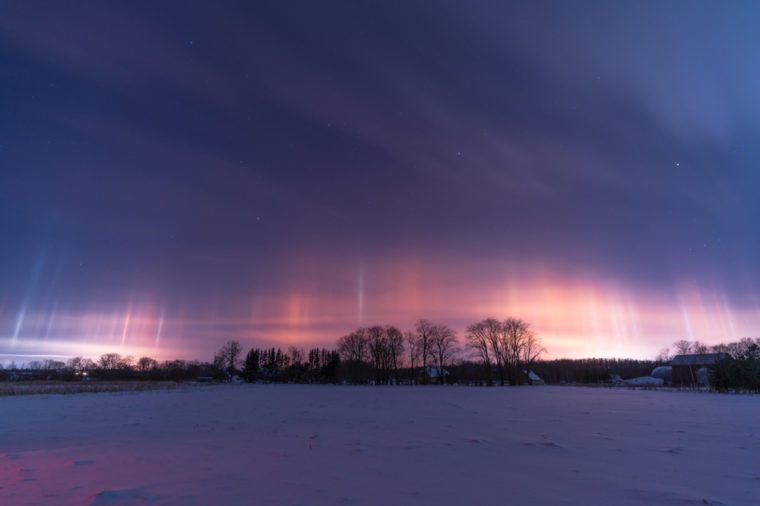 Light pillars are colorful beams of light that shine down from the sky, typically during sunrise. They are sometimes also referred to as solar pillars or sun pillars. Light pillars occur in colder climates when light reflects off of ice crystals in the air. 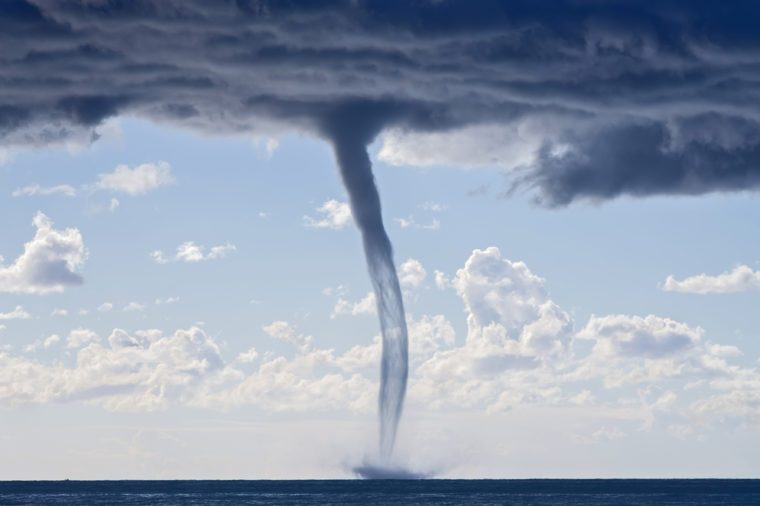 Some might mistake a waterspout for a tornado moving over a body of water, but in reality, a waterspout in a type of cloud. They are rotating columns of air over water and are much weaker than tornados. They mainly occur in tropical and subtropical climates. Find out the  most baffling mysteries about the universe. 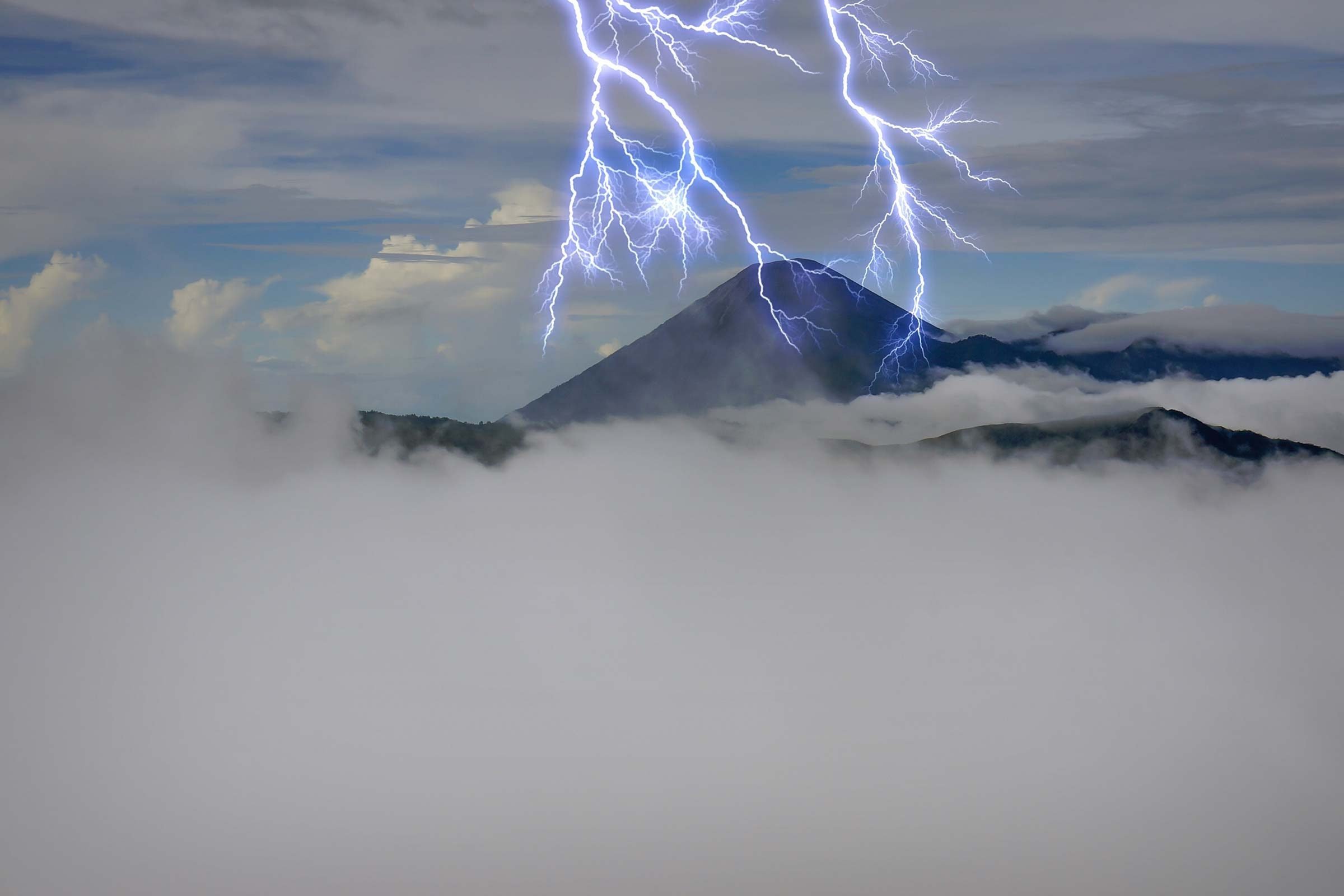 Thunderstorm lightning has nothing on volcanic lightning which appears during a volcano explosion. This lightning forms in the volcanic plume—the cylinder-shaped column of volcanic ash—after it erupts, according to National Geographic. The particles that make up the plume compress underground. Once these particles eject above ground the density changes. Plus, the friction between particles charges them. They separate as they go up, creating space for electricity or lightning to flow between particles, per National Geographic. Here are eight unbelievable natural disasters you never knew occurred in the United States. 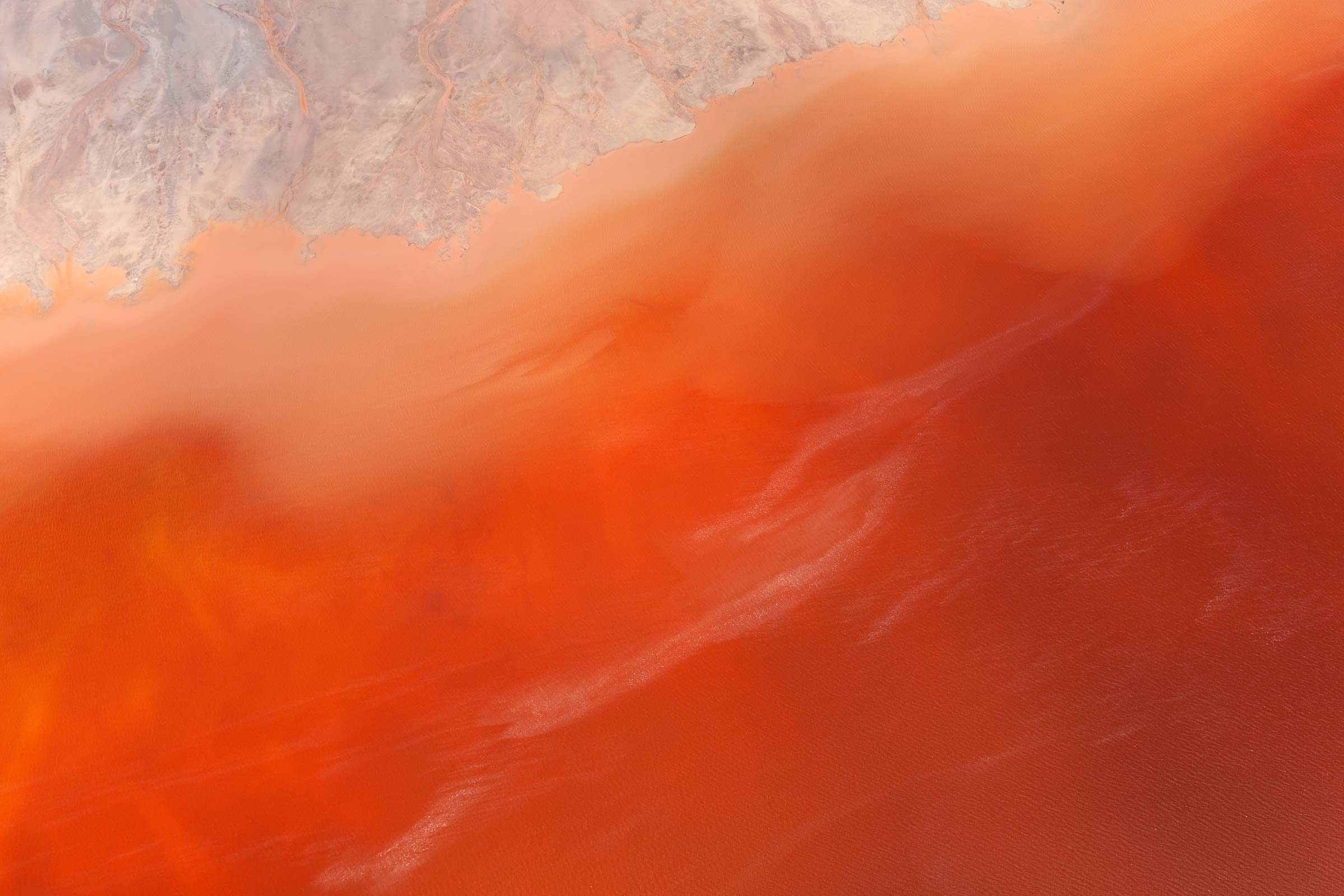 In Antartica, there are the famous Blood Falls—a blood-red waterfall pouring out of the Taylor Glacier in the McMurdo Dry Valleys. Scientists and geologists first thought the red color is because of algae, according to Atlas Obscura. Research by the University of Alaska Fairbanks, however, found the red color is thanks to oxidized iron in the brine saltwater. We see the falls thanks to a fissure allowing the water to flow from the small, trapped body. This natural phenomenon is likely one of the science facts you never learned in school. 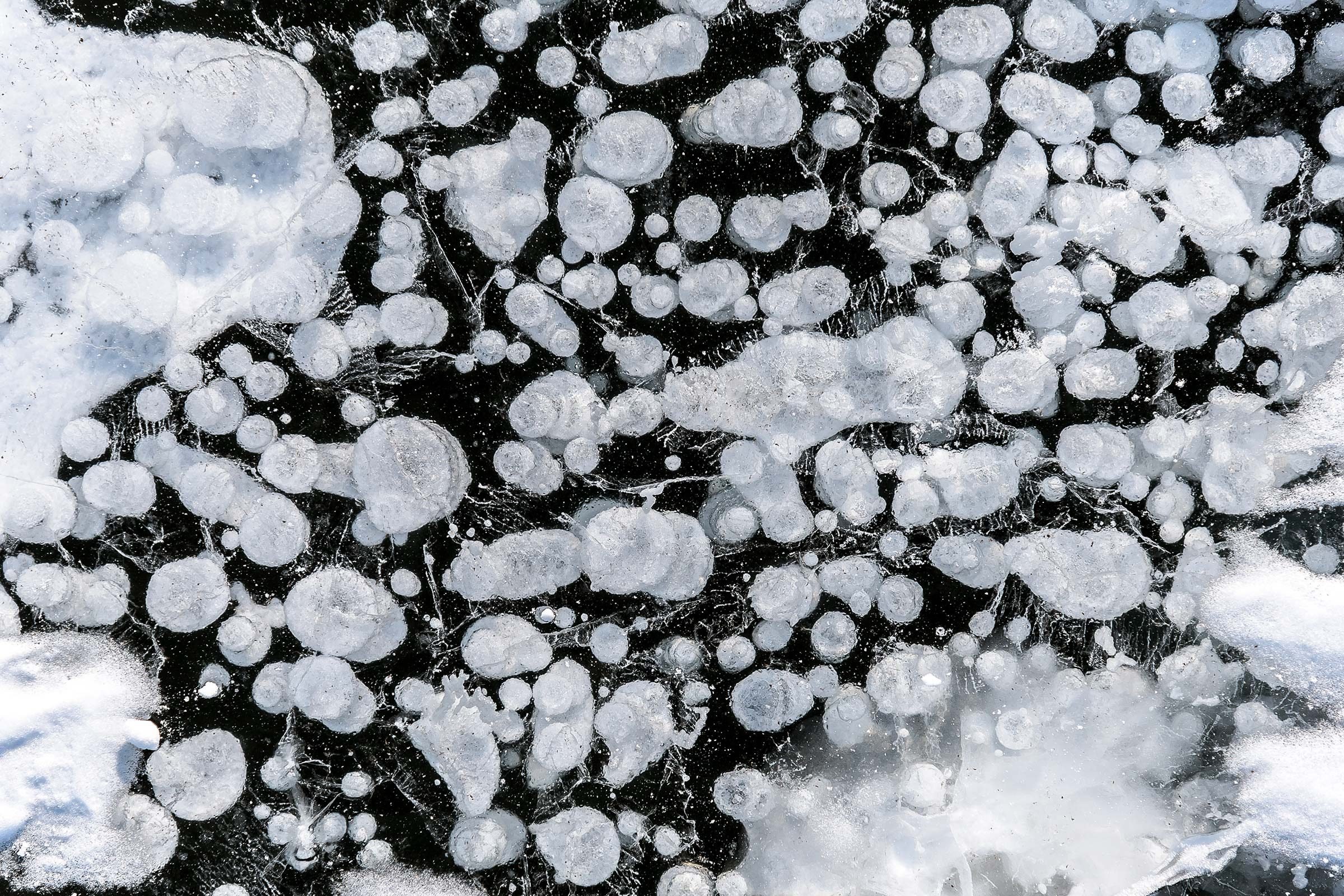 Alberta Canada’s Lake Abraham features some beautiful frozen, trapped, bubbles of methane. Methane bubbles form in water when bacteria feasts on leaves and animals in the water. The bacteria eat the matter and “poops” out methane, which turn into floating bubbles in frozen water, according to Smithsonian Magazine. This natural phenomenon will make you want to check out these 11 other stunning photos that will make you appreciate the beauty of life. 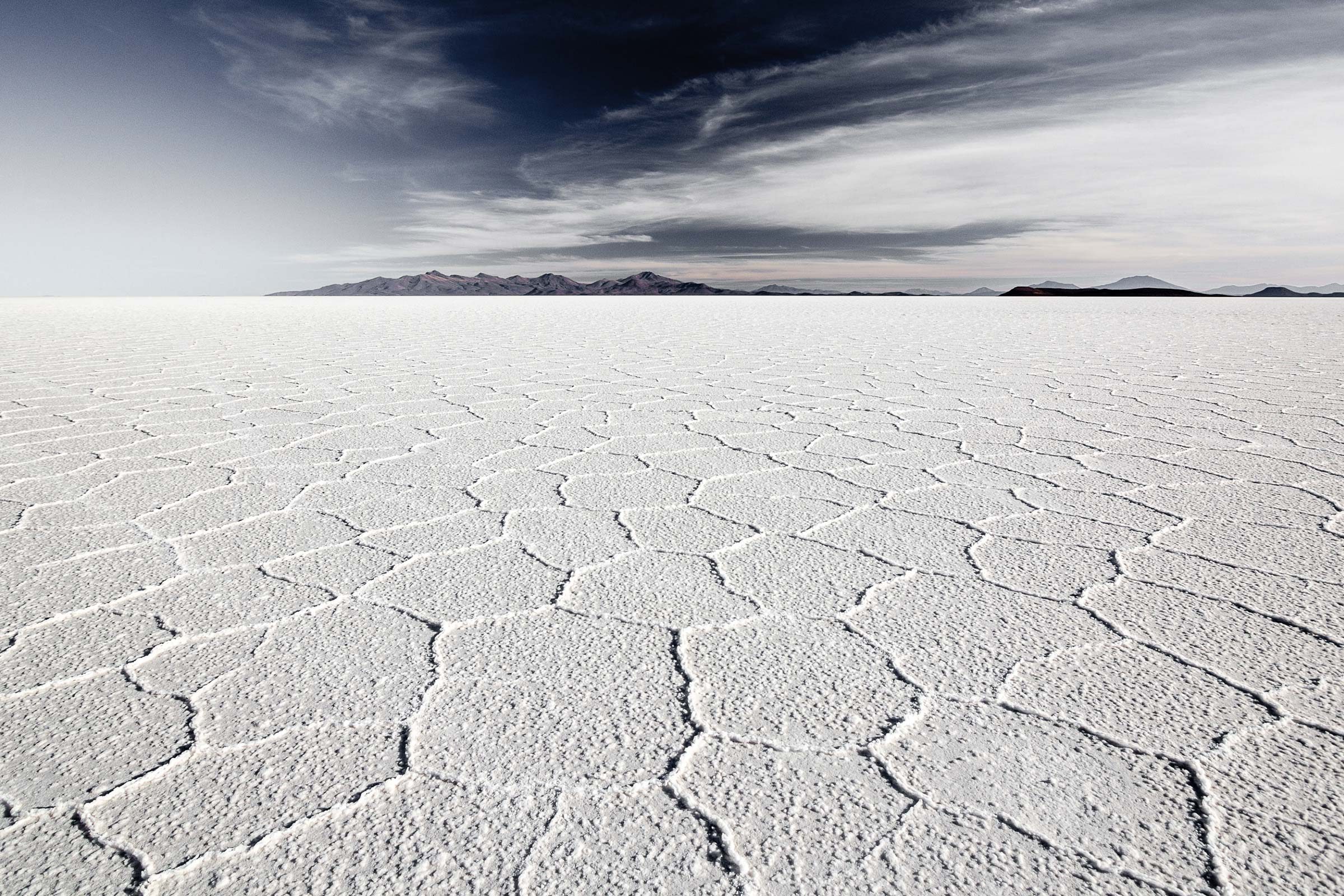 There are some well-known and beautiful salt flats in Bolivia and Utah. No matter their location, salt flats are all thanks to the evaporation of water and the concentration and precipitation of salts and other minerals dissolved in it, according to the New York Times. They can differ in their water source which could be a lake, groundwater, or one of many other water sources, per the Times. 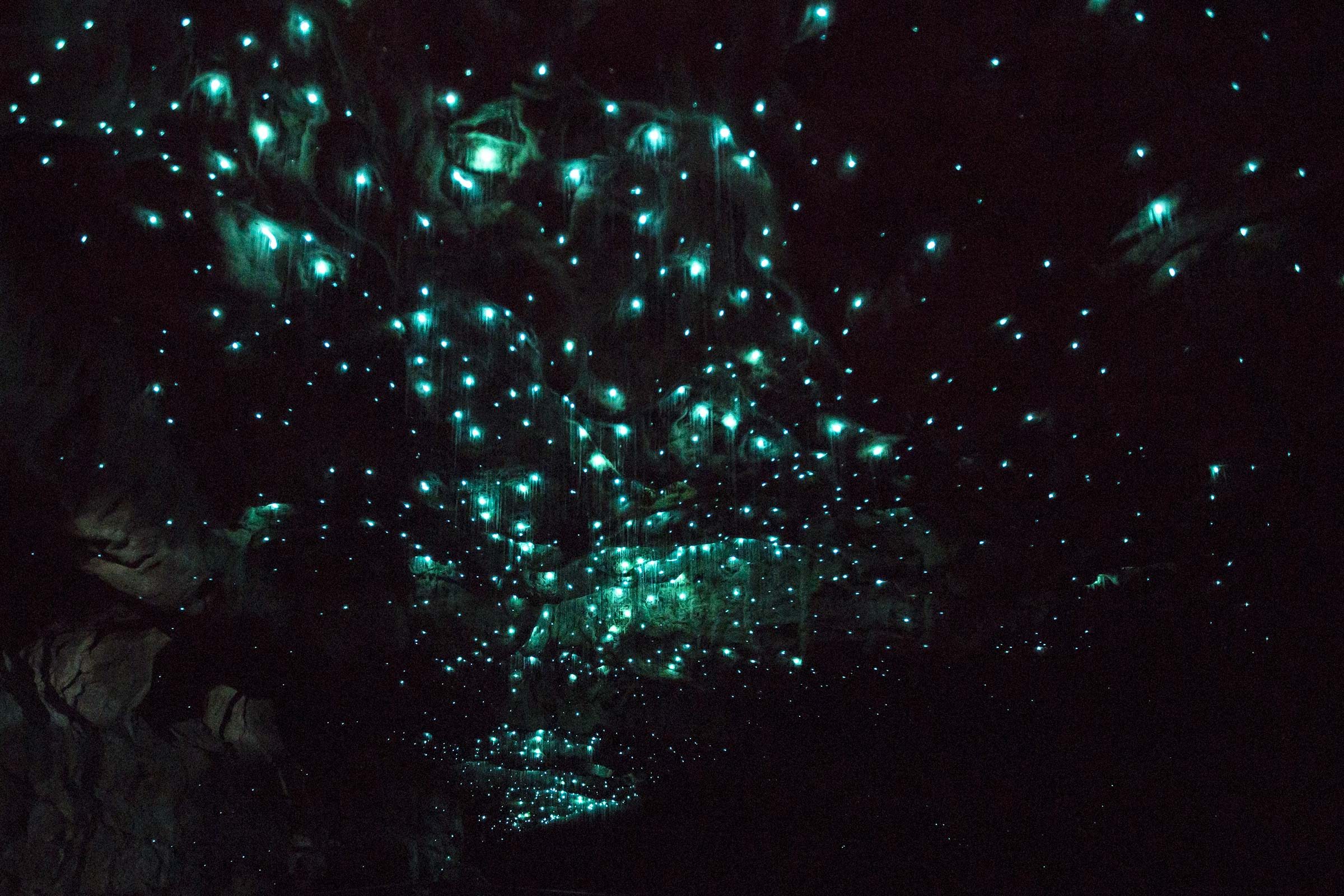 Even worms, although small and slimy, are a natural phenomenon—especially glowworms and their caves. Most of these caves are in New Zealand and Australia, and there is also a famous one in Alabama. The Waitomo Caves in New Zealand are the most well-known, having formed more than 30 million years ago. The science behind the glowworm caves is interesting. In fact, they technically aren’t “glowing worms.” According to the New York Times, fungus gnat eggs hatch, their larva constructing mucus. That mucus coughs up silk strings collecting droplets of more mucus. This is the net that illuminates and attracts flies or other victims for the worms, per the Times. 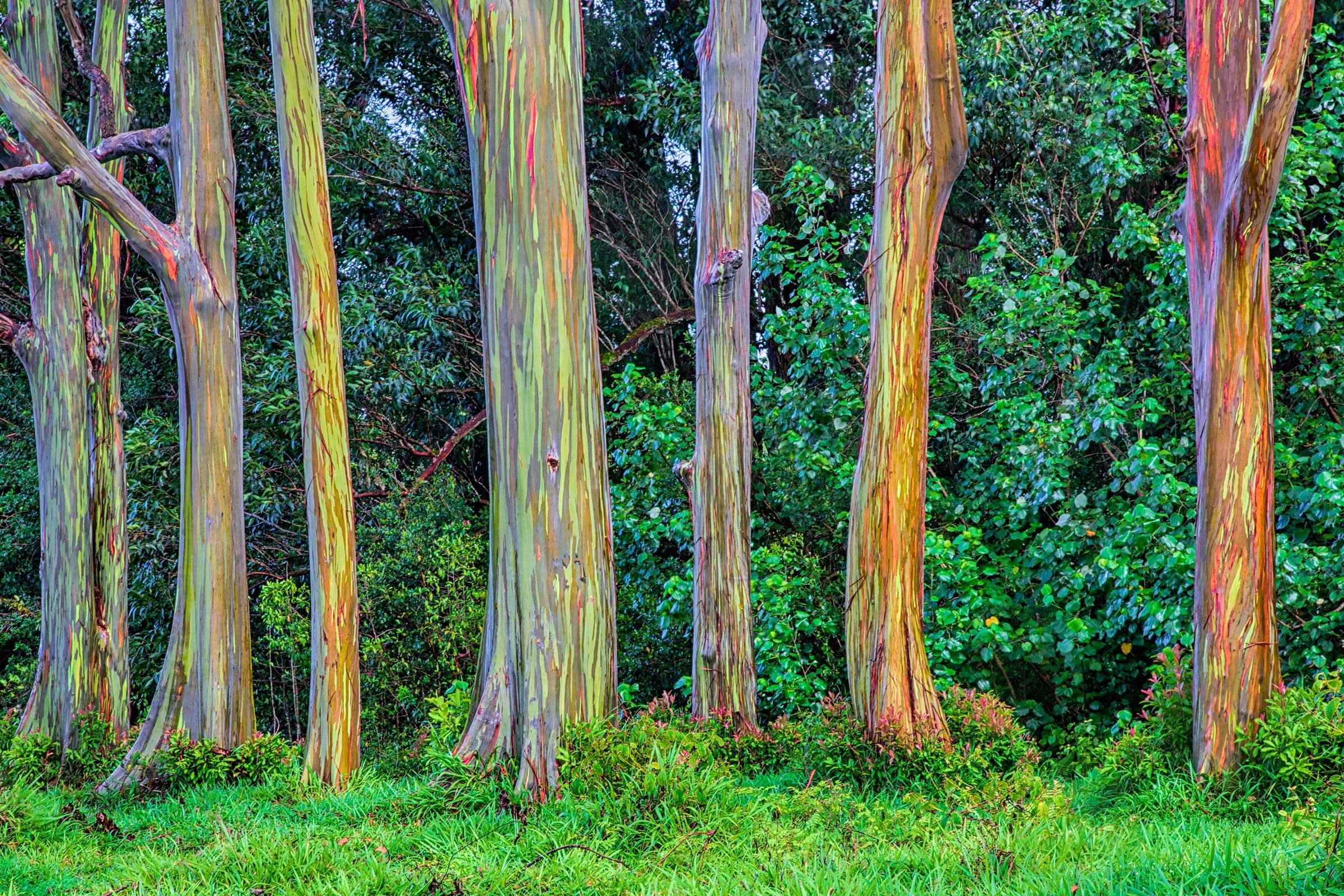 Rainbow eucalyptus or rainbow gum hails from the Philippines and Indonesia. The colorful tree stripes are actually strips of old and new bark. As the thin bark layers peel away, they reveal younger ones with brighter colors. The youngest bark is green then purple, red, and brown as the tree ages and loses chlorophyll. Eventually, the bark becomes totally brown again before repeating the shedding cycle, according to nature.com. These trees are a natural phenomenon and one of many colorful natural wonders on earth. 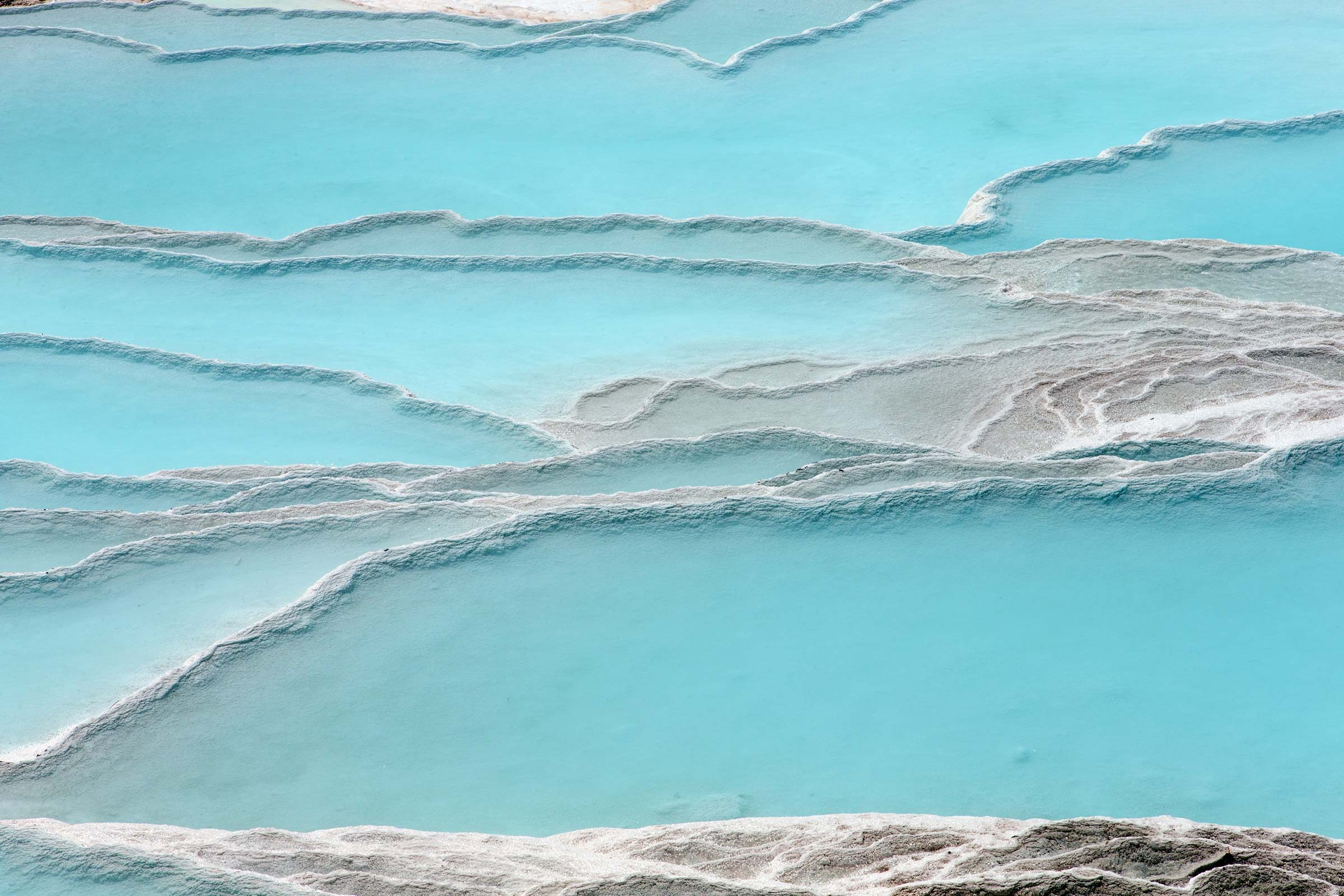 Travertine, forms as a result of calcium carbonate precipitation from geothermal waters, according to the University of Waikato. The travertine builds up forming terraces over time. When hot water full of carbon dioxide flows through limestone, it dissolves. It carries calcium carbonate to the surface of the travertine, per Atlas Obscura. Still, more research shows there might be other reasons for their formation. Bacteria in the water could catalyze the minerals, forming the terraces, according to Science Magazine. 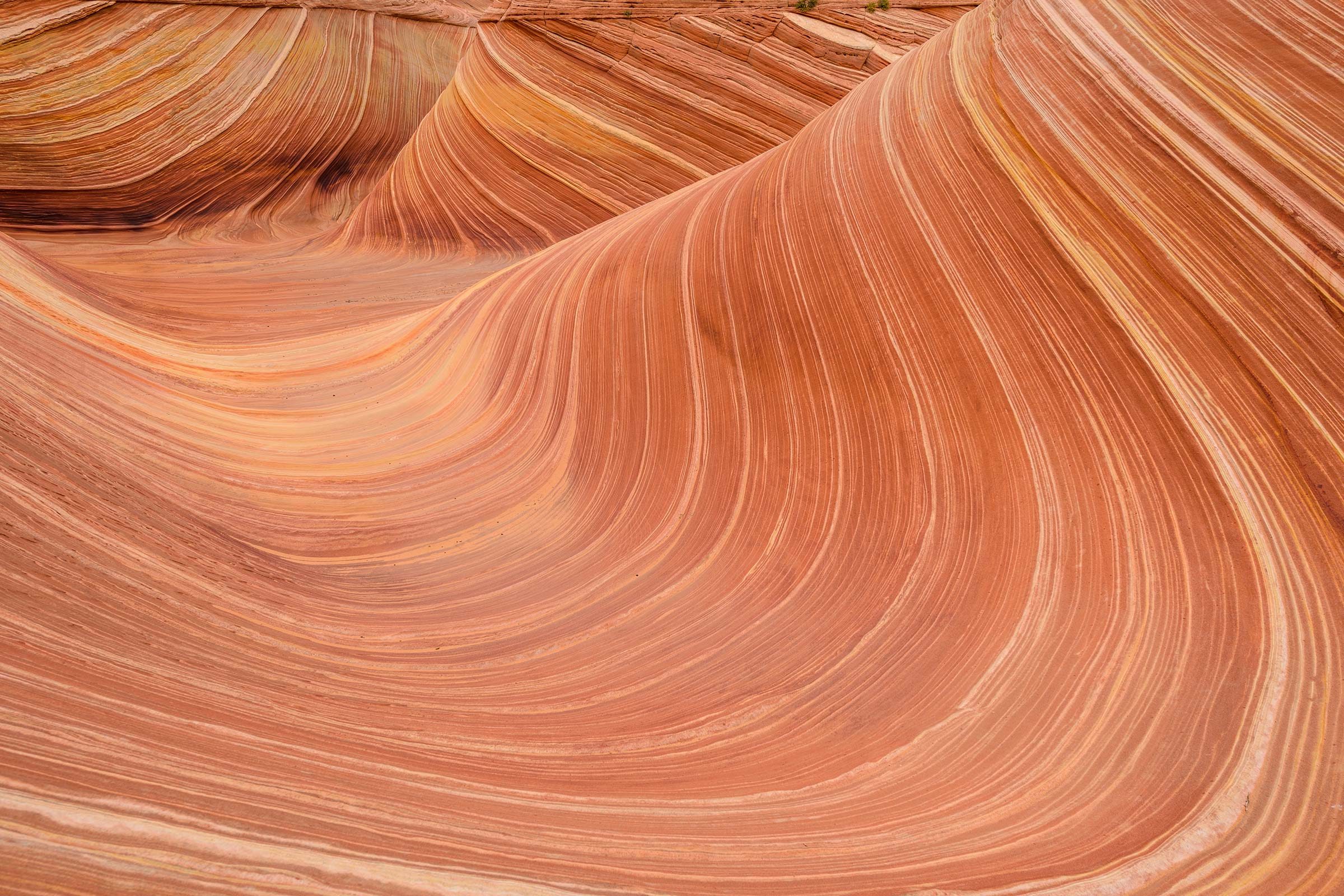 Originally dunes in Arizona from more than 190 million years ago, “The Wave” includes intersecting throughs of sandstone turned to rock. According to Atlas Obscura, the dunes form vertically and horizontally, and slow erosion thanks to wind and rain over time reveals their wave-like look. Sandstone waves are a must for avid hikers, especially in the American Southwest. Also a must: these 6 iPhone apps for nature lovers. 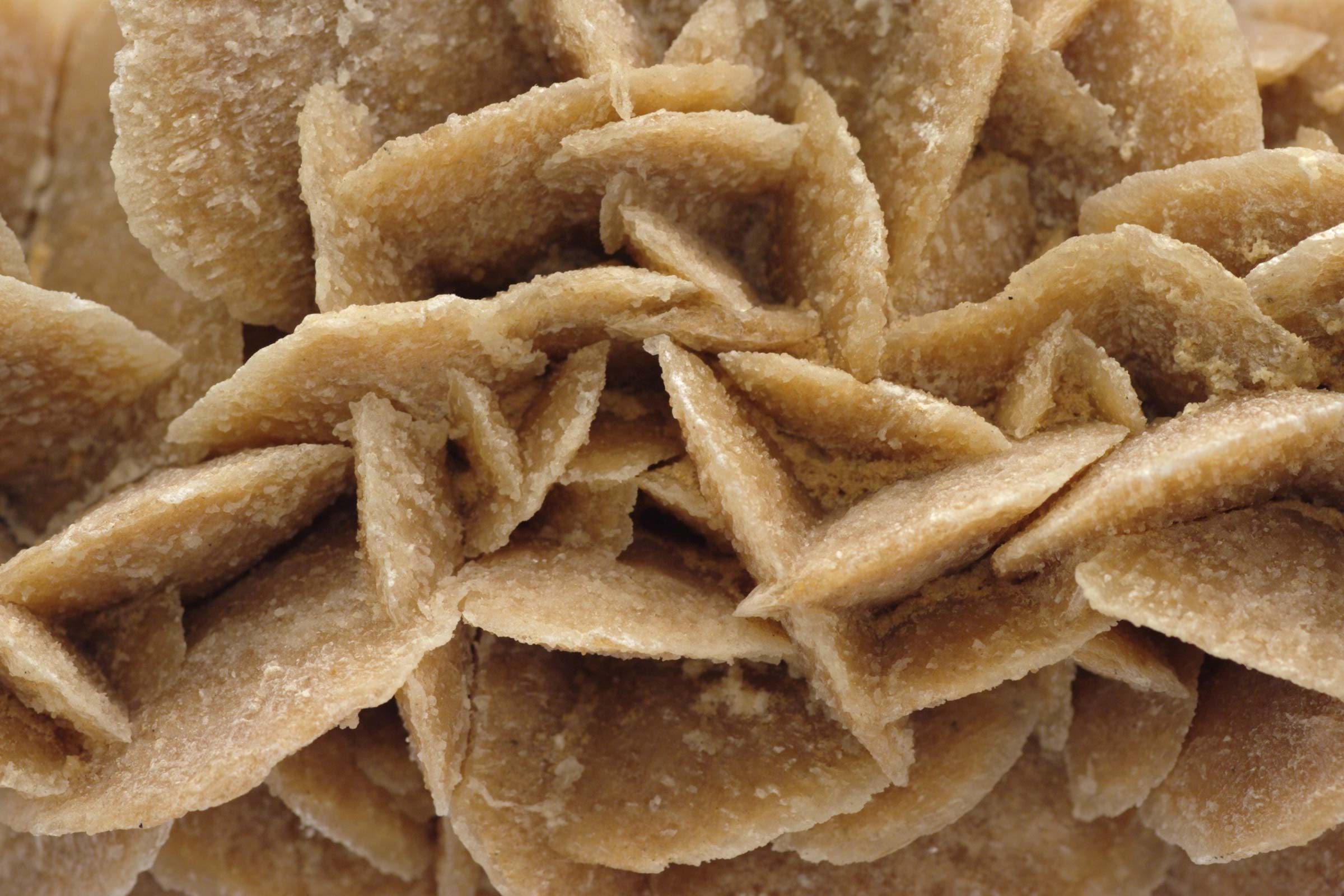 Desert roses are a special crystal group formed by rain or flooding in desert regions where there are trapped sand particles. Switching between wet and dry conditions forms the crystals while trapping grains of sand. Although most form from gypsum, baryte and celestine roses exist, too. 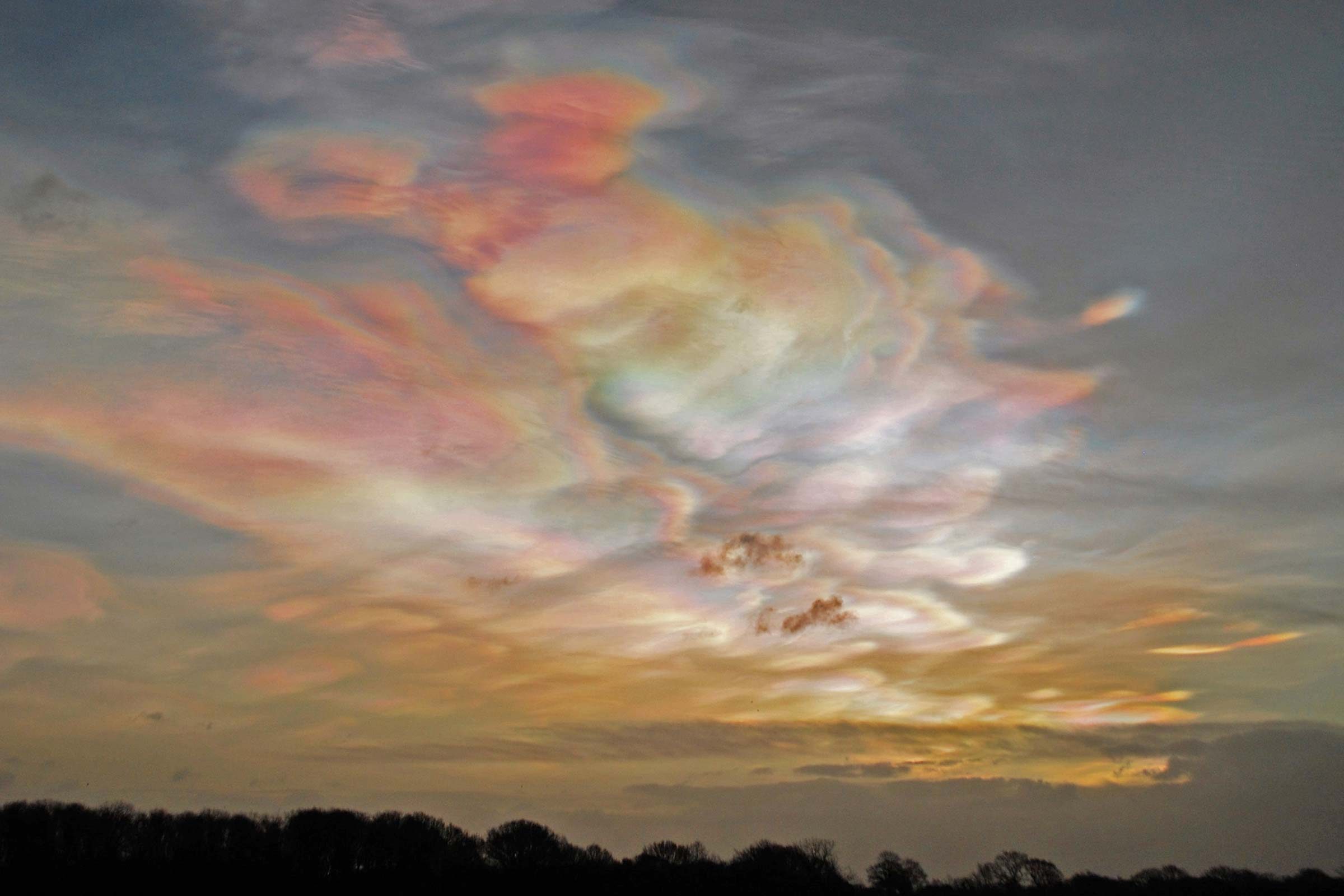 Nacreous clouds look like light waves of various colors. They are rare since they’re only visible within two hours after sunset or before dawn. However, they’re more common during winter time in places where there are high altitudes, like in Antartica, Scandinavia, Iceland, and Canada. Here are 11 perfectly timed nature photos that look fake but aren’t. 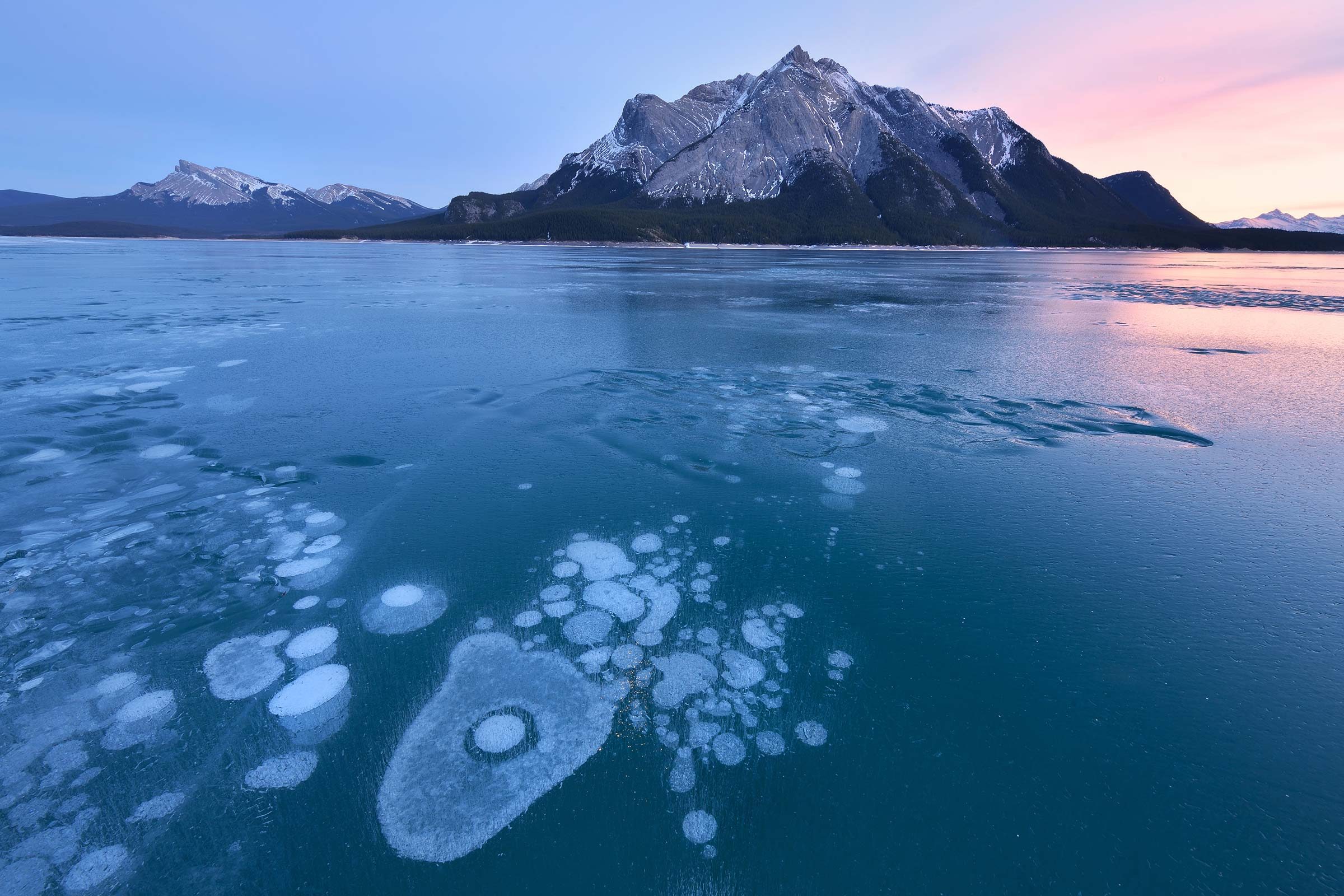 This natural phenomenon is thanks to frozen, trapped methane, similarly to the bubbles in Lake Abraham. Heating these larger-scale bubbles results in huge bursts, according to Business Insider. The warming temperatures in Arctic zones thaw the ice, releasing the gas and explosions. This is a relatively new scientific development, but these 17 old science “facts” are actually not true.