Twins Separated at Birth: 12 Real Stories That Will Give You Goosebumps

Imagine discovering as an adult that another person has been living an entirely different life with your face, temperament, and genes. 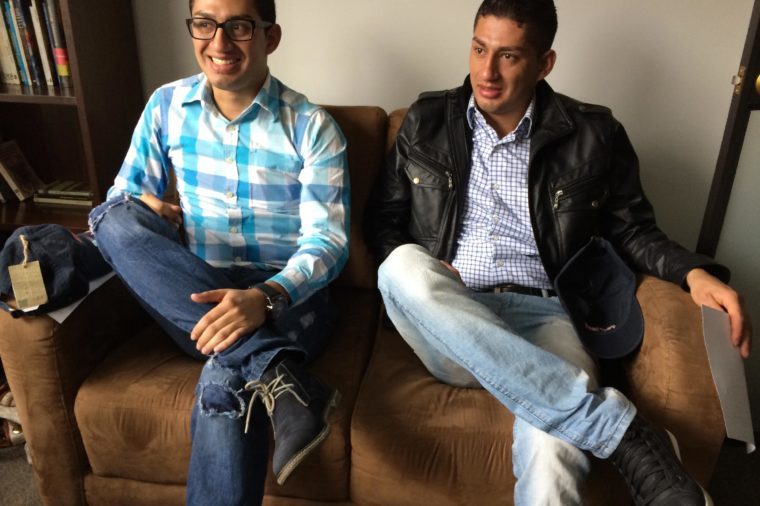 Two women visited a butcher shop in northern Bogotá, Colombia, in 2013. One of them greeted her friend William, the man behind the counter; the other woman was sure she recognized the same man as Jorge, a colleague from her office. She was wrong, but she later showed Jorge photos of William, and as he browsed through the other man’s Facebook photos, he was amazed at the similarity. Jorge’s amazement became bewilderment though, when he saw one particular photograph on William’s feed, showing the man who looked exactly like himself next to a man who looked exactly like his own fraternal twin brother. Read on to see what happened next in this story of twins separated at birth. 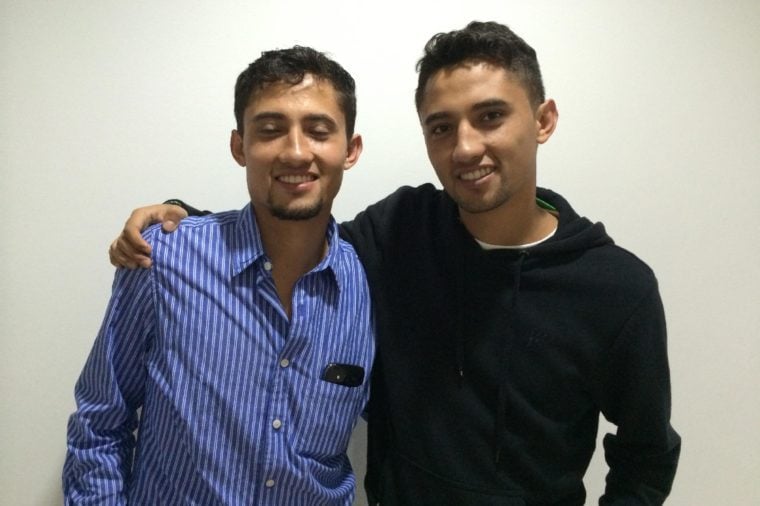 Both Jorge and William had grown up with what they believed were their fraternal twins, Carlos and Wilber, and when they found each other it was clear that they had actually been two sets of identical twins who got mismatched. Because of digestive problems, infant Carlos had been moved from the rural hospital where he was born to the Bogotá hospital where the other set of twins was born, and somehow got switched with William during the first days of their lives. The four men—age 24 when they discovered each other—began an intense process of getting to know one another and found that the identical twins shared more traits than the brothers who had grown up together. “One pair always thought that the bumps on their noses were due to a fall, and when they met their twin they knew it was a genetically influenced trait,” says Nancy L. Segal, PhD, a psychology professor at California State University in Fullerton who has written several books about twins, including a recent one,  Accidental Brothers, about the Castro and Velasco brothers. “In the other pair, both were very fashion-conscious, despite one being raised in the country and the other in the city.” Here are more fascinating facts about twins. 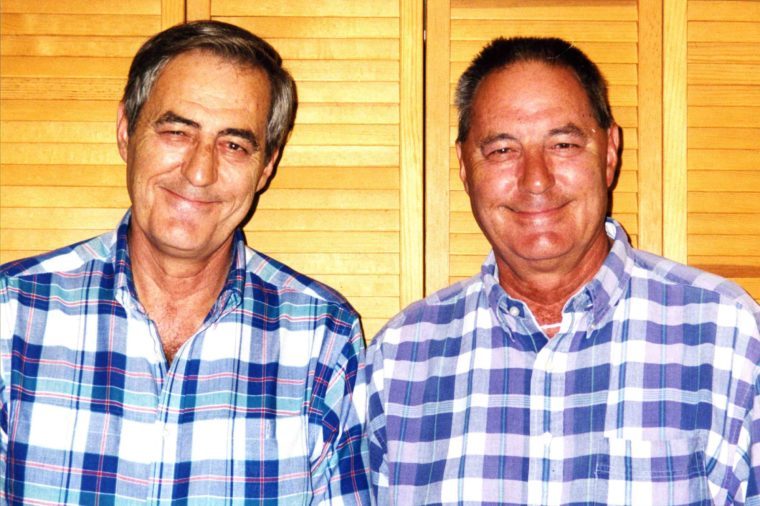 Twins who reunite after being separated at birth provide a very rich field of study, helping researchers like Dr. Segal tease out which aspects of personalities, appearances, and physical conditions are most influenced by genetics rather than environment—the old nature-versus-nurture debate. When the then-39-year-old “Jim twins” met one another in 1979 after having grown up separately in adoptive families about 40 miles away from one another in Ohio, they shared a remarkable number of habits and experiences: Both had married women named Linda, divorced, and married women named Betty; both suffered from bad headaches, smoked Salem cigarettes, drove blue Chevrolets, and had named their first sons James Alan and James Allan. “I do not regard these really as coincidences,” says Segal, also the author of Twin Mythconceptions: False Beliefs, Fables, and Facts About Twins. “Rather, they’re genetically influenced commonalities that may ‘masquerade’ as coincidences.” Media reports about the Jim twins separated at birth inspired a psychologist named Dr. Thomas Bouchard to start a 20-year investigation called the Minnesota Study of Twins Reared Apart (MISTRA), which Nancy Segal worked on for several years. 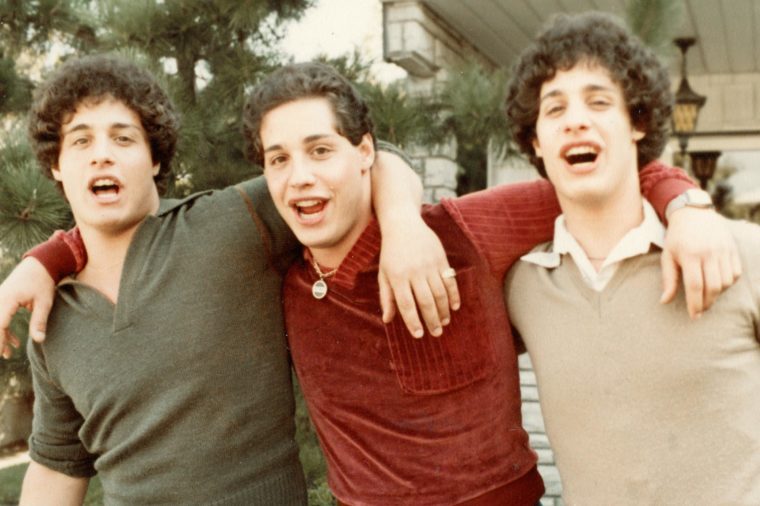 These identical triplets also participated in the MISTRA study after they found one another in 1980 at age 19—Robert started attending college in upstate New York and was approached by multiple people who greeted him and called him Eddy. When he met Eddy, it was clear they were brothers who had been separated (they had both been adopted and shared a birthday), they were featured in newspapers, which David saw, leading him to get in touch as well. The triplets moved into an apartment in Manhattan together and were popular around New York’s social scene, even opening a restaurant called Triplets. A film about their experience (Three Identical Strangers) won a special jury prize for documentary storytelling at the 2018 Sundance Film Festival—it describes how the brothers’ initial happiness at finding one another led to the disturbing discovery that the adoption agency that handled their cases had purposefully separated them in order to facilitate a study of multiples growing up in different circumstances. Their parents had never even been told that they had brothers. 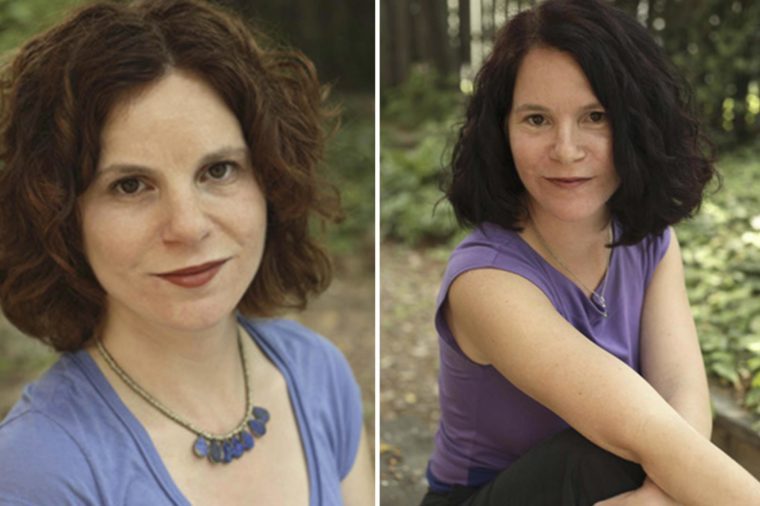 A set of twins separated at birth adopted through the same agency, Paula and Elyse didn’t know they had a twin until they were 35 years old. Elyse had contacted the adoption agency looking for information about her birth mother and found out about her sister. The agency passed Elyse’s information to Paula, and the two met up and eventually wrote a book called Identical Strangers, about the experience of getting to know a person with 100 percent matching DNA. For the book, they interviewed the psychiatrist who conducted the separated-twin study without informing the families of its true purpose. They found him not at all apologetic about having kept them from each other purposefully. (In the early 1980s, New York state began requiring adoption agencies to keep siblings together.) Don’t miss the story about twins born with different skin colors. 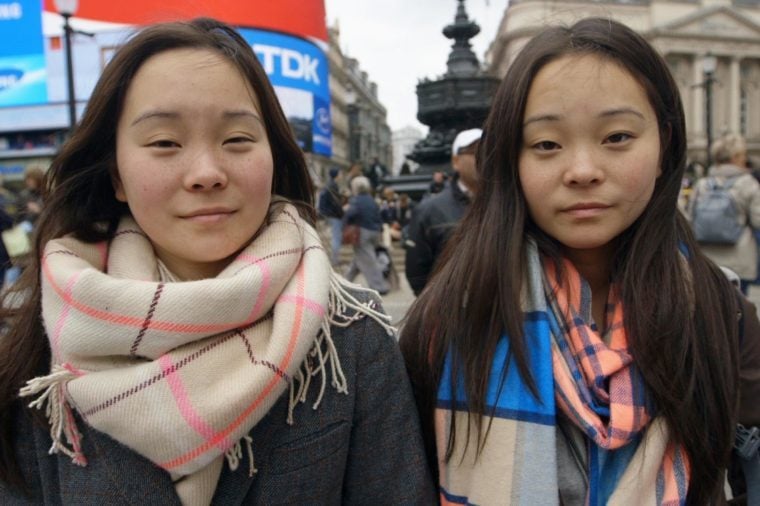 While separated twins who grow up near one another have found their siblings because of coincidences, the rise of social media has made geographic locations less relevant. Samantha and Anais were born in South Korea and adopted by families in the United States and France. When Anais was living in London in 2013, she happened upon a YouTube video starring Samantha, who was an actress in Los Angeles and was amazed at how similar they looked. She investigated further, found out they shared the same birthday and were both adopted, and got in touch. The sisters released a documentary called Twinsters about the experience in 2015 that can be streamed on Netflix. 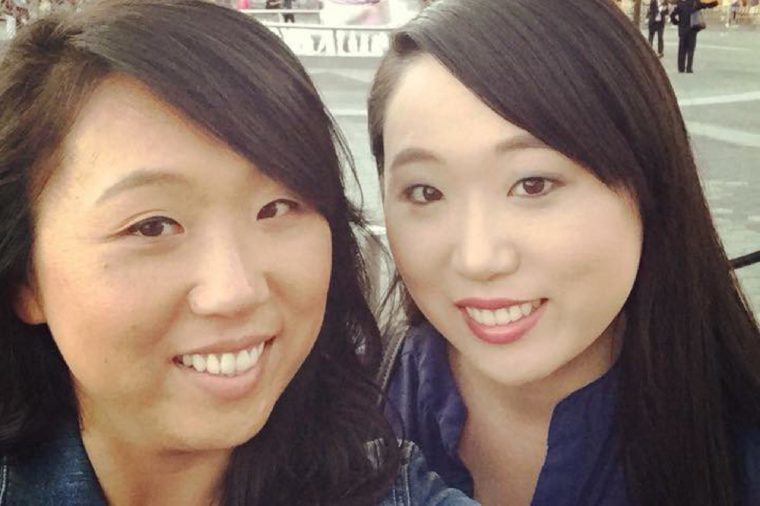 Social media isn’t the only technological innovation helping separated twins find one another—Amanda and Katey found each other at age 33 when they submitted DNA samples to the service 23andMe. They discovered that both of them are fast eaters, both failed algebra as students, and both always pull out three paper towels in public restrooms. “I now could never imagine not having her in my life as she is such an important part of it,” Katey says. Check out these heart-melting stories about adoption. 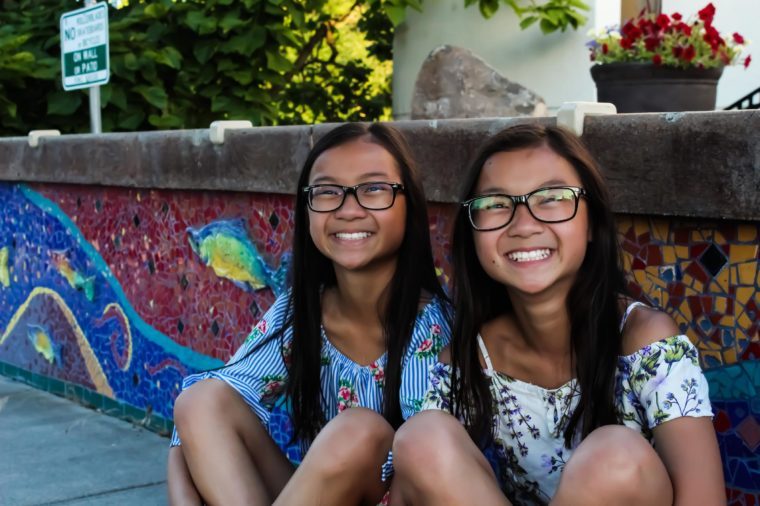 These twins didn’t have to wait until adulthood to be reunited. After being kept together in China until they were 14 months old, both girls were adopted by American families who didn’t know they were twins. When Audrey’s mother looked into her background, she discovered a photograph of her daughter with an identical baby girl sitting on the lap of their foster mother. She eventually connected with Gracie’s mother through Facebook. Their emotional reunion happened on Good Morning America, where the girls wore matching pink tops. 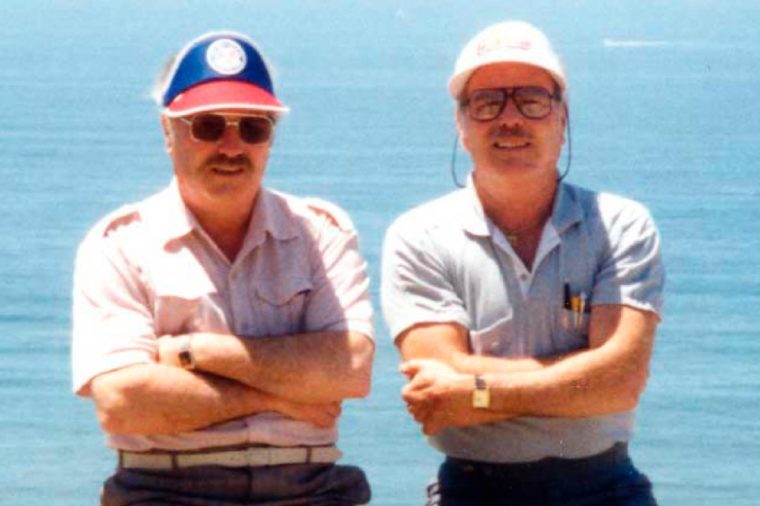 It’s not always adoption agencies that split up multiples as babies. After giving birth to identical twin boys in Port of Spain, Trinidad, in 1933, Jack and Oskar’s Catholic mother left their father and took only Oskar back to her home country of Germany, where he hid the fact that his father was Jewish and joined the Hitler Youth movement as the Nazis were rising to power. Jack, meanwhile, stayed in Trinidad as a child, and at 16 moved to Israel, where he served in the Israeli navy. The boys knew about one another, and when they were 21 Jack visited Oskar in Germany—according to the Los Angeles Times, they were surprised and disturbed to find that they had matching mustaches and were wearing almost identical sports jackets. Despite the fact that their childhoods had been spent in completely different environments, they also shared mannerisms (loud sneezes and nervous habits) and prickly temperaments, but they never got along especially well with one another. 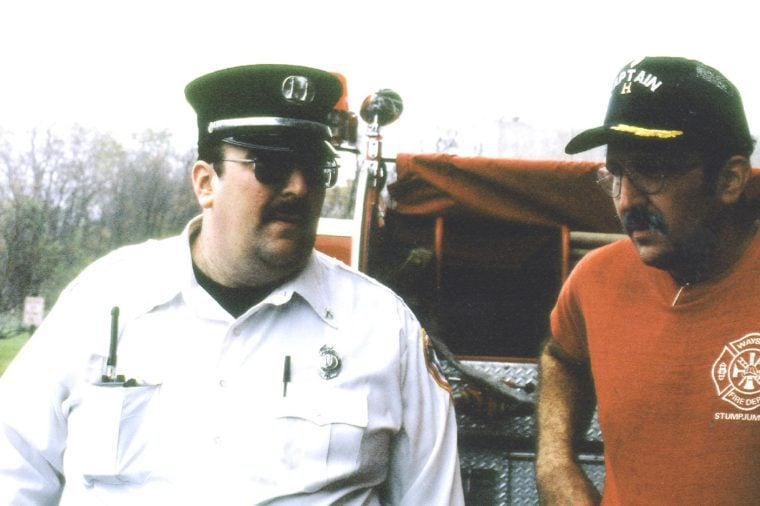 Other reunited twins separated at birth experience immediate affinities. Mark and Jerry, who were both firefighters when they met in 1985, found one another because Mark’s firehouse colleagues attended a convention where they spotted Jerry. Dr. Segal says they had the most surprising similarities she’s seen: “Both were volunteer firefighters, carried big key rings on their belts, which each had big buckles,” she says. “And both drank only Budweiser beer.” Check out the bizarre sibling stories you won’t believe are true. 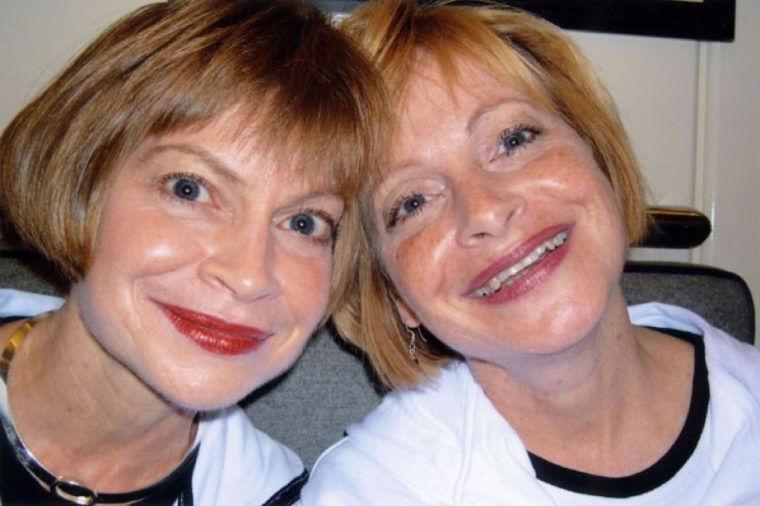 When Debbie was 45 years old, her mother told her for the first time that she’d been adopted and that she had a twin. Debbie hired a private investigator to find her sister, and when they met they found that both had very similar hairstyles and both enjoyed freaking people out by rolling their eyes upward so far that only the whites are exposed, according to Dr. Segal. Both were also devoutly religious—Debbie is Jewish and Sharon is Christian. Some of the most surprising similarities Dr. Segal sees in twins who have grown up separately are “values and attitudes, such as politics, social ideas, and religious interests,” she says. 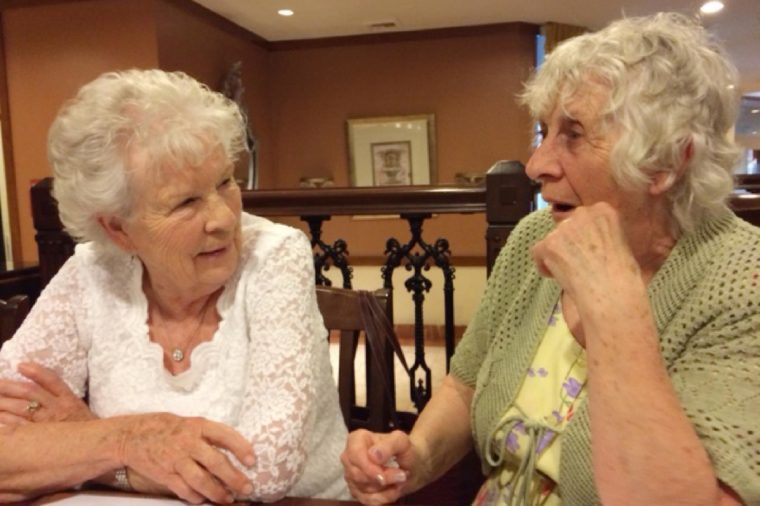 At age 78, they met for the first time since they’d been separated as babies. Their mother, Alice Lamb, was working as a live-in servant when the twins were born in 1936 in Aldershot, United Kingdom, and she planned to give up both girls for adoption. But Elizabeth had a curvature of the spine, she says, and her mother was told that she wouldn’t be adoptable, so Ann grew up in an adoptive family and never knew about her sister. Elizabeth grew up with their birth mother and was aware of her twin, but didn’t think there was any way to find her. Ann’s adult daughter, Samantha, spent years investigating her mother’s background, and learned about her sister in 2013; the women met in person the following year. Next, find out the ways to become BFFs with your adult siblings.