16 of the Most Unforgettable Images from the Westminster Dog Show

What do you get when you mix 2,360 dogs, their human entourages, and thousands of adoring fans? Some truly amazing pictures.

The Westminster Kennel Club Dog Show (WDS) is a time-honored tradition for dog lovers around the world. We cheer as we watch one dog after another strut their stuff in the famous show ring at Madison Square Garden, and we hope the judge will call out our favorite for Best in Show. (Spoiler alert: If it’s one of these 9 beloved dogs, it probably won’t win.) But there’s a lot more to the WDS than the prestigious show ring. This three-day event is ripe for capturing “oohs” and “ahhs,” as well as “what-the-what?” moments. Here are 15 of the most unforgettable images you’ll look at over and over.

With her several-inches-high pompadour, sleek shiny locks (or are those ears?), and ankle poofs, Siba won over the judges at the 2020 WDS. The standard poodle with a very  unforgettable cut one the prize–the first standard poodle to do so since 1991.

It’s actually the Komondor, a Hungarian herding dog with corded hair that resembles dreadlocks. The Komondor isn’t the only dog with this unique coat. The Puli, another Hungarian herding dog, sports a similar show-stopping hairdo. The Komondor doesn’t require brushing, and that’s a good thing, because how the heck would you do that? That said, it’s essential to separate the cords once they form to avoid painful matting. It’s a tedious task to maintain that corded glam, but on the plus side, grooming is a built-in opportunity for bonding with your dog. The Komondor is known for being affectionate, gentle—and patient. Speaking of grooming, this is how often you should wash your dog.

Call it a night

Waz’n Me, a bulldog, was out like a light after competing in the 2005 WDS. Dog shows are a process of elimination, and Westminster spans three days. The 2020 show will open with 2,360 dogs, and on the final night, it will be down to just seven dogs competing for Best in Show. Here’s how it goes: After the Best of Breed competition, the winners advance to the Group competition. There are seven Groups: Toy, Terrier, Sporting, Non-Sporting, Working, Hound, and Herding. Four placements are awarded in each group, and only the group winner moves on to Best in Show. The final show ring features seven dogs, one from each group vying for the top prize. Whew. It’s no wonder this hunk of chunk was all tuckered out after showing. Here’s what your dog’s sleeping position might be telling you. 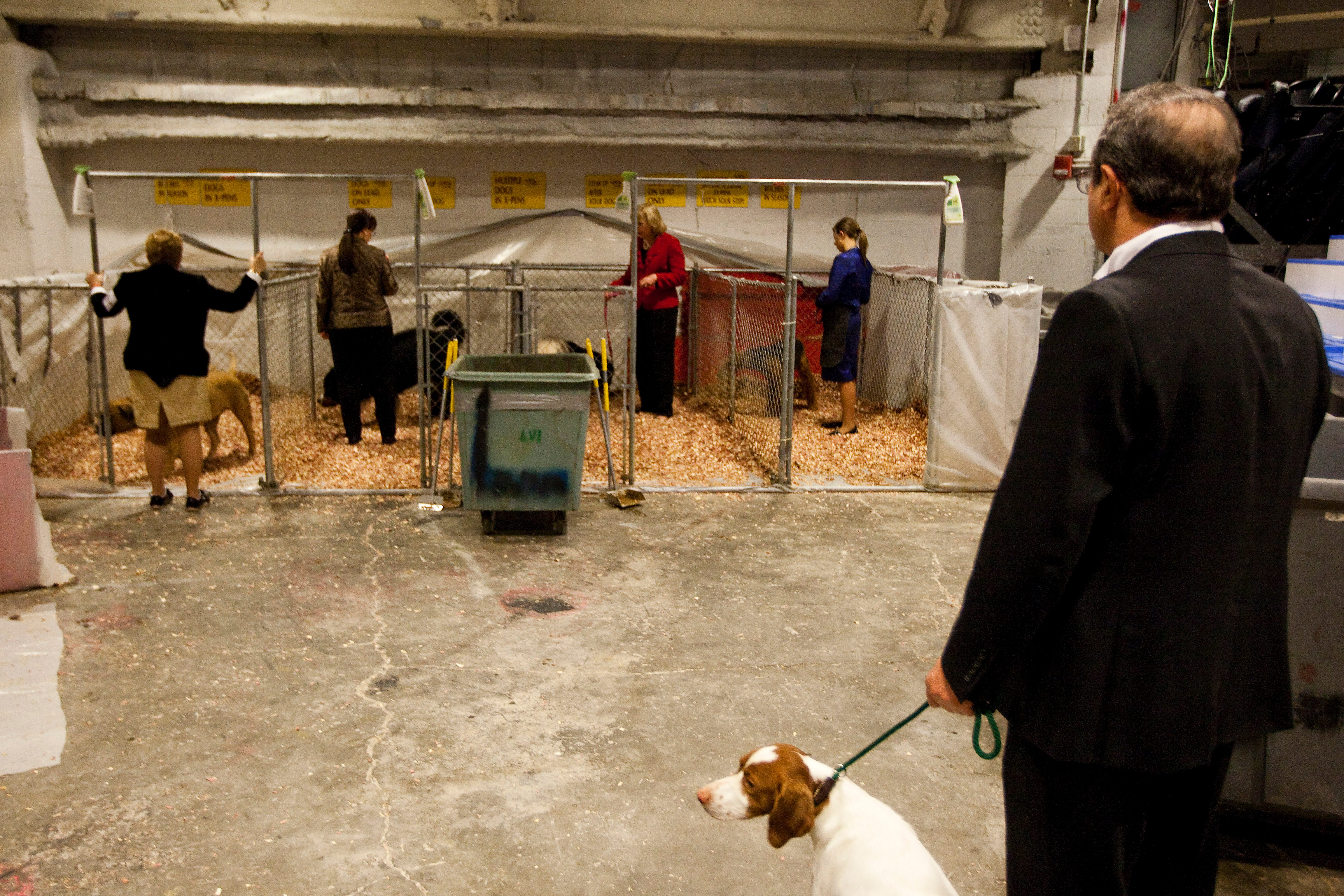 There’s no walking around the block to find the perfect tree or fire hydrant to do your business. The WDS is a benched show, which means all dogs and breeders/handlers must be available to meet and greet with the public from their assigned “bench.” All dogs are required to stay on their designated bench or in their bench area the entire time of the dog show, with three exceptions—when they are showing, being groomed, or going potty. Some dogs have a shy bladder and hold it for hours. Here are some other fascinating backstage secrets from another benched show, the National Dog Show.

“Hey, Mr. Beagle, you just won first place in the Junior Showmanship category. What are you going to do next?” Disney World (or, more likely, a hot dog stand) would have to wait because this adorable pup at the 2017 WDS wasn’t going to let the call of nature take him out the ring. He popped a squat and did his business on the famed green carpet. Better to feel relieved than bloated before accepting a trophy! It probably didn’t take too long to scoop up the Beagle’s business, but for a Great Dane, it might take a “hazmat team,” as John Hurley joked when sharing his most memorable moments as a host for the National Dog Show.

Not much room to roll over

Most dog shows are unbenched, so the dogs that are competing only have to be present for judging. When they’re not in the ring, dogs can leave or hang around the event area. As we already mentioned, Westminster is one of the few benched dog shows in the nation, but what does “bench” mean? The size of the bench area varies by breed, and bigger dogs are assigned bigger areas than smaller dogs. Still, the square footage is akin to “tiny house” living: A bench for the dog to sit on for the “meet and greet,” a crate, and a tote for grooming essentials and food are all packed into a small space. It’s no wonder the dogs look so happy when they hit the green carpet in the show ring—they can finally run! Here are another 13 fascinating facts about Westminster.

A German Shorthaired Pointer looks on as its owner scrolls through her phone in the grooming area at the 2016 WDS. The WDS lasts for three days and features a variety of events, including junior showmanship, dog obedience, and agility championships. But despite how much always seems to be going on, there’s still a whole lot of “hurry up and wait”—with an emphasis on the wait. Breed judging begins at 8:30 a.m., and if you win in your breed, you advance to the group judging, which doesn’t start until 7:30 p.m. By the way, another German Shorthaired Pointer named CJ won Best in Show that year.

Apparently, someone didn’t tell Stump the Sussex Spaniel that the Best in Show trophy doesn’t come with treats. Believe it or not, it doesn’t come with money either. Best in Show winners take home a trophy, a crystal bowl, and a commemorative picture frame. While that stuff’s obviously for the humans, the canine victors also get a celebratory lunch at New York City’s famous Sardi’s restaurant. We hope that Stump’s included dessert, too, because he had two things to celebrate: In addition to winning Best in Show in 2009, he became the oldest dog to earn that title at 10 years, 2 months, and 9 days of age, proving that you can teach an old dog some new tricks. Here are 14 reasons you should consider adopting an older dog.

Uh-oh, I hope she doesn’t see my waxy buildup

The dogs that show at Westminster didn’t qualify based on their good looks and obedience skills. Dog shows are actually conformation shows whose sole purpose is to evaluate breeding stock. Judges are looking for the dogs that embody all the bells and whistles of the breed standard. Take the Black and Tan Coonhound pictured here at the 2006 WDS. His ear span is 26 inches. According to the breed standard for a Black and Tan Coonhound, the ears must “extend naturally well beyond the tip of the nose and are set at eye level or lower. Penalize ears that do not reach the tip of the nose and are set too high on the head.” They probably should be clean, too. This is how often you should be cleaning your dog’s ears—and how to do it safely.

Just gonna shut my eyes for a couple of minutes…

Things haven’t changed much since the first Westminster Dog Show in 1877. The itinerary is grueling, with days often beginning before the sun rises above Madison Square Garden and ending at midnight. This picture, taken at the big show in 1957, perfectly sums up just how exhausting it can all be. Of course, it’s also a whole lot of fun. A benched show is basically a tailgate party sans the beer and wings. It’s a great opportunity for dog lovers to meet and greet the dogs, handlers, and breeders, and to learn about (and swoon over) their favorite breeds. With so many adorable dogs, it’s a daunting—if not impossible thing to choose a favorite.

Talk about showmanship! This Yorkshire Terrier seems to be rising above the competition. In reality, the handler is preparing to lift this silky sweetie ever so carefully (mind the hair!) to the judging table in the show ring at the 2012 WDS. By the way, the reason some dogs are evaluated on a table or ramp is because of their height and weight. Don’t miss these photos of adorable dogs and their quirky owners at the Westminster Dog Show.

I compete for treats

I’ll be the bestest Bulldog in the show ring if I can have another treat! Easy access to tasty bait (or treats, as ordinary folk say) helps the dog stay motivated and keep its attention on the handler or judge. Handlers keep a piece of bait in their pocket, blouse, armband, or even their mouth for easy access. Of course, they never use these 12 common foods that can be toxic for dogs.

Be a dear and fetch me a drink

The Westminster Dog Show takes place in February, but it feels like July inside Madison Square Garden. It gets toasty in the show ring with all the lights needed for broadcasting. Plus, there’s the run around the ring when the dog is announced—and if you’re lucky, the judge will call you out to run down and back to narrow down the top dogs. This handsome Dogue de Bordeaux got a drink from a water bottle to quench its thirst without making a mess during the 2017 WDS. Handlers use wet towels and cooling blankets on the dogs while they wait out the evaluation of the group. Make sure you know the heatstroke warnings to look for in your own dog.

Check out the body language on this tiny Miniature Pinscher as he’s greeted by four Great Danes during the 1937 WDS. The imposing size of this fab four stops the Mini Pin in its tracks, but in reality, he has nothing to be scared of. Despite their intimating physique—upwards of 32 inches at the shoulder and weighing in at 175 pounds, Great Danes are gentle giants, noted for being affectionate and patient. On the flip side, these are 13 of the sweetest tiny dog breeds.

Wake me up when you’re ready to do my hair

Dogs aren’t the only ones with a glam squad at the WDS. Handlers also want to look their best for the show ring, but not so good that they take the judge’s attention away from the dog. Here, a groomer has two clients—the handler and a Sheepdog named Zack, who seems content to snooze while he waits for his turn. John Hurley, a host for the National Dog Show, recalls some funny and memorable moments, including the time when one judge wore a really distracting outfit! 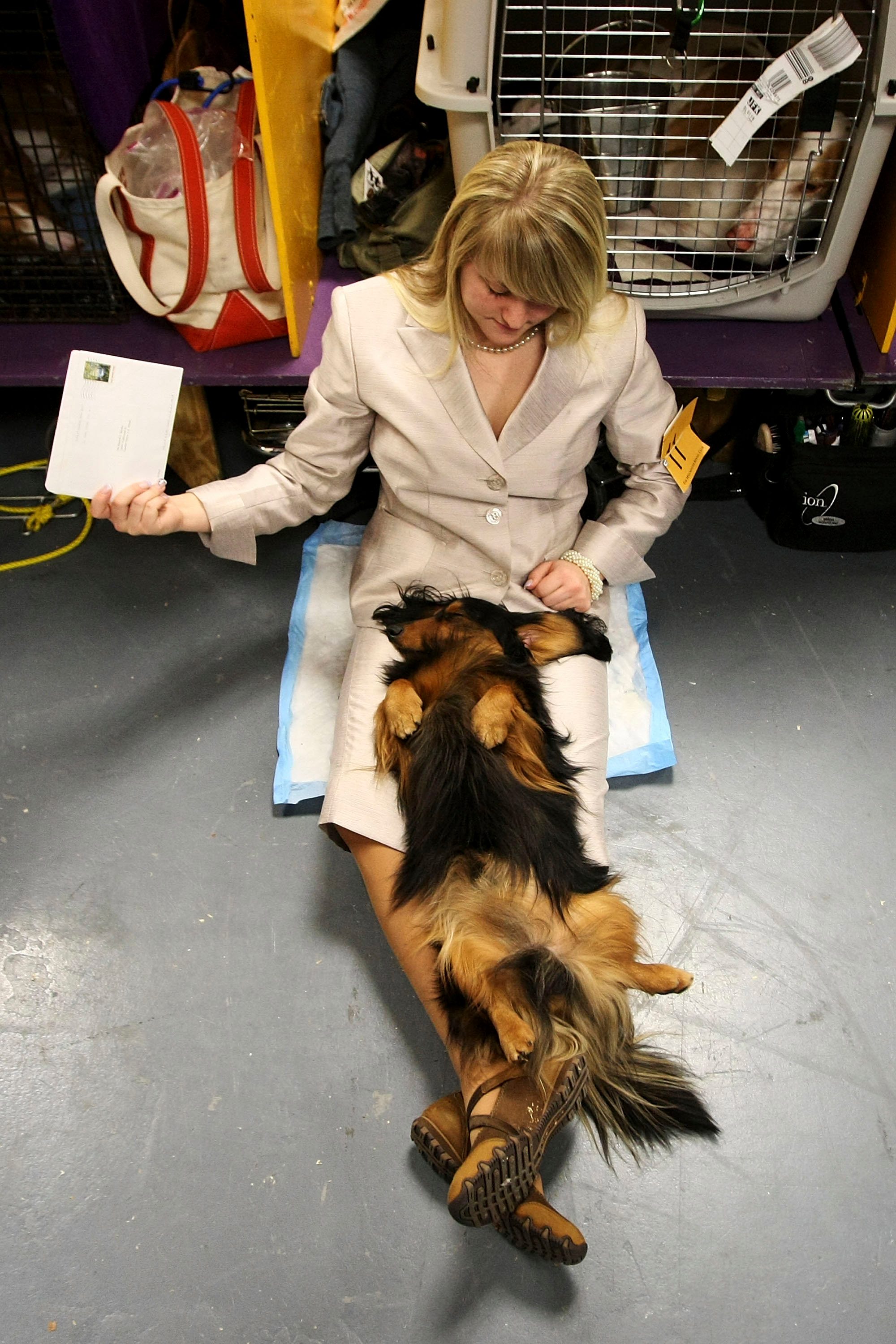 I can sleep anywhere

Competitions can be exhausting! Here, a handler watches over her Longhaired Dachshund as it takes a well-deserved nap during the 2008 WDS. Doxies are set to dominate the 2020 WDS with a whopping 55 entries. The high number is due to the different varieties of the Dachshund, as this is a variety breed and each variety shows in its own group. This year, there will be 23 smooth-coat, 16 wirehaired, and 16 longhaired Doxies. If you think calling a Dachshund a wiener dog is amusing, you’ll get a kick out of these 13 funniest registered names of Westminster show dogs.