Some neck gaiters can be safe and effective face coverings for coronavirus protection if worn correctly. Here are some of the highest rated on Amazon. 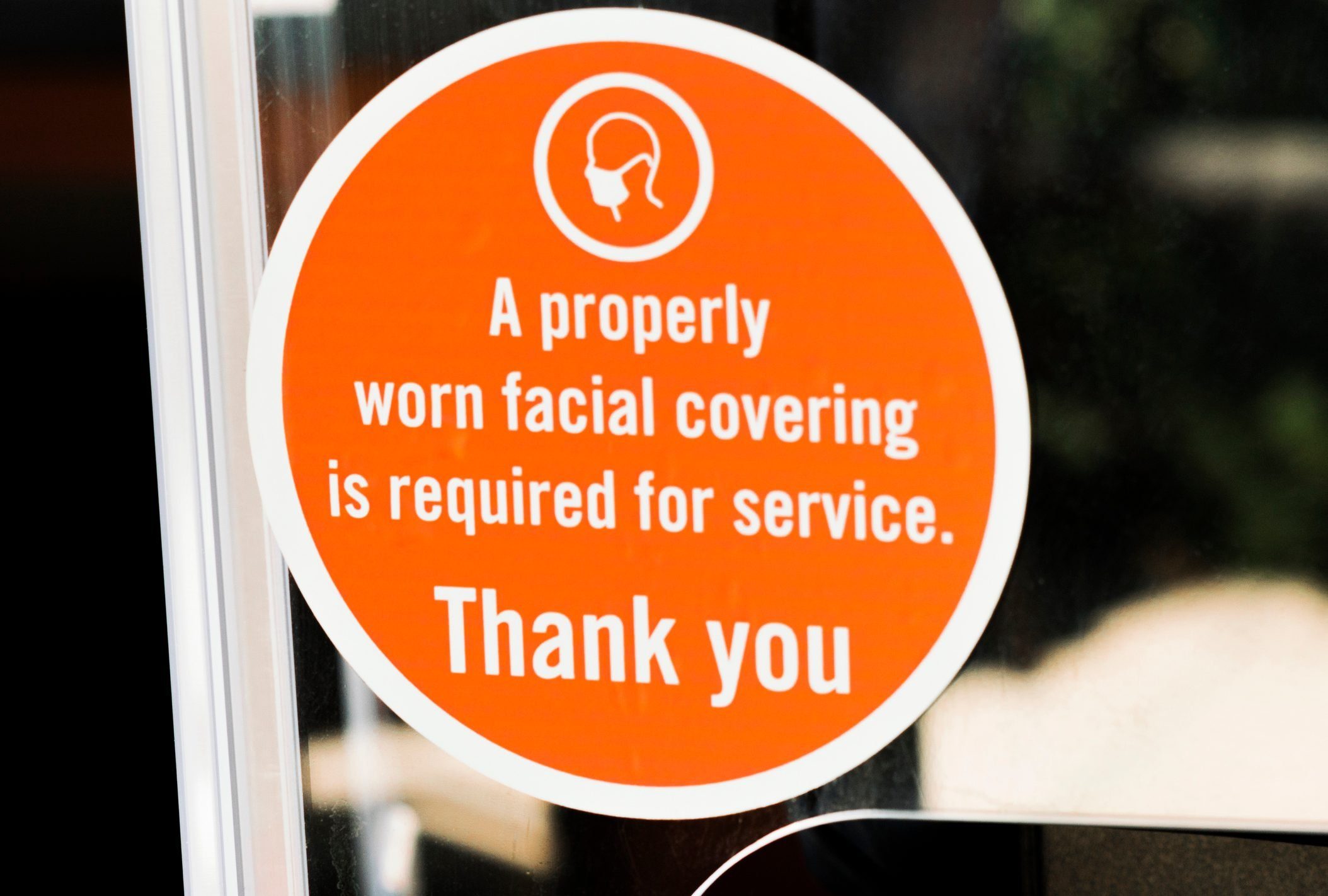 The current recommendation for face coverings

Although a lot of progress has been made during the short time the world has been coping with the novel coronavirus, the COVID-19 pandemic is far from over. The good news is there are things you can do in your day-to-day life that can help curb the spread of coronavirus. This includes wearing face coverings as recommended by the Centers for Disease Control and Prevention (CDC) and World Health Organization (WHO).

Currently, the recommendation is for face coverings to be worn in public and whenever social distancing isn’t possible. Although the gold standard for face coverings is the N95 respirator, which filters at least 95 percent of small airborne particles including disease-causing viruses and bacteria, respirators are generally not considered necessary in non-medical settings.

Rather, the WHO’s guidance describes the ideal face covering as one consisting of three layers of fabric, including a layer, such as an activated charcoal or polypropylene filter, that traps particles. These are the places you’re most likely to catch coronavirus. 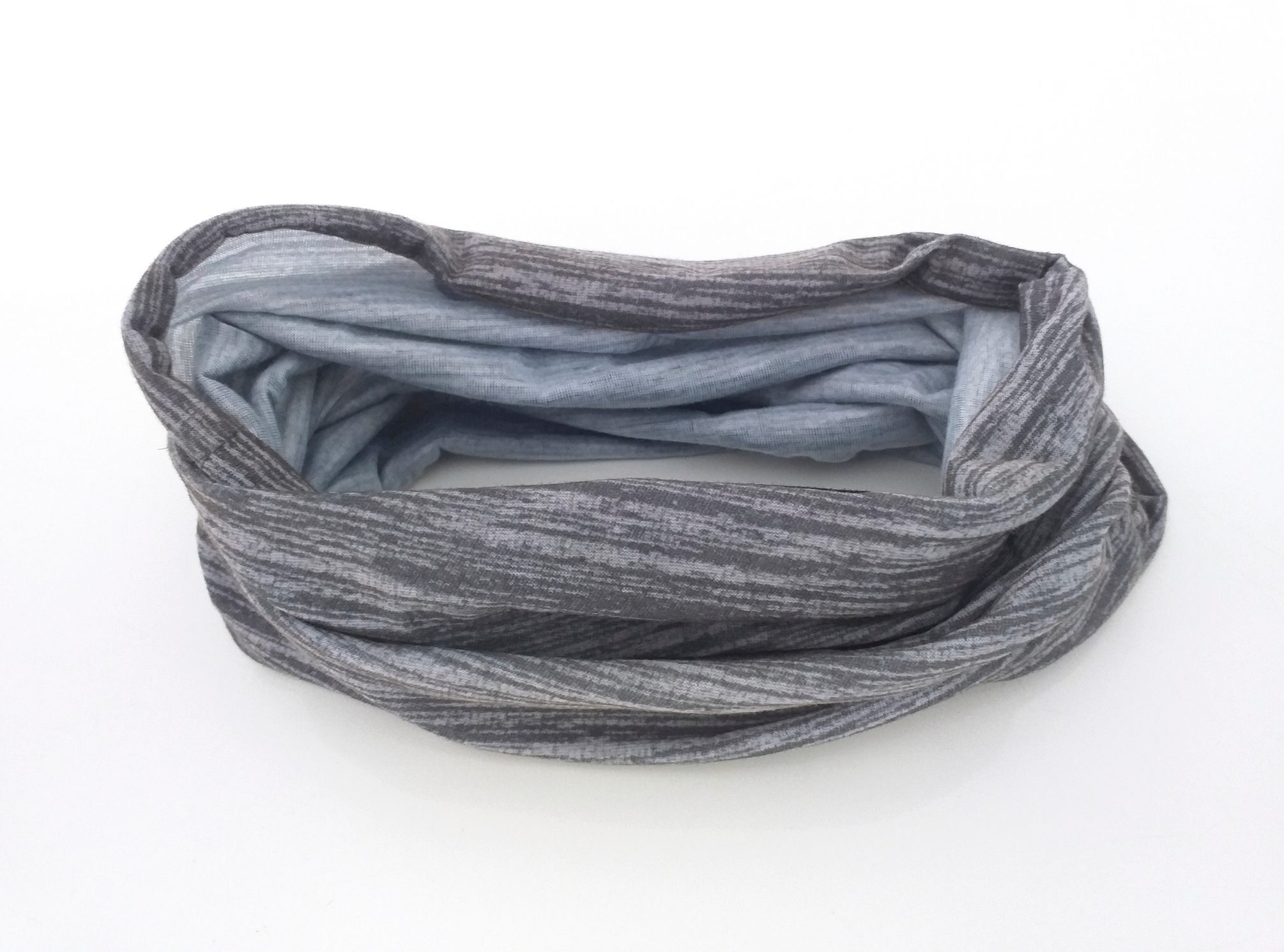 Not everyone is happy about the face mask recommendation, however. For some, wearing a mask is so uncomfortable, whether physically or emotionally, they either won’t or can’t wear one. Some of those individuals may turn to neck gaiters as an alternative. A neck gaiter is a sleeve-shaped garment, like a turtleneck, except long enough to be worn over the mouth and nose. Until now, the consensus among scientists has been that any face covering is better than none, which is supported by ongoing research being conducted at Northeastern University by  Loretta Fernandez, PhD, associate professor of civil and environmental engineering, and her colleague, Amy Mueller. Winter is right around the corner. Here are the best face masks for cold weather. 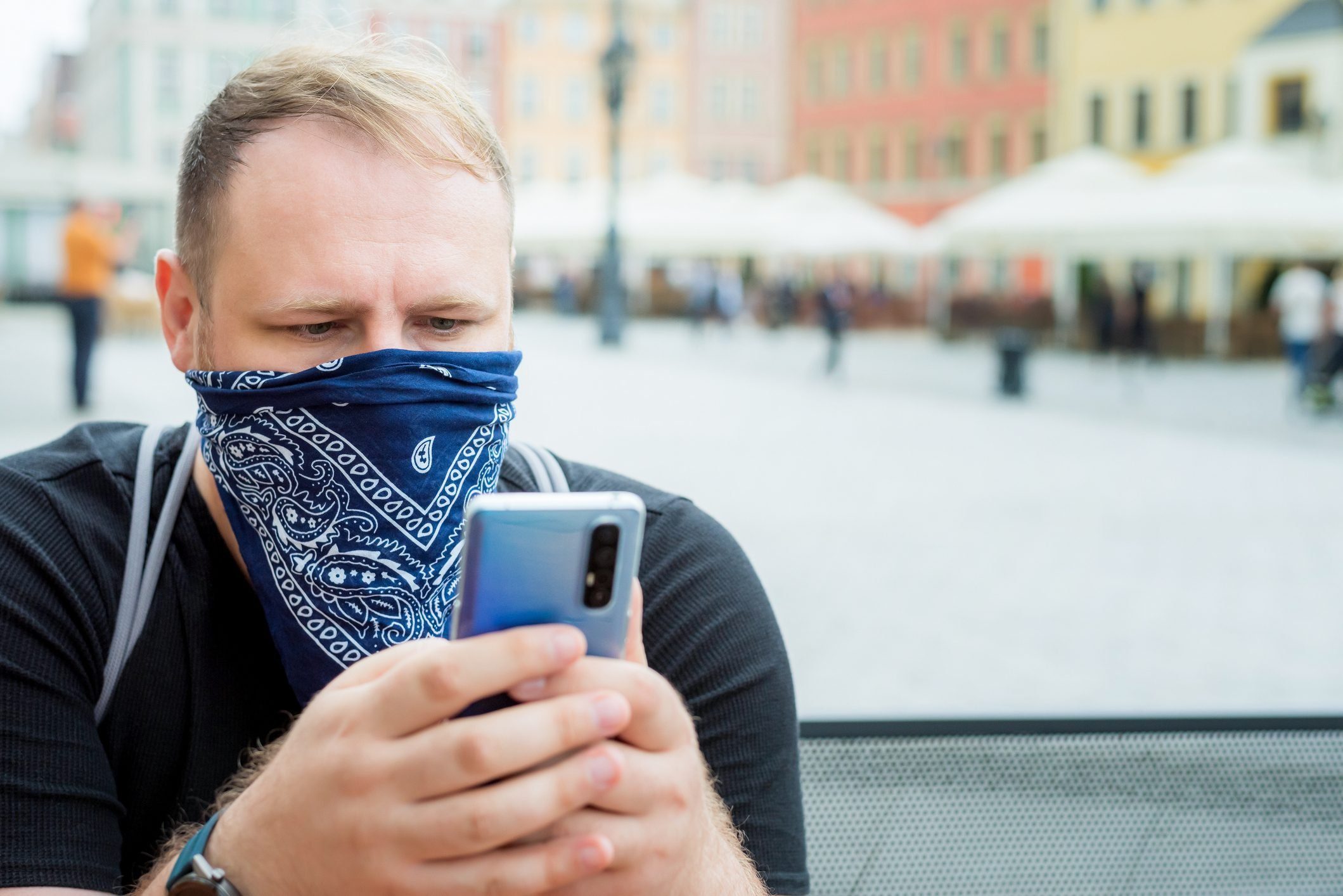 What the science says about different face coverings

However, a new study has led to questions about whether wearing a neck gaiter (also known as a “neck fleece” or a “buff”) might actually be worse than wearing no face covering at all. In the study, published in August in Science Advances, neck gaiters were evaluated (among other face coverings, like surgical and cotton) and found to break larger respiratory droplets into smaller ones.

Why is that bad? In theory, those smaller droplets could stay airborne longer, giving them more time to infect someone else. However, the study co-authors clarified that they examined only one particular neck gaiter (and not other types of neck gaiters) worn by one person and that its poor performance “is most likely due to the material it was made of (a single thin layer of a synthetic weave), and not the fact that it was constructed as a neck gaiter.”

So don’t give up on gaiters as a form of protection just yet.

Neck gaiters made of other materials, such as two layers of cotton, with or without a filter, might be more effective, points out study co-author and scientist at Duke University, Isaac Henrion—provided it covers your nose and chin.

“Further research is needed,” he adds because the study was not even intended to draw final conclusions about face masks. Rather, the study was intended as “proof of concept of the experimental method” (i.e., the purpose of the study was to create a workable design for a future study, rather than to draw conclusions about face masks). In other words, as far as the study authors are concerned, there is no conclusion to be drawn about neck gaiters at all at this time. If it’s still warm where you live, here are some helpful tips for wearing a face mask in hot weather. 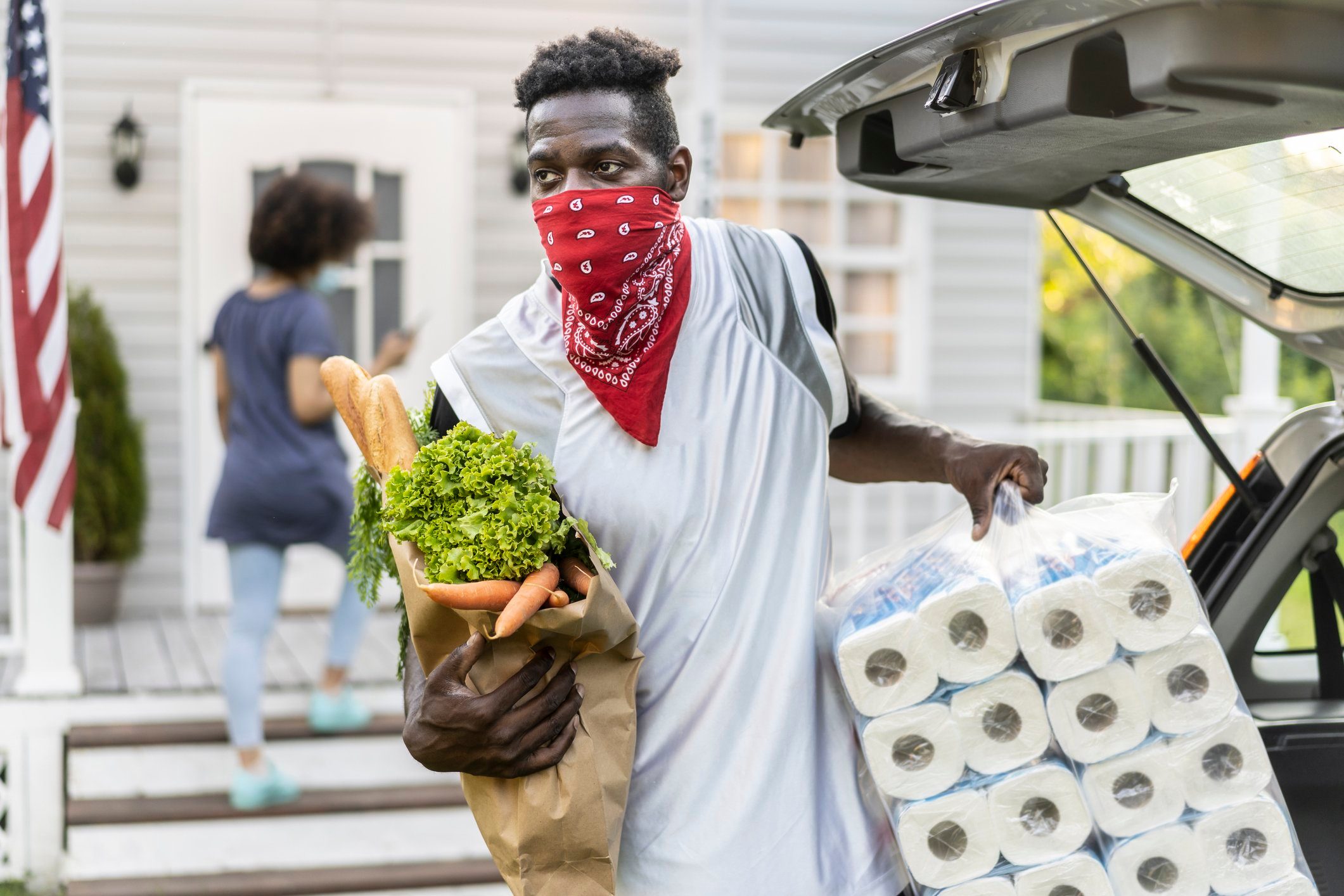 Neck gaiters can be effective

“For purposes of protecting others from the virus being spread by the wearer, neck gaiters should be doing as well as any other face covering,” according to Fernandez, assuming they are made from a material that does not disperse respiratory droplets into smaller particles.

While she and Mueller have not specifically tested commercially-available neck gaiters, they’ve been testing homemade face coverings in the form of a sleeve worn from neck to nose. Not only have they proven effective at protecting those with whom the wearer comes into contact, but they have also been proven effective for protecting the wearer (up to 90 percent particulate removal).

In addition, Fernandez points out that neck gaiters can be worn over other masks to add another layer of fibers. This means virus droplets would have to make their way through these layers before reaching the open air. It also helps enhance the seal of the underlying mask, meaning extra protection.

If wearing a neck gaiter seems like a more appealing or comfortable option for you, then the advantage is you’re more likely to reliably wear it. The challenge with neck gaiters is making sure they are thick enough (multi-layered would be ideal), are made of a fabric with a complicated fiber structure (such as cotton), and fit well. Follow these steps to make a DIY face mask. 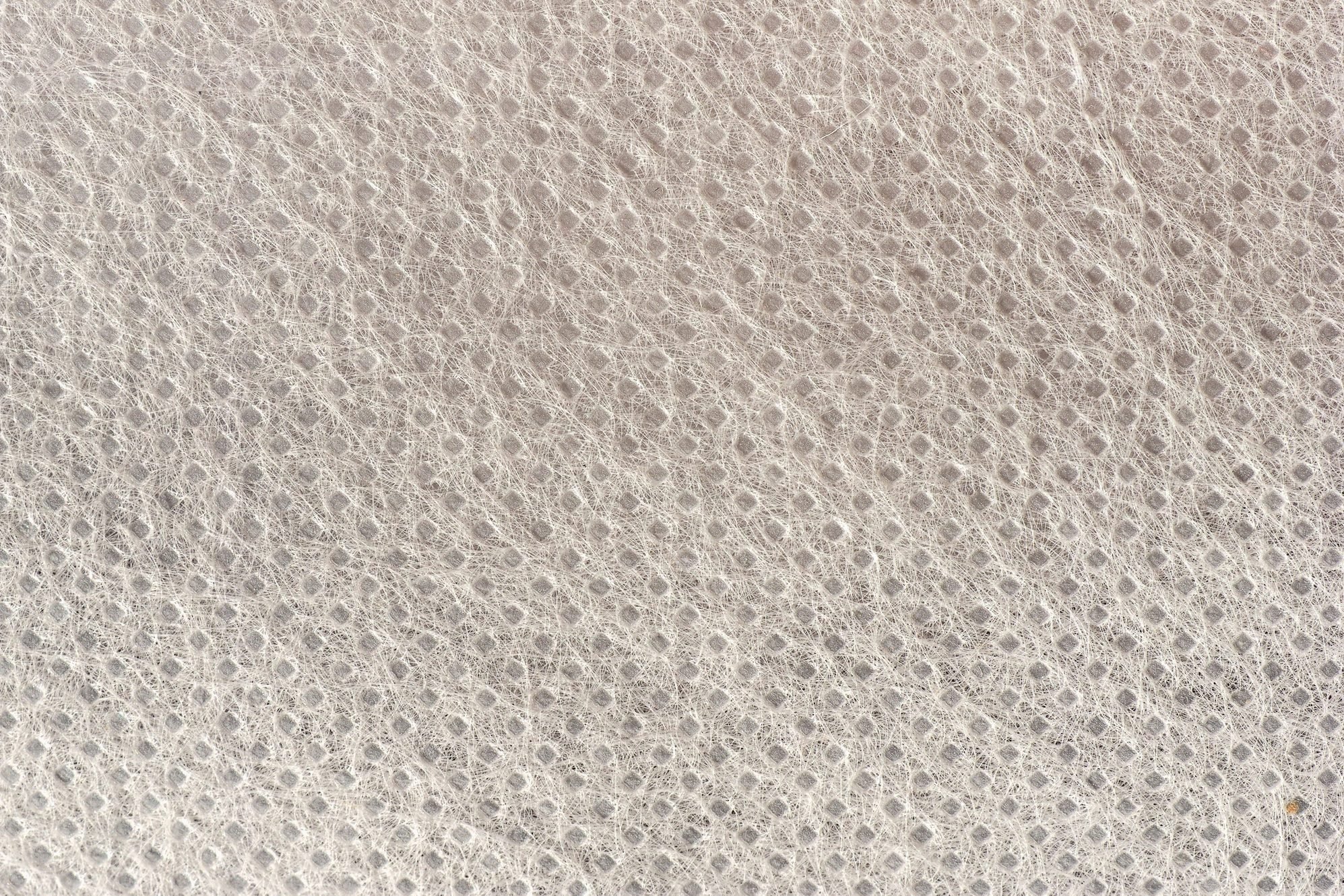 Does adding a filter make a neck gaiter more effective?

Whether a filter can help make a neck gaiter better at protecting against COVID-19 depends on what the filter is made of, according to Henrion.

“A polypropylene filter will make the mask more effective. But even without a filter, two-layers of cotton are really good at stopping the vast majority of particles—just make sure to use a tightly woven material with a high thread count.” Noting also that filters are not practical for everyone because replacing them can get expensive quickly, he reiterates that what matters most is wearing a well-fitting cloth mask that covers your nose and chin.

In sum, the evidence suggests that neck gaiters that were not manufactured for the purpose of protecting against coronavirus are not ideal. However, that’s not because they are neck gaiters, but because of what they are made of and how they are made. Still, they’re generally better than no mask at all.

Neck gaiters that are manufactured with official mask guidelines in mind can be as effective as masks manufactured with those same guidelines. In other words, it is necessary to look at each particular neck gaiter to decide if it affords the protection you’re looking for.

Need help deciding what neck gaiter to buy for coronavirus protection? We used our experts’ tips and narrowed down the highest rated neck gaiters available on Amazon. Check out these face masks with a sense of humor. 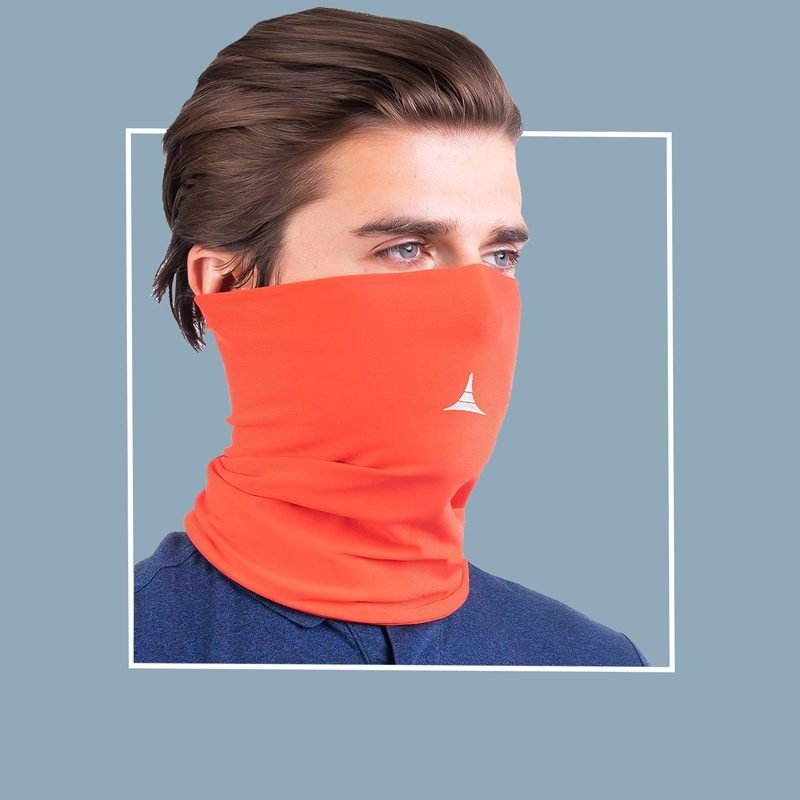 This classically sporty-looking polyester neck gaiter boasts a removable and washable filter that is certified ISO 16890, which is the particle-filtration standard that applies to ventilation system filters. It has been found, in a preliminary way, that home air filters, like furnace filters, might be more than 80 percent effective in filtering particles. (Yang Wang, an assistant professor at Missouri University of Science & Technology, tweeted about the research but it has not yet been submitted for official peer review.) 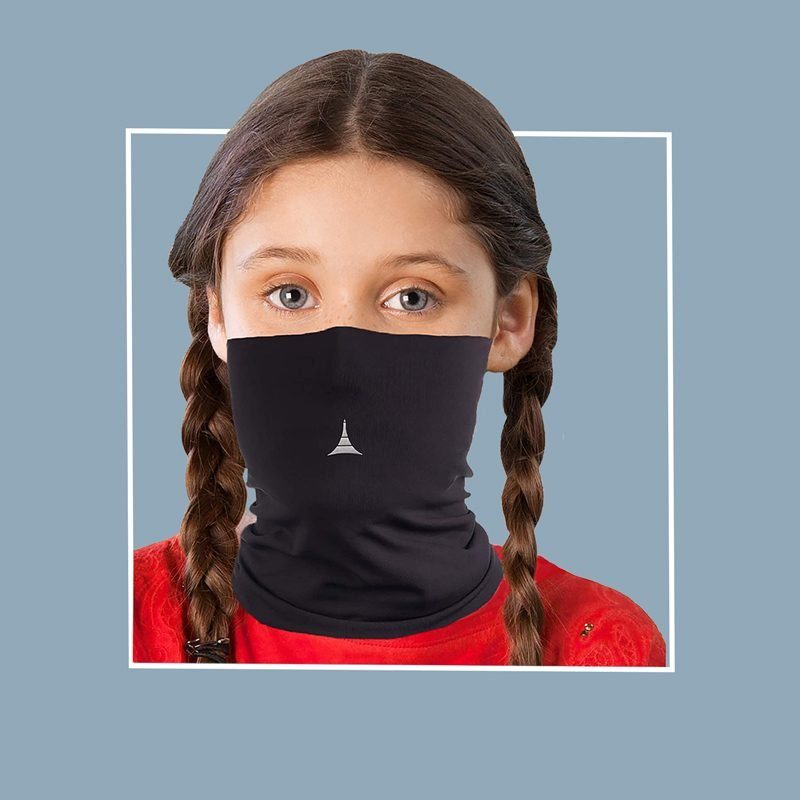 This filtered neck gaiter offers everything the French Fitness Revolution gaiter discussed above offers, but in a smaller size, more suitable for children. In particular, this one is sized for children ages 7 to 9. These eye-opening facts will convince you to wear a face mask. 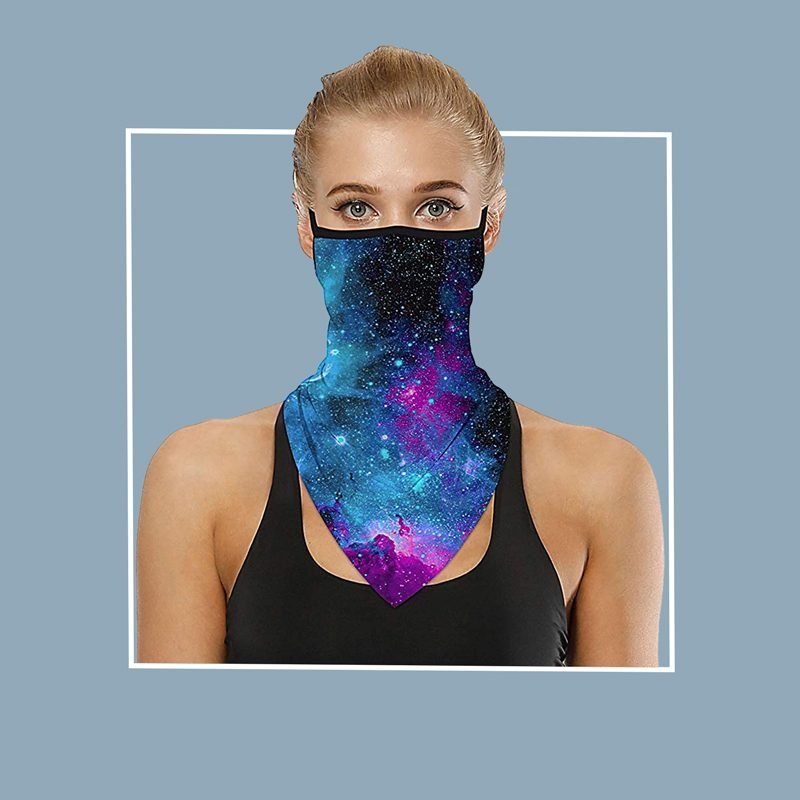 Designed with stretchy ear loops like the kind you’ll find in masks, this polyester microfiber neck gaiter comes with 10 filters that slip into a pocket within the gaiter. The filters that come with this gaiter are made from activated charcoal. It’s important to note that the filter alone is not going to offer you, as the wearer, the same level of protection as an N95 mask. Learn what the N95 stands for in N95 masks. 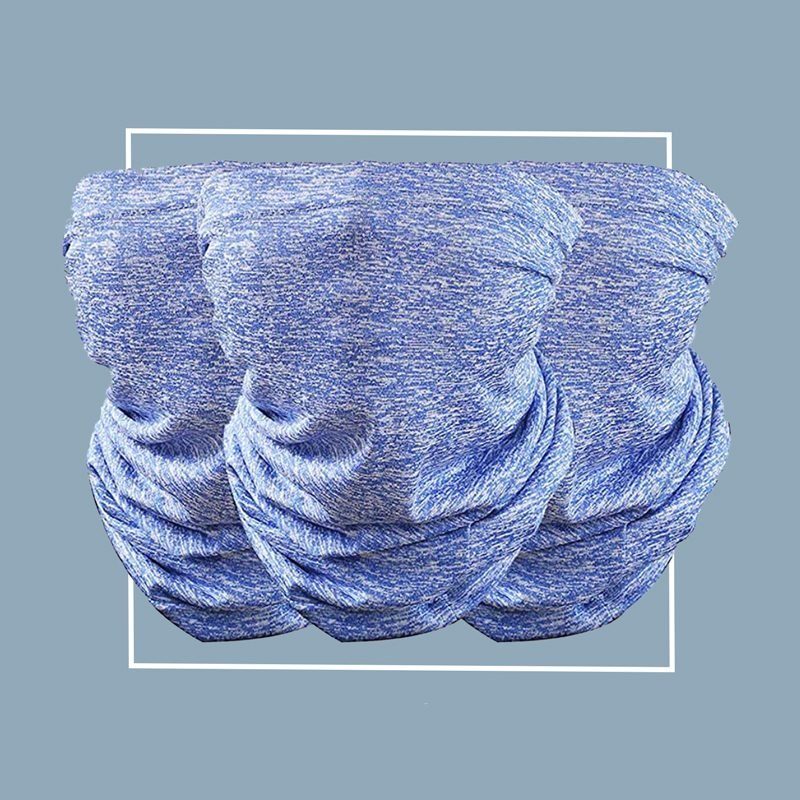 This face mask is available in at least 15 different colors and styles with a supply of 12 carbon filters and a pocket for the filters to tuck into. The main caveat with this one is that some of the reviews indicate the sleeve opening is very wide. This means this would be more appropriate for larger-sized individuals. Find out which is better: face shield vs. face mask. 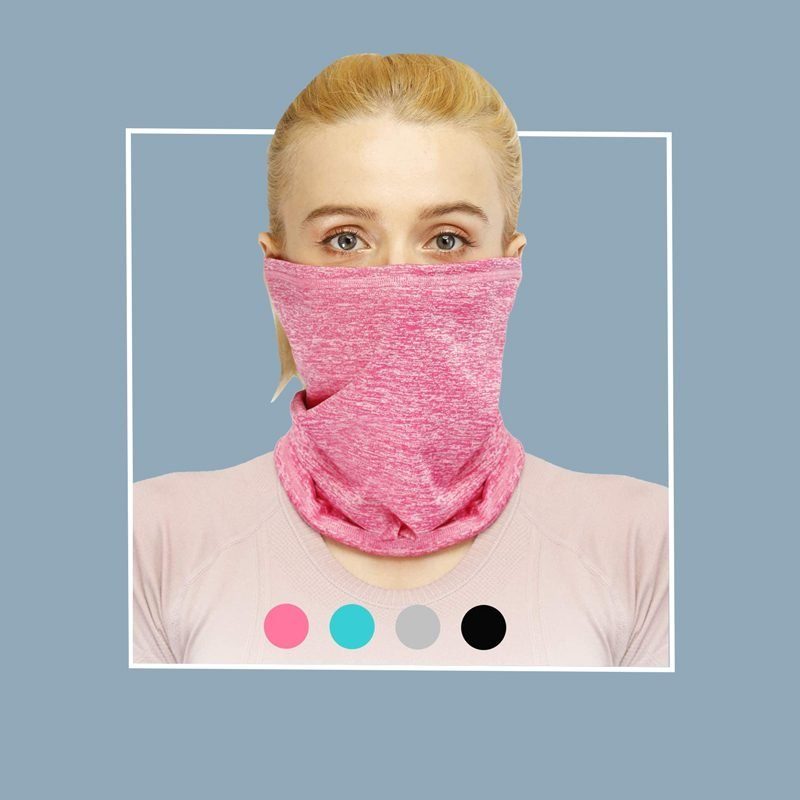 If the Kingyao isn’t for you because of the size, you’re in luck with the SXB filtered neck gaiter, which comes in a large and small size. It’s made of polyester microfiber. Plus, it comes with 15 carbon filters and a pocket to tuck them into. These are the etiquette rules you should follow when wearing a mask. 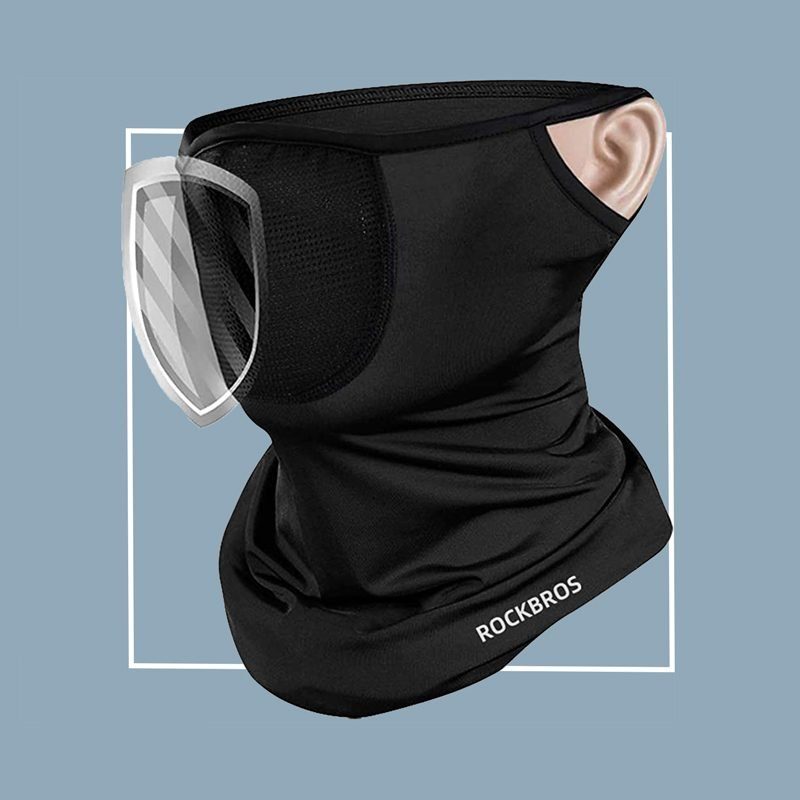 This neck gaiter looks like it’s designed with sports performance in mind, and the polyester fabric has moisture-wicking capabilities. The ear loops and vaguely cone-shaped construction are reminiscent of face masks. 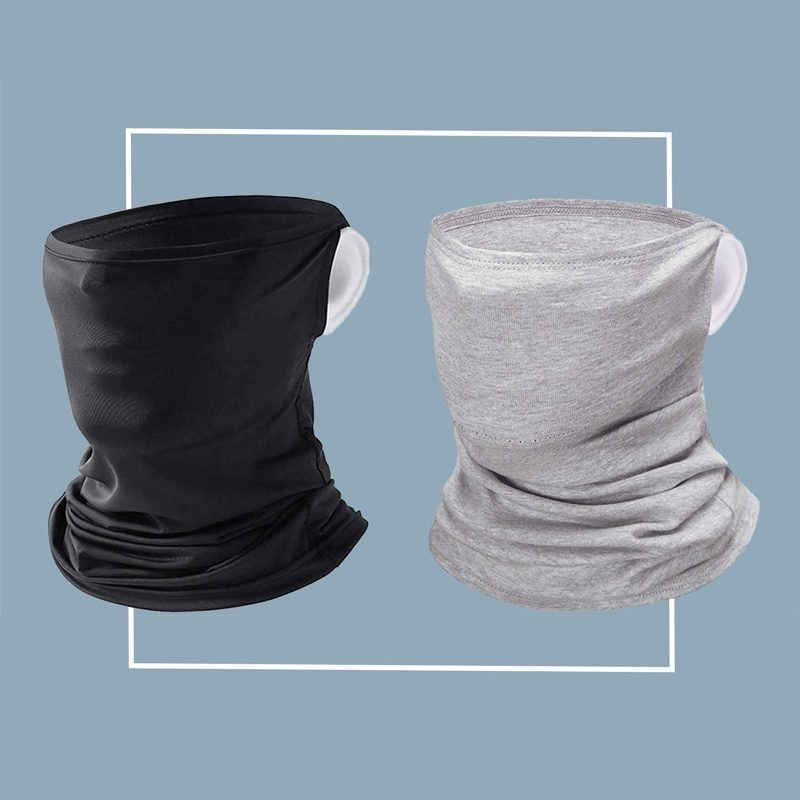 The Happiere is a bit like the Yarrashop, except the fabric is 95 percent cotton, the filter is a five-layer carbon filter, and instead of ear loops, it has more of an ear slot, which is to say it seems to cover up more of the ear, but it still offers the custom-stretch fit we’ve come to expect of face masks. Overall, it appears to be a better deal, economically speaking, since it comes with 10 filters. Here are some stylish face masks you can buy for work. 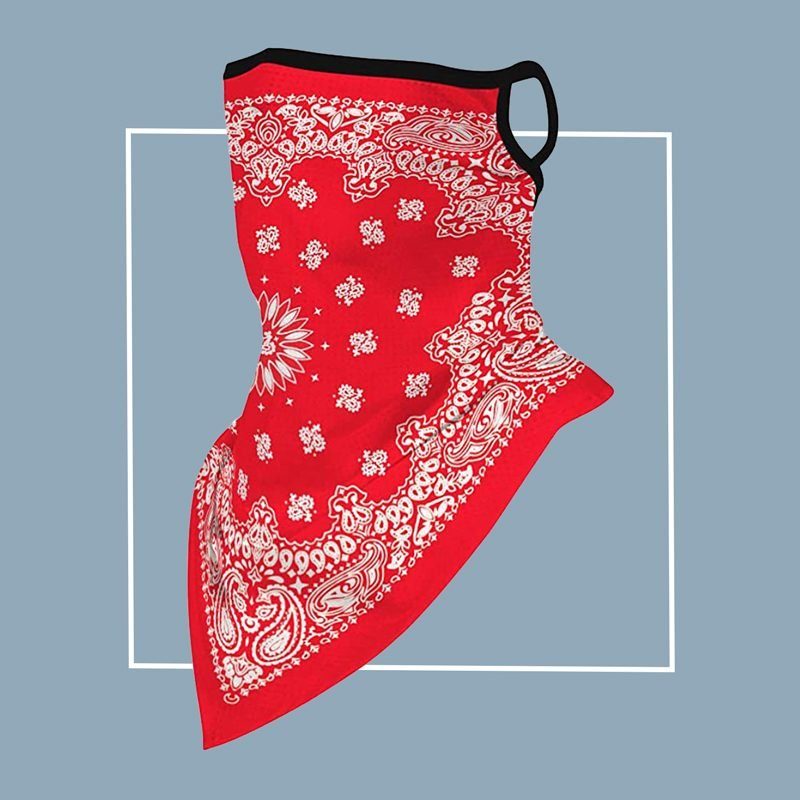 The Elosele is made of 100 percent microfiber, which means it is densely packed with fibers (approximately 200,000 fibers per inch). It also comes with built-in ear loops, which like the ear loops on a typical mask, help create a “custom” fit. It can also serve as a comfortable layer on top of another mask, for those seeking the enhanced protection discussed by Fernandez. 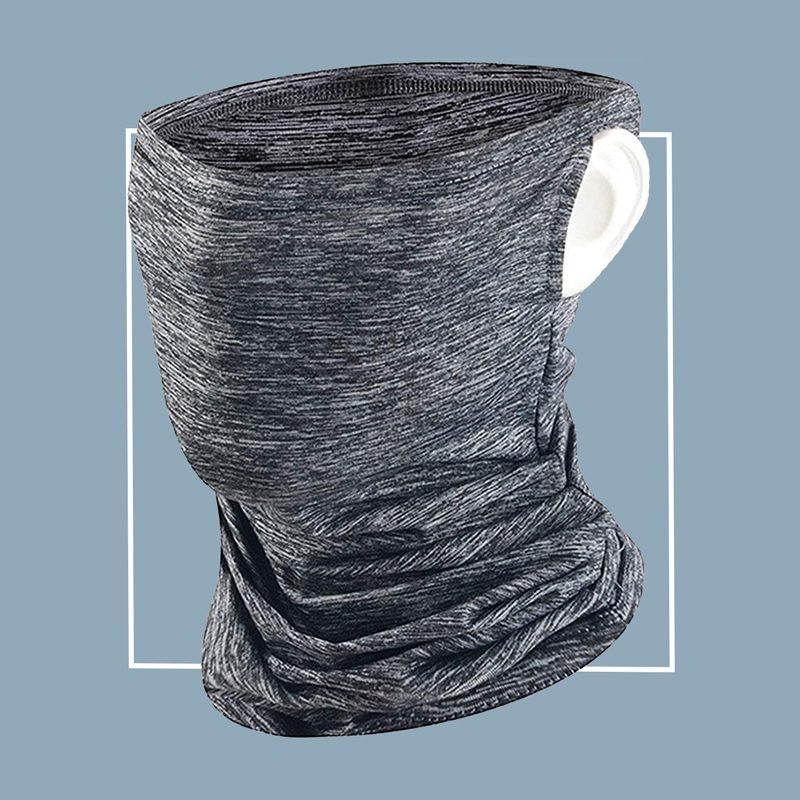 This neck gaiter is made of stretchy silk, which is known as a good material for filtering droplets. It also has ear holes, for a more mask-like fit. And it comes in a variety of patterns, including tie-dye, American flag, spilled paint, and different versions of camo, to match whatever you’re wearing or whatever mood you’re in. Since it’s lightweight, you can also use it as Fernandez suggests, to add another protective layer and tighter seal over a face mask. These are the best face masks for summer. 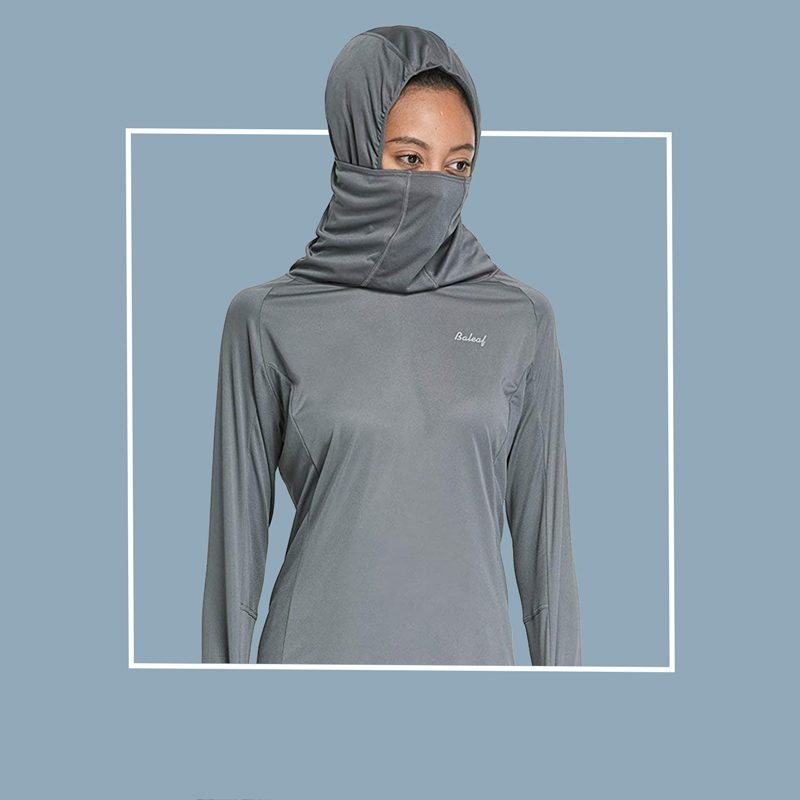 Talk about multi-purpose. Here’s a neck gaiter that’s also a hoodie. Or is it a hoodie that’s also a neck gaiter? In either case, you’re getting quite the bang for the buck with this clever combination made of dry-fit fabric that’s perfect for outdoor workouts and cold weather in general. But that’s not even the best part, which is that the face-covering portion is made from a combination of 60 percent polyester and 40 percent polypropylene, which makes it an outstanding outer layer to wear with a disposable face mask. Take a look at these photos that show how face masks are part of the new normal.