13 Things That Must Happen When a President Dies

From which person takes the oath of office to the exact speed of the funeral procession, these are the traditions that are followed when a sitting or former U.S. president dies. 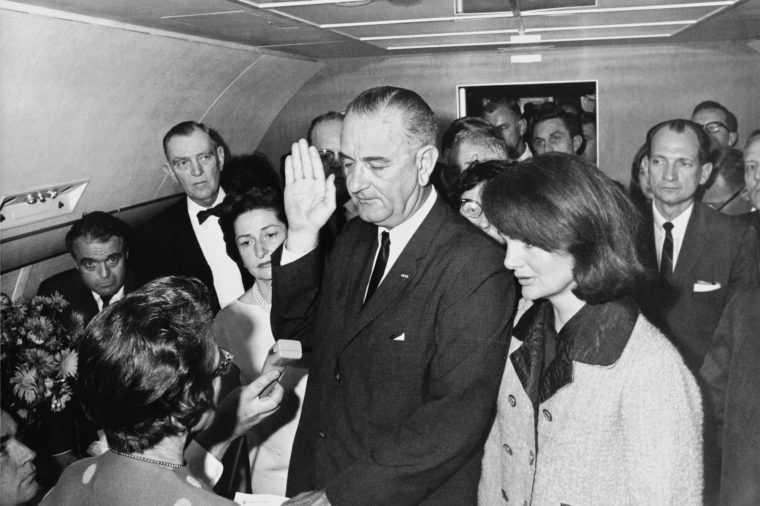 The vice president must take the oath of office

When a sitting president unexpectedly dies, passing presidential power to the vice president is “the most urgent task to be accomplished,” according to Mike Purdy, a presidential historian and author of 101 Presidential Insults. “While the vice president automatically becomes president upon the death of the president, [taking the oath of office] telegraphs to the nation and world the official recognition that there is a new president,” Purdy says. If the VP cannot take the oath, the Presidential Succession Act calls for the Speaker of the House of Representatives, followed by the president pro tempore of the Senate, to become president instead. No need to be red-faced, we’ve got the answers to 15 questions about the American political system you’ve been too embarrassed to ask. 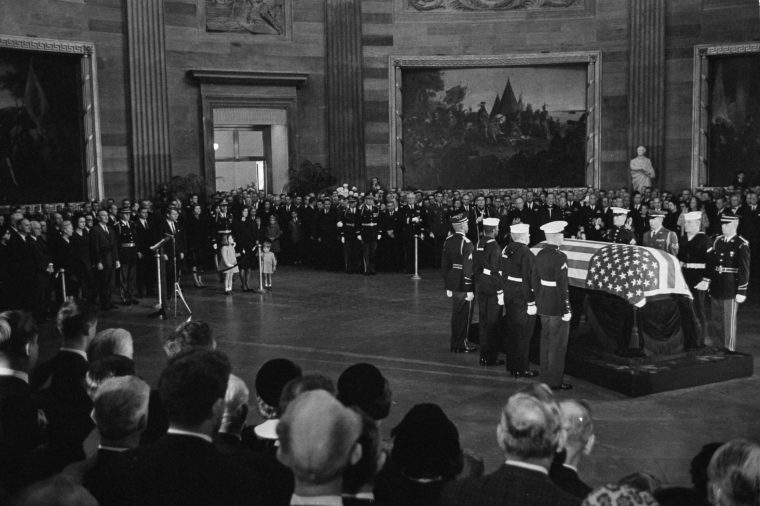 The president’s casket lies in state

It has become customary for a sitting or former president’s casket to lie in state in the Capitol Rotunda for several days, allowing the public to stop by and pay their respects, Purdy says. This is especially true for presidents who were once members of Congress, such as President Ford, who served in both the House of Representatives and the Senate. Only presidents who have passed away while in office have laid in the White House for viewing, according to the Associated Press. Franklin Roosevelt, William H. Harrison, and Zachary Taylor all laid in state in the White House’s East Room, and the latter two were even honored with a funeral ceremony there. 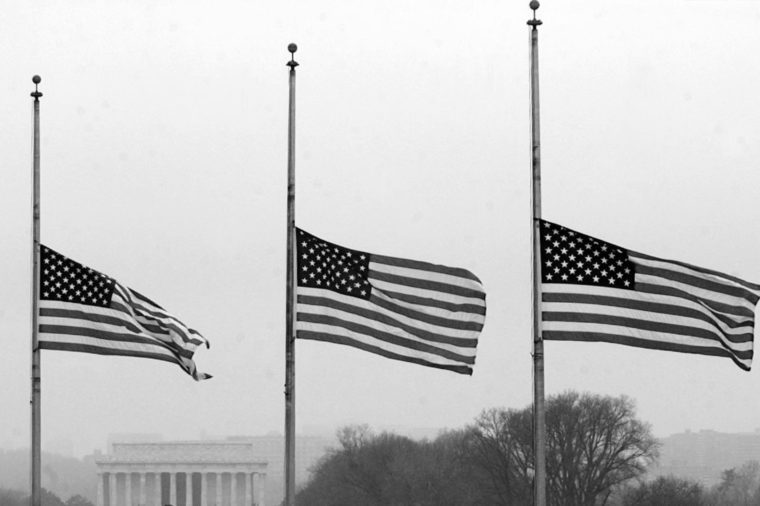 Per federal law, all government buildings, public schools, offices, and military bases must lower their flags to half-staff when a U.S. president dies, according to Purdy. The sitting president is also expected to issue an official announcement of the death, as well as authorize the closure of federal buildings, agencies, and departments to observe a national day of mourning. Yet despite being the leader of the most powerful nation in the world, no U.S. president is allowed to do these surprising, everyday things while in office. 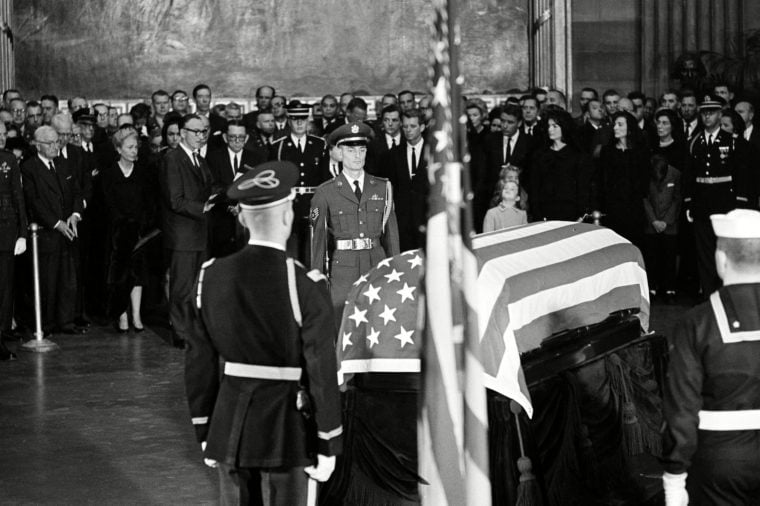 The U.S. military plays a unique role in the days immediately following a sitting or former president’s death. On the day after a president dies, the military fires one gun every half hour as a symbolic salute to their former commander-in-chief. The commanding general of the Joint Task Force-National Capital Region (JTF-NCR) also serves as the military escort for the deceased president’s family from the time of the official announcement to the burial. If you don’t believe the presidency ages people, get a look at these before-and-after photos of how presidents have aged while in office. 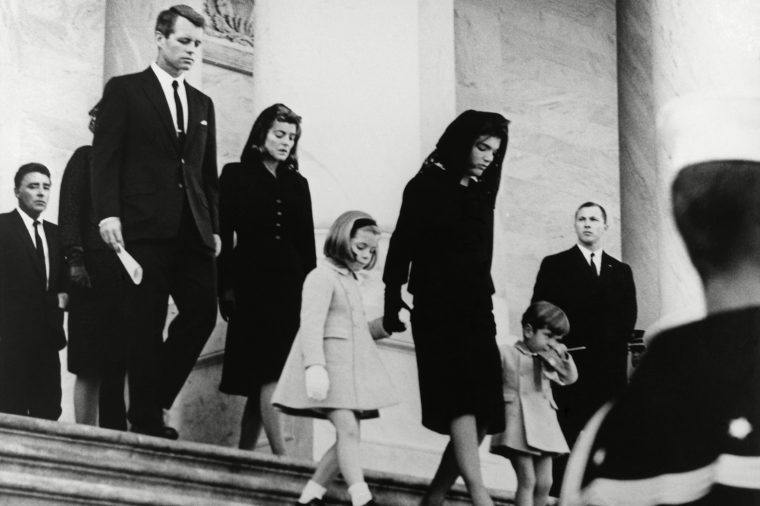 The president’s family plans the funeral

Morbid though it may seem, one of the first tasks a new president must complete is to plan his own funeral service, according to the White House Historical Association. Yet it is the president’s family who ultimately coordinates the funeral upon his death. Family members often choose to add symbolic touches to the ceremony; for example, widowed First Lady Jacqueline Kennedy modeled John F. Kennedy’s funeral after Abraham Lincoln’s. “They can choose to have a simple funeral; they can choose to have a full honor funeral. It simply is up to the family,” Barbara Owens, state funeral planner for JTF-NCR, told the Associated Press. 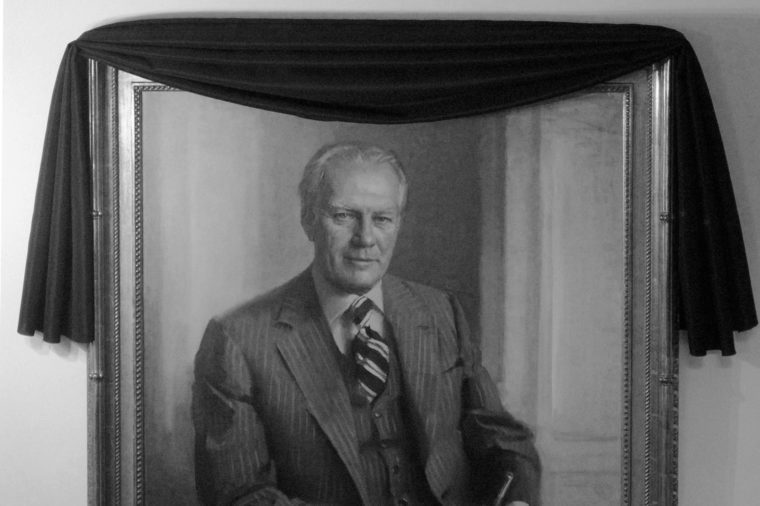 Important venues are draped in black

As a symbol of mourning and to honor the life and legacy of President Gerald Ford, his official portrait in the White House was draped with black fabric—and white roses were arranged on a table beneath it—when Ford passed, according to the White House Historical Association. When President William H. Harrison died just 30 days after his inauguration, his funeral planner requested for the entire White House to be draped in black, and many official buildings and private residences followed suit. Learn more presidential firsts they didn’t teach you in school. 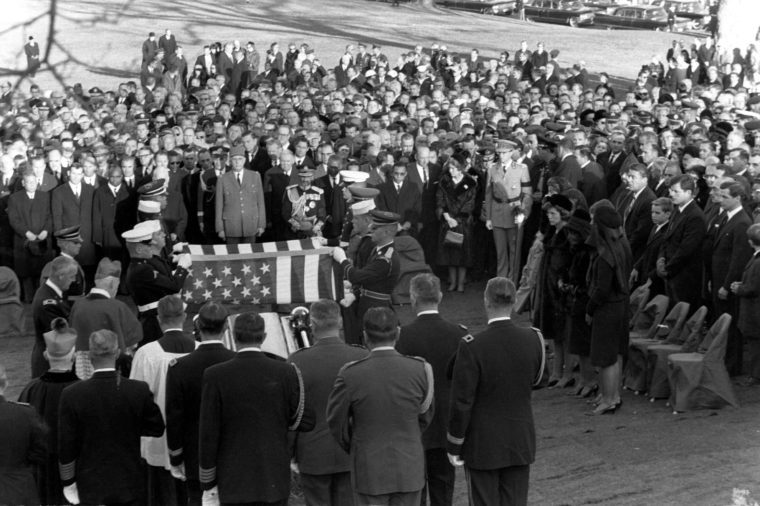 It’s no secret that presidential funerals are far from simple, easy-going affairs. Instead, each detail is meticulously planned—all the way down to where the funeral attendees must sit. According to the Associated Press, “the presidential party is followed by chiefs of state, arranged alphabetically by the English spelling of their countries. Royalty representing chiefs of state come next, and then heads of governments followed by other officials.” Bet you didn’t know these 52 astonishing facts about the U.S. presidents, either. 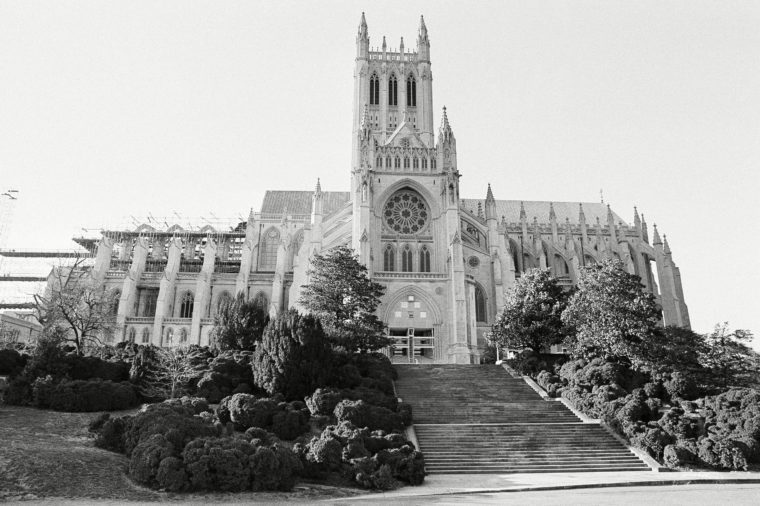 Both private and public services are held over the five-day span of events to pay tribute to a deceased president. Though the private service is reserved for grieving family members and friends, the national funeral service includes attendees from around the world. This ceremony is almost always held at the Washington National Cathedral in Washington, D.C. and often shuts down the nation’s capital for days. As for the funeral’s actual arrangements, “the ornateness and symbolism will vary with the president’s popularity and political coalition,” according to Elizabeth Sanders, professor of American politics at Cornell University. 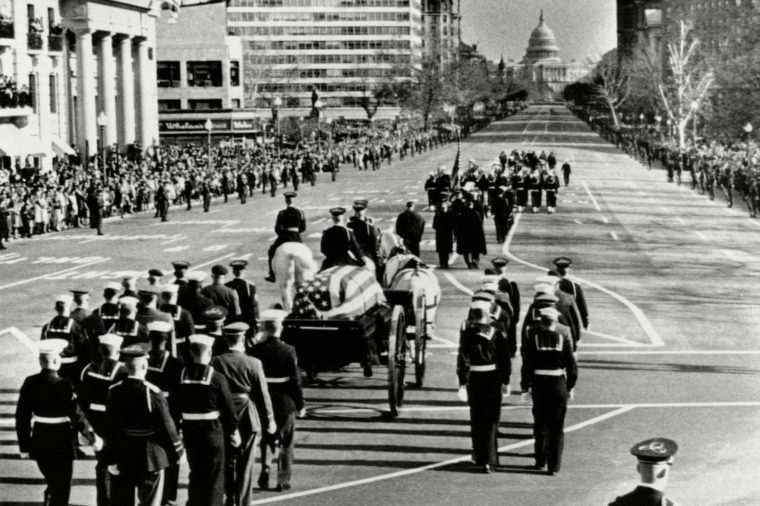 The funeral procession marches through D.C.

Before a presidential casket heads to its final resting place, it might travel down Pennsylvania Avenue in Washington, D.C. one last time. Some presidents have requested for their casket to be carried by a traditional horse-drawn carriage, while others have preferred to use a modern motorcade. These processions are by no means the norm, as just eight deceased presidents have had them. But there is one thing that all processions have in common: They must move at a speed of exactly 20 miles (about 32 km) per hour in order to make sure the day’s events stay on schedule. 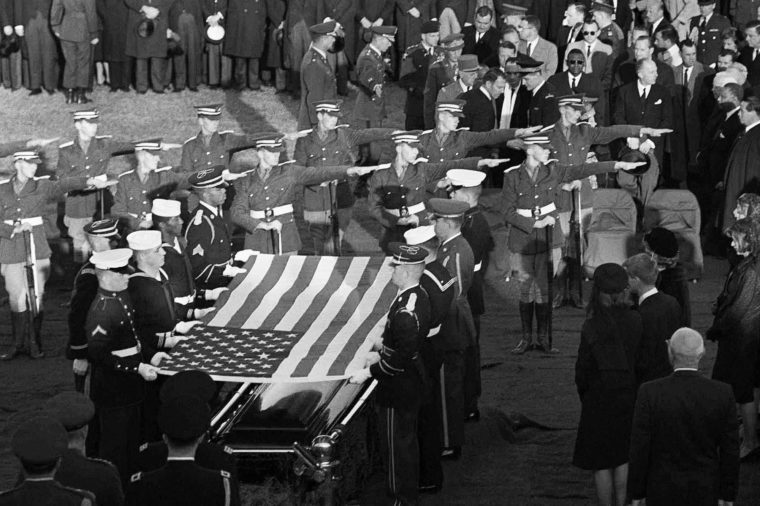 All U.S. presidents, as former commanders-in-chief of the United States Armed Forces, are entitled to receive full military honors at their funerals. Tradition calls for their caskets to be draped with an American flag and carried on the shoulders of a nine-person team from the Armed Forces during the funeral service. On the day of the burial, seven honor guards form a rifle party and fire a three-volley salute over the gravesite—a custom that dates back to the Roman military. By the way, there is a rather spooky coincidence regarding many of the presidential deaths. 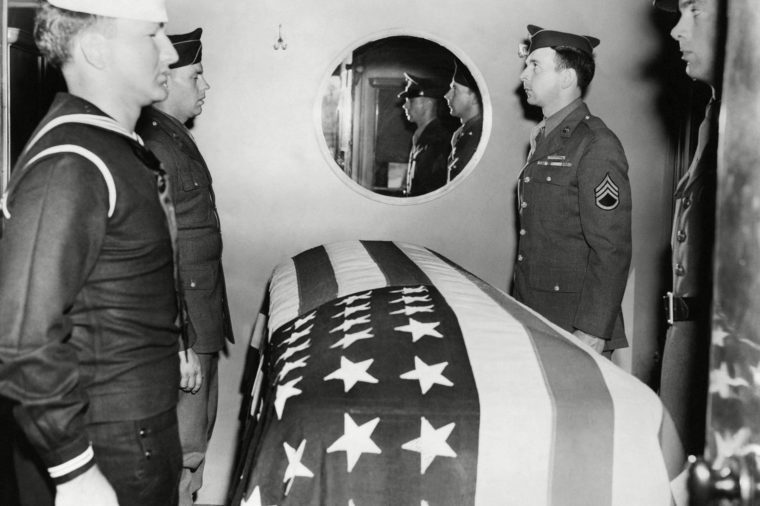 The casket crosses the country by train

Back before the days of airplanes and highways, a train often carried the body of a deceased president across the country to its final resting place, according to Purdy. “This allowed thousands of Americans to pay their respects as the train passed their cities, towns, and farms,” he says. Former presidents Abraham Lincoln, Ulysses S. Grant, William McKinley, Franklin D. Roosevelt, and Dwight Eisenhower all had a presidential funeral train procession. When George H.W. Bush recently passed away, his family also opted to follow this tradition. 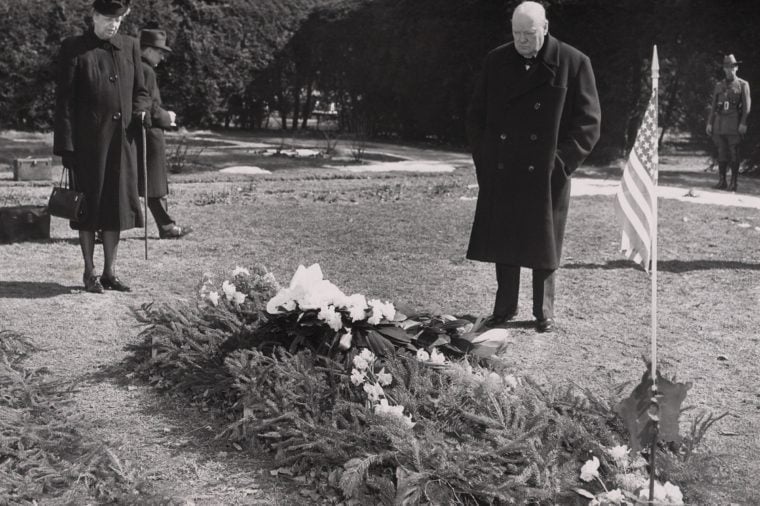 The president is buried at a personal site

Presidents often choose to be buried in a place that holds personal significance to them or their families, such as a presidential library, hometown residence, or even a public monument. Presidents John F. Kennedy and William H. Taft are buried at Arlington National Cemetery, while Presidents Ronald Reagan and George H.W. Bush are buried on the grounds of their presidential libraries. Think you are a presidential expert? See if you can answer these 11 U.S. trivia questions about presidents that everyone gets wrong. 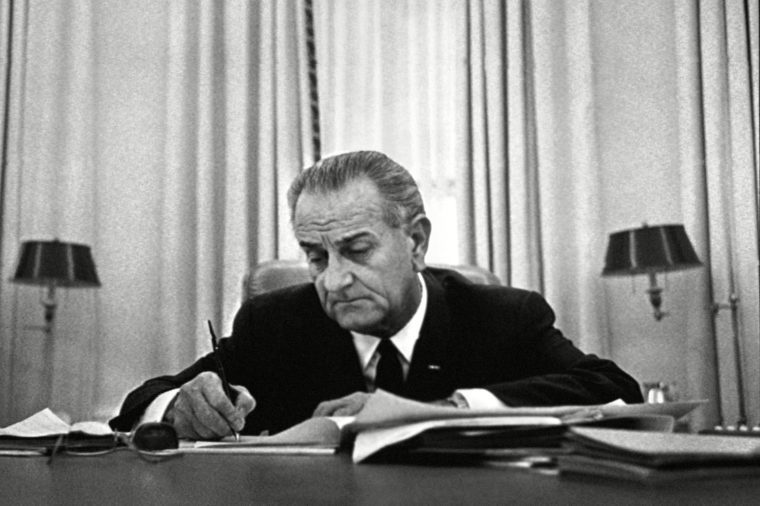 A new president must get up to speed

After the new president takes the oath of office, he is expected to meet with the Cabinet and congressional leaders, as well as make calls to foreign leaders. He will also be briefed on any issues the former president was working on before he passed away, according to Purdy. And if the circumstances surrounding the former president’s death are suspicious—such as in the event of an assassination—the new president may also help to coordinate a government response or investigation. Here’s more U.S. trivia your history teacher never taught you.