How Do 3D Printers Work, Exactly?

They may sound futuristic, but 3D printers are everywhere. Here’s what you need to know about how 3D printers work—and why they have the potential to change the world.

Imagine being able to use a home printer to create your own decor, musical instruments or cameras. Or what if manufacturers could print customizable car parts, or doctors didn’t have to worry about donor lists and could simply print the organs their patients needed? This and so much more is possible with 3D printing—and it’s happening now. But how do 3D printers work, and can anyone use them?

While the mechanisms may be complicated, the technology is becoming more affordable and accessible, and it’s surprisingly eco-friendly. Neil Gershenfeld, director of MIT’s Center for Bits and Atoms, says that there’s a “maker movement” happening right now. “If you asked the average person if they want access to computer-controlled manufacturing tools, they would probably shrug,” he says. “But if you ask if you want to be able to make custom furniture in your house and design toys for your children? That is an entirely new world of possibility.”

The 3D printing market is expected to triple to nearly $45 billion globally by 2026, and the Biden administration is touting 3D printing, or additive manufacturing, as a way to address supply chain shortages and help American families. “3D printing technology is incredible,” President Biden said in May 2022. “It can reduce parts lead times by as much as 90% and slash material costs by 90% and cut energy use in half. That all helps to lower the costs of making goods here in America.”

How, exactly? Here’s what you need to know about 3D printing—from how it’s currently being used with real-life robots to how it relates to the future of recycling and sustainable living.

What is a 3D printer?

In the end, 3D printers are literally just printers. But instead of printing words on paper, they print 3D objects, layer by layer, and can make them out of everything from carbon fiber and powders to plastic and metal. They can also combine different materials in their production—for example, metal objects that have plastic components, such as wind turbine blades and engine parts—eliminating the need for multiple machines (and workers) to produce an object. This can ultimately lower costs for companies, collapse the time frame to create a product and eliminate waste.

And 3D printers aren’t just relegated to factory floors. Consumers can also make good use out of them at home. “It’s exciting because it places manufacturing into the hands of the user,” says David Bourell, a professor of mechanical engineering and materials science and engineering at the University of Texas at Austin. “By way of analogy, many years ago, taking a photograph required a professional photographer. As photography advanced, people could take photographs themselves, which exploded photographic advances. [Here], a user can create and build without involving anyone else, which nurtures innovation and creativity.”

When was 3D printing invented?

As a concept, 3D printing has been around since 1945. That’s when sci-fi writer Murray Leinster published his short story “Things Pass By,” which described a machine with a moving arm that could turn drawings into 3D objects created out of melted plastic. The Teletype Corporation, which invented inkjet printers in the ’60s, experimented with primitive 3D printers utilizing melted wax in 1971, but it wasn’t until the 1980s that the first actual 3D printer was created.

Physicist Charles Hull came up with the idea in 1983, when using UV light to harden coatings on a tabletop, and patented the technology in 1986. At the time, he referred to the process as “stereolithography.” Meant to be used in research-and-development labs and manufacturing plants, it grew out of a general frustration with slow production times and the need for small parts in new designs.

Hull went on to start a company called 3D Systems and expanded his patents to include non-liquids. Carmakers, hospitals and aerospace companies expressed immediate interest in the promise of this invention. In 2014, Hull was inducted into the National Inventors Hall of Fame.

How many kinds of 3D printers are there?

You need to know a few things before we answer the question “How do 3D printers work?” For starters, 3D printers come in a variety of sizes and shapes, ranging from some able to fit on a desk to much bigger construction models used to make 3D-printed walls and foundations for small houses.

There are seven types of 3D printers, each with its own specific use. Fused deposition modeling (FDM) is the most popular because of its high accuracy, low cost and large material selection. FDM printers can be used to make everything from safety whistles to earbud cases to pencil holders, and this is generally what you’d get if you were to buy a 3D printer for home use.

“The process is so simple,” says Denis Cormier, a professor of industrial and systems engineering at the Rochester Institute of Technology. “They are essentially a more expensive hot-melt glue gun. A large percentage of those machines are used by hobbyists due to low cost and simplicity.” Some of the more interesting things that can be created with this kind of printer include 3D printed cars, unmanned aerial vehicles and 3D electric guitars.

Here’s a brief overview of the other 3D printers available:

How much is a 3D printer?

Believe it or not, a hobbyist can score a 3D printer for between $300 and $500. Of course, the more involved 3D printers aren’t cheap, and the more specialized and complex the field, the higher the costs. A professional 3D printer used to make furniture, food or industrial products can cost anywhere between $1,000 and $10,000, though some in the automotive, medical and aerospace industries—especially those that utilize more advanced AI—run upwards of $500,000 to $1 million. And that price tag doesn’t take into account the costs of the materials, operation and maintenance. According to All3DP, an online printing magazine, just a kilogram of metal powder can cost up to $600.

How do 3D printers work? 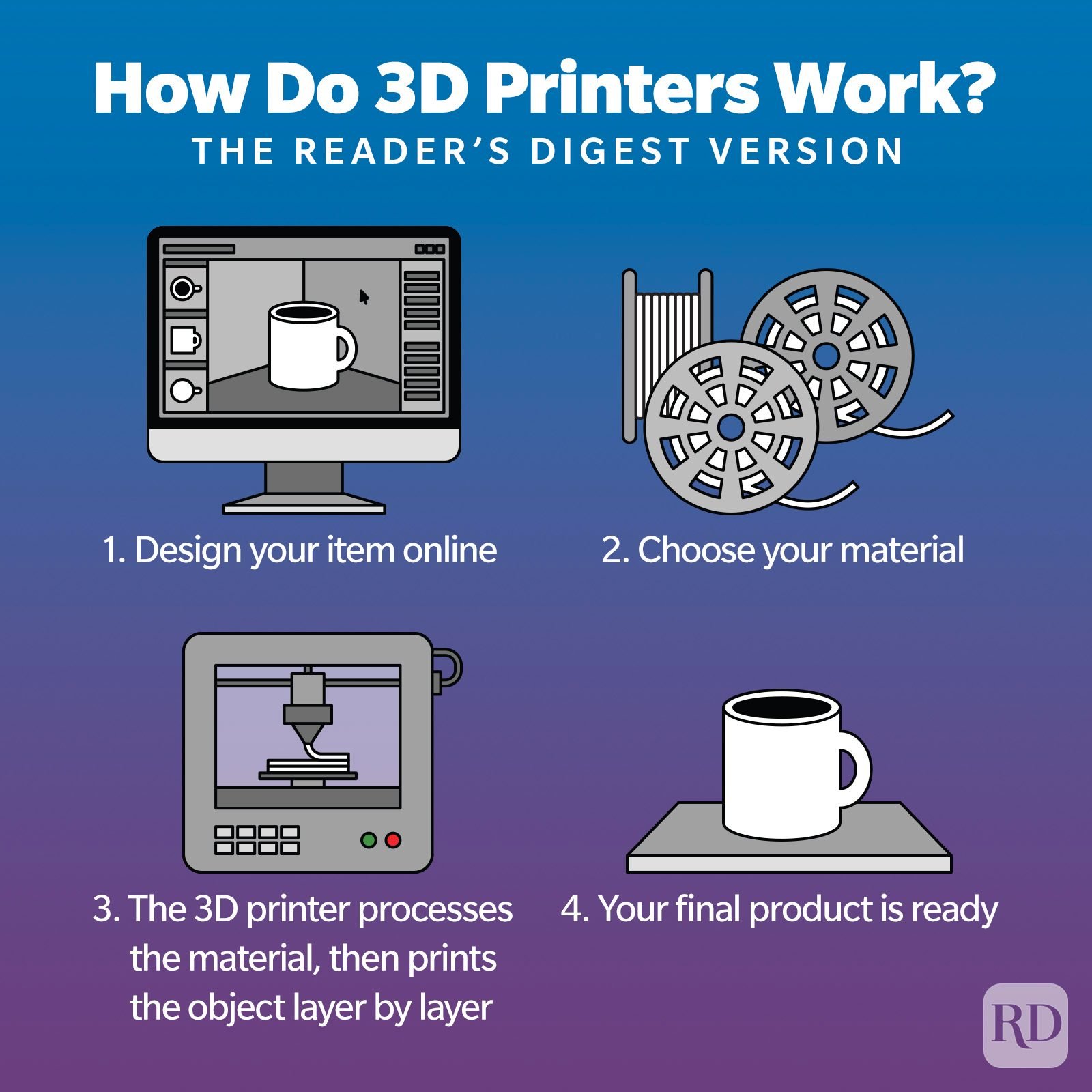 As noted earlier, 3D printers work via a process known as additive manufacturing, which utilizes computer-aided design, or CAD. This is a technical way of saying that a 3D printer uses a computer program to build an object layer by layer. While each 3D printer works slightly differently, the basic concept begins by designing the object you want to print on a computer. The modeling software is incredibly precise, and it creates a 3D model of your design. Rhino is one of the most popular 3D printing programs on the market right now.

When you print your creation on a 3D printer, it comes out in slices. Each small layer sticks together to form a single object from the bottom up. Each overlapping thin layer can be rather complex and can even include moving parts like hinges and wheels. This process continues until the model is complete.

The most common material from which 3D printers build objects is thermoplastic filament, which is essentially the “ink” in these printers. This material is known for its flexibility and durability. Other materials 3D printers use include plastics, powders, resins and metals. Because the 3D printer creates only what the program tells it to create, as opposed to crafting it from bulk raw materials, this type of production can reduce waste, creating more sustainability within businesses and causing a positive ripple effect for the environment.

What can you make with a 3D printer?

Theoretically speaking, you can make anything with a 3D printer, though its main uses are in manufacturing and prototyping, construction, medicine and education. Currently, we have the ability to make telescopes, cameras, metal parts for machines, plastic toys, ceramic cups, stoneware vases and even cakes—yes, cakes you can actually eat! Hobbyists can create the nonindustrial items at home, and many are even selling their wares online as a side hustle. Right now, the most popular 3D printed objects include costumes, accessories, props, miniature figures and planters.

3D printers were also a pivotal tool at the height of the COVID-19 pandemic, when PPE was in short supply. Hospitals relied on 3D printers to supply their staff with gowns, masks and respirators, as well as to create parts for ventilators. One Seattle high school student even ran a mask factory from his home using a 3D printer.

The advances in medicine are arguably among some of the most exciting, with scientists able to create prosthetics and implants via 3D printing. They can also create actual body parts like ears from stem cells, collagen and structural proteins in the human body called fibrin; this process is known as bioprinting, though much of it is still in the testing phases. Additionally, researchers can test pharmaceuticals easily and ethically with tissue created from 3D printers. 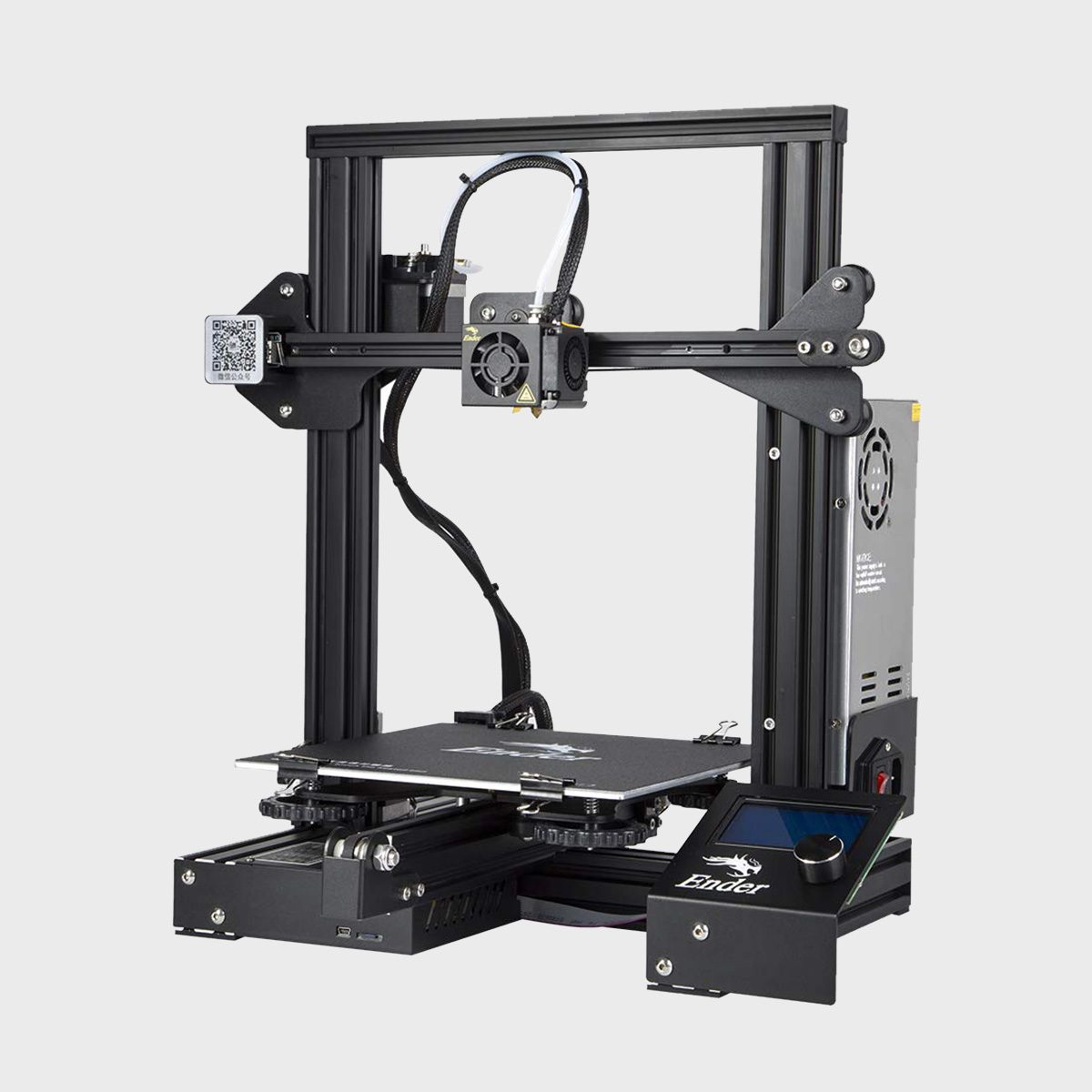 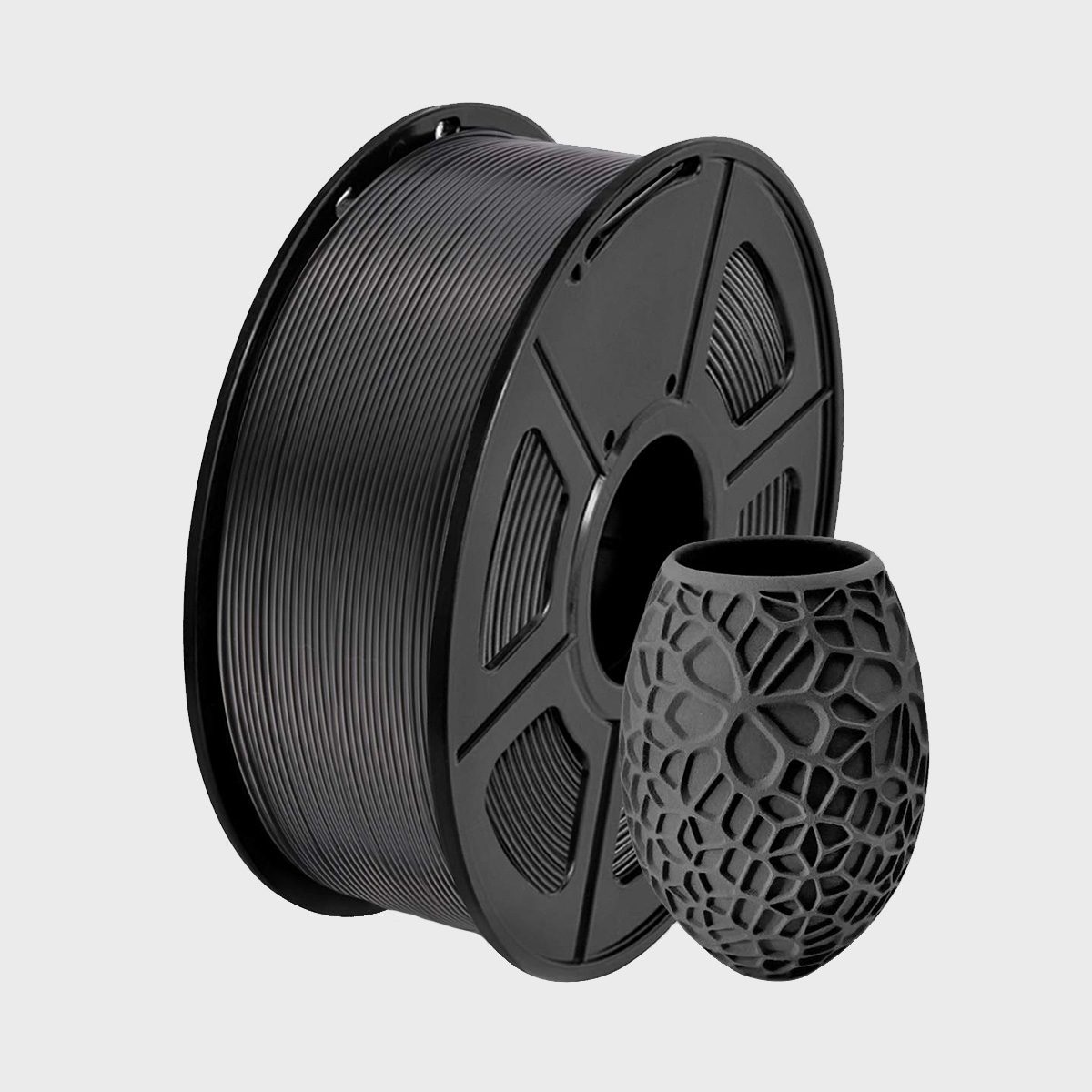 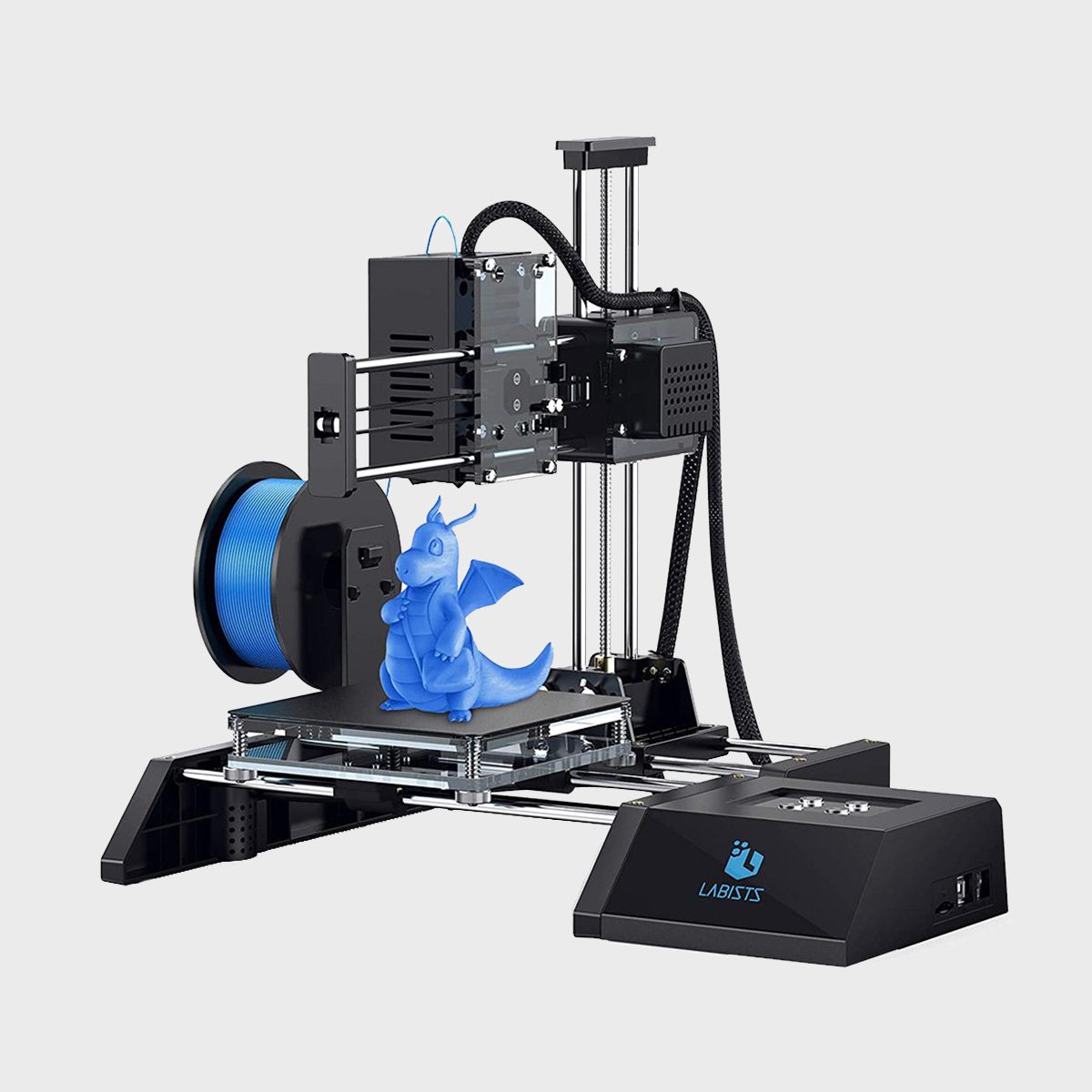 What does the future hold for 3D printing?

In the future, designers and hobbyists may not be asking the question “How do 3D printers work?” because 3D printers will likely be so interwoven in our daily lives. Today, kids are being taught about 3D printing in elementary school, and many local libraries currently have the machines available, as do stores like UPS and Staples.

Honestly, the possibilities are endless in the aerospace, electronic, medical, energy and automotive industries, where 3D printers will become even more vital tools. While this can be handy when it comes to cars, which can be customized for buyers, it is even more essential in the medical field. While we’re still probably 10 to 15 years away from 3D printed organs like kidneys, this scientific advancement is most definitely on the horizon.

And consider the opportunities in space, where the defense and aerospace 3D printing market is expected to reach $5.58 billon by 2026. In the future, 3D printing could transform space exploration and space tourism by allowing astronauts to create objects they need on demand—while in space. Imagine a future in which buildings and food are created in space!

When will you be able to print nearly anything at home? We’re getting there. “We are at the doorway of a manufacturing age,” Bourell says, “which I believe may have comparable impact as the Information Age.”

What to Know About Self-Driving Cars

What Is the Metaverse, Exactly?

Web3 Is the Future of the Internet