They’re the subjects of constant scrutiny and speculation, but what’s really going on in Harry and Meghan's relationship? These images reveal the true story. 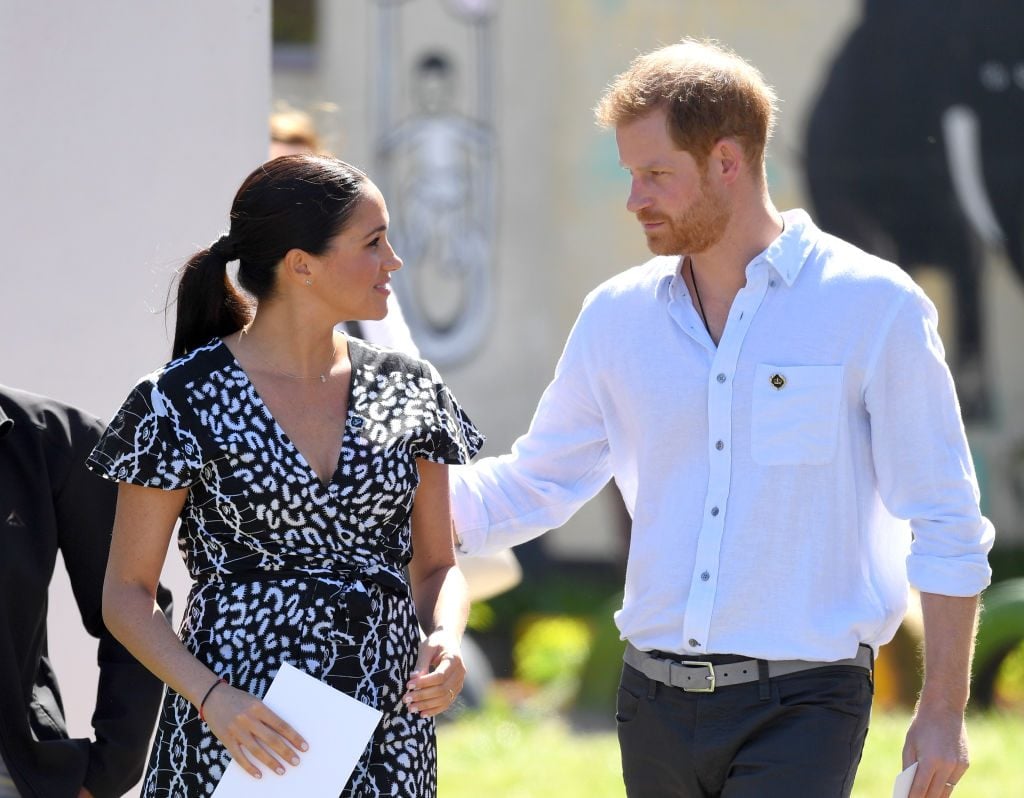 Twenty-four years after the untimely passing of Princess Diana, her two sons appear to be doing quite well—with happy marriages, children of their own, and lives made meaningful through public service. But only one remains an active member of the royal family. In January 2020, Prince Harry, Duke of Sussex, the ginger-haired spare to the second-in-line heir to the British crown, together with his wife of two years, Meghan Markle, the Duchess of Sussex, stepped back from their royal duties in order to live an “independent” life as a family with their son, Archie. In February 2021, that move was made permanent. Although giving up the perks of royalty might be unfathomable to some, it’s arguable it would not be to Diana, who was never exactly at home in the royal family. However, Diana’s alienation stemmed primarily from her unhappy marriage. According to a recent sit-down with Oprah Winfrey, Harry and Meghan’s alienation was motivated by multiple factors, such as a lack of support from the royal family and bullying from the British media.

We’ve taken a look at how Princess Diana and Prince Charles’ body language gradually revealed the cracks in that relationship. We’ve also taken a look at how Diana’s body language was telling that story long before it went public. As Prince Harry is 36, the age his mother was at her death, it seems like a good time to learn more about the relationship between the Duke and Duchess of Sussex by looking at a retrospective of their more iconic photos. Here’s what Patti Wood, author of Snap: Making the Most of First Impressions, Body Language & Charisma, has to say about the past, present, and future of the House of Sussex. 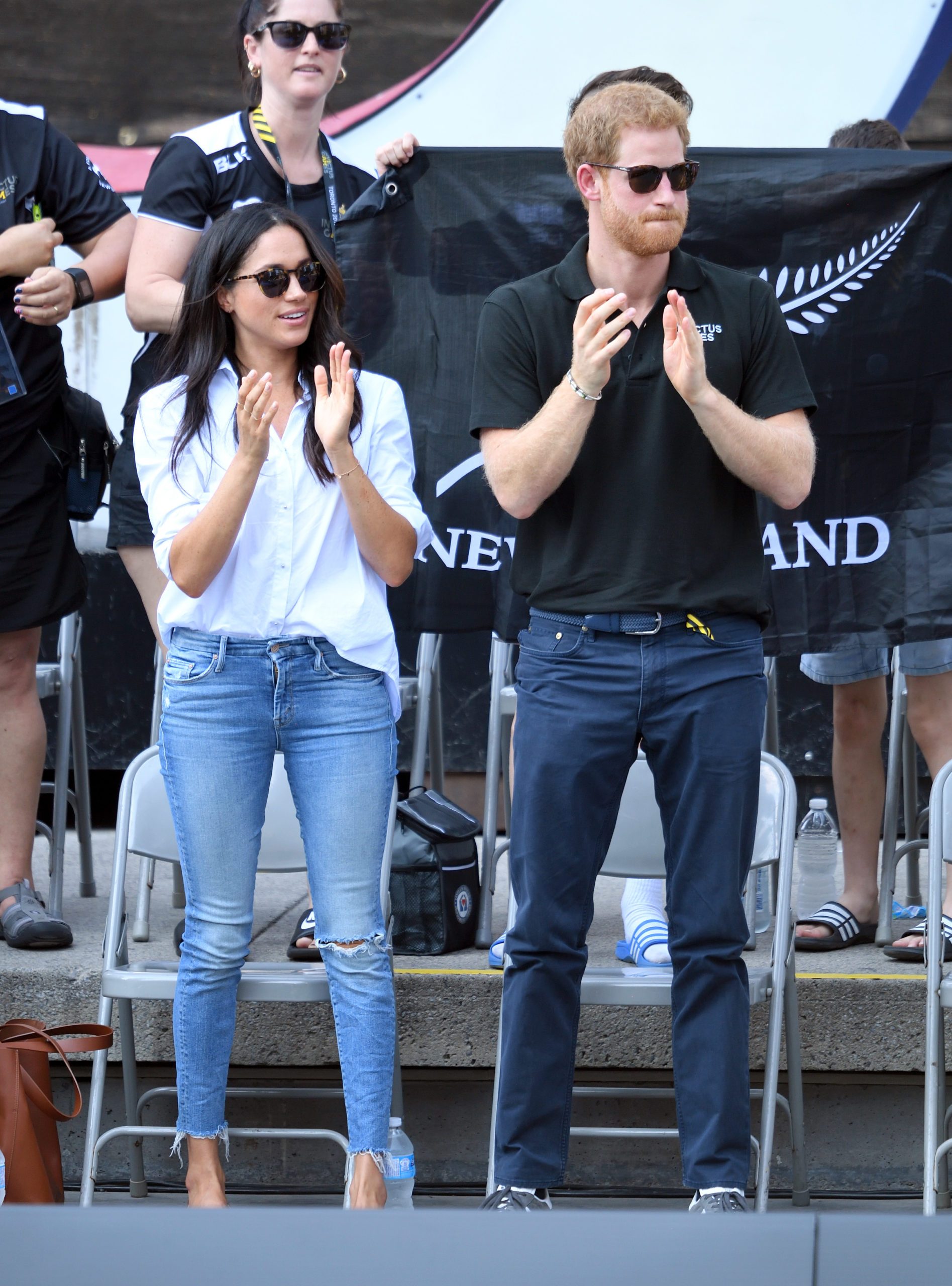 “There are so many wonderful moments of their compatibility captured here,” says Wood of this photo from the 2017 Invictus Games, which was early in Harry and Meghan’s courtship. Wood likes to read body language starting from the feet and going on up, and here, you can see how both Harry and Meghan stand with their feet equally spaced apart, their thighs at roughly the same distance, and a similar bend in their elbows and distance between their clapping hands. They are almost mirror images of each other. It’s classic “mirroring and matching,” Wood points out, and although the photo was taken early in their relationship, it speaks to their compatibility going forward. See what Wood had to say about these iconic photos of Prince William and Kate Middleton. 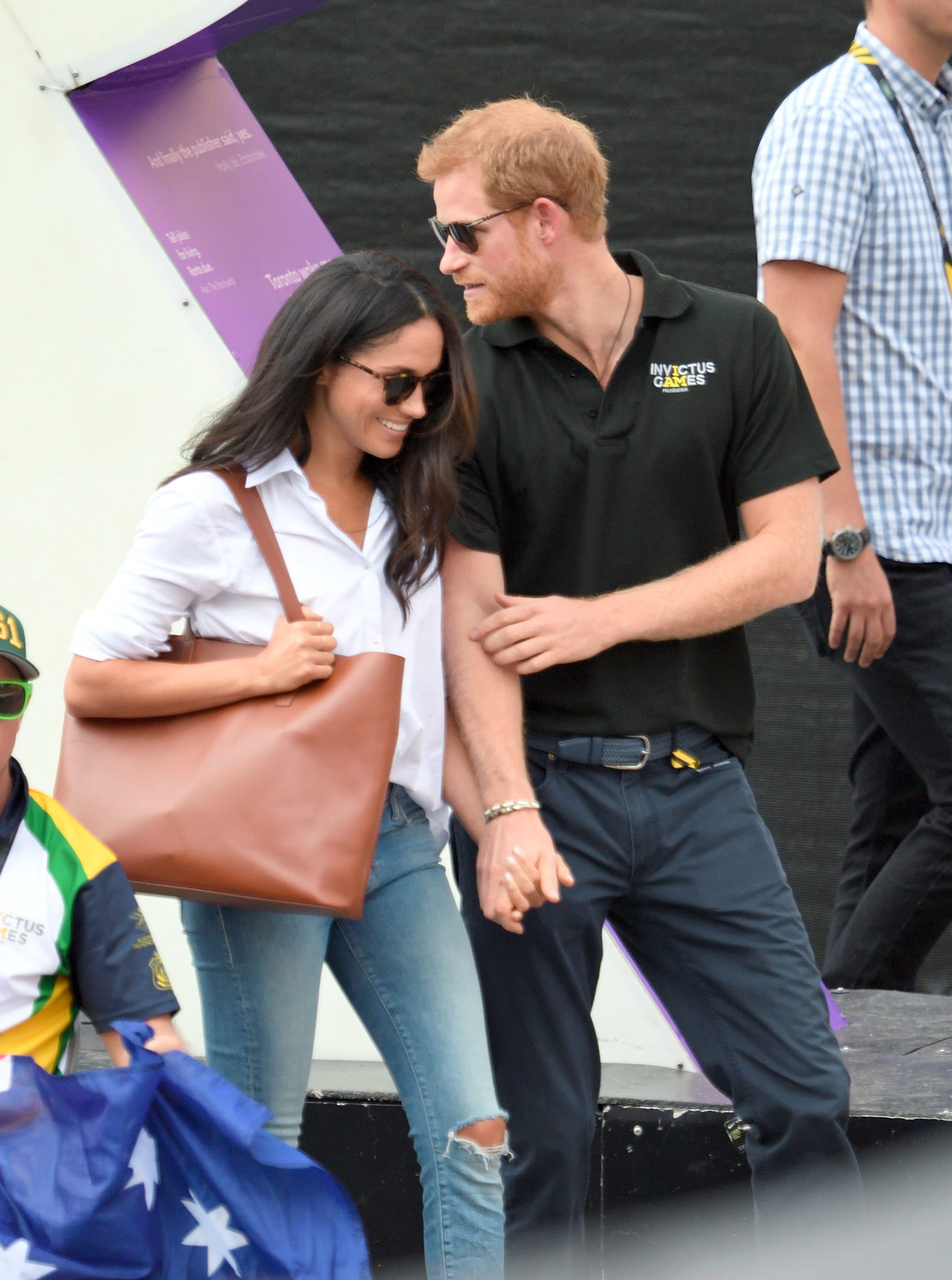 “How she makes him feel”

Also at the Invictus Games, this photo shows Prince Harry “stepping back and leaning in to have a moment of lingering intimacy with Meghan,” says Wood. “His arm overlaps hers seductively, and he keeps a broad stance, indicating how she makes him feel like a man.” But Wood’s favorite bit of body language here is perhaps the most subtle: Harry reaches across his body, seemingly to scratch an itch, but actually uses it to draw closer to Meghan. These are some of the ways that Meghan has changed Prince Harry since she became his wife. 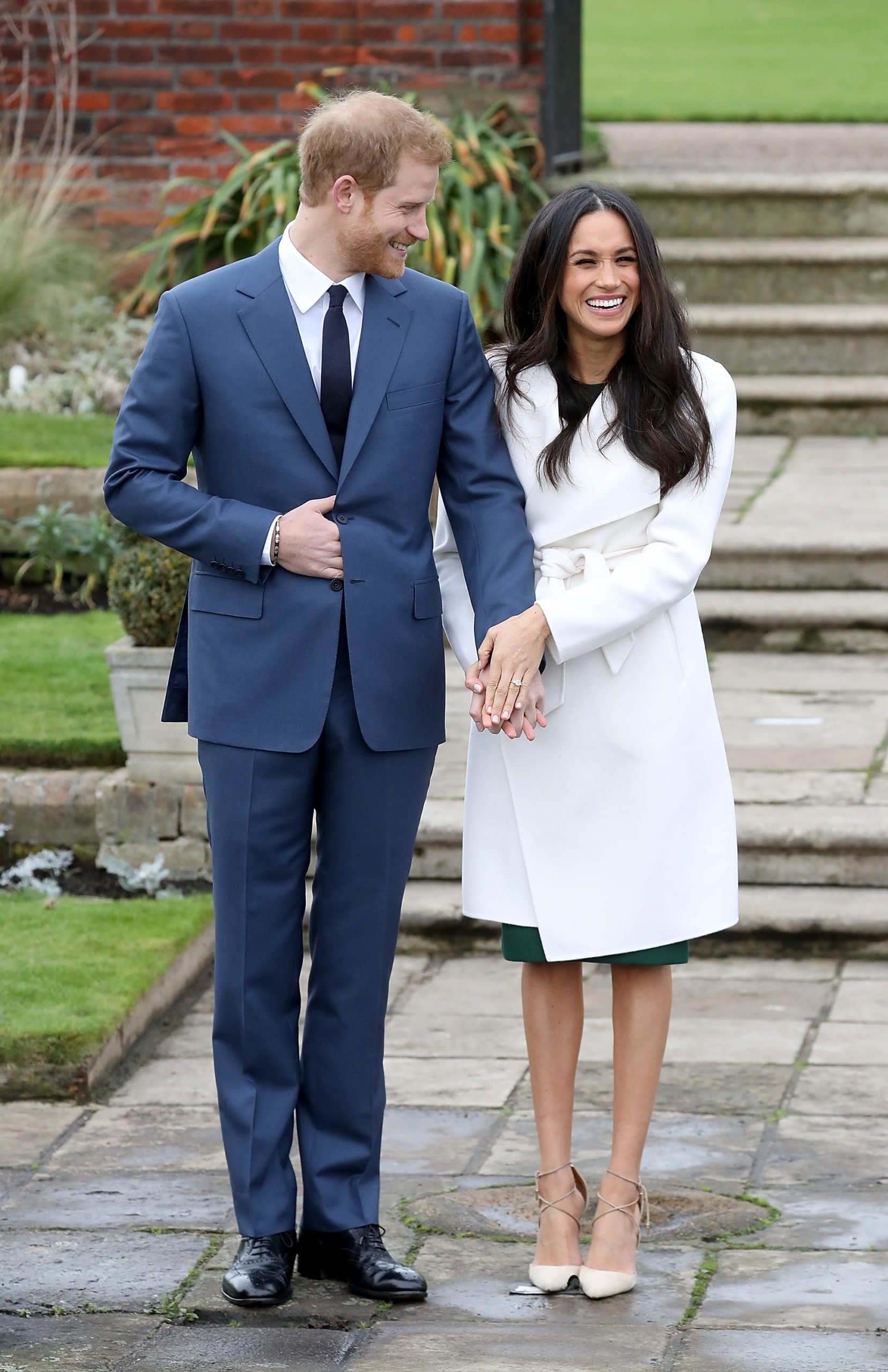 “She lights him up”

In this photo taken during an official photocall to mark their engagement, Wood sees something she recognizes as familiar in many photos of the couple—Harry looking down and back to gaze at Meghan, and it seems that she literally lights him up. That being said, it doesn’t just go the one way. You can see the joy “bubbling” up in both of them in their big smiles, and you can also see that she isn’t just holding his hand but placing the flat of her top hand over his. While this pose shows off her ring, it also indicates fondness and intimacy. “So many women hold up their right hand, away from their bodies, to show off their rings, as if the prize were the jewelry,” says Wood, but not so with Meghan, for whom it seems the prize is her connection with her fiancé. Here are 17 things you probably didn’t know about Meghan Markle. 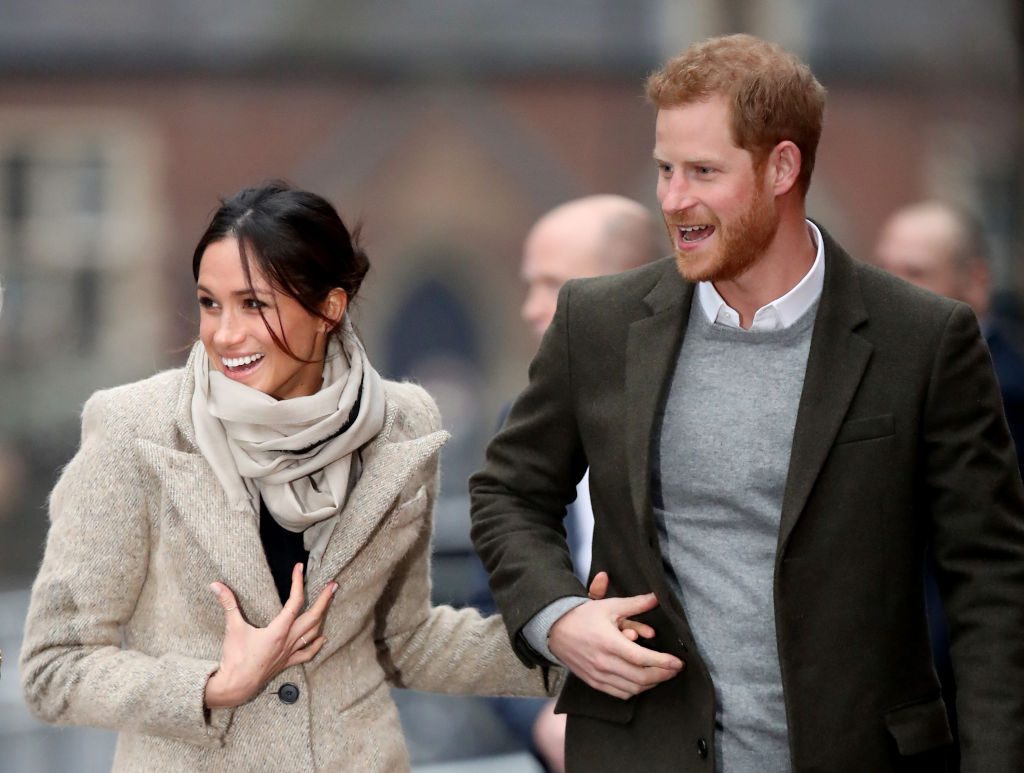 Just in case you missed it (as if that were possible), here’s another photo showing both their mirroring of each other and their mirror-image alignment. In this photo taken shortly after their engagement was announced, the two are “aligned in a moment of happiness,” Wood says. Check out the 18 tiny details you might have missed at Harry and Meghan’s wedding. 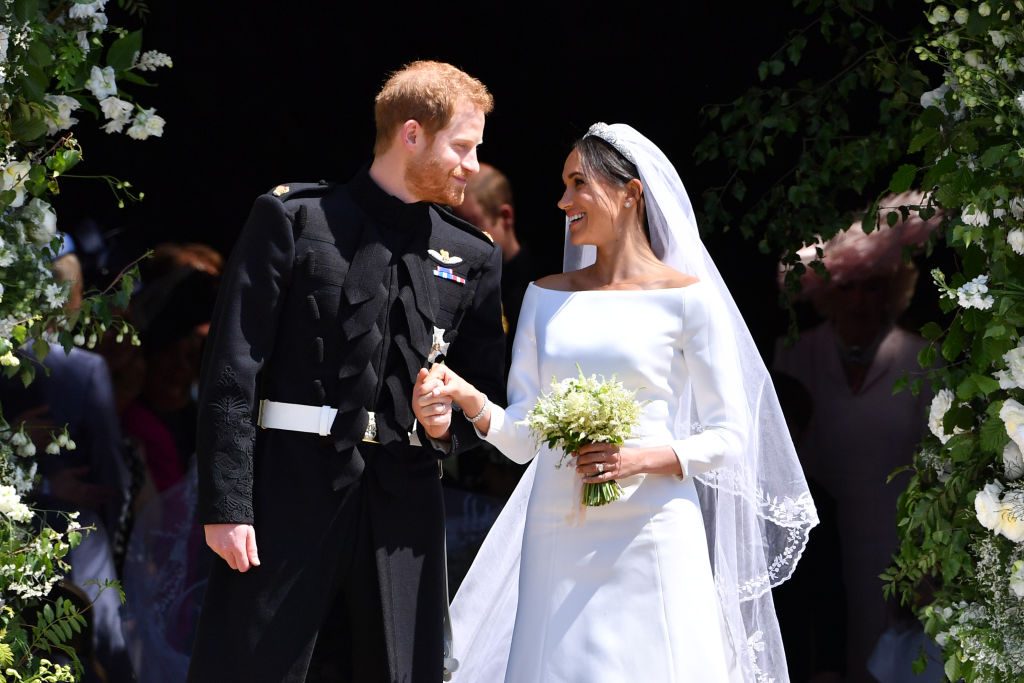 “Alone in their own world”

As the newly married Duke and Duchess exit the cathedral immediately after their wedding ceremony, it’s almost like time stops for them as they pause to connect and lock eyes. In this photo that would be seen by everyone, it is just the two of them, alone in their own world, Wood observes. Remember these 19 iconic photos from the first year of the Sussex marriage?

This photo was taken just after Harry and Meghan stepped off the plane that took them to Dubbo, Australia, for a 16-day tour of Australia, Fiji, Tonga, and New Zealand. We don’t know what made them stop at this moment, but what we do know is they take this moment to stop and look at each other, Wood points out. “It’s really one of many photos in which they’re giving each other this mutual gaze as if they’ve just now realized, ‘Look what I’ve got!'” she says.

Wood also thinks it’s worth noting that their hands are raised up in joy (the hands that aren’t clasped together). “When you see this sort of ‘up’ body language during a handhold, it’s a sign of pure happiness in couples.” Of course, some of that happiness could be from having announced, just one day earlier, that they were expecting their first baby. Here were 9 pregnancy clues you probably missed (prior to the announcement). 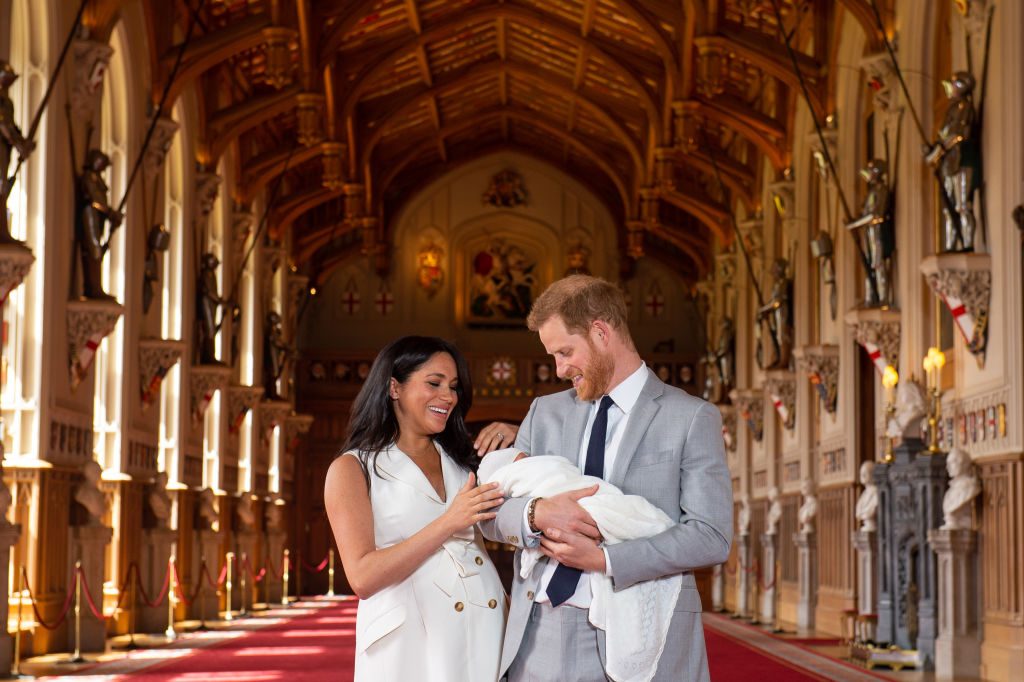 In a veritable hat trick of tradition-breaking, Harry and Meghan did a few things surrounding the birth of their son, Archie Harrison Mountbatten-Windsor, that, when looked at in hindsight, were the first clues that now that they were parents, they were going to do things their own way:

In addition to that, you have the way they are both gazing at Archie, in precisely the same way they have always gazed at each other, Wood points out. It’s obvious this burgeoning family is, first and foremost, a family. 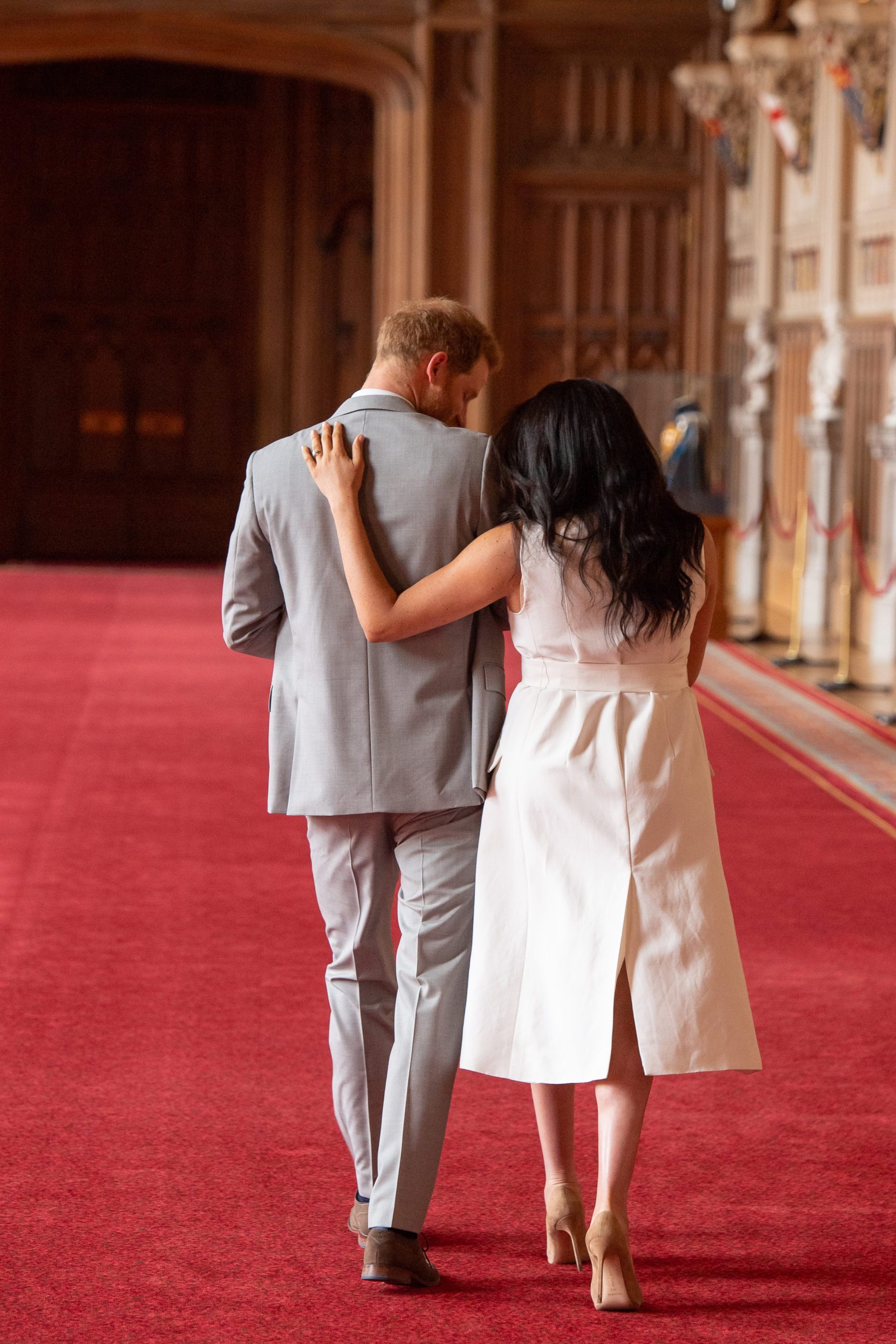 “A gesture of security and trust”

In this seemingly unguarded moment from their first days as parents, you can see again how supportive the relationship between Meghan and Harry is. It’s not just that their bodies are in sync, points out Wood. It’s also that she has placed an arm around him as if to gain strength. “It’s not a grabby, clingy gesture,” but rather “one of security and trust.” Don’t miss these 22 adorable royal baby photos throughout history. 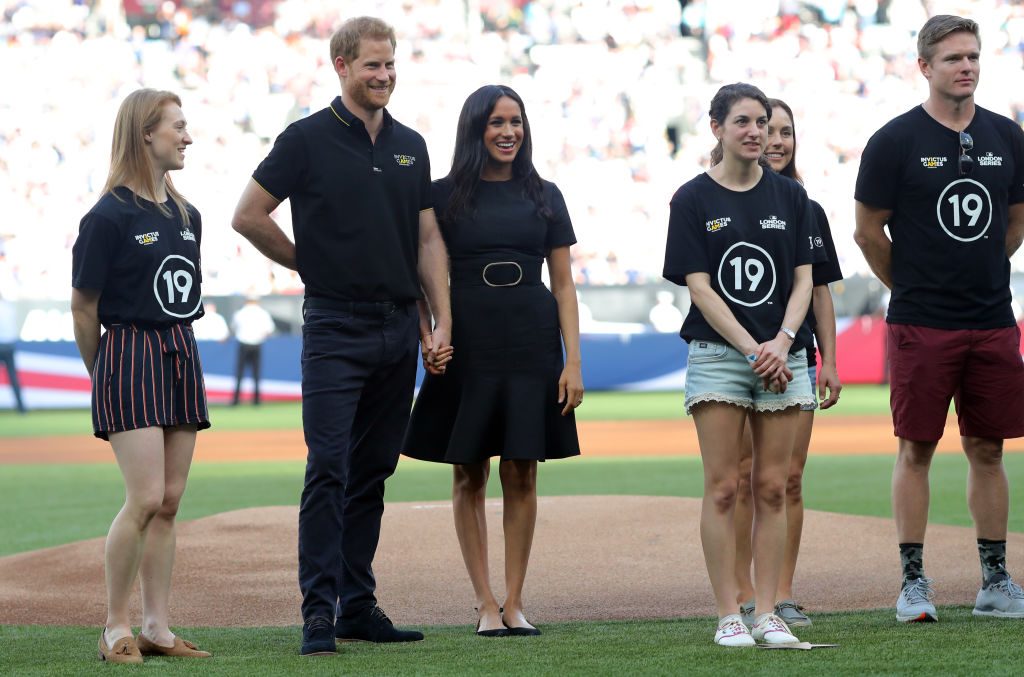 In June 2019, the Duke and Duchess of Sussex were photographed on the field at London’s Olympic Stadium, where Harry was about to throw out the “first pitch” in the London Series (in which the Boston Red Sox played the New York Yankees). “Notice how his foot nearest to Meghan points toward her, as if she’s the inner focus in the midst of this huge event,” says Wood. He’s about to throw the first pitch in a historic baseball game, and yet Meghan and his connection to her appear to be Harry’s priority. Check out these 23 rarely seen photos of the British royal family. 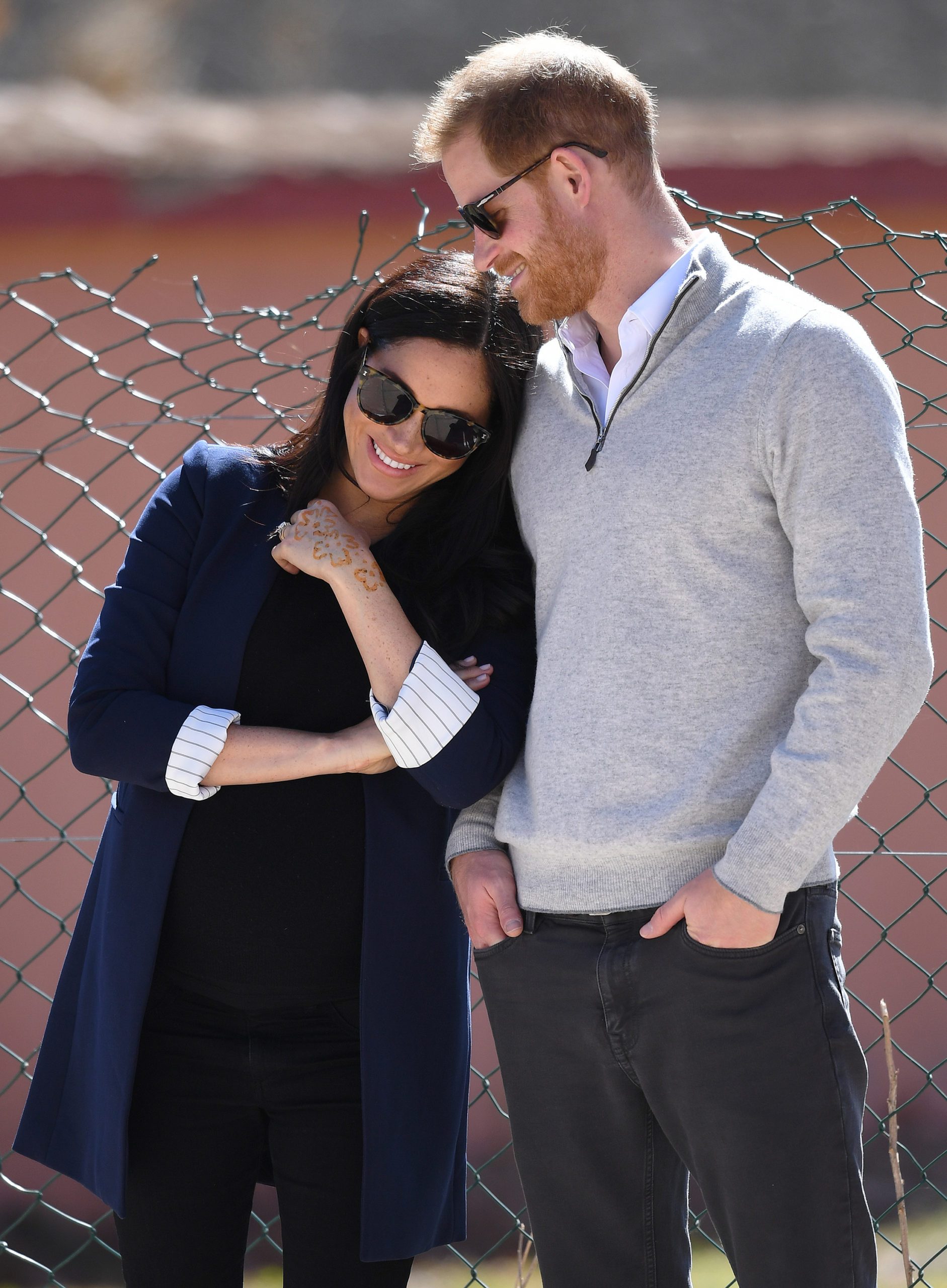 “Nestled in the crook of his shoulder”

This photo, taken in the south of France in early 2019, is one of Wood’s favorites because it so aptly expresses their connection amid the challenges that were facing them. “It’s so obviously a spontaneous moment,” Wood explains. “She’s nestled in the crook of his shoulder, and he bends his head down to get still closer.” At the same time, Meghan’s arms thrown protectively across her chest indicate discomfort—but not at Harry. Rather, the discomfort may stem from the invasiveness of the photographers into this private moment. Here are 14 of the many times Harry and Meghan broke royal protocol. 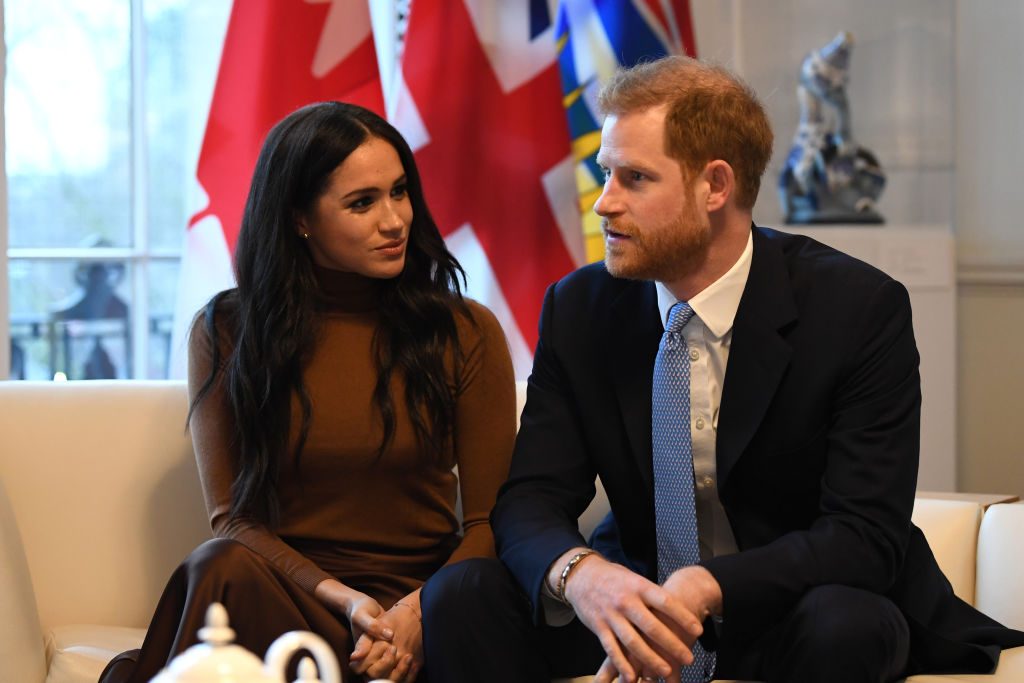 “She cannot take her eyes off him”

This photo was taken during the maelstrom of what was known in the media as “Megxit.” Here, the Duke and Duchess of Sussex, who are no longer styled as Their Royal Highnesses, visit Canada House in London on January 7, 2020, to pay tribute to the warm Canadian hospitality and support they received during their six-week stay in Canada (which was the first step in their path to independence from the royal family). What strikes Wood most about this tableau is how Meghan cannot seem to stop looking at Harry as he speaks. Sure, she’s an actress, Wood acknowledges, but she clearly cannot take her eyes off him. 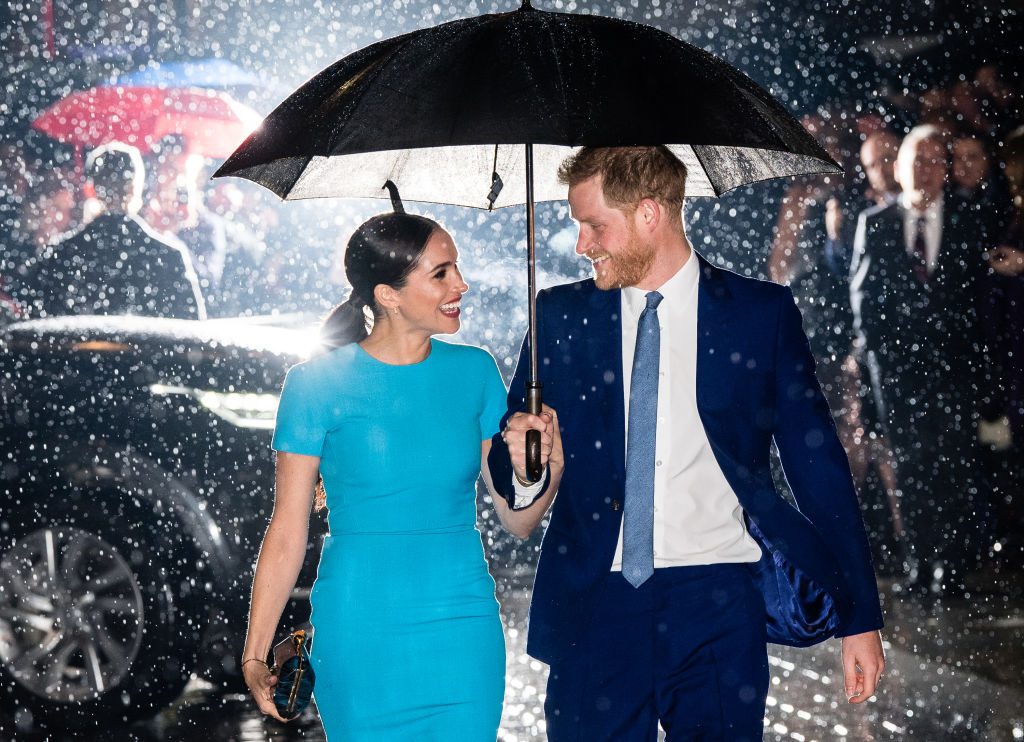 On March 5, 2020, as they prepared to step back as senior members of the royal family, Meghan and Harry are photographed under an umbrella at the Endeavour Awards, and they look happier than ever, according to Wood. “I see a freshness and lift in their postures that seems magical, protective, and exclusive,” she says. The photographer who took the photo has actually said it’s the most iconic one he’s ever taken of the couple. Take a look at these 21 photos of Meghan’s stunning transformation since becoming a royal. 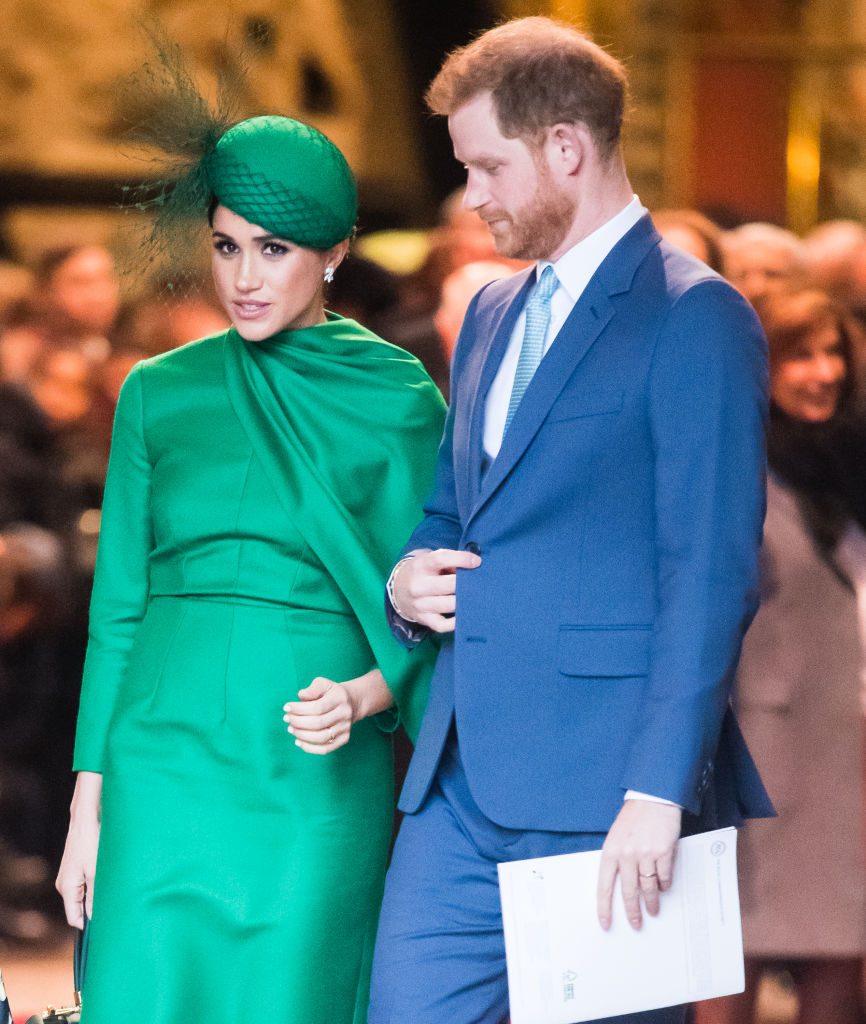 Several days after the Endeavour Awards, on March 9, 2020, Meghan and Harry made their last appearance as members of the royal family. The occasion was the Commonwealth Day service, which celebrates the broad swath of nations over which the British Monarch reigns. For such an auspicious event to mark such a life-changing transition would had to have worn heavily on the couple, and Wood can see it in their body language. Meghan is slouching with her chin down as if she could somehow will herself to disappear, and Harry, who looks as if he has not slept, offers his arm for support. While the couple appears emotionally united and as connected as ever, this time it is not out of mutual happiness, but rather, from the looks of the photo, trepidation, and worry.