14 Historic Places That Are Now Abandoned

These crumbling sites still retain an eerie sort of beauty, a sad reminder of days gone by. But don't try to sneak in—for your safety, only visit in person those that are actually open for tourists. 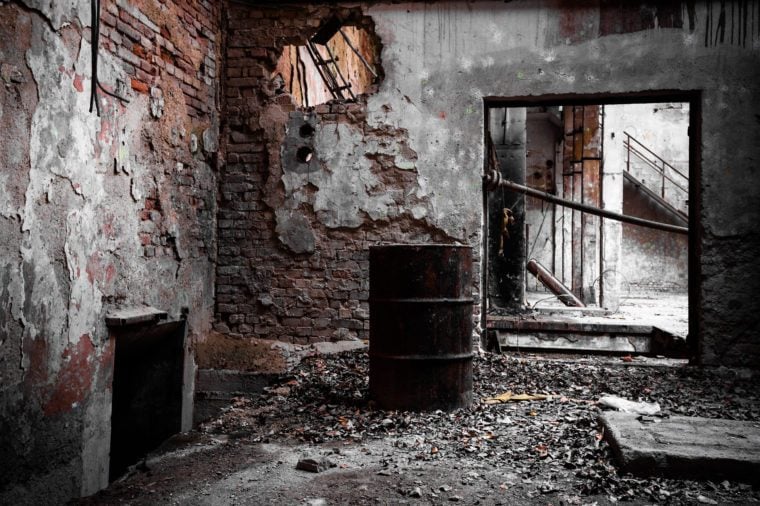 From train stations to hotels to entire islands, there are a surprising number of abandoned locales around the world. Some are even on par with the world’s spookiest travel destinations. 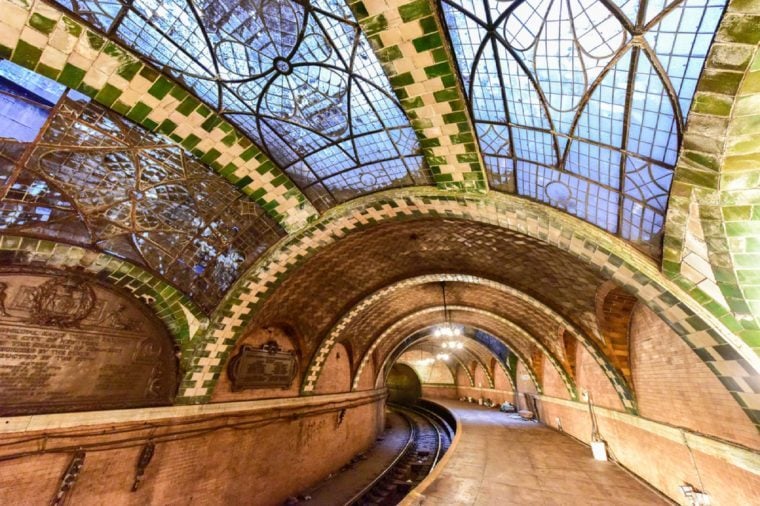 New York City’s very first subway station opened underneath City Hall in downtown Manhattan in 1904, with gorgeous vaulted, tiled ceilings and even leaded-glass skylights. But this Gilded-Age treasure closed in 1945 due to safety concerns with new, longer trains—and never opened again. You can catch a glimpse of the City Hall station if you ride the downtown 6 train past its terminal stop, as trains still use the City Hall track as a turn-around before heading back uptown. But for a better look, the New York Transit Museum offers guided tours for members. It’s one of 13 abandoned places in New York City you can still visit. 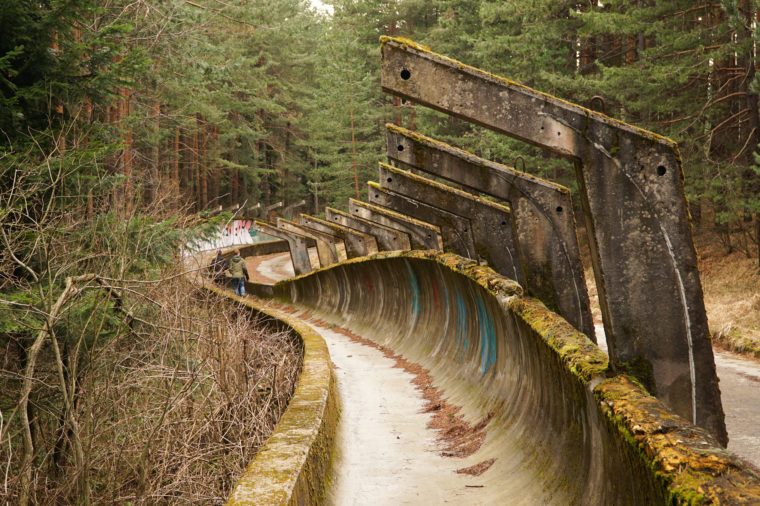 Once the place gold medal dreams came true, the 1984 Olympic venues in Sarajevo now stand as more of a memorial of civil unrest than a tribute to athletic achievement. The first Communist state to hold a Winter Games, Yugoslavia broke up in the 1990s amid a devastating war in Bosnia. Some of the Olympic sites, including the bobsled track and ski jump, were used as battlements and strongholds during the Siege of Sarajevo, and still bear bullet holes. Today, tours are offered as part of a look back at the devastation of war; some of the venues, such as Zetra Olympic Hall, are being rebuilt. 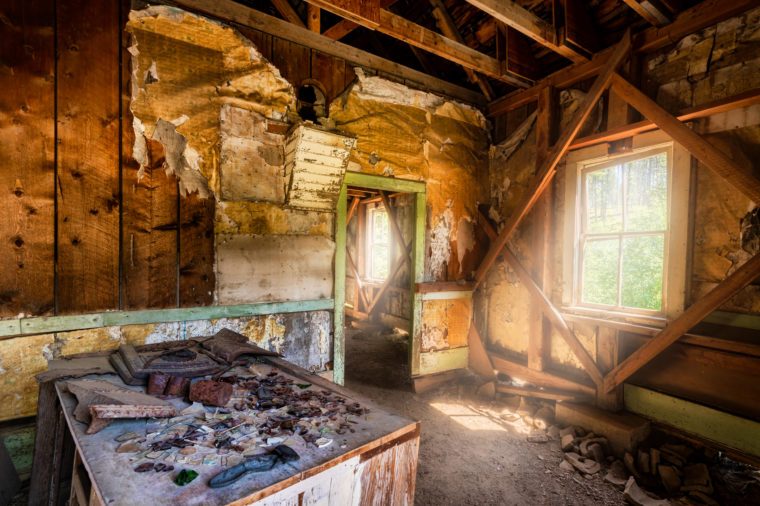 You can actually visit a real-life ghost town in remote Garnet, Montana, near Missoula. Now just a memory of the Old West, this place was once a bustling gold mining town, attracting miners in the late 19th century who hastily constructed buildings to live in. At its height in 1898, 1,000 people lived in Garnet—but by 1905, the gold ran out, and the population shrunk to 150. Then in 1912, a fire destroyed half the town. By the 1940s, no one was left, and everything, including furniture, had been left behind. Now a walk-through museum, visitors can help support the preservation efforts for this piece of American history. 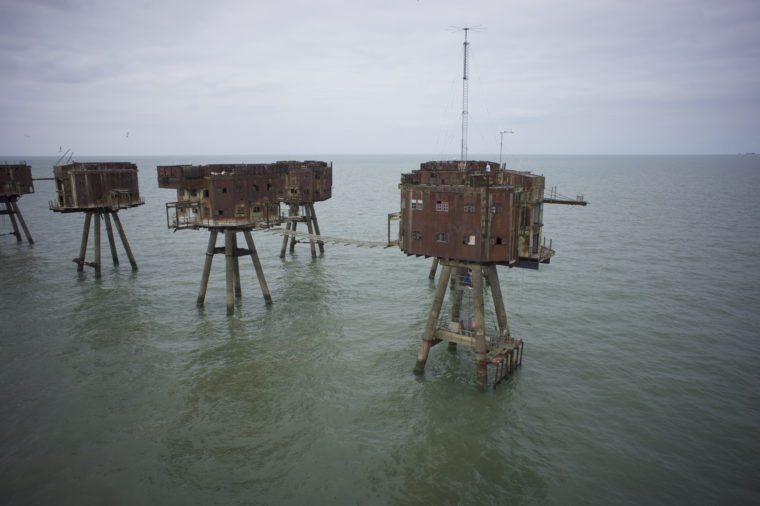 These other-worldly, rusting structures still stand sentinel at the mouth of England’s Thames River, protecting the island from a long-past threat. During World War II, the anti-aircraft sea forts guarded the country, shooting down Nazi planes and sinking a submarine. After being decommissioned in the 1950s, they served as the base of a pirate radio station in the ’60s. Now abandoned, the forts were possibly going to become a spa hotel, but those plans are now on the rocks. So for now, you’ll have to settle for getting a glimpse as you pass by via boat. 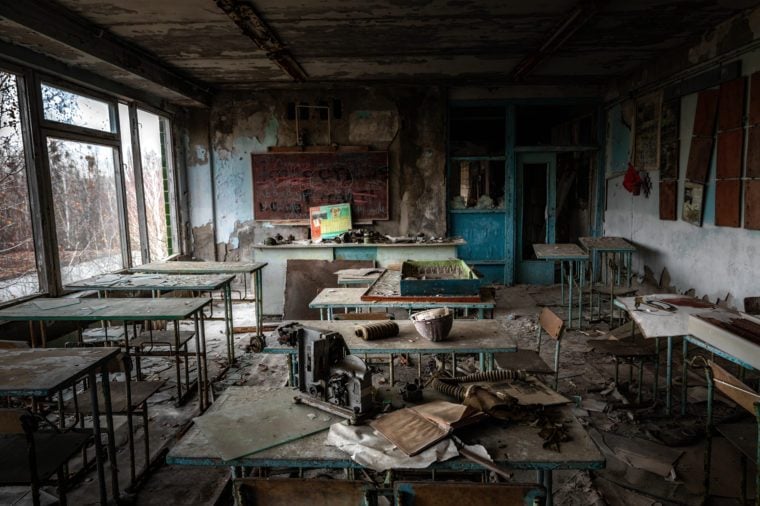 This town close to the site of the 1986 Chernobyl Nuclear Power Plant disaster has provided some of the most chilling photos of abandoned places in the world. Thirty-six hours after the explosion, the city was evacuated, with nearly 50,000 people fleeing for their lives and leaving almost everything behind. What’s left are the desolate remains of schools, houses, and communities, with clocks frozen at 11:55, the time the power went out. It looks positively post-apocalyptic. Although it may not be safe for humans to live there again due to radioactivity (well, at least not for 24,000 years at the actual disaster site, according to some estimates), a brief visit arranged by tour operators to certain areas is—reportedly—okay. These tours have seen a huge boost in popularity thanks to HBO’s recent mini-series Chernobyl. 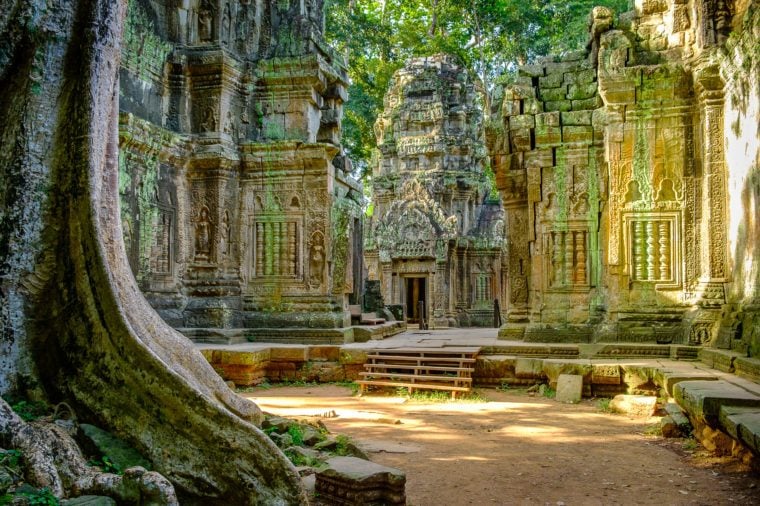 Not all abandoned places are spooky. Those from hundreds of years ago reflect a more natural cycle of human civilization on Earth, with historical ruins reminding us how we used to live, work, and worship. Take the Ta Prohm Temple, built in the 12th century: Unlike the other better-preserved temples in the Angkor area, such as the famous Angkor Wat, Ta Prohm was left to ruin in the 14th century, after which it was reclaimed by the jungle. Today, with vines and tree roots climbing over the building, this beautiful mix of human architecture and nature looks like something out of a movie—and in fact was used in the filming of Lara Croft: Tomb Raider. Happily for us, it’s open to tourists. 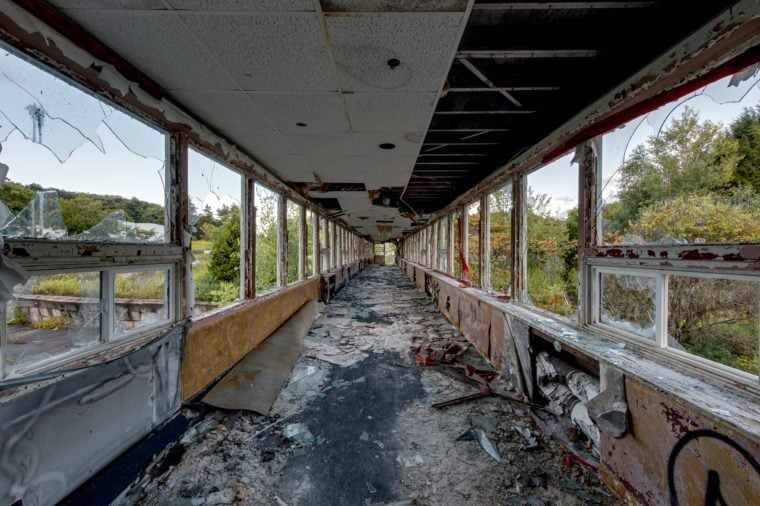 In the heyday of the 1950s, the Catskills were home to over 500 resorts catering to New York’s Jewish families, and the “Borscht Belt” continues to live on in movies and shows like Dirty Dancing and The Marvelous Mrs. Maisel. But in real life, many of these hotels, including The Pines (pictured)—once a sprawling resort with an indoor skating rink, pool with a huge concrete arch spanning across it, and “sky bridge” to the restaurant—declined in popularity and now dot the countryside in a state of ruin, ghostly remnants of the joy they were once filled with. Unfortunately, though, most of these are “attractions” so creepy, they are off-limits to tourists. 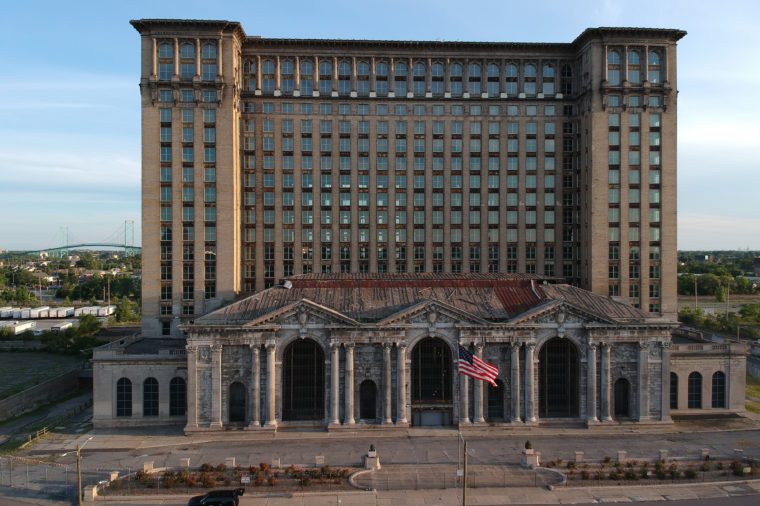 See this historic train station in its abandoned state (safely from the outside) while you can: Last year, Ford Motor Co. announced a $740 million project to redevelop the area. When it opened in 1913, the gorgeous building, with an interior featuring huge arches and marble pillars, was the tallest train station in the world. The station was Detroit’s main depot but declined in use in the 1950s until finally closing in 1988. Although its historic status saved it from demolition, the building was considered an eyesore, plundered by looters and defaced by vandals. For the people of Detroit, the station served as a metaphor for the rise and fall of the city—but hopefully, the new project can bring it back to its former glory. 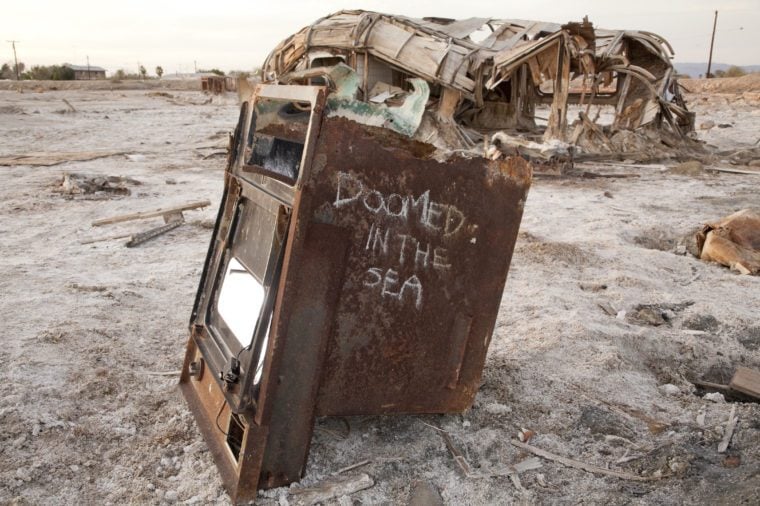 This short-lived resort area and its abandoned hotels that will give you the chills have to have one of the most bizarre histories ever. The Salton Sea, California’s largest lake, was accidentally created in 1905 after man-made canals from the Colorado River flooded over into the valley. In the 1950s, it seemed like the perfect spot for a vacation, and the Bombay Beach community popped up. But soon, increasing salinity in the lake rendered life unsustainable, resulting in dead fish washing up onshore and a horrendous stench; the lake also became polluted from agricultural runoff. So, Bombay Beach was abandoned, although a few salty souls (get it?) still live in the area. Littered with fish skeletons and the detritus of beach living, this place is a paradise lost. 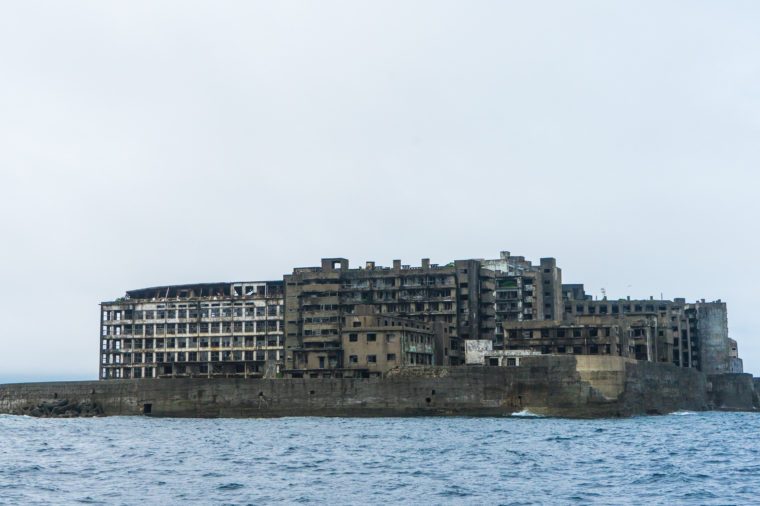 It’s no surprise why this island of concrete and steel is nicknamed “Ghost Island”: No one lives here anymore. Also called “Battleship Island” for its shape, the site stands as a monument to Japan’s rapid industrialization. With more than 5,000 people crowded into high-rise apartment buildings in the mid-20th century—now, super eerie abandoned homes like these—Hashima was one of the most densely populated places on earth. Most of those who lived here were coal miners and their families, although the island’s place in history is controversial because it was also the site of forced labor. In 1974, the mine was closed, and everyone up and left. Tours of Hashima to see the crumbling buildings are available; you can also catch the island in the 2012 James Bond film Skyfall. 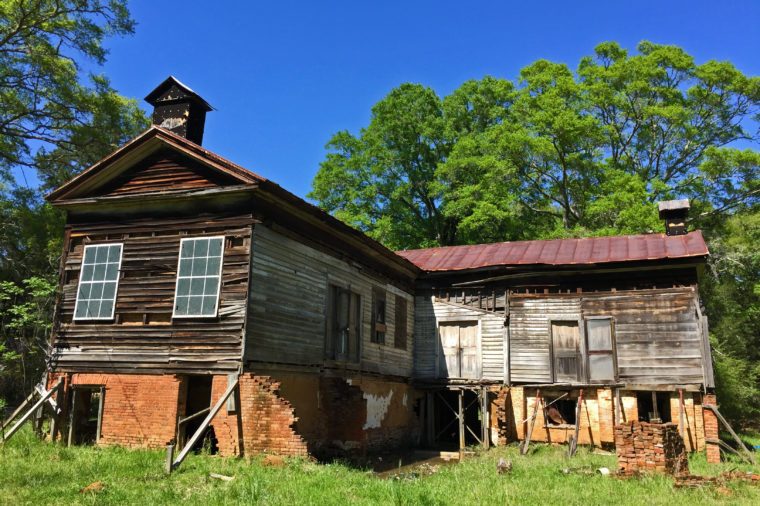 It’s hard to believe, but this site of decomposing cabins was once the capital of Alabama. Now, it’s one of 25 creepy but real ghost towns around the world. The history of Old Cahawba (also spelled Cahaba) goes in fits and starts: Chosen as the state capital in 1820, the town was abandoned after flooding and the capital moved in 1826, but it reemerged as a distribution point for cotton shipping. During the Civil War, though, its railroad tracks were ripped up and the town was host to a prison for Union soldiers; after the war, another flood drove the remaining residents out. However, the town again found new life as a community for former slave families—at least until around 1900. Since then, the town has been in ruins but is now enjoying yet another rebirth as an archaeological park. 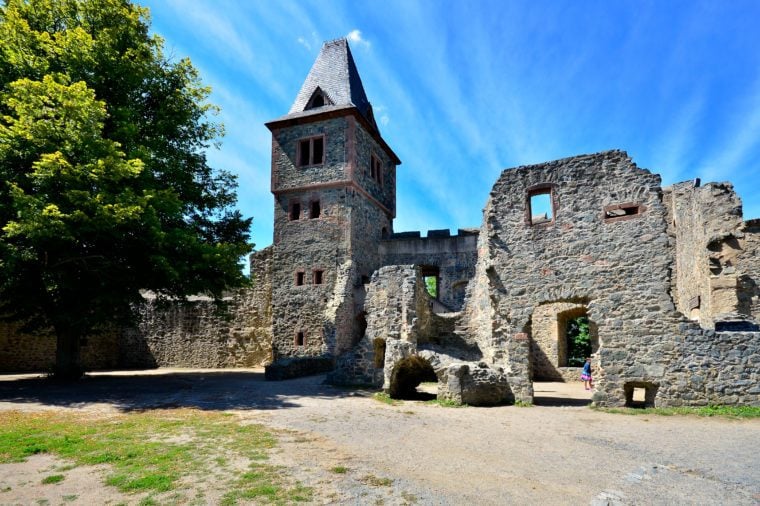 Abandoned castle ruins can be seen all over Europe, but the history of 13th century Castle Frankenstein is creepily curious because of its connection to the hidden origins of one of Halloween’s spookiest creatures. A real-life scientist named Johann Konrad Dippel conducted strange experiments here in the early 18th century—including, reportedly, on corpses. Could Dippel have inspired the fictional scientist who shares the castle’s name, and his monster? Although Frankenstein author Mary Shelley never mentioned the castle in her journals, she did pass by on a trip down the Rhine in 1814. Did she hear stories about Dippel from locals? Or perhaps her stepmother, a translator for the Brothers Grimm, read the tale and passed it on? In any case, after being abandoned in the 18th century and rumored to be the home of a dragon, the ruins of the castle are now open to tourists. 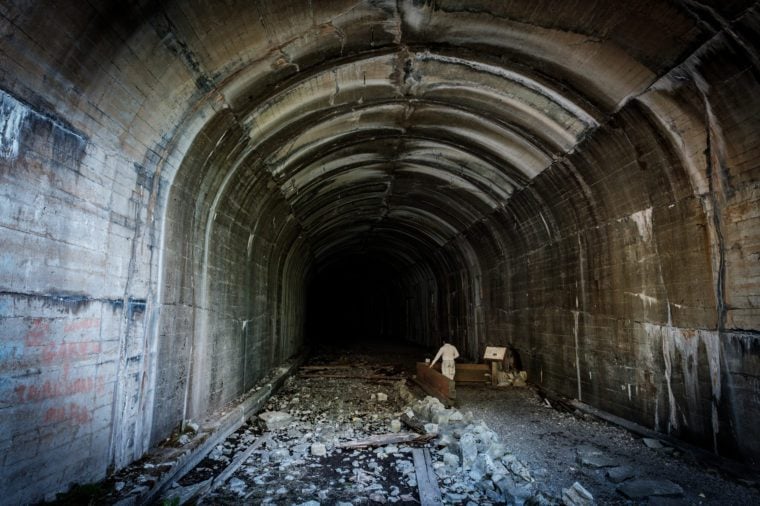 This lovely hiking trail passes by the site of one of the worst train accidents and the deadliest avalanche in U.S. history. Known as the Wellington Avalanche Disaster, the incident occurred when two snowed-in trains on the Great Northern Railroad were knocked off the tracks by what one witness described as “white death.” The snow buried the trains in the canyon below and killed nearly 100 people. Afterward, safer tracks and tunnels were built, but the old abandoned ones remain—some say they’re haunted, with hikers hearing screams and sounds around the crash site. It’s not safe to go into the tunnels, so don’t try it, but you can take a peek from outside. 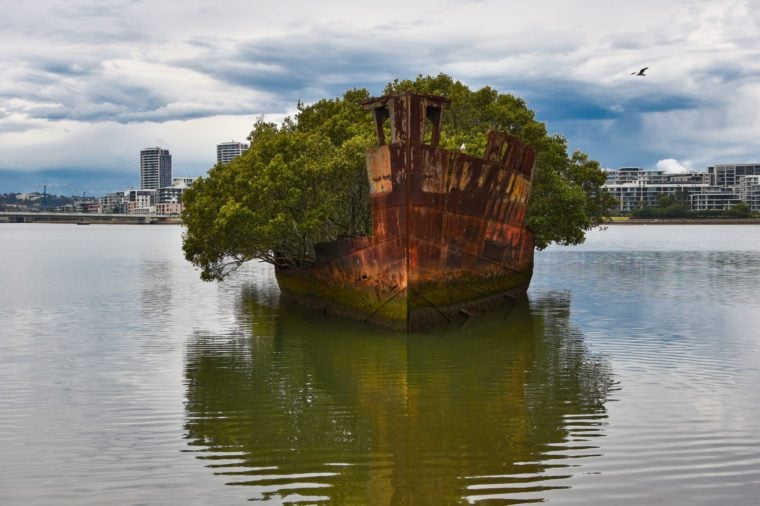 This is not your average shipwreck. The SS Ayrfield, built in 1911 and used as a supply ship during World War II, was left to rot where it was moored in Homebush Bay after being decommissioned in 1972, one of many wrecks in the bay. This industrial area was contaminated with toxic waste, but eventually cleaned up, revitalized for the 2000 Sydney Olympics, and now home to suburbs. But the ship had been reclaimed by mangrove trees, and so the “floating forest,” as it’s now known, was kept as it was—a strange juxtaposition of the man-made and the natural. Today, you can see still the ship from shore, an example of what happens when nature takes over abandoned places.