After This Man Rescued a Cow from a Dairy Farm, the Two Developed the Most Unbelievable Friendship

Meet Ryan and his 1,000-pound bestie: Jenna the cow. She's brought joy to his life—and also brought him together with his soon-to-be wife.

Editor’s Note: America’s Best Pet Pals is a nationwide search for the animal friendships that make you laugh, cry, and purr. Reader’s Digest will be honoring the best in pet friendship in print, online, and on social media. This is a finalist in our “People to Animals” category. Scroll to the bottom to cast your vote for Jenna and Ryan. To see our full list of finalists, go to rd.com/petpals and vote in each category.

On the edge of the city of Williamsburg, Virginia, resides Ryan Phillips and his very best friend, Jenna the cow, in just one of the many animal adoption stories that will warm your heart.

About two years ago, Ryan saw an ad for a newborn Holstein calf in North Carolina, just three hours from his home. After visiting a sanctuary in Maryland that rescues cows, Ryan’s suspicion that cows are just “grass puppies” was confirmed. Playful and full of curiosity, cows have many similarities to pets you may find in your home. Since Ryan was able to see firsthand just how amazing these creatures really are, he decided to take a leap of faith and drive his Subaru Forester over to Durham, North Carolina to bring home Jenna, his very first cow.

Jenna was born on a dairy farm with her twin brother. Since female Holstein calves with a twin brother typically have a high chance of being infertile, Jenna and her brother were spray painted and prepared for slaughter just days after their birth. Luckily, the dairy farmer’s daughter, Jenna, persuaded her father to find homes for these three-day-old calves instead of taking them to be killed. Jenna’s brother was taken to a different sanctuary before Ryan arrived in North Carolina, so Ryan took the one remaining calf wrapped in a blanket on the long drive home. Ryan named her Jenna after the dairy farmer’s daughter who saved her life.

RELATED: When the World Shut Down, This 9-Year-Old Created an Unlikely Bond With 6 Chickens 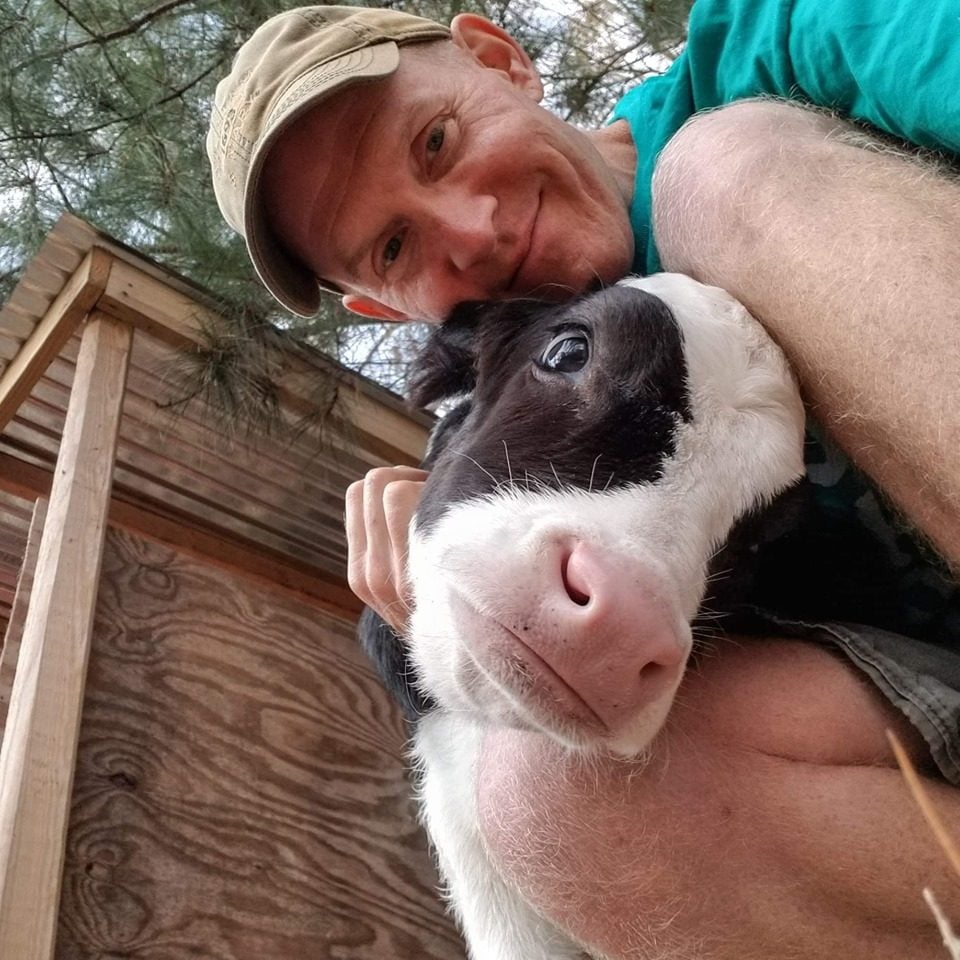 Since Jenna never had the opportunity to get to know her real mother, Ryan became the parental figure in Jenna’s life. He provided her with all the hugs, scratches, and attention that a baby needs. He found that Jenna would follow him from window to window around the house until he came outside to play with her. Describing Jenna as a “1,000-pound puppy,” Ryan says their favorite activity is to play chase. Jenna runs behind Ryan from tree to tree, followed by a game of headbutt in which they push their heads up against each other to see who can move the other first. Jenna always lets Ryan win.

“From that moment forward, Jenna became my best buddy,” said Ryan. “I fed her three bottles a day for 6 months and slept with her in the barn many nights to make sure she never felt lonely. Without her mother cow to pass her immunities through her milk, Jenna ended up being sick a lot in the first few months she was with me. I worried about her constantly as she lay sad and sickly with her head in my lap, with frequent vet visits to help her pull through.”

Because of how much time Ryan and Jenna have spent with one another, Jenna believes herself to be human. When another cow was rescued to live with Jenna, she hid behind Ryan and acted as if she didn’t know what to do. Eventually, she came around to having other cow friends, but she still loves Ryan most.

RELATED: A Bear Followed Me on a Camping Trip—And We Developed a Real Friendship 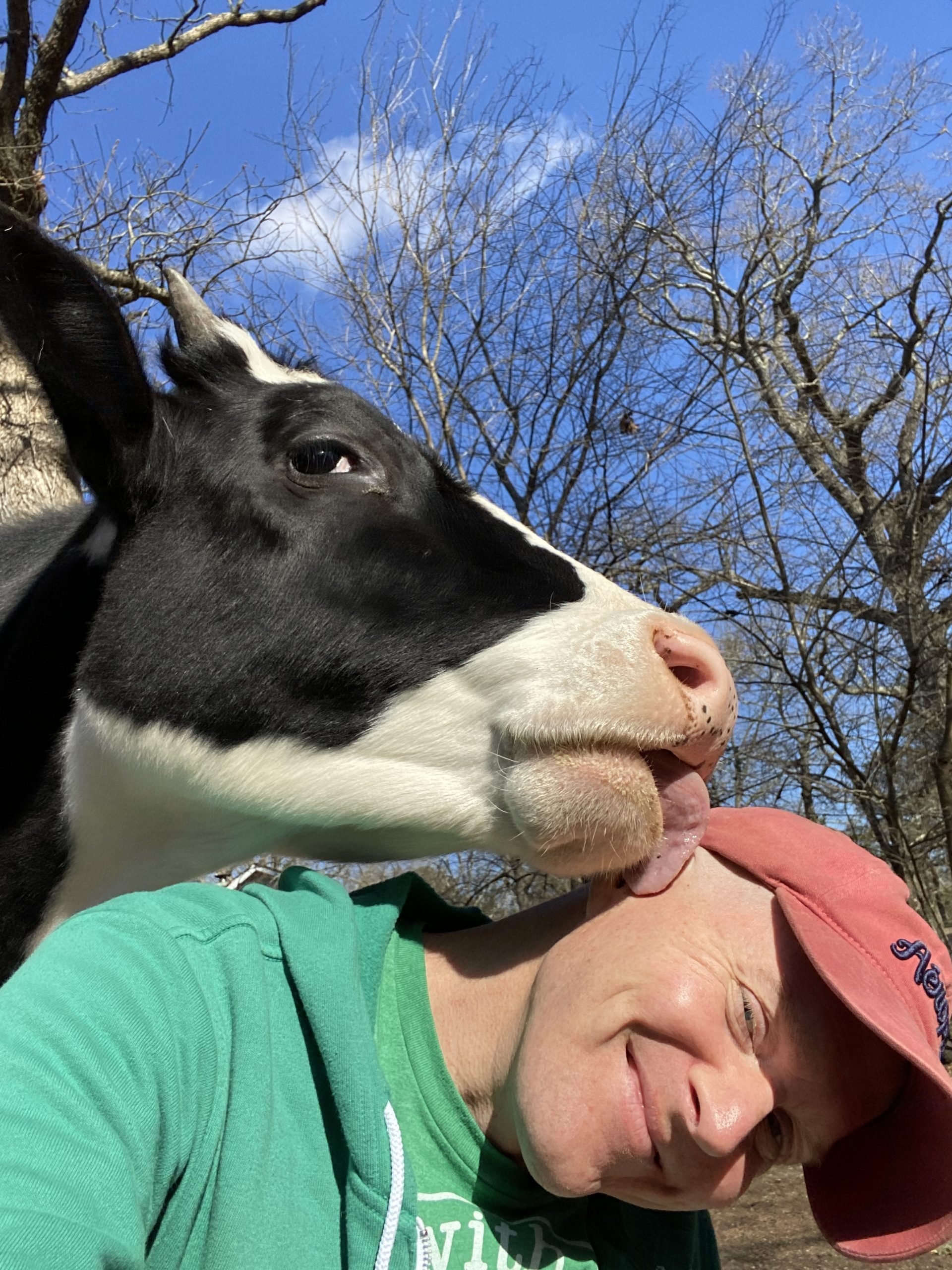 Meanwhile, across the country, a woman named Mallory, while perusing Facebook, watched in awe at the relationship between Ryan and Jenna through the videos he posted on his animal sanctuary page, Life With Pigs, a nonprofit that aims to give the animals at his sanctuary the care that they deserve.

Ryan began posting about saving a cow who had been abused on a farm, so Mallory reached out to Ryan hoping that she would be able to help, whether by getting the police to take the issue seriously or by calling animal control. Working on this project together allowed Ryan and Mallory to talk constantly, ultimately bringing them closer together. Mallory flew out to Virginia for a protest surrounding the animal abuse and met Ryan in person for the very first time. The two fell in love, Mallory moved out to Virginia, and the couple is getting married this month. Jenna will serve as Ryan’s “Best Cow.”

Although Jenna earned herself the nickname of “wingcow” after bringing the couple together, she became noticeably jealous of Mallory as she took away some of Ryan’s attention. The two have now developed a beautiful relationship, but ultimately Jenna is still a Daddy’s girl.

The couple currently has 23 animals together at the Life With Pigs sanctuary: two cows, three pigs, three turkeys, eight chickens, a parrot, a rabbit, two sheep, and three dogs.

While many of the animals get their rest in the barn outside, the three pigs have their very own loft bed above the couch where Ryan and Mallory unwind for the evening. The dogs reside on the couch, the parrot perches in the living room, and the rabbit runs around playing with everyone, the most social of the bunch.

RELATED: This Family Raised a Baby Goose for a Year—20 Years Later, It Returned Home 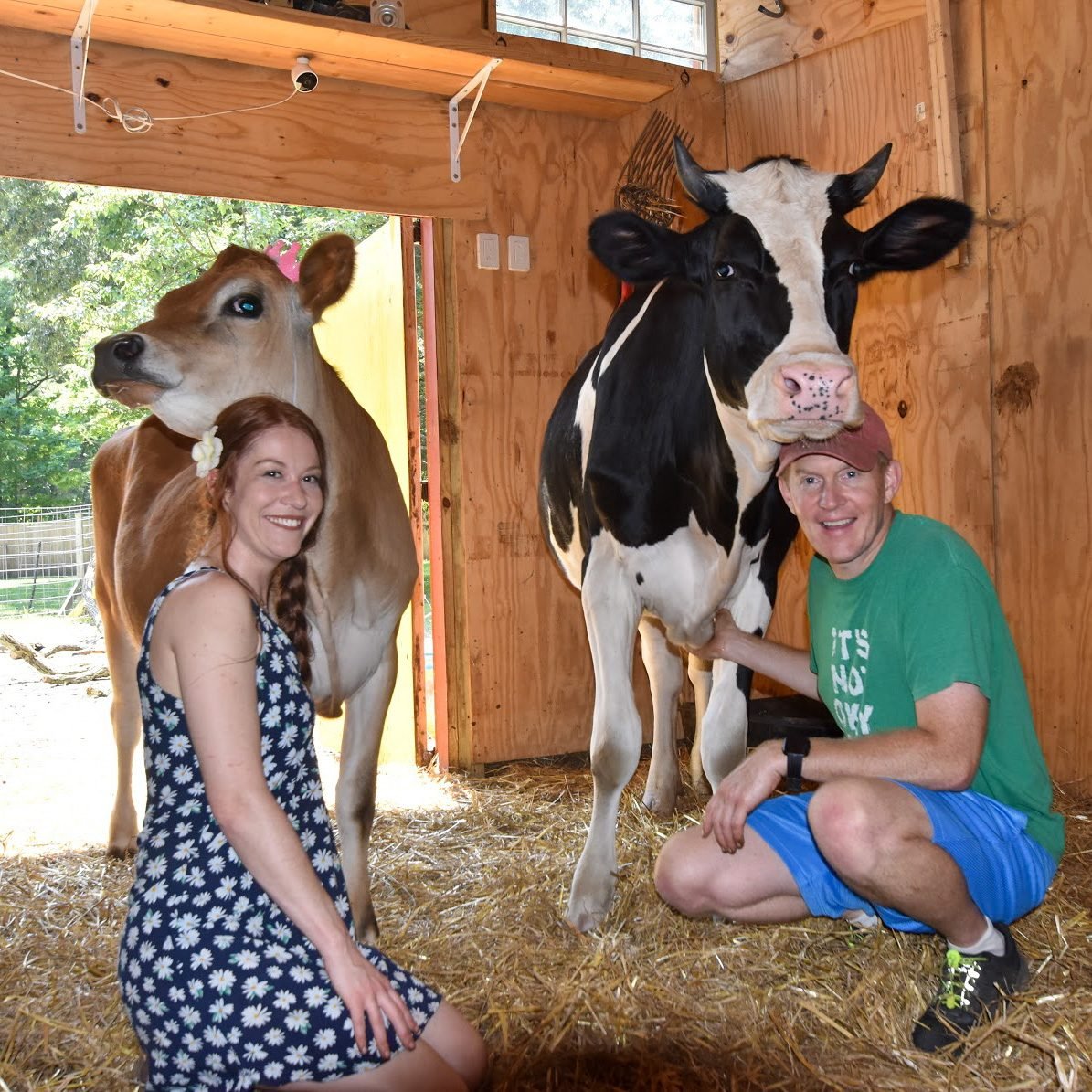 The makings of a beautiful family

Between 5 A.M. and 7 A.M. the pigs wake up Ryan by knocking over something in the living room, signaling that they are ready to go outside and start the day. Ryan spends his days tending to the animals at the sanctuary, while Mallory works her own full-time job remotely.

Jenna always wants to be included in everything Ryan does, whether that’s working in the yard or eating in the kitchen. When Jenna was a baby, Ryan would sometimes bring her into the house for a carrot treat, but now that Jenna doesn’t fit in the house, she gets her treats through the kitchen window, now playfully known as the “Carrot Drive-Thru.” Since her horns have grown and they don’t easily fit through the windows anymore, the window panel has to be removed for Jenna’s head to fit through. And when Jenna is done snacking, she likes to “help” Ryan put the window back in place.

“She’s part of the family, wanting to stick her head in windows and be involved in everything,” says Mallory.

Before the pandemic, Ryan would take Jenna for walks into town with her pink harness. People would do a double-take, but they learned very quickly that Jenna loves to meet new people. Ryan likes to tell them about her origins and how she was lucky enough to escape the dairy industry. He even gets to show off a new trick Jenna learned—shaking for alfalfa treats.

“A lot of people will drive past cows in a cow pasture and think that they are just giant animals that eat grass all day,” explains Ryan. “Jenna has all the qualities that we associate with dogs and especially that strong desire to be loved. She will let me hug her or she puts her head against my leg, and I’ll wrap my arms around her, which we will do for 20 minutes. The look on her face is utter contentment. The difference between a cow and a dog is just the size.”

Cows have a natural lifespan of around 20 or more years, but those in the animal agricultural system live between one day to around four or five years. They typically don’t receive the respect, compassion, and kindness as companion animals, even though they have similar cognitive abilities.

“When our former cow Winnie passed away unexpectedly due to some underlying health issues, Jenna was inconsolable,” explains Mallory. “She’s a very needy cow anyway, but she would moo by the window constantly and was so upset about losing her friend. We rescued our other cow Maisie soon after, and she and Jenna became best friends. They are very attached to their family and friends. People think that these are just large, dumb animals that only serve as food for us, but that is not the case.”

“So much of my life has changed due to Jenna coming into my life, but I wouldn’t have it any other way,” says Ryan. “She is truly my best friend and we couldn’t imagine life without each other. My goal is to give her the best happily-ever-after possible.”

You can follow the adventures of this sweet hybrid family on the Life With Pigs Facebook page, Instagram account, and website. And now that you’ve gushed over Ryan and Jenna, check out these adorable animal friendship pictures that will fill your heart with happiness.

The Dog Who Took Monarch Butterflies Under Her Wing

My Favorite Neighbor Was a Golden Retriever

The Therapy Miniature Horse With a Magic Touch

I Tried the Best Butt-Lifting Workout Shorts for Women
After a Woman Rescued an Injured Swan, Strangers Helped Her Get the Bird Across the City to a Rehab Center
How the Dog Nobody Wanted for 17 Months Became a School’s Unofficial Mascot