Martin Luther King, Jr. led the Civil Rights Movement in the United States from the mid-1950s until his death by assassination at age 39, in 1968. Though his life was short, his impact will always be with us. 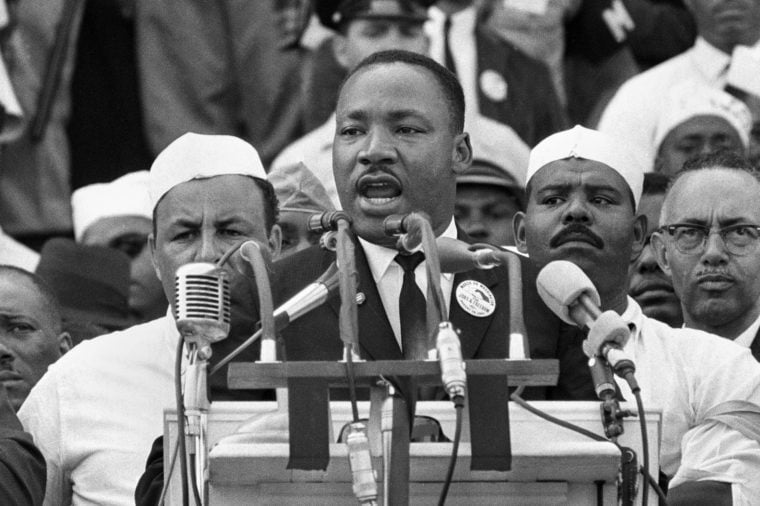 Although Martin Luther King Jr.’s life was tragically cut too short, he made a huge impact on the world and paved the way for future civil rights movements. The photos below offer a more intimate look at all of the amazing work he did. Learn about these Martin Luther King, Jr. “facts” that just aren’t true. 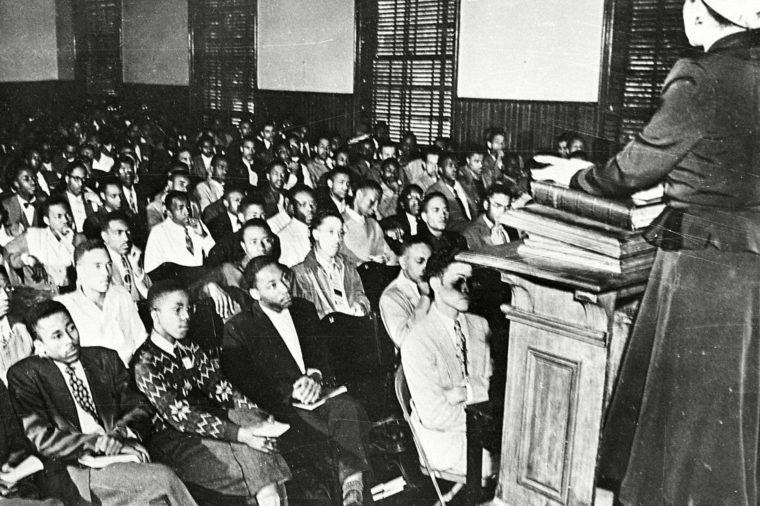 As a student at Morehouse College

Martin Luther King, Jr. was only 15 when he began classes at Morehouse College in 1944. Third from left in the front row, he’s pictured at a campus assembly in 1948, the year he graduated. It was at Morehouse that King honed his keen awareness of social and political issues and became inspired by Gandhi’s philosophy of nonviolence, which would later play an important role in King’s approach to social and political reform. Don’t miss these inspirational Martin Luther King, Jr. quotes. 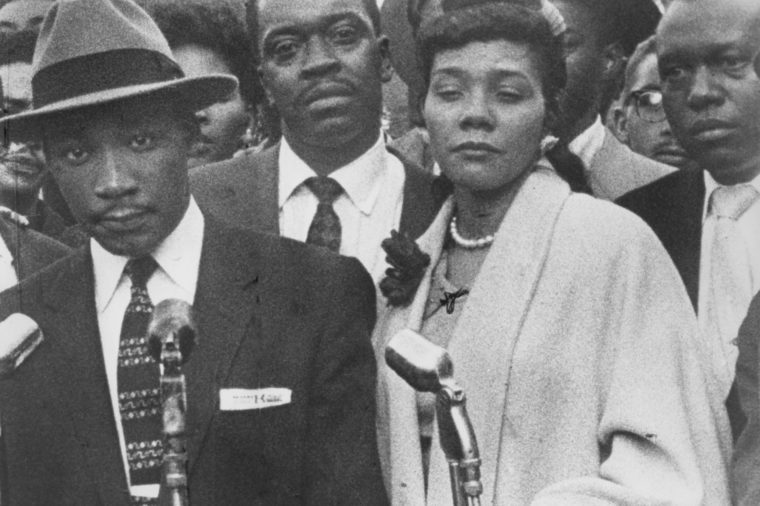 With his wife, Coretta

King met his wife Coretta Scott when he was studying for his doctorate at Boston University and she was studying music at the New England Conservatory. They married in 1953 and had four children. They’re pictured here in 1956 during the Montgomery Bus Boycott in Montgomery, Alabama, which was organized by King and several other local civil rights leaders to protest segregation, in particular on public transportation. Here’s why Black History Month should last all year.

King and the other boycott leaders were arrested for their role in the boycott. Here King is being booked by Montgomery’s police lieutenant. D.H. Lackey. King spent months in jail during the boycott but, through his efforts and those of his supporters, the country could no longer turn a blind eye to segregation and Jim Crow laws. Check out these great movies to watch in honor of Martin Luther King, Jr. 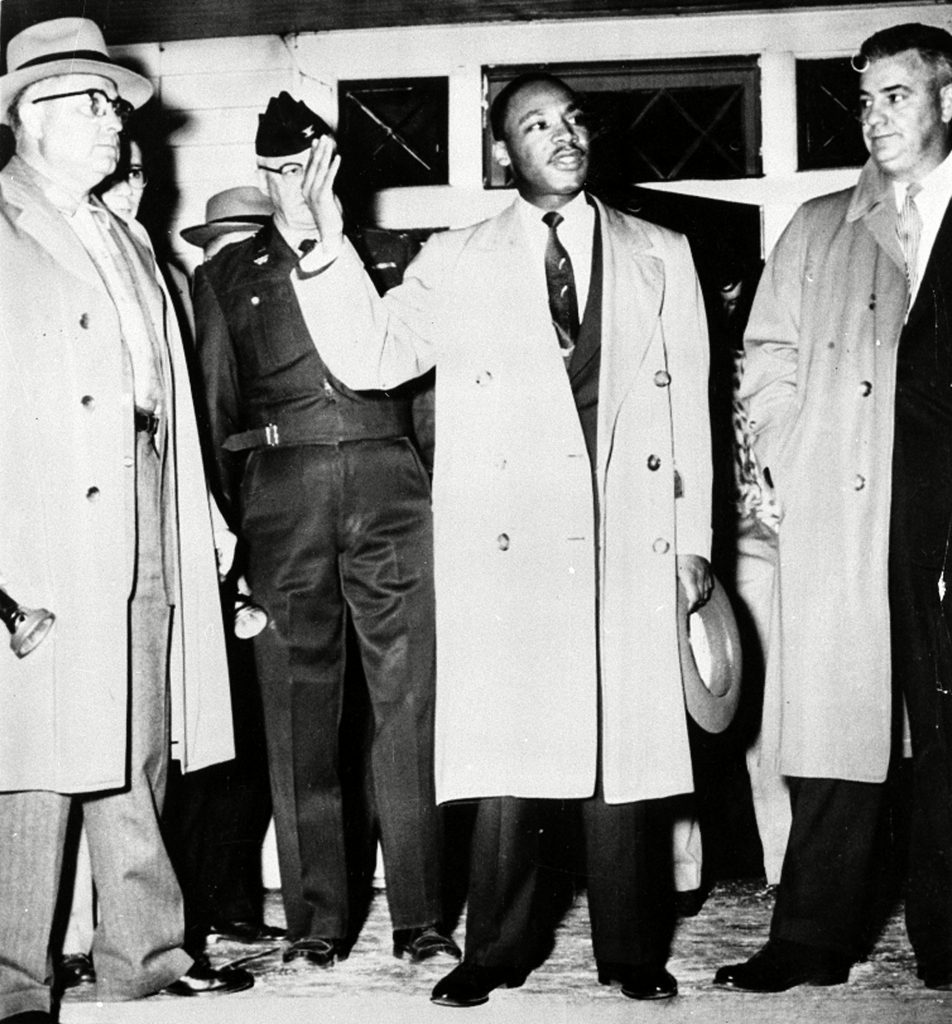 During the Montgomery Bus Boycott, King’s house was firebombed by resentful neighbors. Here he’s addressing a crowd from his front porch after the bombing, urging them not to resort to violence and to remain calm as they peacefully resisted segregation. Fast forward to today: this boy was excluded because he was black–this was the reaction of his friends. 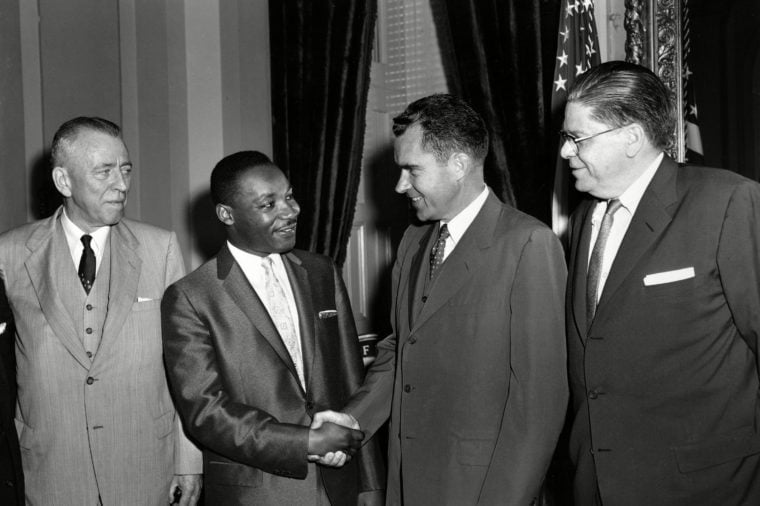 King had a complicated relationship with Richard Nixon, according to Stanford University’s King Institute. Initially, King was unimpressed with Nixon’s interest in—and commitment to—civil rights matters, but he later warmed to Nixon after two meetings in 1957, one of which is pictured here. His feelings changed again when Nixon failed to come to his defense after King was arrested for his participation in a sit-in in Atlanta in 1960. Here are some facts about Black History Month that you didn’t learn in school. 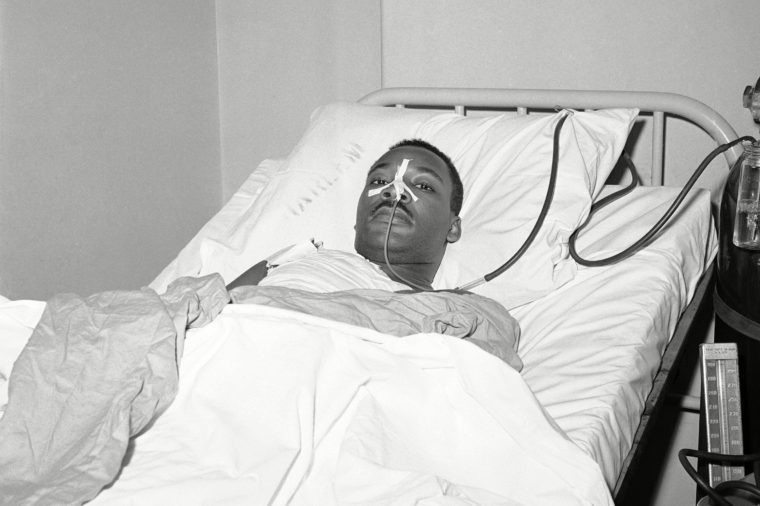 Hospitalized after surviving an assault in 1958

King was in critical condition at New York’s Harlem Hospital following an attack at a book signing in which a mentally ill woman stabbed him with a steel letter opener. King bore no ill will toward his attacker and addressed the attack in his “I’ve Been to The Mountaintop” speech on April 3, 1968, which he gave the day before he was assassinated. Learn about how MLK’s birthday became a holiday. 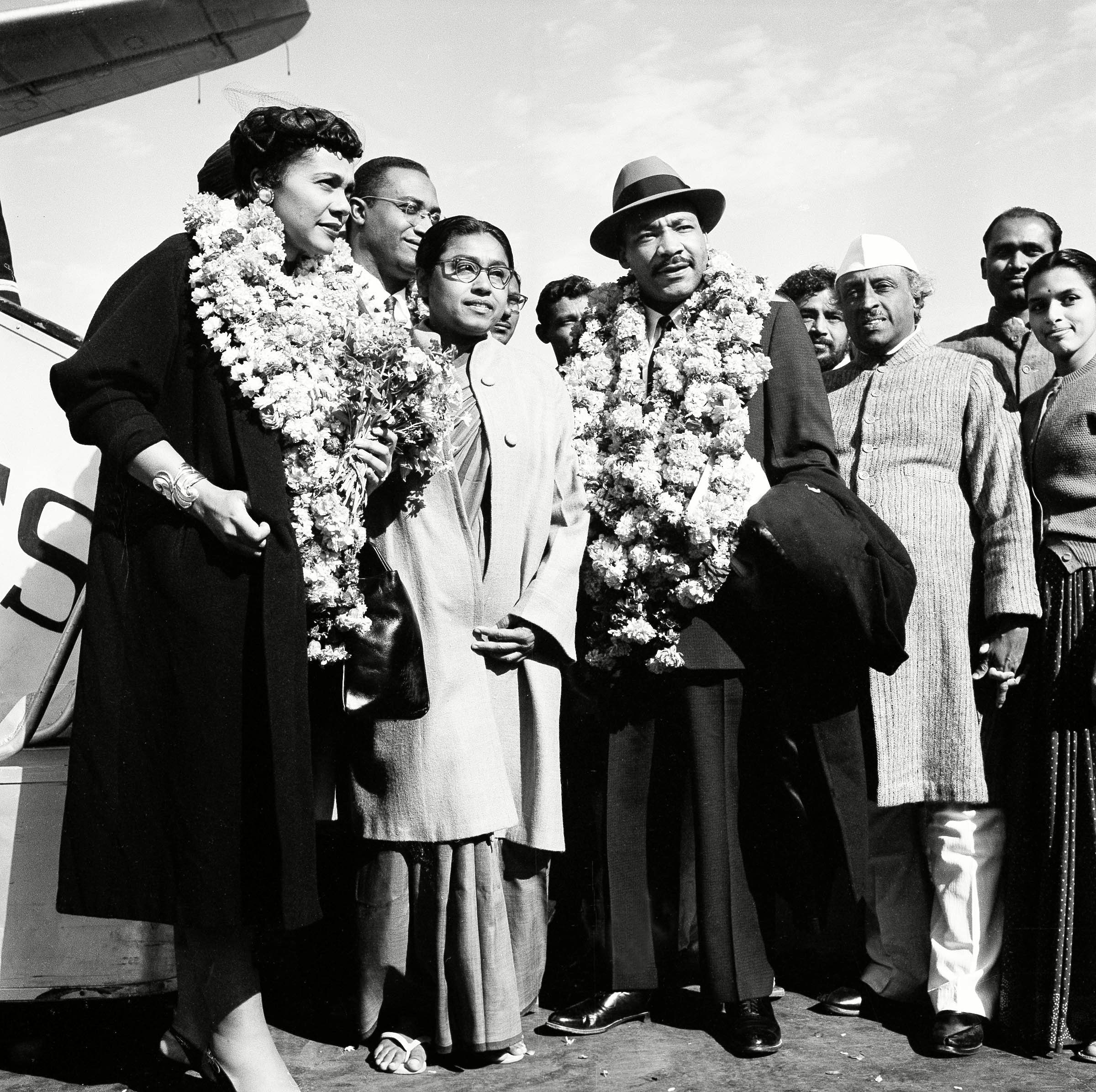 King, who was sometimes referred to as “America’s Gandi,” described Mahatma Gandi as “the guiding light of our technique of nonviolent social change,” according to Stanford University. To the group of reporters gathered at the airport, King, pictured here with his entourage, said, “To other countries, I may go as a tourist, but to India, I come as a pilgrim.” These “facts” about the civil rights movement just aren’t true. 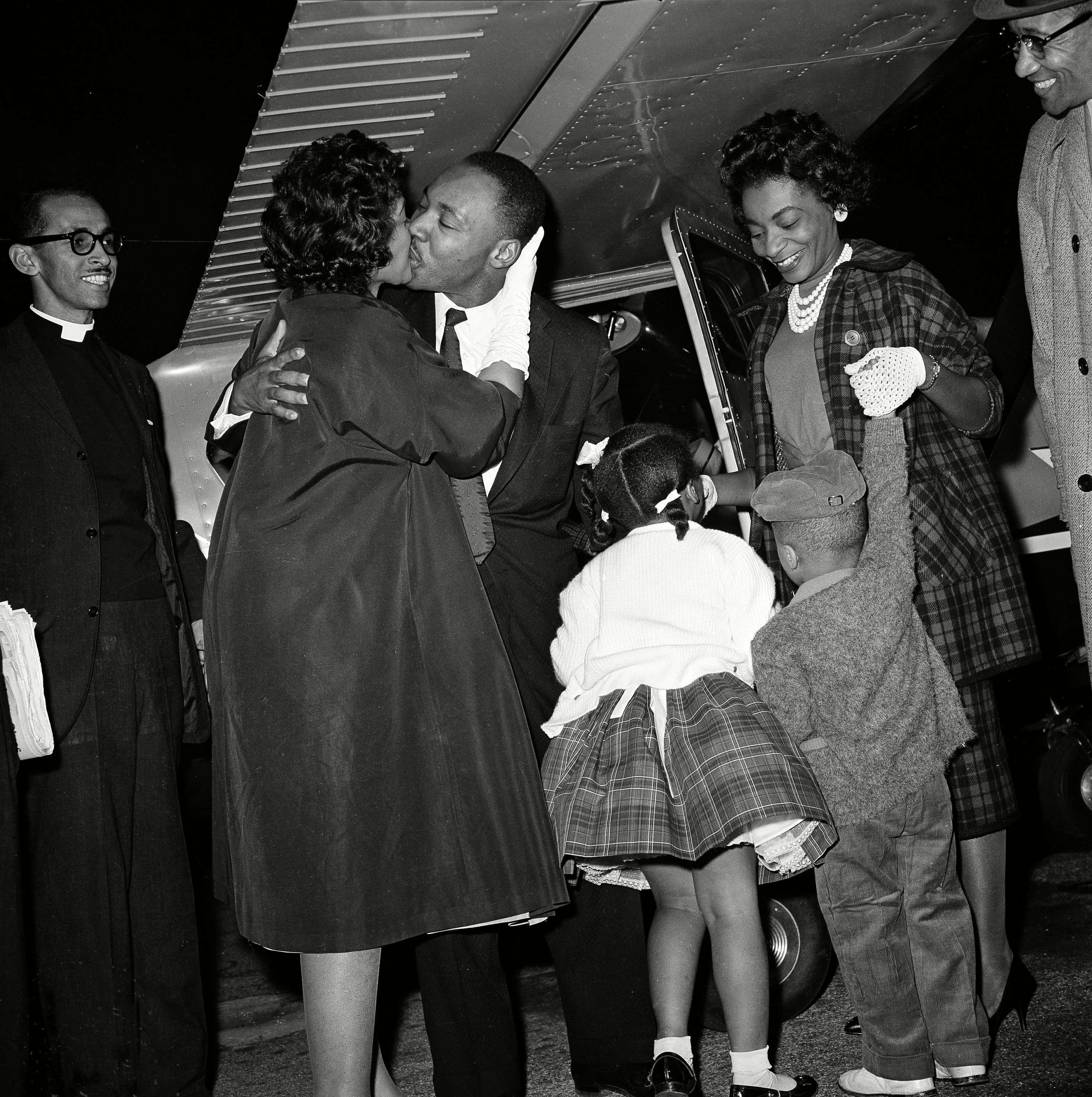 A pivotal moment for both King and JFK

On February 1, 1960, students organized a sit-in at a racially segregated Woolworth’s in Greensboro, North Carolina. King, who described the student sit-in campaigns of 1960 as an “electrifying movement,” joined in an Atlanta department store sit-in in October. King was arrested and sentenced to prison. Presidential hopeful John F. Kennedy helped secure King’s release which quite possibly also secured Kennedy’s presidency. 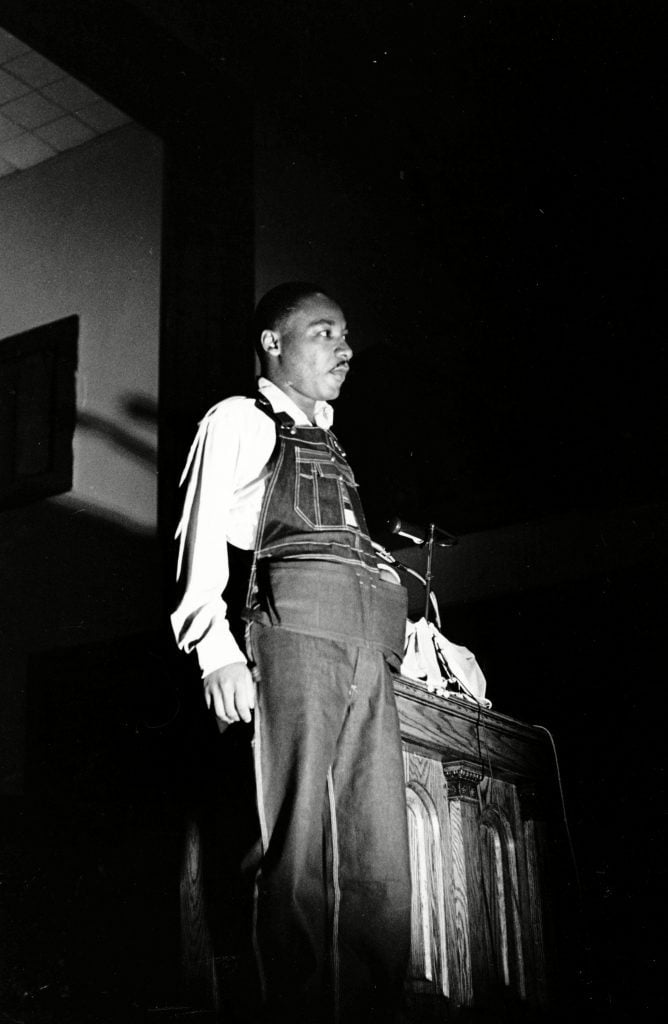 In April 1963, King helped lead an anti-segregation protest in Birmingham, Alabama—a non-violent one, of course, and it included church kneel-ins as well as regular sit-ins and a march on the county building to register black voters. He’s pictured here on April 6, asking supporters to join him in wearing overalls until Easter as part of the protest. The denim work clothes were once considered sharecropper wear; King wore the coveralls to symbolize of how little progress had been made since Reconstruction. On April 12, King was arrested and kept in solitary confinement; his jailers refused his request to speak with his wife—she had just delivered their fourth child—until President Kennedy intervened. 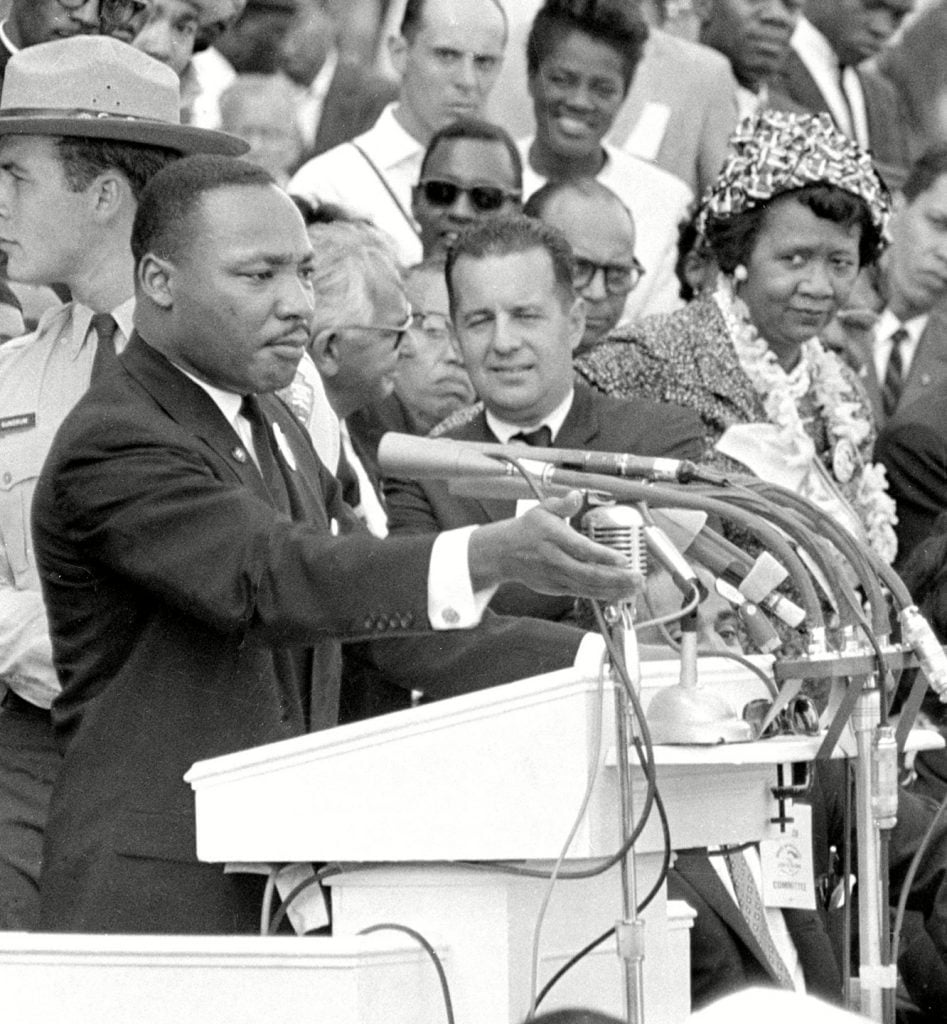 On August 28, 1963, during the March on Washington (the full title was the March on Washington for Jobs and Freedom), King gave his famous, “I Have a Dream” speech at the Lincoln Memorial. He urged America to “make real the promises of democracy.” He’s shown here giving that speech before thousands of civil rights supporters. Here are 13 world-changing ideas that came from real-life dreams. 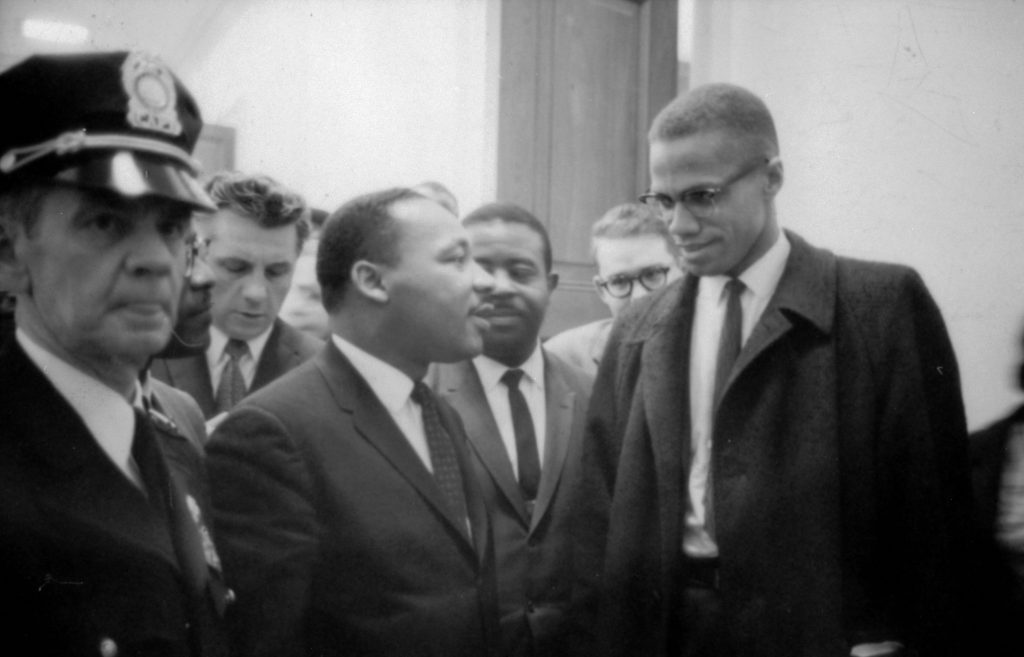 While King protested segregation through non-violent means, another civil rights leader, Malcolm X (formerly, Malcolm Little) advocated racial separatism through any means necessary. The two met only once in Washington, DC, at a press conference on March 26, 1964, pictured here. At the end of the conference, King shook Malcolm X’s hand in an offer of “kindness and reconciliation.” Read about 24 real-life instances in which an act of kindness changed the course of someone’s life. 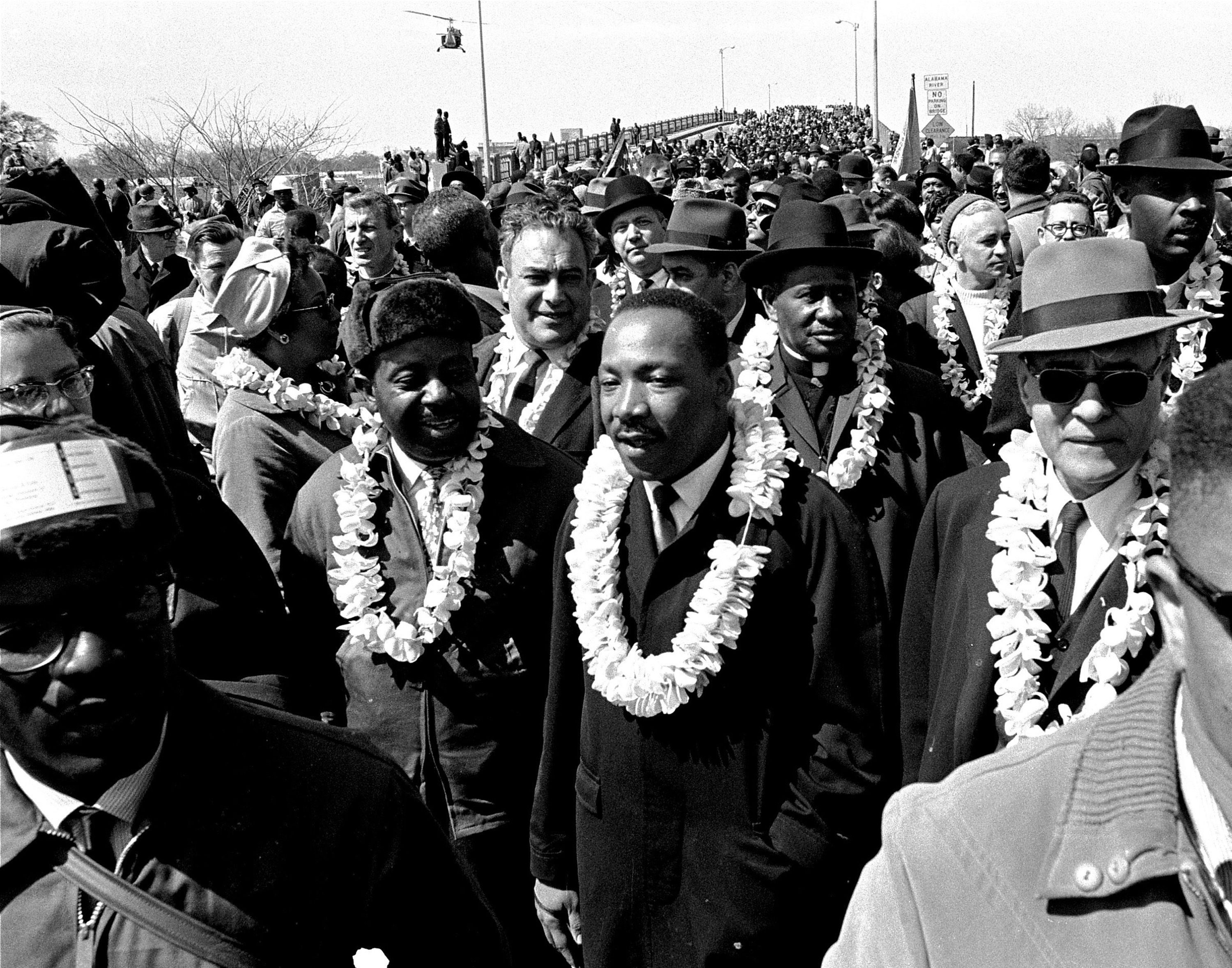 King led a five-day, 54-mile march from Selma to Montgomery, Alabama in March 1965 to protest Bloody Sunday, during which non-violent supporters of voting rights reform were beaten and otherwise assaulted by law enforcement. The march also addressed voting rights reform, and it helped prompt Congress to pass the Voting Rights Act, which gave guaranteed African-Americans access to the polls and ended all-white rule in the South. 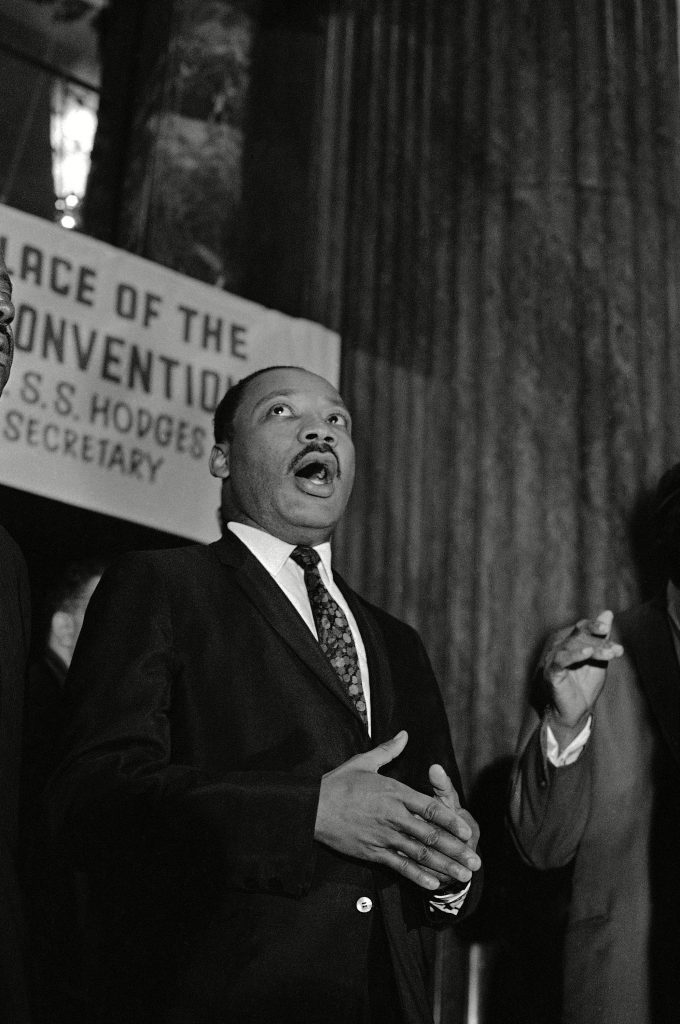 King is pictured singing “We Shall Overcome” at the national convention of the Progressive National Baptist Convention in Cincinnati, Ohio on Sept. 8, 1967. The 1.5 million-member Baptist group was founded in Cincinnati in 1961 by African-American church members seeking to create a religious movement that would support King’s advocacy of civil rights. Here are 12 ways to commemorate Black History Month. 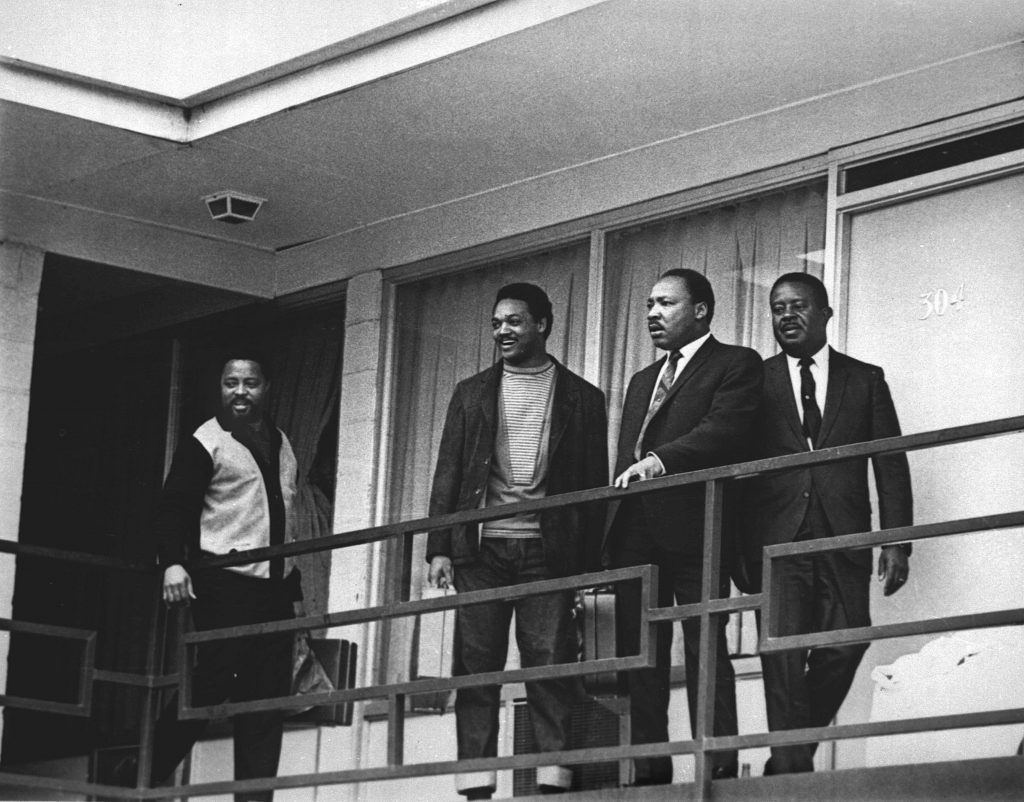 On April 4, 1968, King was killed by a single rifle shot as he stood on the balcony of the Lorraine Hotel in Memphis, Tennessee. He’s pictured here on April 3 on that very balcony, preparing for the next day’s speech with two other civil rights leaders—Hosea Williams and Ralph Abernathy. James Earl Ray was convicted for the murder of King, but not everyone’s convinced it was Ray, or if it was, that Ray acted alone. Next, find out more about the conspiracy theories surrounding King’s death.