The moral of the story: Know when to splurge and when to save.

Lifestyles of the rich and frugal

When we envision “lifestyles of the rich and famous,” luxurious mansions, exotic sports cars, designer clothes, and sparkling jewels come to mind. The super rich are often cast in a self-indulgent light as people who only shop at the finest stores, throw cash around like it’s Monopoly money, and wouldn’t be caught dead at a big-box store, while the rest of us scour the aisles of Target for a few dollars off on toilet paper. But this isn’t the case. In fact, the person standing next to you, price-comparing different packages of toilet paper, might actually be a multimillionaire.

According to a survey of 1,200 ultra-high-net-worth investors released by the financial information site Millionaire Corner, a third of people with a net worth of more than $5 million say they shop at Walmart, while half shop at Costco and more than 40 percent head to Target. It makes sense when you think about it—they’re wealthy for a reason, and one of those reasons may be that they’re smart shoppers. So, what do rich people refuse to overspend on? Read on to find out.

Gone are the days when the super rich spent their hard-earned cash on silk sheet sets. Today’s millionaires realize that a set of high-quality bedding doesn’t have to cost a fortune. “Welcome to 2020 where you don’t have to spend thousands of dollars or travel to Florence to get handcrafted, luxury Italian sheets,” explains Rana Argenio, founder of the direct-to-consumer luxury bedding line 10 Grove. “Even rich people have figured this out and are opting for a more accessible and sustainable option.” She launched her company in 2019 to give a broader audience access to the quality, comfort, and style of luxury Italian brands—for a fraction of the price. So, instead of dropping $1,000 on sheets, you can get a luxury set for around $200. But before you pull the trigger, you should know these 9 things about buying new bed sheets.

Mercedes, Rolls-Royce, Lamborghini, and Ferrari. Those are the first cars that anyone who has a net worth in the millions splurges on, right? Nope. According to research from Edmunds.com in 2016, the most popular car among those with incomes over $250,000 a year was the Ford F-Series, followed by the Jeep Grand Cherokee and the Jeep Wrangler. The Lexus RX and BMW X5 came in fourth and fifth on the list!

“There will always be an interest in and market for high-end exotic vehicles,” explained Edmunds.com executive director of industry analysis Jessica Caldwell when the study was released. “But, overall, most of the wealthiest Americans look for their vehicles to perform the same kind of functional tasks that everyone else does.” According to Business Insider, Warren Buffett drives a Cadillac XTS, which retails for around $45,000, while Mark Zuckerberg prefers a $30,000 Acura TSX because it’s “safe, comfortable and not ostentatious.”

By the way, did you know you can buy cars through Sam’s Club and Costco? If you don’t feel like bargaining with a dealership, look into services offered by your local warehouse to save you time and money. And just FYI, these are the best car deals under $18,000.

Sure, you can spend oodles on a fancy, designer lip moisturizer—but why do that when you can get something great for a whole lot less? Khloe Kardashian, Julia Roberts, and Zendaya might splurge on expensive makeup, but when it comes to healing ointment, they opt for a much thriftier option. Aquaphor, the dermatologist-recommended and celebrity-endorsed lip treatment, can be used on anything from dry lips to cracked skin, and it costs a fraction of the price of luxury alternatives. To save even more money, you can buy it in bulk. This $10 cream is also reportedly Meghan Markle’s skin-care secret. 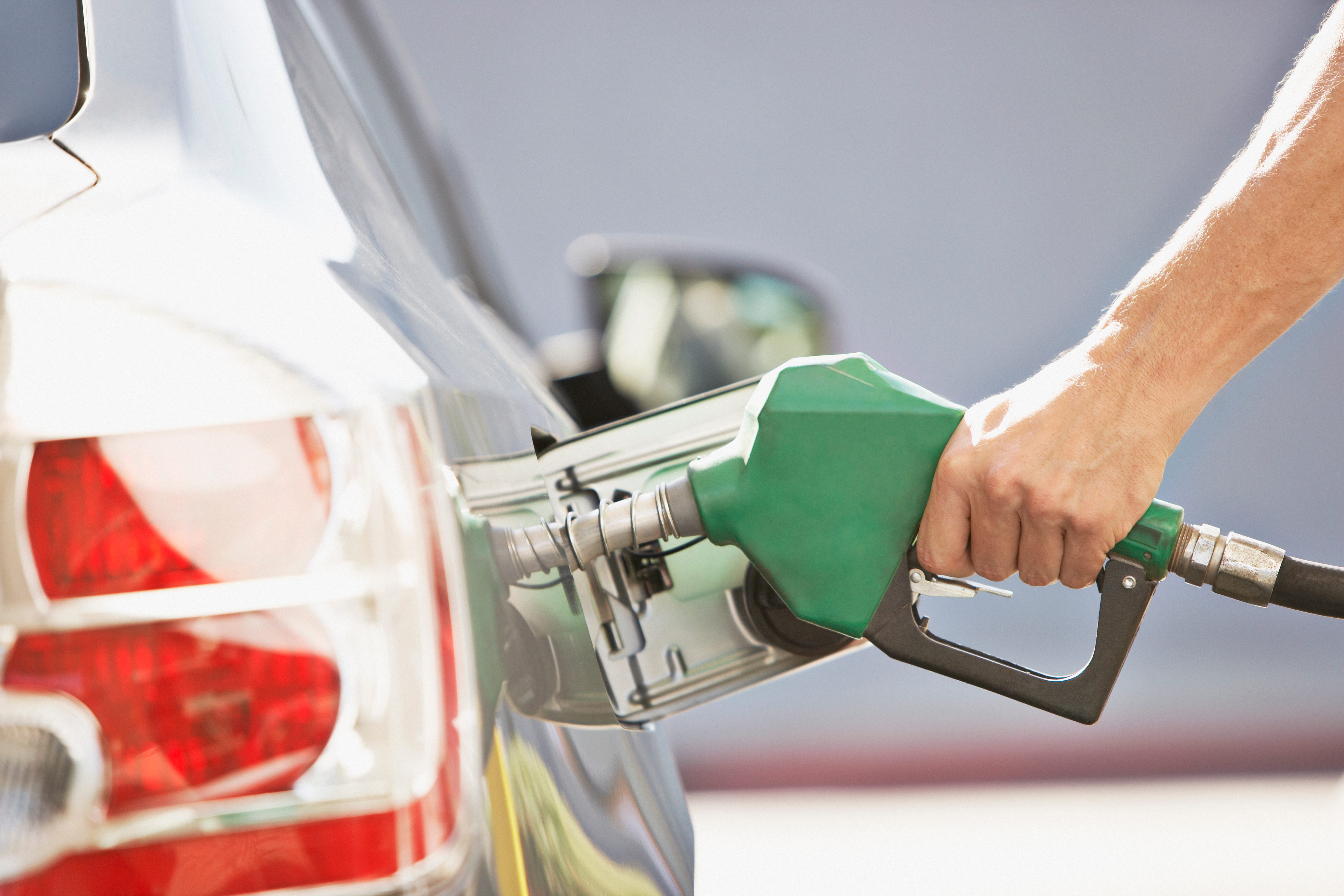 Even though the point-oh-one percent can afford to buy the fastest, most luxurious cars imaginable, when it comes to keeping them fueled up, they tend to be on the frugal side. “Your rich friends might drive a fancy car, but that doesn’t mean they are willing to pay high gas prices if there are better prices nearby,” explains Trae Bodge, a smart shopping expert at TrueTrae.com. Apps like GasBuddy and Gas Guru are great online resources to find the cheapest gas wherever you are, allowing you to comparison-shop.

Buying beautiful wrapping paper, gift bags, and cards can easily cost as much as a gift itself. However, if you want to give like a rich person, you might as well stop shopping for designer gift packaging and head to the dollar store instead. “I find that wealthy folks don’t like to spend a lot of things are disposable, and gift wrap and gift bags fall into that category,” says Bodge. “Your rich friend might buy you a lovely gift, but the gift bag could very well be from the dollar store.” Other great places to shop for cheap but chic gift packaging include wholesale warehouses and Amazon. Or you can try one of these creative hacks to wrap a gift without wrapping paper.

Sure, the super rich might have top-of-the-line electronics in their homes, but that doesn’t mean they are paying top dollar for them. Just like us, they don’t want to overpay for things like computers, televisions, and smart gadgets. Don’t believe us? Facebook founder Mark Zuckerberg and his wife, Priscilla Chan, who are worth nearly $80 billion, were recently photographed shopping for a flat-screen TV at their local Costco. Have you ever wondered which is cheaper: Costco or Sam’s Club? We’ve got the answer!

It can be tempting to splurge on fancy household essentials such as toilet paper, cleaning supplies, or laundry-room products, but the one percent isn’t wasting their money on this stuff. “If you’re rich, you’re probably busy,” says Bodge. In fact, many rich people do their shopping at places like Costco or Target— even Beyoncé! “Buying household items in bulk from a wholesale warehouse is a great way to save money and time.” It doesn’t hurt that super rich people have plenty of room to store their bulk purchases inside of their huge mansions. Here are more things you should always buy at Target.

“The wealthy may be able to afford to travel just about anywhere, but that doesn’t mean that they’re not looking for ways to save,” says Bodge. In fact, many of them use the same online search tools we do to find their next travel deal—such as Expedia and Hotels.com—and some even opt to fly coach over first class to save even more. Some examples include Blake Lively, Brad Pitt, Jessica Alba, and even Prince William, the future king of England!

Even people who adore Cartier, Tiffany, and Rolex likely have a few frugal finds mixed in with their stash. “I’ve been a celebrity stylist and personal shopper for 19 years now, and one thing I’ve noticed that many of my female clients who are more than comfortable financially buy cheap is costume jewelry,” reveals Lauren Rae Levy. “They’ll buy it and make it look real by mixing it in with their authentic pieces. Sometimes the costume jewelry photographs even nicer than the real deal!” Here’s how to perfectly accessorize your outfit, according to fashion stylists.

Just because they can afford Chanel, Dior, and Tom Ford sunglasses, it doesn’t mean that’s what the extremely rich are wearing. “Designers are charging more and more for fun sunglasses each year, but sunglasses are one of the most commonly broken and misplaced items one can have,” explains Levy. In fact, she maintains that many folks are now buying stylish but cheap sunglasses on the streets and in stores like H&M, rather than the expensive designers. “Some of my wealthier clients tend to buy one to three pairs of new designer sunnies that they love per year, then fill the rest of their collection with fun pairs that look almost exactly the same but cost a fraction of the price,” she says.

For example, a popular item with many of her clients are these Gucci-inspired crystal shades from Amazon. The authentic ones will set you back more than $750, while these dupes retail for under $15. “It’s super hard to tell the difference,” Levy adds, “and when the shades are so fab and fun, who really cares where they came from!”

“Designer-makeup costs add up, and considering you need to replace certain items often for cleanliness reasons, the first item I see my wealthy clients cut from the designer list is mascara,” says Levy. Instead of completing their makeup kits with YSL, NARS, or Chanel mascara, many of her clients shop for mascara at the drugstore, opting for brands such as Maybelline and CoverGirl. “The truth is, with daily mascara, I don’t see the difference,” she adds. These are the 9 best drugstore mascaras for your longest lashes ever.

Levy’s clients love filling their homes with candles, but they often opt for thrifty picks. “I’ve noticed a lot of my wealthier clients buying candles in bulk at stores like Home Goods and Marshall’s and putting them away to use throughout the year,” she says. “Everyone used to spend so much on their name-brand candles, but now I’ve noticed they love getting a good buy on candles and buying them in bulk.” They may invest in one or two more expensive candles to have when company is over, but “the rest of the time, the great scents for less are good enough to get the job done!”

Celebrity stylist Amber Alexandria dishes that her wealthy male clients tend to buy less expensive products when it comes to everything from shampoo and body wash to aftershave. “Whatever smells the best down the Target aisle is usually what they opt for,” she says. Many of them even purchase them in bulk in warehouse stores such as Costco and Sam’s Club. “Making a trip to Costco once every few months saves time and is convenient, and as long as they smell good and get the job done, they really don’t care where these products come from,” she explains.

While Alexandria’s wealthy clients may invest in pricey wardrobe staples that will last a lifetime, when it comes to super trendy items, she advises them not to overspend. “If a client wants to buy into a trend every once in a while, we go with affordable brands and designers, as the life span of a trend is limited,” she explains. Not convinced? Just look at the popularity of the famous Orolay coat from Amazon, which influencers, fashion insiders, and other high-profile “it” girls have been rocking relentlessly over the last year. The budget-friendly coat grabbed major headlines and rave reviews, and it costs a fraction of the price of department-store coats. Here’s more on why this coat has thousands of 5-star reviews on Amazon.

Leah Groth
Leah is a Philadelphia-based writer, editor, mother and product junkie. Her obsessions include old houses, home design, fashion, beauty, books and anything that makes her life — which includes working full-time and taking care of two "spirited" children and a Vizsla puppy — a little bit easier. Her work has appeared on a variety of publications and websites, including Glamour, Prevention, Business Insider, Livestrong, Mindbodygreen, Fatherly, Scary Mommy, Wonderwall and Cosmopolitan.