The film holds a special place in many people's hearts, but its place in my heart also includes my dad.

My dad and I have always had a good relationship. He was the one who would let me experiment in the kitchen, the one who would travel to Orlando, Florida, with me for day trips to the Walt Disney World theme parks. He would even sit back in his recliner and watch a movie with me late at night. Usually those movies were something from Disney, and those nights were always great. But when we started watching the Star Wars saga, everything changed.

My dad was introduced to the Star Wars universe when his grandpa took him to see A New Hope back in 1977, when it first came out in theaters and it was still only called Star Wars. Fast forward more than 35 years later and my dad was taking me to see my first Star Wars film, The Force Awakens when I was in my mid-20s. I had no idea that this franchise would become such a huge part of my life and help me become even closer to my dad.

It all began with Episode VII

I have to admit, growing up, I’d never really been interested in Star Wars. In fact, I’d never even seen any of the films. The old-school graphics of the original movies seemed dull, and I felt that I already knew the main parts of the story, thanks to my love of the Disney parks and riding Star Tours at Hollywood Studios. That changed when my dad and I saw a preview for The Force Awakens in early 2015. I was intrigued, and my dad was, too—I could see that little twinkle in his eye he gets when he’s excited about something.

Courtesy Megan duBoisWhen I told my dad I wanted to go see the movie with him, he started telling me about his love of the franchise, stories of waiting to see A New Hope with his grandpa, and memories he’s had locked away in the back of his mind waiting for this exact moment. We made a date to go see the film, and the anticipation was mounting as our movie date day drew nearer. This was his turn to pass down something he had loved as a child to his own child.

The film was finally released that December, and sitting next to each other in the theater—popcorn and drinks in hand—we laughed through parts with BB-8 and Rey, cheered when Finn defected from the First Order and gasped when Kylo Ren stared at a crumpled-up mask that once belonged to his grandfather, Darth Vader. By the time the movie was over, I was hooked. I spent the majority of the car ride back home asking my dad all sorts of questions about characters and plots from the previous films. We made a plan to watch the other six films in order at home so I could figure out more of this expanding universe.

If you’re a true fan, you won’t want to miss these 25 mind-blowing behind-the-scenes Star Wars facts.

Watching the movies wasn’t enough. In our Star Wars giddiness, my dad and I decided to start a new annual tradition called Epic Star Wars Day. On this day, usually at the beginning of the year, we drive the two hours from our house to Walt Disney World and do everything there is to do related to Star Wars at the parks and resorts.

When we did this for the first time in 2016, Star Wars: Galaxy’s Edge was still three years away from opening. So, part of our first Epic Star Wars Day was spent at Disney Springs, where we ate lunch at one of our favorite restaurants, then headed to the VOID. There, we literally stepped into Star Wars by wearing a virtual-reality helmet and a specialized vest and carrying a blaster to complete a mission with K-2SO and Cassian Andor from Rogue One. After our mission, my dad couldn’t stop talking about it. 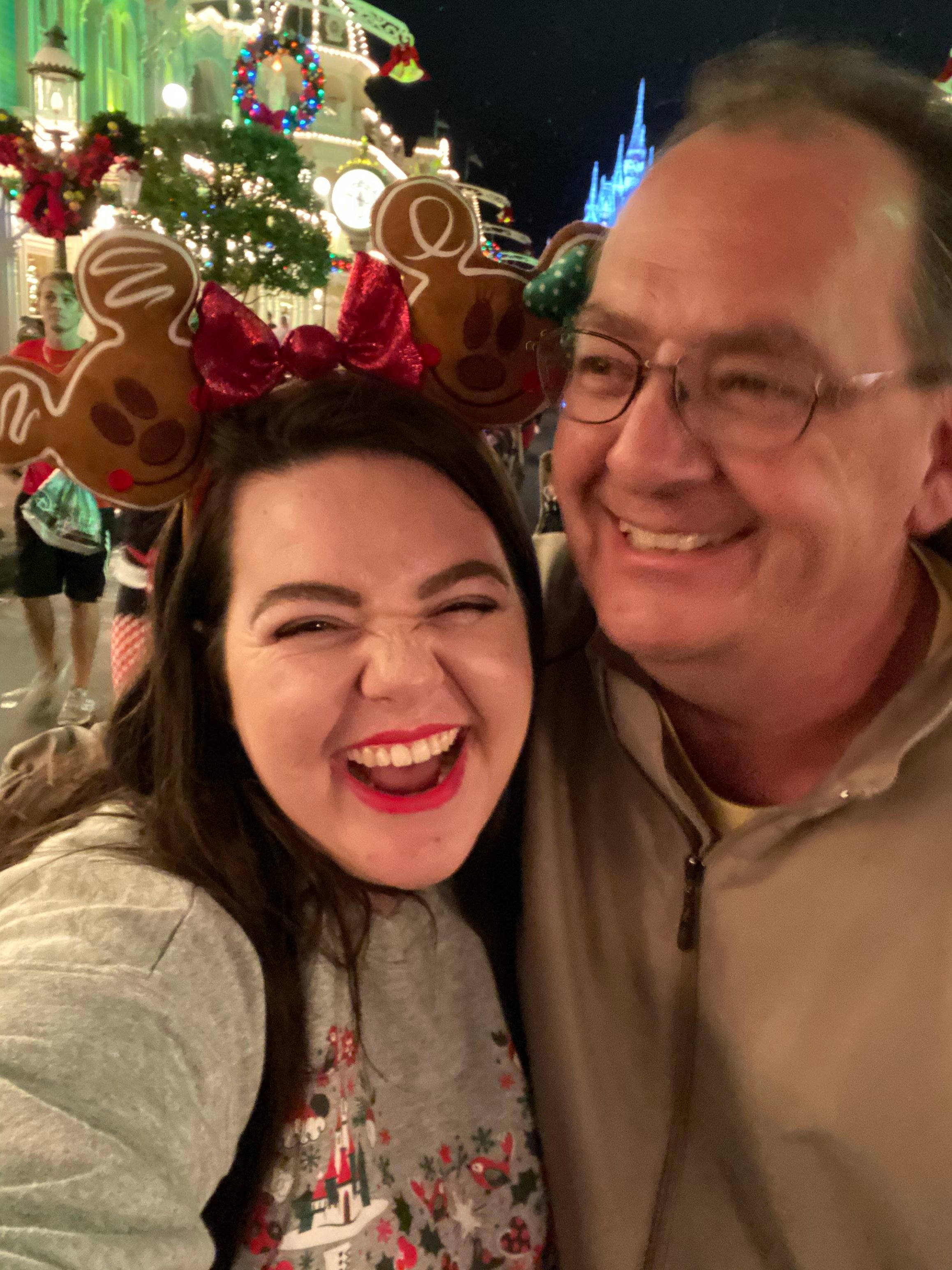 The rest of the day was filled with going on Hollywood Studios’ Star Tours ride and looking around the Star Wars Launch Bay, where we waited in line to meet Chewbacca, Kylo Ren, trade with Jawas, and marvel at some of the costumes and props from the Star Wars films. Once our Epic Star Wars Day was over, we hopped in the car to head home and started planning how we could make the next one even better. Little did we know then what Star Wars: Galaxy’s Edge would eventually have in store for us.

As a theme-park journalist, I got a sneak peek of Star Wars: Galaxy’s Edge before it officially opened to guests in August 2019, and I couldn’t wait to show it to my dad. On the big day, my dad’s excitement was palpable. He was already smiling from ear to ear when we walked through the passageway, heard the official John Williams score, and turned the corner to see a full-size X-Wing. Then we crossed the entire land to start out where most good Star Wars stories start: on the Millennium Falcon.

While in line for Millennium Falcon: Smugglers Run, I told my dad that it was highly unlikely that we would be getting the prized role of the pilot on the ride…but what I didn’t tell him was that I had an idea for how to increase our odds of making that happen. When we got to the front of the line, I said this to the Disney employee: “I heard Hondo is looking for a few new pilots. Well, I brought my dad, who used to fly helicopters in the Navy back on Earth. He’s the most skilled pilot in this group of nerfherders, and I know he would bring in quite a few credits for Hondo. We could split the glory with you since you assigned us as pilot.” Believe it or not, it worked! Moments later, we were handed two pilot cards, and my dad was getting ready to pull us into light speed as I shouted, “Punch it, Dad!”

Once we got off the attraction, we headed where all good pilots go to celebrate a job well done: the cantina.

Taking a theme and running with it

We’ve planned tons of special Star Wars moments over the last few years, including a Star Wars Day at Sea on a Disney cruise to celebrate my dad’s birthday last year. But one of my all-time favorite things to do with my dad is the Star Wars 5K run at Disney World. We ran our first one three years ago, and we haven’t looked back.
Courtesy Megan duBois

On the morning of the run, we had to wake up early. We were up no later than 3:30 to drive to the start line in costumes I had painstakingly worked on for a month. My favorite was probably when my dad dressed up as General Orson Krennic, and I was Kylo Ren. The dark side of the Force was definitely with us that morning as we crossed the finish line.

By far the best part of the race was simply the time I got to spend with my dad. As we walked through the park with the sun just starting to peek over the horizon, we were laughing and joking around, waving lightsabers as if we were actual Jedis. The moment we crossed the finish line was when I got the most emotional because I cherished the memories we just made walking 3.2 miles. The gratitude for the memory was a sentiment I’m sure my dad shared, too. Our race has been canceled this year due to the coronavirus, so we’re just going to have to use the Force even more for next year’s race to make up for it!

Despite Disney being currently closed, you can still get a peek at what’s still happening behind the scenes.

Bringing us even closer

When Star Wars: The Rise of Skywalker was released in December 2019, I was invited to a premiere at Disney Springs and allowed to bring a guest. Obviously, I brought my dad. As we got settled into our seats, we reminisced about everything that had led us to that point. We watched the movie and saw C-3PO take one last look at his friends, Rey saved Kylo Ren, and General Leia Organa fought for her son. At that moment, I began to realize that Star Wars embodied so many of the characteristics I saw in my dad: the selfless sacrifice to help me however he could, the endless amounts of love, and the joy that comes with a job well done. 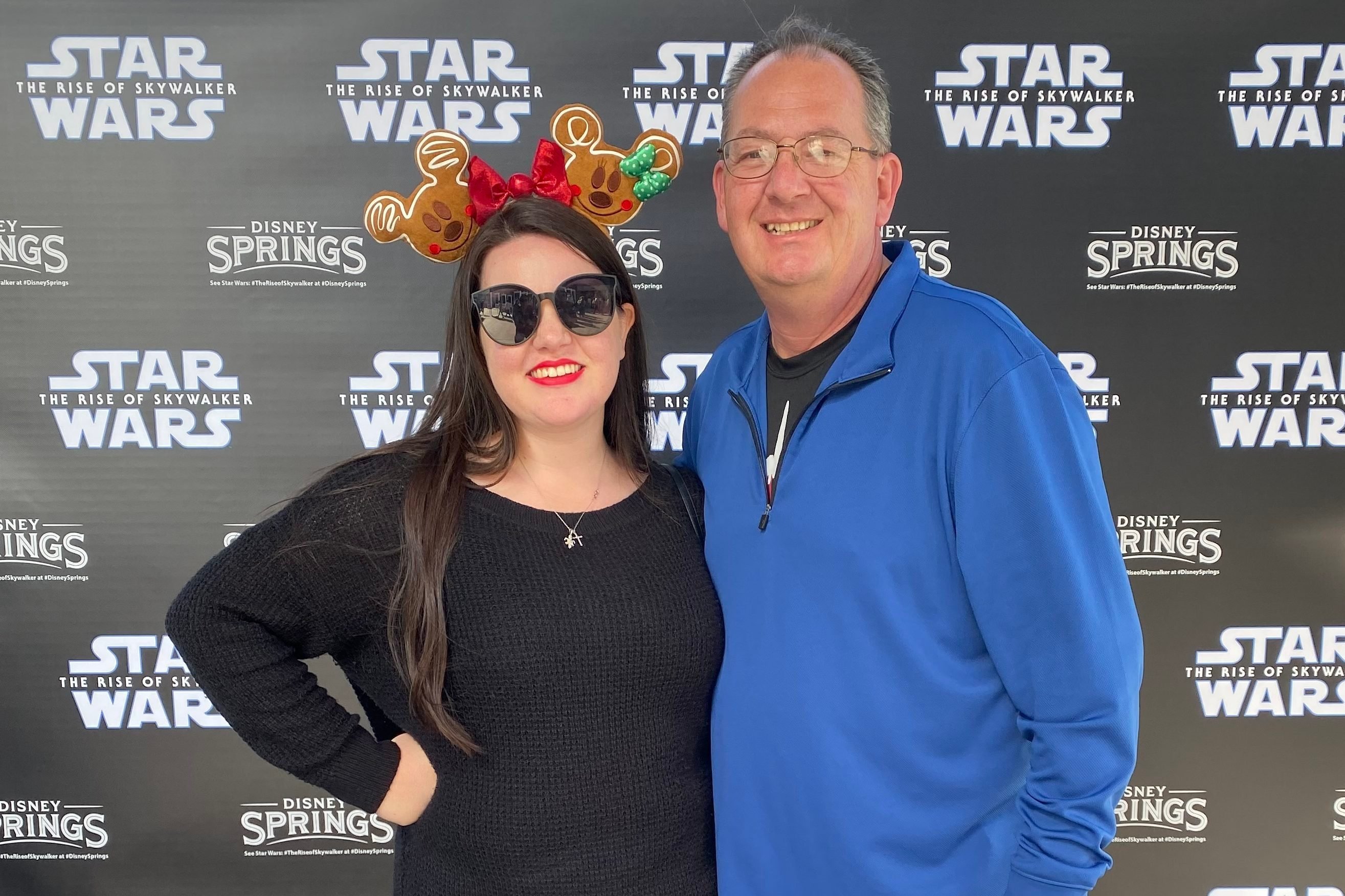 That trip had another surprise in store for us—and our relationship. The morning after the premiere, I was able to bring my dad to be among the first to experience a new iteration of Star Tours at Hollywood Studios and the recently opened Star Wars: Rise of the Resistance (one of the amazing theme park attractions you’ll want to see when life gets back to normal). I loved giving my dad the gift of being able to see all of this first; not many people get to experience that thrill. After we escaped the clutches of Kylo Ren and the First Order and were welcomed back to Batuu, my dad couldn’t speak for a few minutes. He loved it! It was also the moment that really made him understand what I’d been talking about for months and why I do what I do for a living. It took Star Wars to make that happen.

The next chapter of our saga

When 2020 rolled around, my dad and I set out on a new adventure to watch all of the Star Wars movies and series in story order, starting with the first three episodes, the animated series The Clone Wars and Star Wars Rebels, and then eventually making our way back to The Rise of Skywalker. Currently, we’re rewatching The Mandalorian. After all of this TV time, we’ve become self-proclaimed experts and have some pretty nerdy conversations at the dinner table, which my sweet mom tolerates for a few minutes each night. We even discuss Star Wars facts and theories, including some of these 14 Star Wars facts everyone gets wrong.

For the past five years, Star Wars has brought my dad and I even closer than we were before. And it all started a long time ago in a galaxy not so far away when his grandpa took him to see the original film. If my great-grandpa could see what that one moment turned into, I bet he would think that was money well spent.