For World Turtle Day on May 23, take a look at adorable baby turtles from around the world. 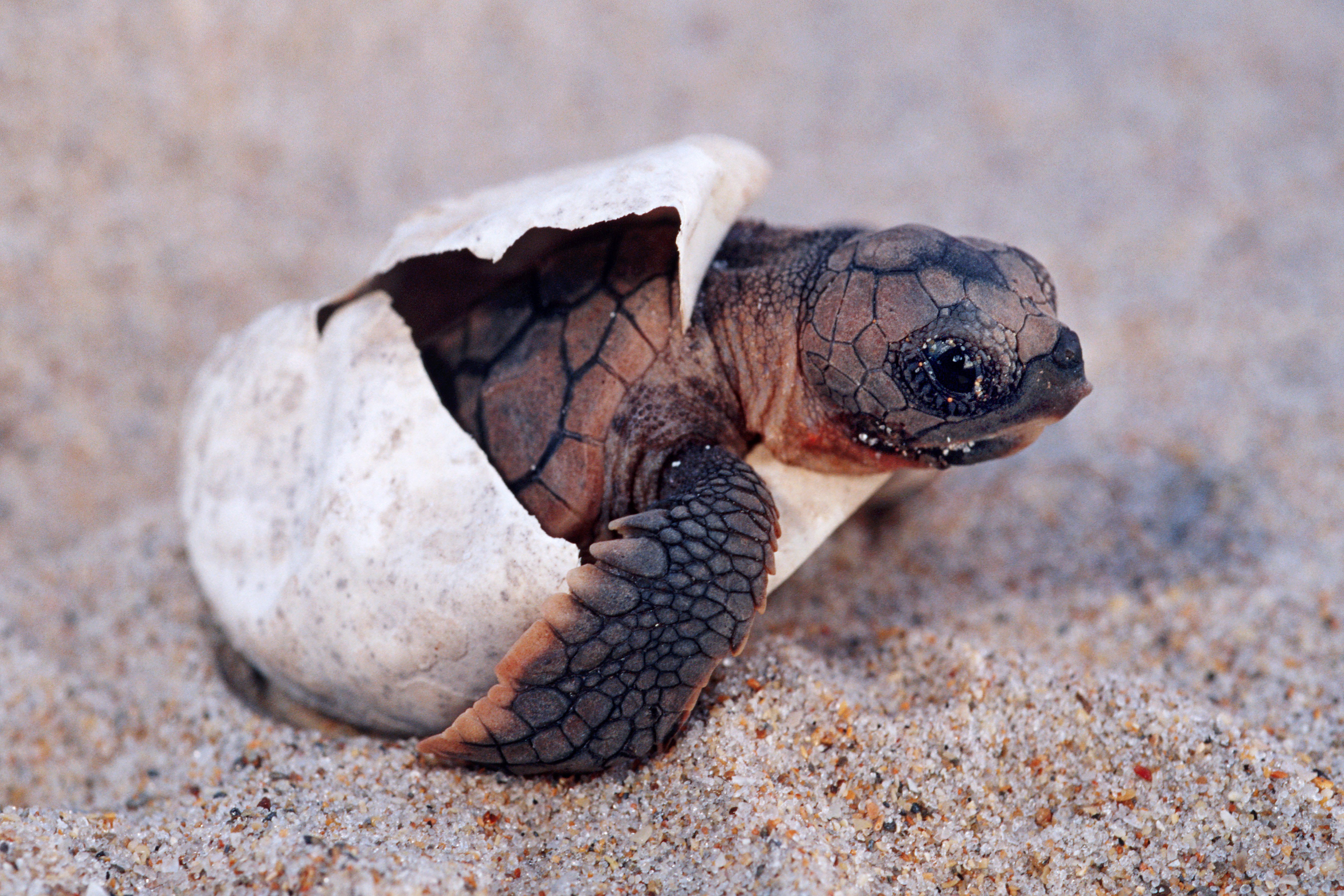 There are about 200 species of turtle—including those that live only on land (better known as tortoises), those that live both in and out of the water, and those that are aquatic and come to shore only to lay their eggs. These ancient creatures have their origins in the Triassic period, but these days, everywhere they plod or paddle, they are in trouble, with half of all species threatened with extinction. Known scientifically as a group as Chelonia, their populations have been decimated by habitat loss, the pet/medicine/grocery trade (for freshwater and land turtles); and fisheries by-catch, coastal development, pollution, and climate change (for sea turtles), according to State of the World’s Sea Turtles (SWOT). Below, we’ve rounded up baby photos of turtle species from around the world. One look at their sweet, otherworldly faces should be all it takes to convince you they’re worth preserving in the wild. 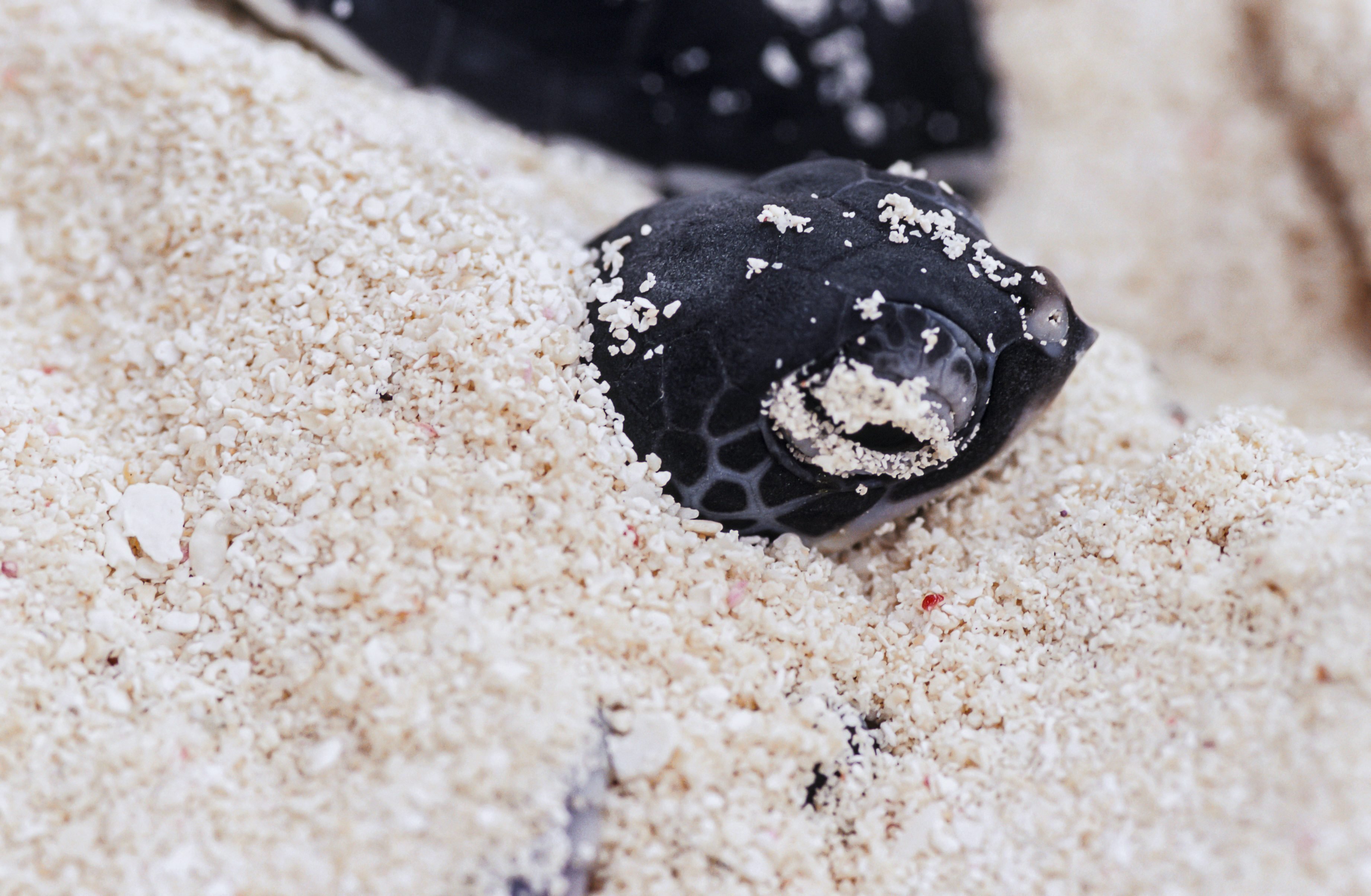 This baby green sea turtle hatched just this past April on a beach in North Madagascar in the Indian Ocean. Only 2 percent of hatchlings survive when—and if—they reach the ocean if they aren’t picked off by predators en route to the water. Eggs in a nest hatch within days of each other, as the Monterey Bay Aquarium reports, to “[increase] their odds of making it past hungry mammals and birds of prey.” Hatchlings spend up to seven years floating amid the algae, munching on seagrass and jellyfish till they bulk up to some 400 pounds, then surfing out across the ocean to find new habitats to forage in. Native to coasts off 140 countries, green sea turtles are endangered or threatened in all of them. It’s not only animals that are in danger of disappearing; these 14 breathtaking places may also be gone within your lifetime. 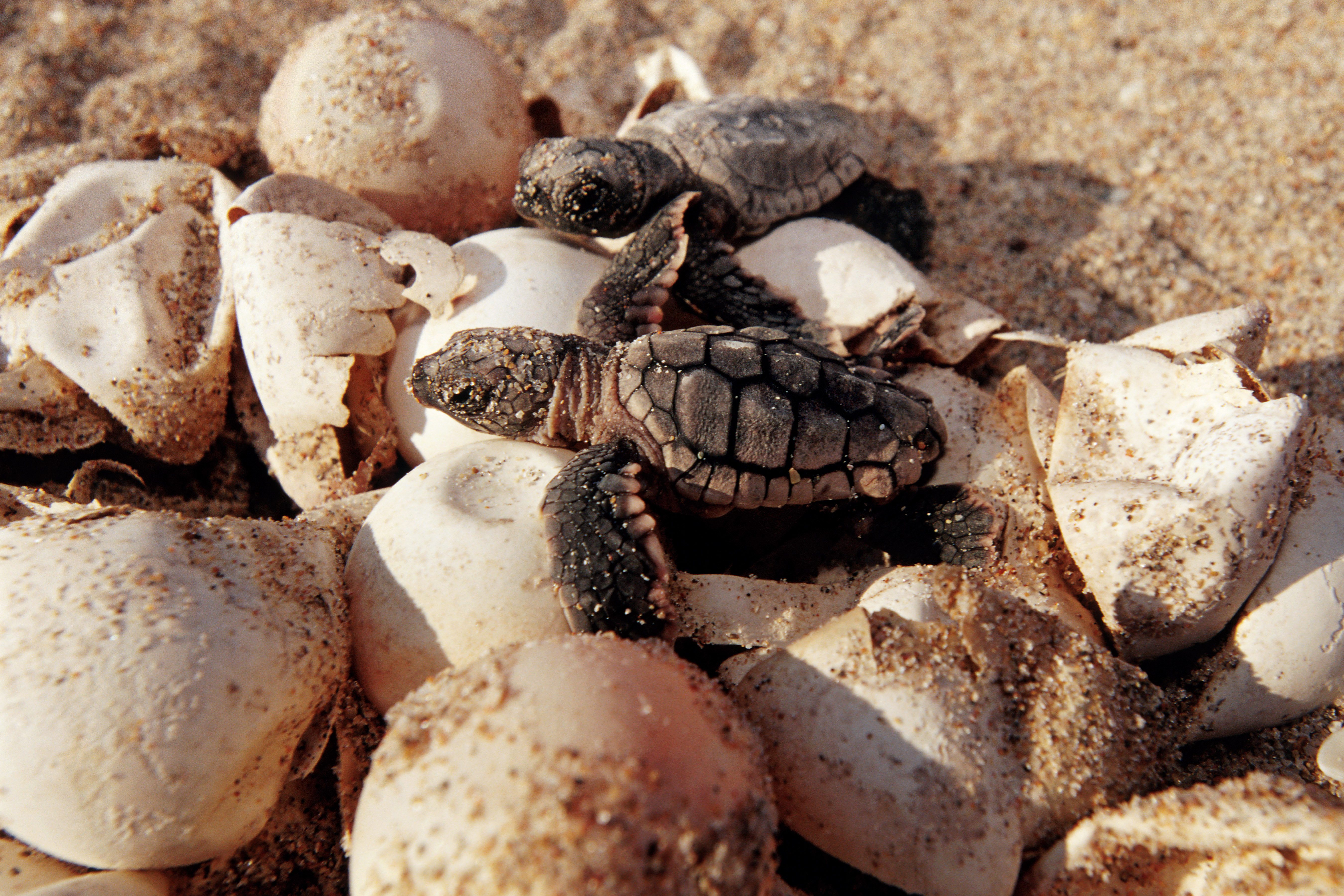 One of seven species of sea turtle and the largest of all turtles that have hard shells, highly migratory loggerheads are listed as vulnerable, with populations decreasing worldwide. This is a double tragedy—one for the animals themselves, and the other for the myriad species that depend on loggerheads to help maintain their ecosystem. As a keystone species, loggerheads feed on invertebrates, “whose shells pass through their digestive systems and, upon excretion, fall[ing] back to the bottom of the ocean for other animals to eat as a calcium source,” reports National Geographic. “Predators also rely on loggerhead hatchlings for food, while more than a hundred species of animals—including barnacles, crabs, and algae—live on their shells.” These 14 beautiful animals could also disappear in your lifetime. 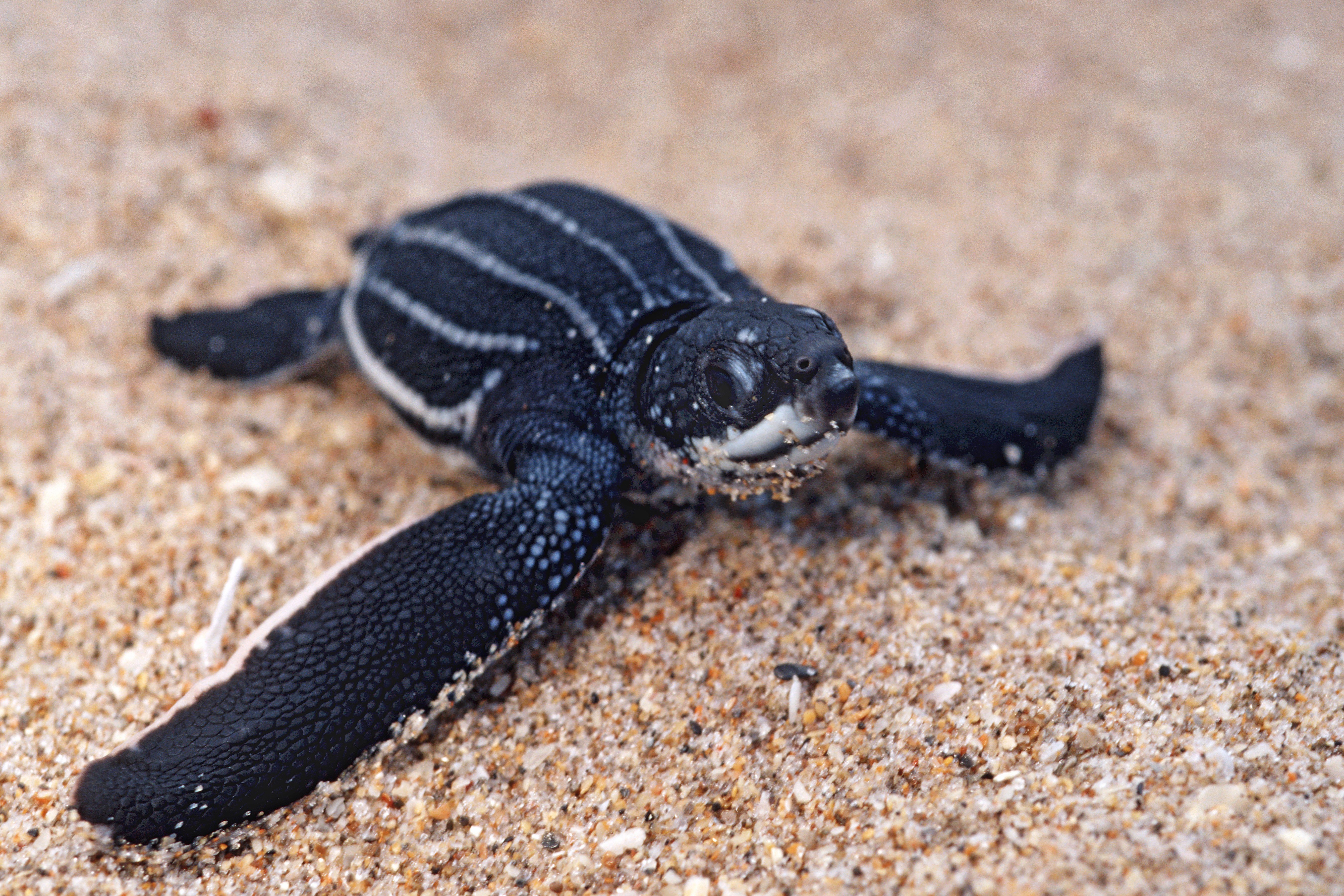 Although hatchlings start out tiny—two inches long—leatherbacks are the largest of all turtles and adults can grow to five and a half feet and 2,200 pounds. They swim 10,000 miles a year as they forage and circle back to their home beaches in order to lay nests full of 100 eggs—something that happens only every two to three years; and they can dive to depths of 4,000 feet. Endangered and still declining in numbers, these amazing animals are also the only sea turtle species that has no scales or a hard shell, according to NOAA — hence their name, a nod to their “tough, rubbery skin.” These 12 wild animals went extinct in 2019. 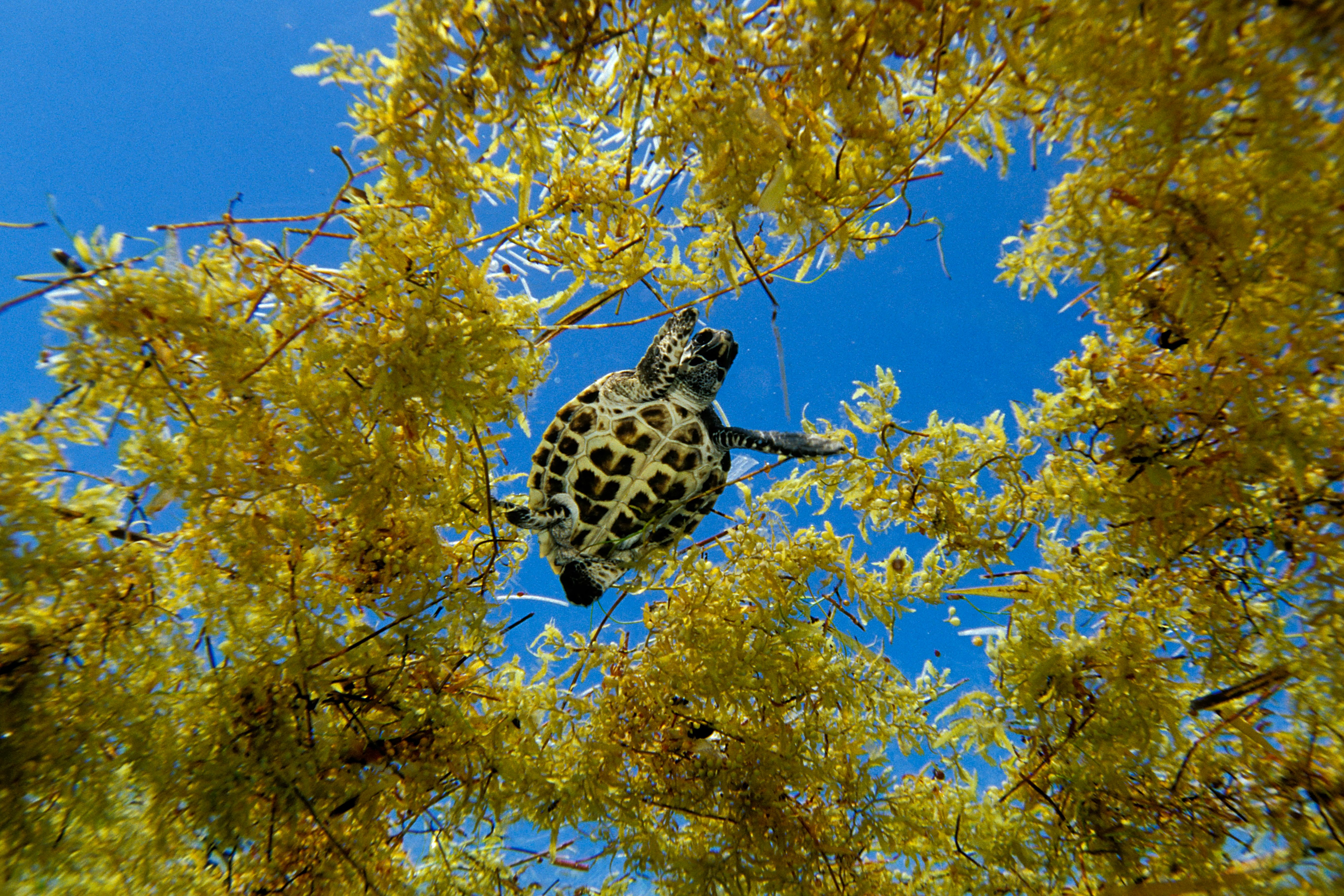 Native mostly to coral reefs in tropical oceans, hawksbills are named for their pointy beaks—yes, beaks!—which they use to prod tasty sea sponges out from underwater reef crevices. This not only keeps hawksbills fed, but it also provides some much-needed environmental maintenance, opening up the reef to other foraging denizens. Hawksbills are much smaller than their leatherback cousins, growing only to 35 inches and 150 pounds. Nevertheless, thanks to what the World Wildlife Federation calls the “distinctive pattern of overlapping scales on their shells” which make them look tortoiseshell-y, they are a highly prized commodity and as a result, critically endangered. Other species of turtles are some of the longest living animals in the world. 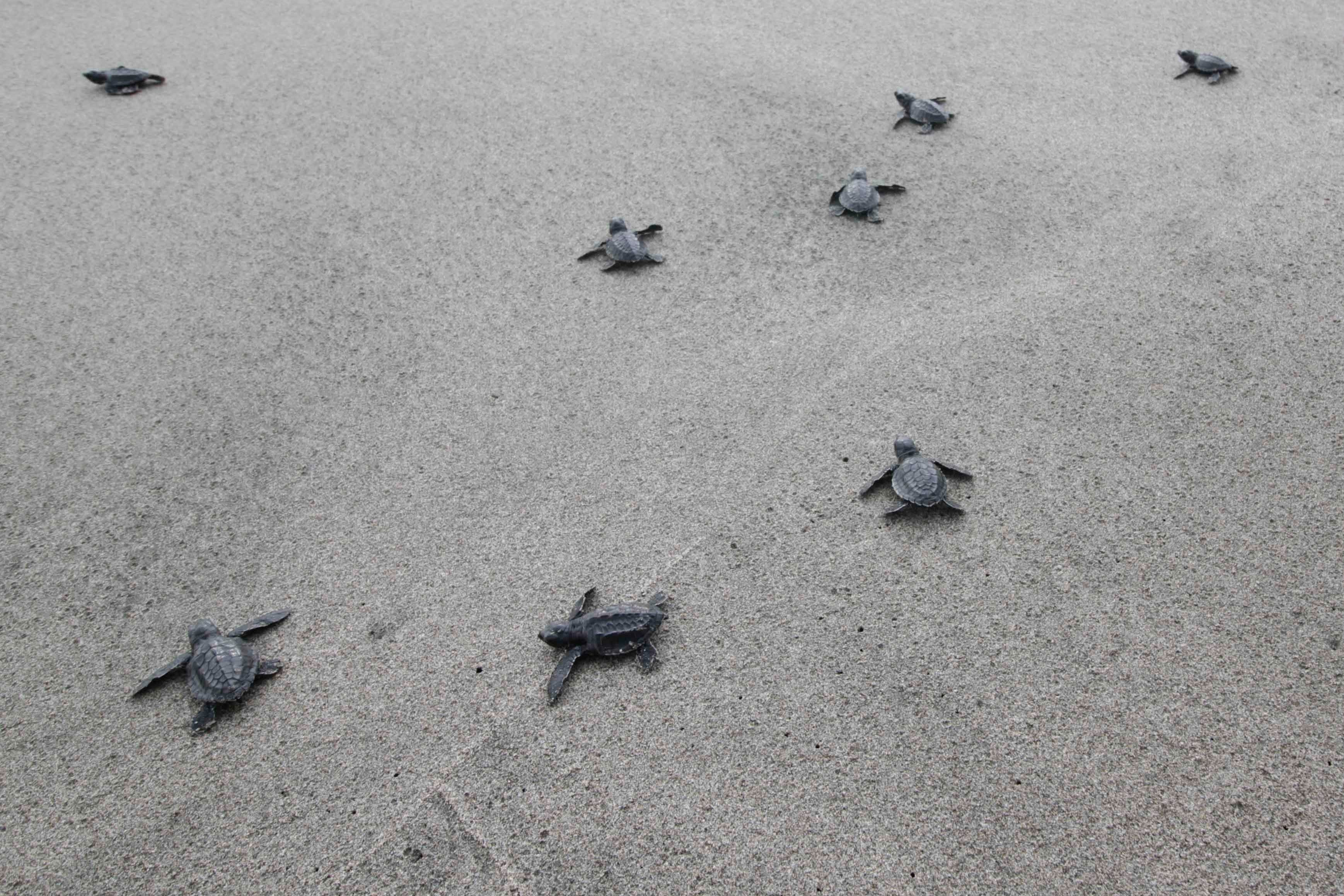 The world over, conservation efforts take place to help vulnerable sea turtle hatchlings make it into the waves without being eaten. This holds true for newborn olive ridley sea turtles as well, seen here in Aceh, Indonesia, where a sea hatchlings release program uses education to attempt to eradicate the island’s illegal turtle trading. At 100 pounds full-grown, these diminutive Chelonia “use the wind and the tide to help them reach the beach” to lay their eggs, reports National Geographic, a sometimes three-times-annual occurrence in which thousands of females mysteriously manage to gather together all at the same time in the same place. Olive ridleys munch on hard-shelled critters like snails and crabs—and in return, are considered a delicacy by certain sharks. 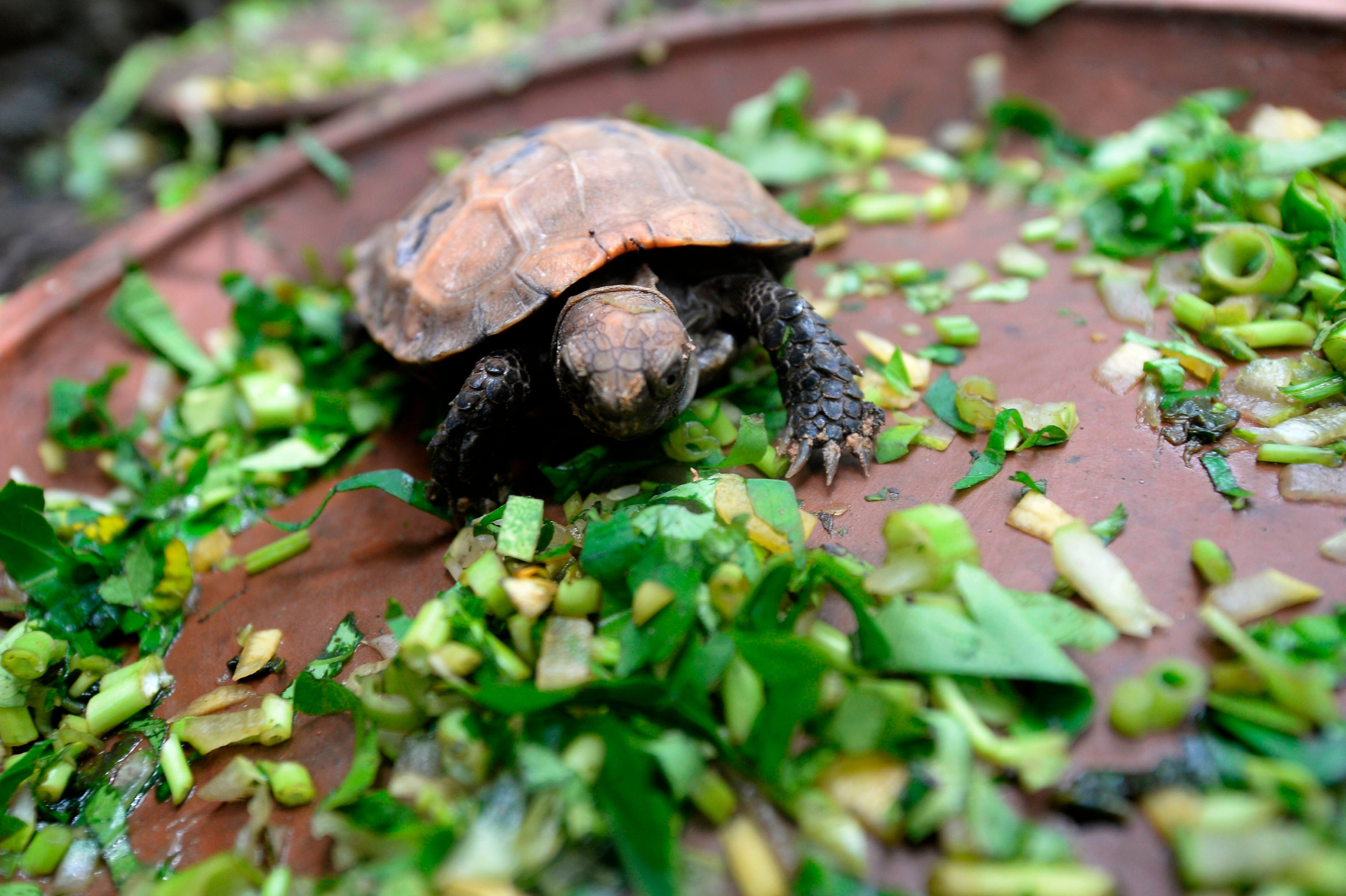 This largest of all tortoises in Asia is critically endangered—which is why you see one of 41 newborns, pictured here at a forest reserve at the Turtle Conservation Centre in Rajendrapur in Bangladesh, getting the chance to takes its first steps in life in a protected box. Native to tropical forests, at elevations up to 4,500 feet, Manouria emys has already gone extinct in the wild in Singapore and its fate is unknown in Brunei Darussalam. These big boys are known for their domed shells as well as their elaborate courtship ritual, with the male bobbing his head at a potential mate, following her around, then mounting her if she slows down for long enough, reports Animal Diversity. Discover more of the biggest living animals in the world. 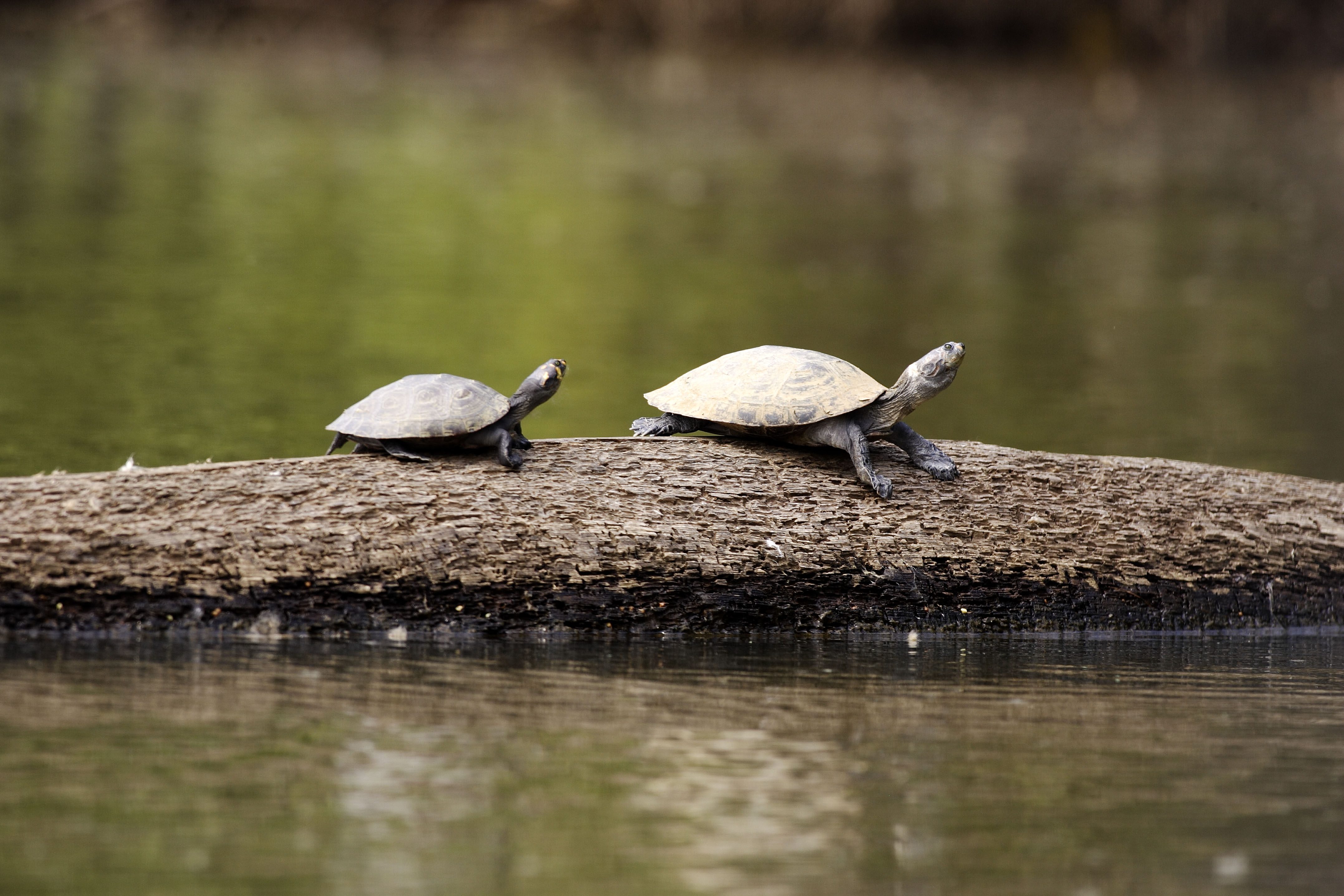 “Before indiscriminate harvesting of eggs took its toll, the vast white sand beaches along the Amazon [River] used to blacken when countless thousands of [r]iver [t]urtles crawled out to dig their nests,” reports Green Tracks, an Amazon tour site. Those days are over, and river turtles are now listed as vulnerable. (Another threat, piranhas, pictured here along with a baby turtle in the Amazon in Brazil.) Growing to about 27 inches long, these freshwater reptiles can live up to 70 years and they have an unusual feature: they are “side-necked” and can’t retract their heads into their shells, according to the Smithsonian’s National Zoo. These 17 animals can only be found in the Amazon rainforest. 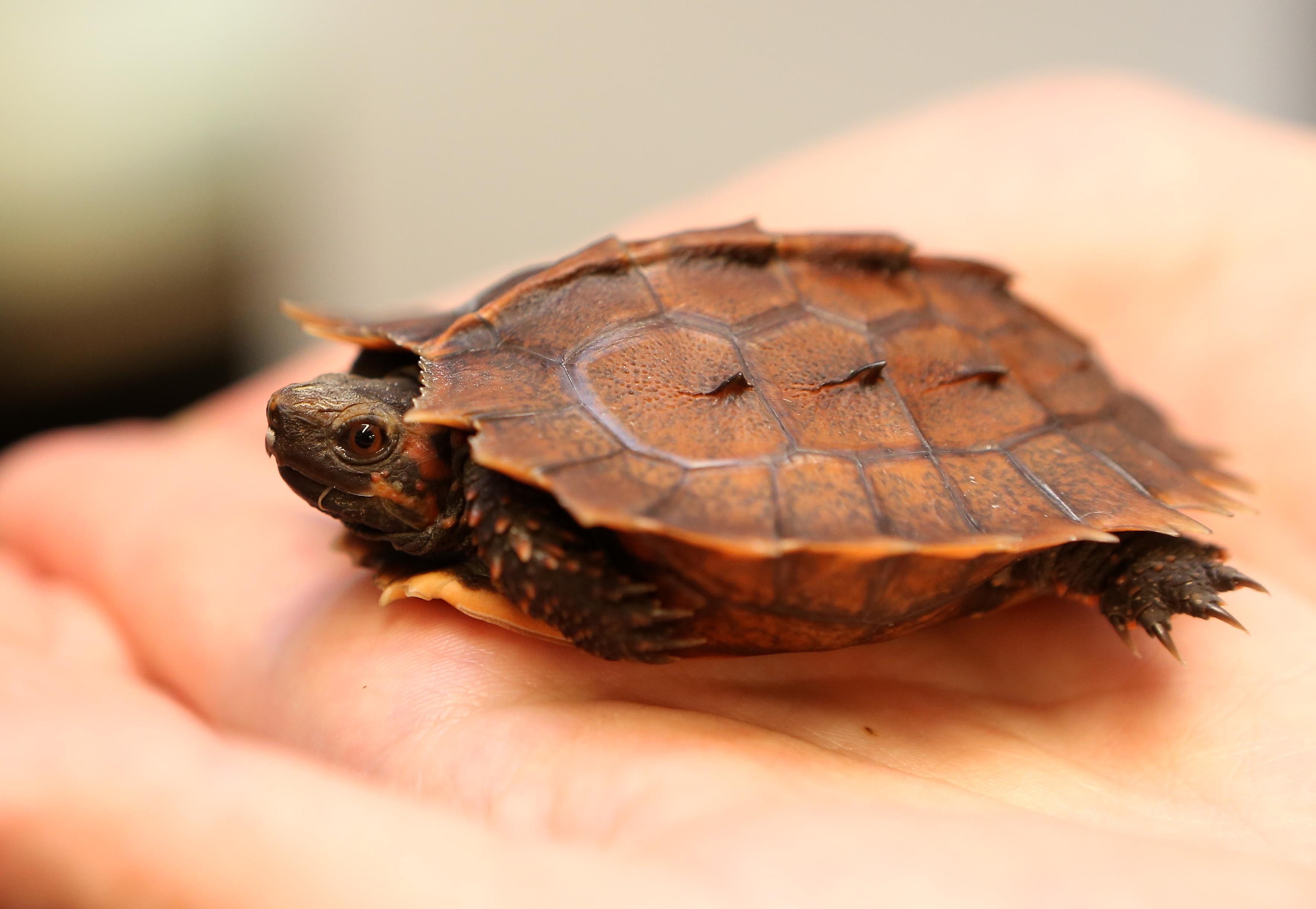 This endangered native of Asia has scutes fashioned into spines—especially sharp when it’s young and disappearing as it ages—which is a cool evolutionary trait that’s really good at convincing potential predators not to eat it. Active at night in the forests where it burrows under the leaf litter for camouflage, the spiny turtle eats bugs and fruit and leaves but other than that, very little else is known about its ecology, according to Turtle Conservancy. Shown here, the first spiny turtle to ever be bred in the United Kingdom, at the Chester Zoo. 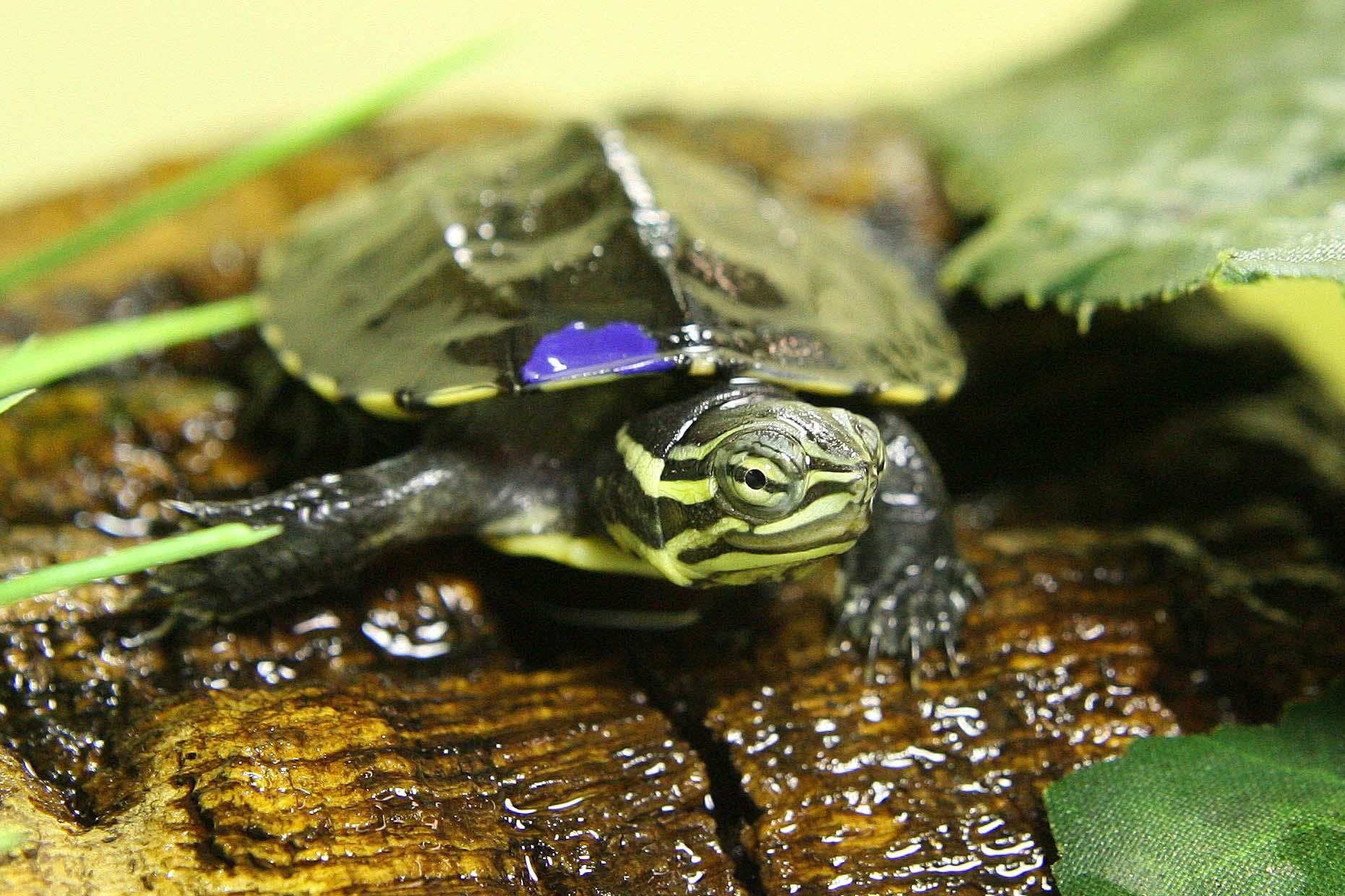 One of the 25 most endangered turtles in the world, the Annam leaf turtle comes from only one small, wetland region of central Vietnam and until recently, hadn’t been spotted in the wild for 65 years, according to the ZSL London Zoo. It’s listed as critically endangered, which is why efforts are afoot to raise it in captivity (seen here, another first baby at the Chester Zoo in the United Kingdom) then attempt to release it back into its native habitat. It grows to a diminutive 6-inches long but has what the Buffalo Zoo calls “mollusk crushing jaws”—even though no one’s quite sure what it eats when left to its own devices. Learn about 16 animals that came back from the brink of extinction. 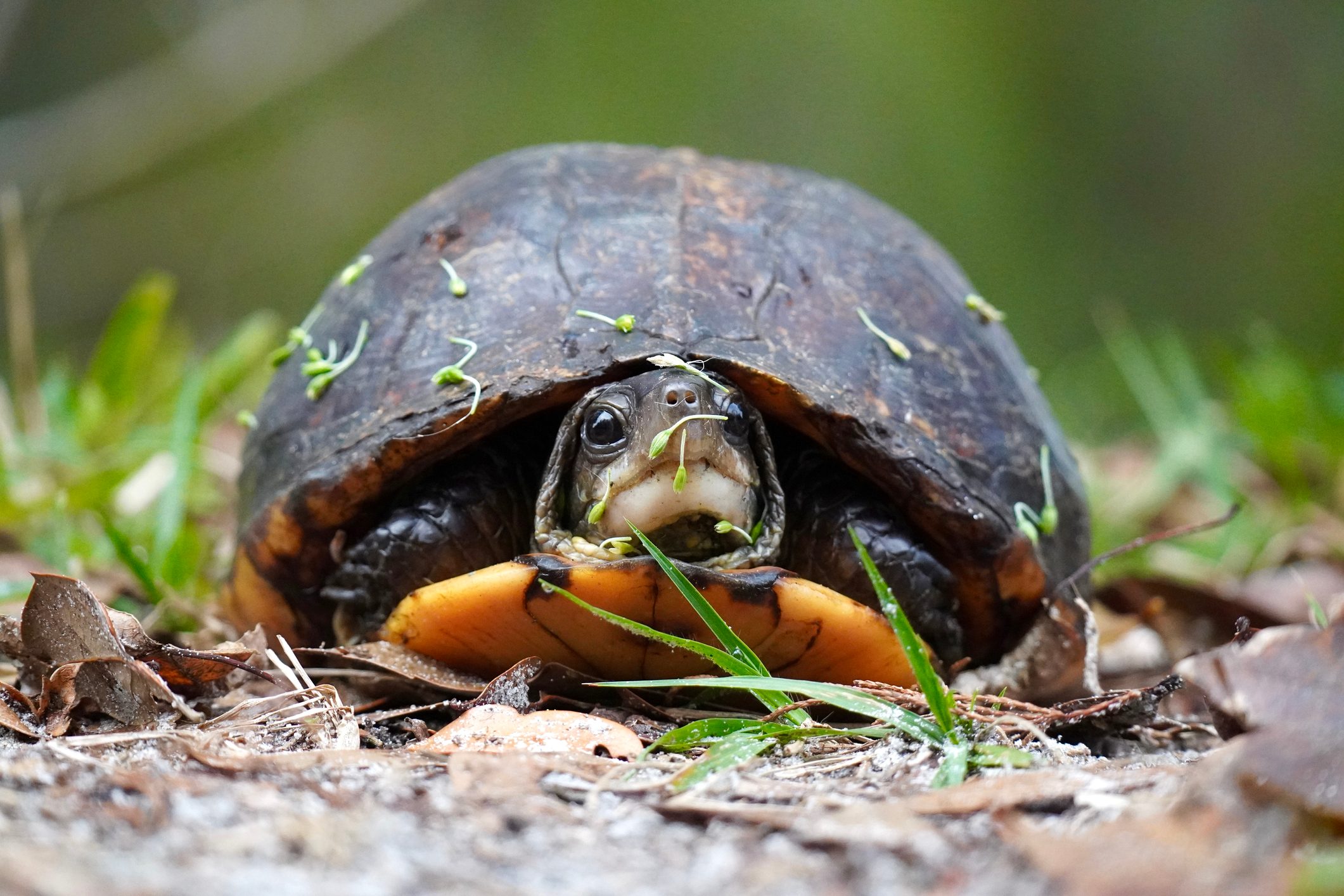 This land-only dweller, native to the American southeast, is listed by the IUCN as vulnerable, thanks largely to habitat loss of the longleaf forests where a mere 700,000 of the species remain (sound like a lot? There were three times that number 100 years ago). National Geographic reports that these long-lived not-so-giants (70 years, 10 inches, 12 pounds) are pretty mild-mannered…until it comes to mating, when “males become aggressive when fighting over a female and will push and ram into each other.” Largely solitary, gopher tortoises get their name from the deep burrows they dig to sleep in and lay their eggs (unwisely) at the entrance to. Amazingly, it’s possible these extinct animals could be resurrected one day. 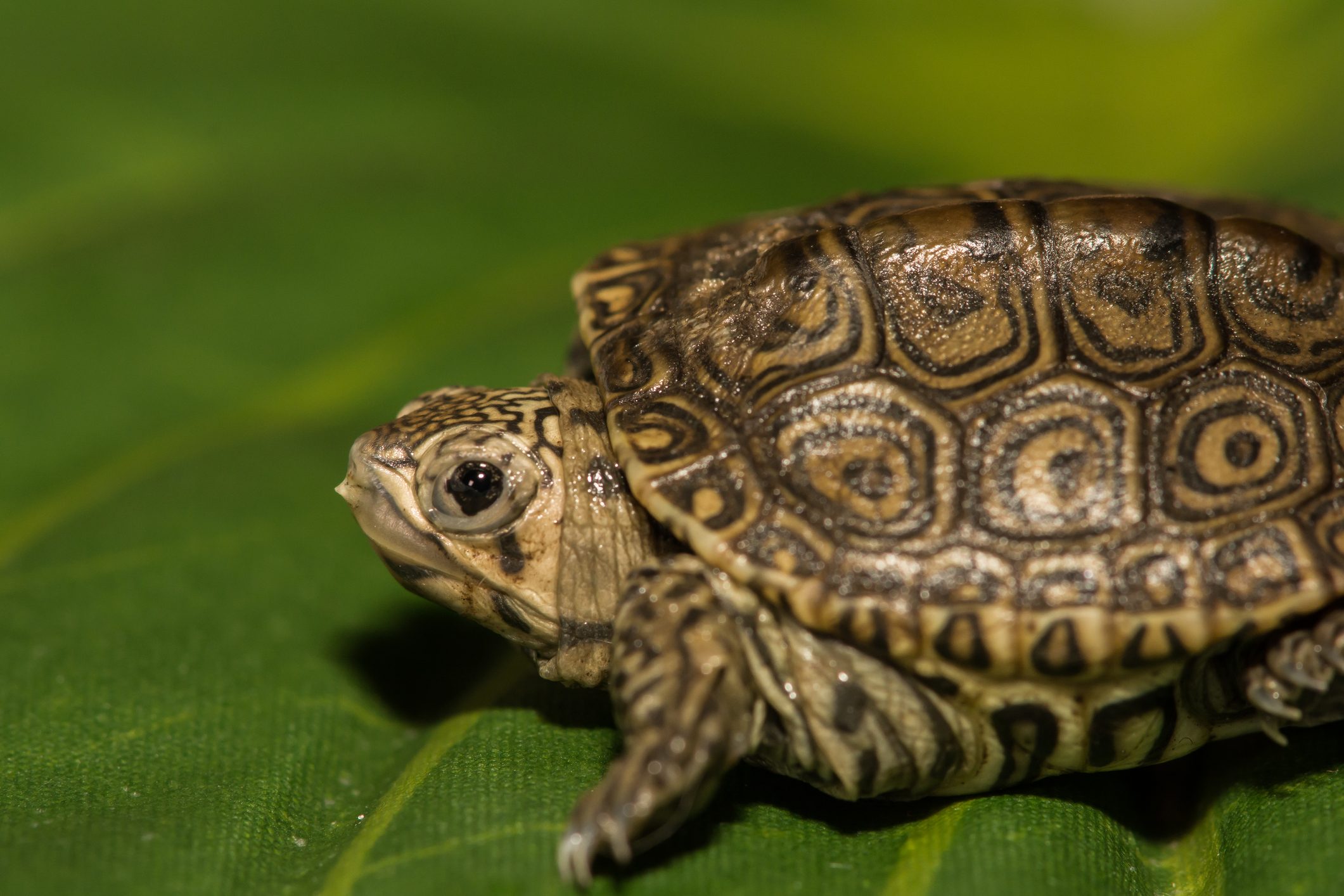 This iconic species of America’s northern coastal salt marshes likes to swim in brackish water and eat almost anything: shellfish, insects and worms, plants, algae, even carrion, according to National Geographic. Despite all this adaptability, it’s listed as vulnerable—through no fault of its own. In fact, one of the leading causes of diamondback deaths is accidental drowning when the turtles become ensnared in blue crab traps—leading to some fisheries making the use of terrapin-releasing traps mandatory. Find out 15 simple ways you can help endangered animals from the comfort of your home.